The Many Deaths of Laila Starr #4: Fated Meetings

The Many Deaths of Laila Star #4 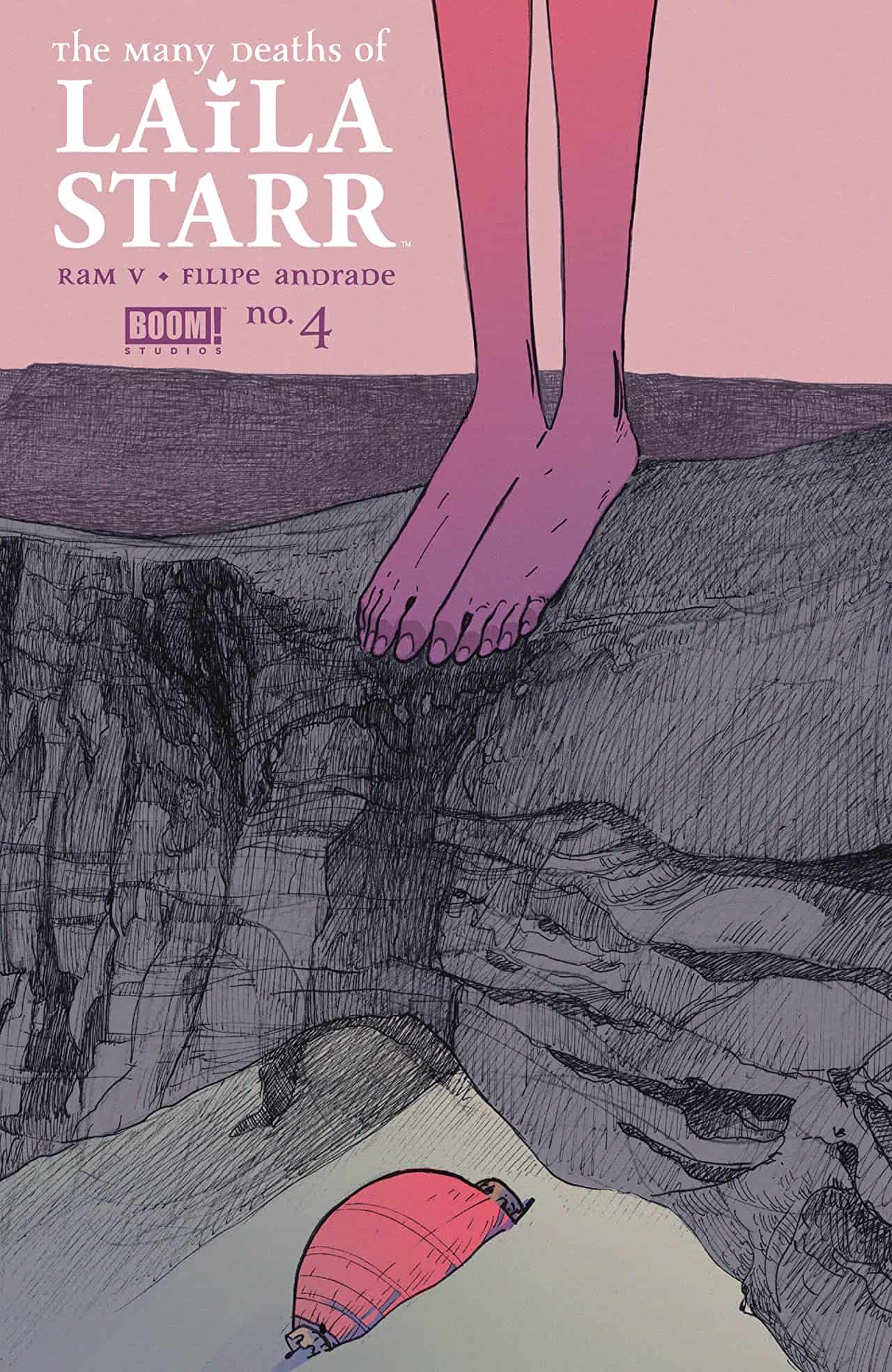 A moment of reckoning is on the horizon as former death goddess Laila Starr knowingly seeks out Darius Shah for the first time. She hopes to convince him to change paths and turn away from the pursuit of immortality, but she may achieve the opposite effect in the end.

The Many Deaths of Laila Star #4 opens and there is Laila, fresh from her latest resurrection, searching the streets of Mumbai for the man whose as yet undone work has made her redundant in advance. That man is Darius Shah, and he has proven both difficult to find and difficult to avoid. In each issue of TMDoLS to date, Laila has encountered Darius… however, aside from a brief encounter with him as an infant, she has never managed to recognize him while she had him in front of her.

It hadn’t occurred to me until this issue but every time Laila enters Darius’s life, she comes in the wake of loss, and every time she meets him, she loses her life one more time. There’s something to be said for the elusiveness of this “relationship” of sorts – these two people whose life’s paths are so dependent on one another and their inability to recognize each other even when they’re looking right into each other’s faces. Instead, their encounters are here and then gone, not unlike life itself.

This issue is a little different in that regard, but before Laila can face Darius again, she first encounters the living spirit of a Chinese temple – the only one left in Mumbai – which has long been tended to by Wei, the last remaining Chinese Mill worker immigrant in the city. Now, today, for the first time, the temple’s caretaker hasn’t come, and…

…look, this series can be a difficult nut to crack. Sometimes you can see what’s coming – feel the pull of the inevitable – but then you turn the page and the revelation still hits you like a blow to the chest even though you already knew what you’d find. For beings or spirits like Laila Starr’s, or the temple, mortal life is fleeting and yet time seems to stand still – Wei is a child, then he’s an adult, and then he’s an old man, and the temple barely feels that time moving because of course it is a building and it doesn’t age. Despite her relatively new mortality, Laila’s experience of Darius’s life is not dissimilar – in her case mostly because she keeps dying for years or decades at a stretch.

These things hit us, the readers, differently. We know how long it takes to go from childhood to seniority, and it’s bizarre to feel how short that life is, in the scheme of things. It can make you feel that human lives are too short to be significant, but then… how unimportant could they be if their loss can change the course of reality the way Darius’s losses ultimately may?

Every issue I’m at a bit of a loss to explain the experience of reading Laila Starr. Things come to mind like, “it’s a bit like having your insides read to you.” That doesn’t really make sense but at the same time is absolutely the experience I, personally, have. It is a contemplation on life via death, and if you’ve ever experienced the death of a loved one, every issue has that feeling baked into it. The anger born from a loss that “shouldn’t” have happened. The sudden undefinable disappearance of something or someone without whom you would have sworn the world could never spin. The end of a constant presence without which you aren’t sure you can function properly.

Ram V’s writing hits home in a way that very few books that weren’t published under the Vertigo imprint in the 90s have ever managed to do. What’s more, by abandoning realism and the smooth, clean styles and realistic coloring favored by most mainstream books, Andrade and Amaro are able to channel the mythic while still conveying an intensity of emotion that frankly takes my breath away.

There’s one more issue to this remarkable story, and I already know I’m going to miss it. Although I think I’ve choked up every time I’ve opened this book so maybe I should be glad about that.

Ram V and Felipe Andrade have delivered another near-perfect issue of this near-perfect series... and I’m only adding the “near” because perfect is a big claim. Laila Starr continues to bring a mythic resonance to the questions of death, grief, and the fleeting nature of life.

The Many Deaths of Laila Starr #4: Fated Meetings