The Many Deaths of Laila Starr #5: What lies beyond the edge?

The Many Deaths of Laila Starr #5 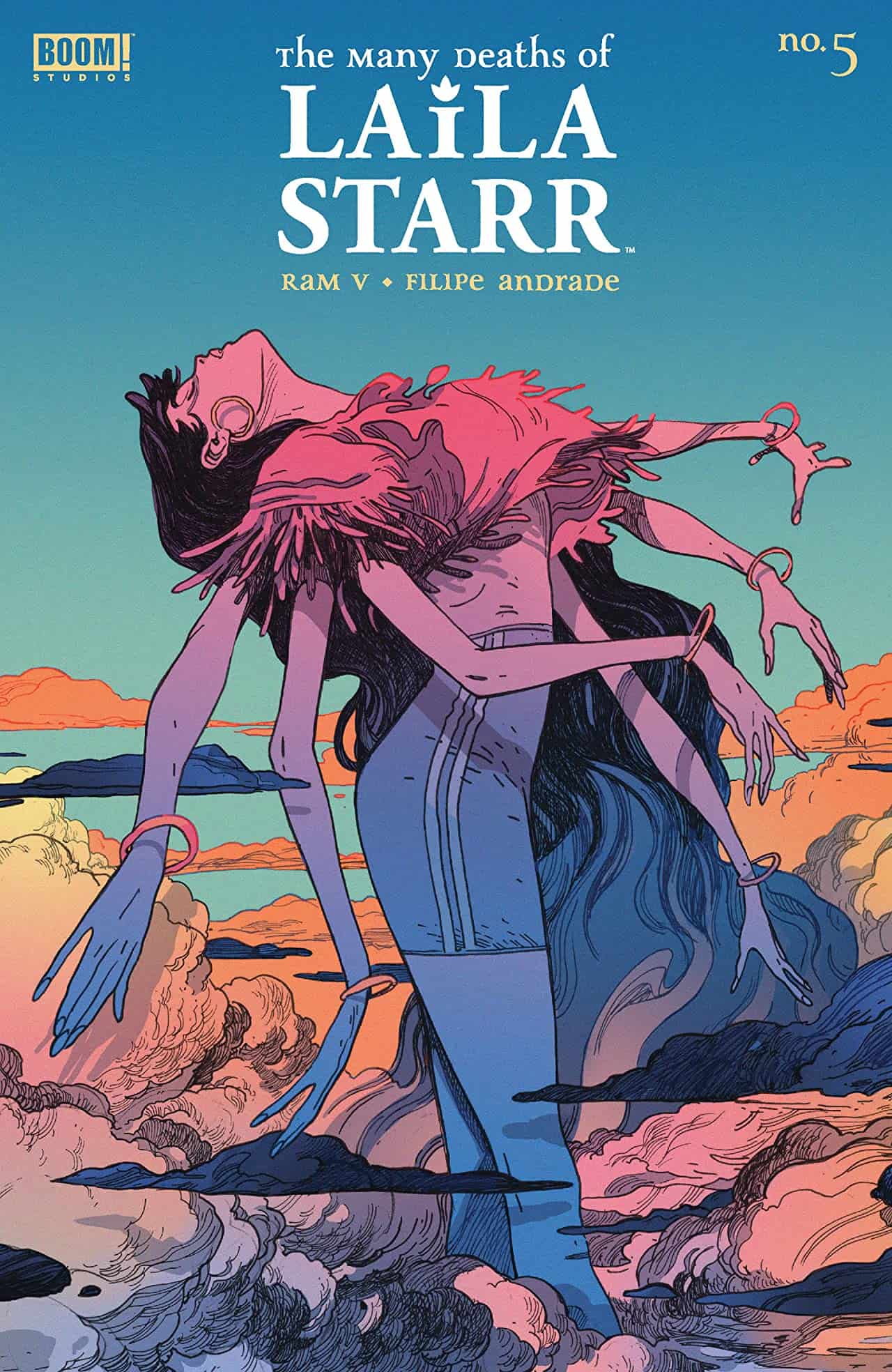 It has been many years since Laila’s most recent death, but not very long at all since she returned to life. Darius Shah, the man destined to cure death, has grown old now, and is living in Panjim. Known as a caretaker of last resort for sick or injured animals, he has just taken in an injured puppy and now he aims to give the dog its their best chance at recovery. Meanwhile, Laila Starr has found herself alive again, buying a poetry book in an airport, preparing.

Now, as our tale draws to a close, Laila Starr meets with Darius Shah one more time.

There is a moment, at the end of The Many Deaths of Laila Starr #3 that serves as a thesis statement for this entire series. It comes and goes quickly, with little revelry, much like the lives that come and go over the course of the series. Even so, it felt like something significant even when I read it the first time.

In this scene Laila, the recently unemployed embodiment of death, is sitting with her friend Pranah, watching the water. Now Pranah is the god of life, and he has been pulling strings to get Laila back after her many random and unfortunate deaths… a fact that’s begun to wear on the other gods. But Laila believes they’ll never really be able to stay angry with him because, as the god of Life, all the world is an ode to him. As he says this, we see children playing, birds feasting on fish.

Then Pranah says, “I’m nothing without you.”

I assume you know this book’s premise by now – otherwise, why would you be reading about the fifth and final issue? But just in case, here’s the crash course: a morTal named Darius Shah is born the same day a college-age girl named Laila Starr dies. Meanwhile, because Darius Shah is destined to conquer death – to invent immortality – the god of Death is fired from her position and reborn into the body of the recently deceased Ms. Starr. Since then she has been seeking Darius out, encountering him in unexpected places and at unexpected times, and inevitably dying shortly after their meeting… only to be resurrected by Pranah some years later and start again.

It’s an examination of life through the prism of death, or vice versa, perhaps, with Laila’s death and rebirth cycle serving as a tool in which to examine how quickly time goes by while remarking on the life-death cycle. Laila arrives, meets Darius as a baby, and next thing you know he’s a child, and then a teenager, and then an adult, and finally, now, an old man. It resonates with us, human beings for whom a 90-year lifespan is both exceptionally long and all too short. Life disappears between our fingers, and at times it does feel like you blink, and then it’s gone. And in that way we are all Darius Shah – the boy who loves and loses and grows old, whose life is in many ways defined by the eternal presence of death and the need to grapple with its ripple effects. But we are also Laila, who feels as though 50, 60 years ago was only yesterday; Laila, who watches the world change around her although she, herself, still feels the same.

Of course, she isn’t the same. Life has changed her, formed her from an abstract into a human – or something like one – complete with dreams and regrets and foibles and strengths. It’s appropriate. Every life is the same way. People experience things, they stumble, they make mistakes – but that doesn’t diminish their worth, their importance. Darius Shah was never an ideal person, after all – he was stubborn, and temperamental sometimes, and driven in all these imperfect ways – as is Laila, as are we all.

And that’s the point.

I’ve lost track of the number of times I’ve referred to the atmosphere of The Many Deaths of Laila Star as fragile. I’ve even lost track of how many times I’ve pointed out how often I’ve said that. But this is the last issue so I’m going to do it one more time.

This story, the world it’s created, is like blown glass – beautiful, fascinating, and easy to break. It exists as it is due to a delicate balance of story, art, colors – each different than the norm for today’s comics, and yet in harmony with one another. No book on the stands looks like Laila Starr – and no book that reads anything like it either, not even Ram V’s other (also phenomenal) work.

I’m going to miss this story, this work. Part of me wishes it could continue indefinitely. Yet it can’t because, as its thesis suggests, it is the book’s temporary nature that makes it so powerful, so precious.

Visually stunning, heartbreaking, inspiring, and poignant. The Many Deaths of Laila Starr is a masterpiece and I don’t say that lightly. If you’re anything like me, you’ll laugh and cry and resent the crying and then read it all over again.

The Many Deaths of Laila Starr #5: What lies beyond the edge?