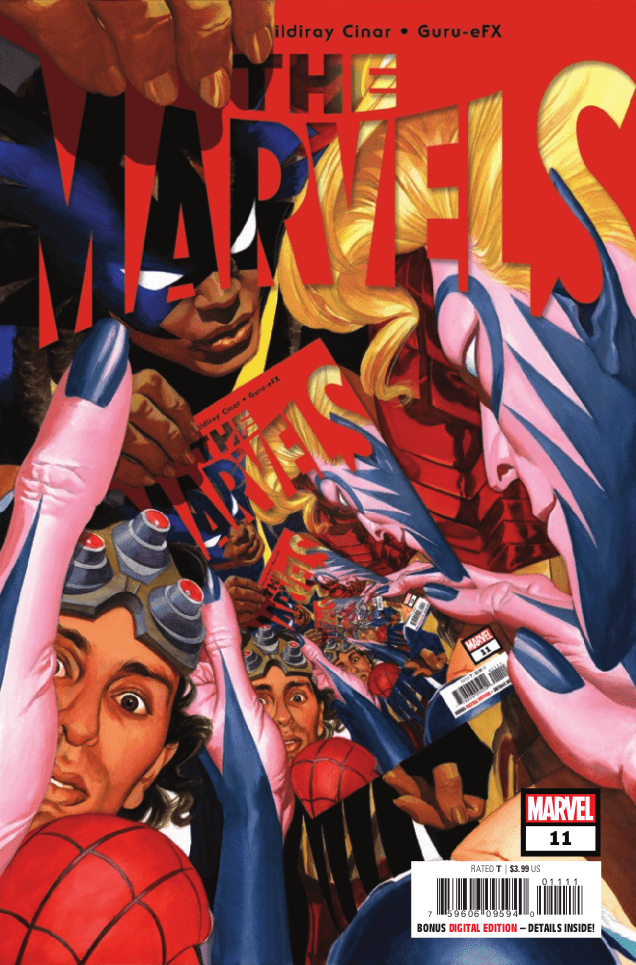 As the mishmash team come to terms with their otherwordly surroundings, they are given a literal storyboard of the very issue they have been gathered to resolve. But loathe as he is to spoon-feed his selected players Threadneedle does no less than offer them the answers to their questions, whilst giving them even more to think about. The very land that has been trying to destroy them is the very thing they are there to save. With the fate of the known universe in the balance, they must race to the finish to get back home. And Kevin has a vital part to play, simply by his ability to carry a wallet

This series has seen Kurt Busiek deliver a fitting love letter to the Golden Age of comics, and I’m here for it. Right from the start the inclusion of the original Vision (Aarcus) was a huge gamble in this mismatched bunch of characters, pitching him alongside current era Storm and Melinda May from Agents of SHIELD. And I really appreciated his inclusion. As for other main characters, such as Iron Man? I became less enthused by him over the last few issues and found him even more annoying and full of himself than the ‘real’ Stark. If such a thing is possible. His glib comments last issue were a little beneath him and seemed more to remind us it’s Stark beneath the armor, than any purpose or adding to the narrative. So I’m glad he had little to say this issue. Now Black Cat seems to be taking up the role of snarky sidekick, and it suits her better.

Kevin Schumer on the other hand is far more likeable. As the Everyman we usually see in the Marvels series he is our eyes and ears in the story. And as such our connection to what is happening. In terms of his adaptability he is less the Everyman than Paul Sheldon, John Mahoney or even Cindy Knutz, and much more hands on. Kevin proves to be more useful than his predecessors and as another unfamiliar addition such as Melinda May, or even Powder Keg, also more than one dimensional. Whereas they are known but little used characters in the main universe, Kevin is intrinsic to the story here and if Ace and Threadneedle deem him important enough to include him then he is clearly just as vital. Even if this issue all he did was act as financier. And I had to chuckle at the fourth wall breaks that littered the comic shop scene. 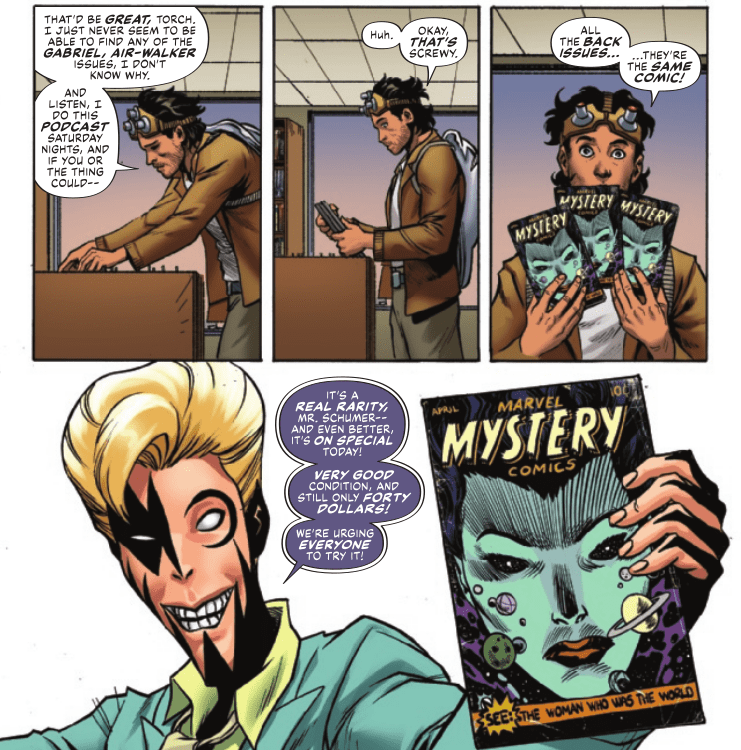 I also quite enjoyed Threadneedle and the David Bowiesque appearance also reminded me of the original New Universe Nightmask, Keith Remsen. His role seems to be similar to that of the Time Broker for the Exiles, or the Dungeon Master. Frustratingly vague and wont to slip out of view just when you need him. Another character I’m not so impressed with though is Ace. Although he is as slippery as Threadneedle, he isn’t as intriguing as he just seems to show up and not be of any use, other than to vouch for the much more dynamic and maniacal Threadneedle. As for the art this issue I have to say that Yildiray Cinar’s style worked quite well for me. His facial expressions all keenly match the dialogue and the intent of the characters and the action flows well. And I especially liked style change as we go into the story within a story of Shan-K’ang/Siancong. 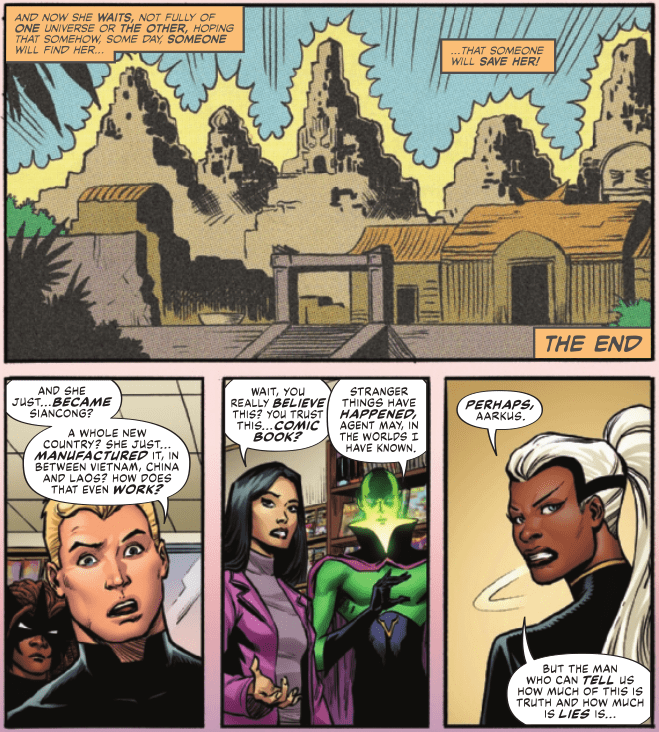 Even a little details of the worn page edges, which any collector of Golden Age comics is more than fully aware of. And I could almost smell the musty odour, which some avid collector actually sees as a bonus when buying their issues. The colouring also did a wonderful job of conveying the different ages of the story. The switch between the two panels as we return back to the present and the dilemma that the heroes face contrasts the subdued vintage colouring style perfectly, to the more modern edgy style, with more shading and a larger colour palette. And even with minimal colours as used during the entrance of the Kaaragga is bold, bright and brash and shows the positive threat that these characters are meant to bestow. And Yildiray imbues them with an almost crackling energy, as he does the ethereal Shan-K’ang. 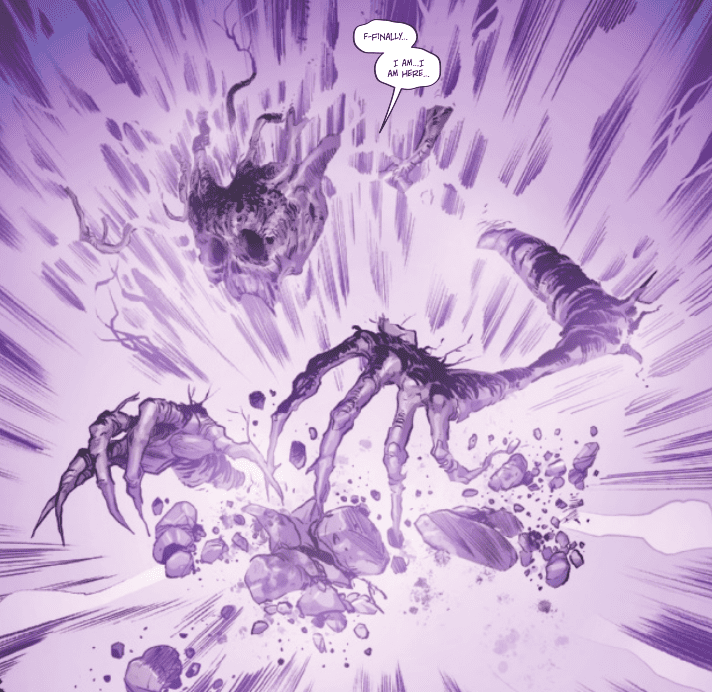 And of course the finishing touch of an Alex Ross cover is nothing to be sneezed at either. This alone would make me pick up this book, even without the engaging characters and fast paced scene change, as we witness the fun romp this team is on. But it is a perfect way to set the stage for the bold and fast paced narrative that takes place on the pages it adorns. And the peril and drama is not underplayed in either story or art, as the heroes try to stop the threat taking more than they are prepared to risk. 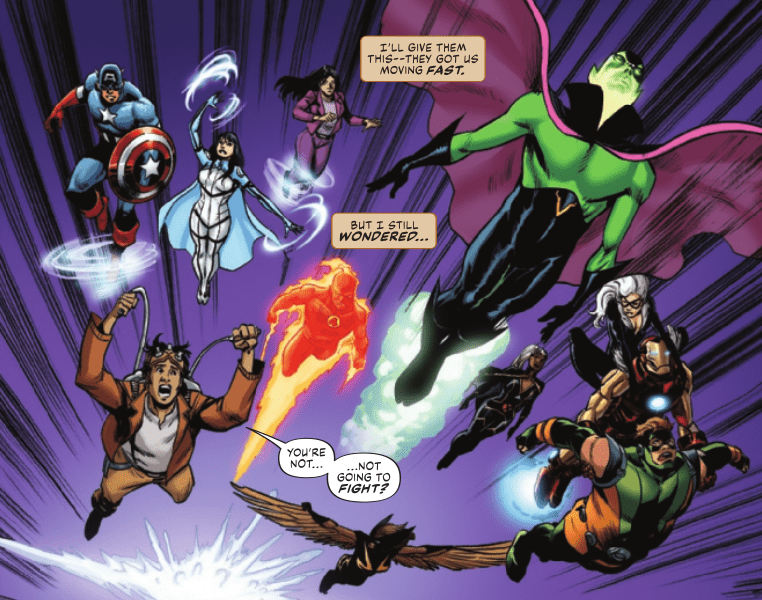 My only slight criticism this issue would have be to a certain extent the dialogue. In an ensemble book juggling it to give everybody something to say did make it a little bit difficult to be drawn into the story as compared to previous issues. This coupled with the increased pacing as we hurtle to the conclusion makes me worry there is going to be a lot to cram into the finale to get the right payoff. I myself am a huge fan of all that goes before this in the Marvels pantheon and I have a LOT to say about all the previous Marvels outings, as you can see here.  So if this chapter is to hold it’s own against that which has come before, it will need to pull out all the stops.

Overall I’m not as drawn in as I’d like to be this issue, compared to the previous ones. I’m hoping the curve ball thrown at the end will be something dramatic enough to hook me into the resolution next issue. Clearly it will need to be something special to answer all the questions raised, which is something slow building so far. It has been a long set up for a quick trip to Siancong, and I hope it finishes in a satisfactory way.