The Marvels #9: The War Against The World 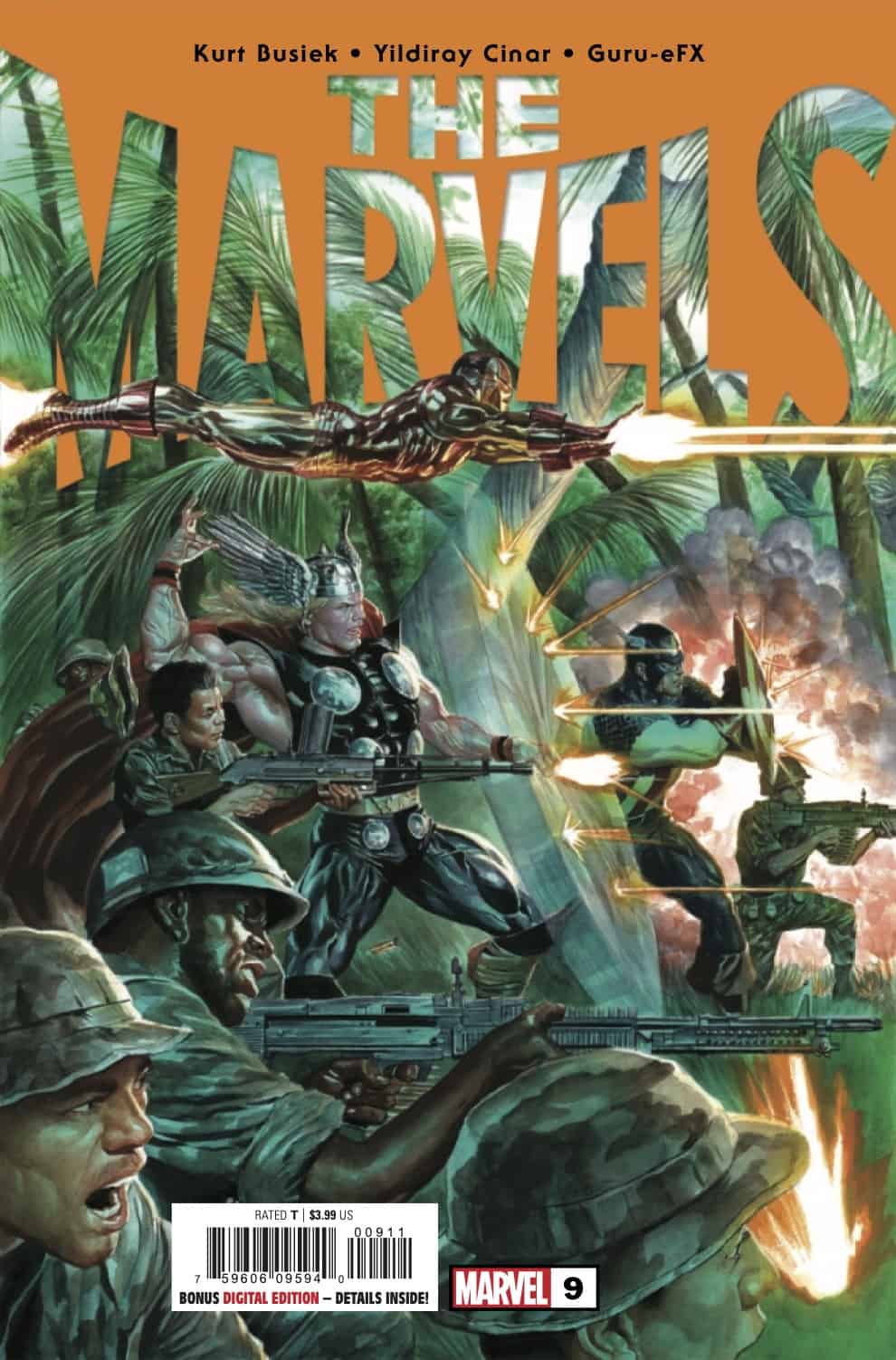 Years ago, the war in Siancong ended, in a shattering, emotionally wrenching disaster few remember. And today, all the secrets buried from then have come alive to menace the present. What drew the Marvels to Siancong? What drove them out? And what was behind it all? The Avengers, Lady Lotus and more star in the earth-shaking climax of a conflict that never truly died—one that sends the present-day story barreling toward its fateful climax.

Any seasoned Marvel fan has had their fair share of confusion regarding the sliding time scale, a tactic used to keep characters youthful and modern while preserving their ties to certain historical events. If we as readers struggle to comprehend how 60 years of real-life history translates into 15 years of super heroics, you can imagine how hard it is for the creators whose job is to make sense of it all. The Marvels creative team is up for the challenge, using minimal exposition and visuals to quickly clue in readers as to when the events of this comic are taking place. An appearance by Steve Rogers’ Nomad persona places one sequence firmly in the 70’s, and a cameo by former Avenger Hercules is enough to inform you that we’ve jumped to the 80’s.

The bulk of this issue serves as a character study for Lady Lotus, a veteran Captain America antagonist whose backstory is now imbued with more humanity and tragedy. While some readers may find the focus on wartime strategy and international politics dull, the finesse of Kurt Busiek’s world-building shines through. Tying Genosha, Madripoor, and Latveria into complex alliances with China and Russia grounds these fantasy locations as part of a larger world.

Although Siancong is entirely fictional, it’s war-torn history is drearily realistic with Yildiray Cinar’s art portraying hero versus villain action in a way that mirrors the devastation of the Vietnam war. Thor and Iron Man soar over the jungle canopy, bombing the land like fighter jets. Lady Lotus’ legion of monsters, drawn with same fantastical qualities that Jack Kirby was so fond of, tear through the battlefield like tanks. When an attempt at peace negotiations is interrupted by a fight between the Avengers and their foes, the consequences are eerily familiar. 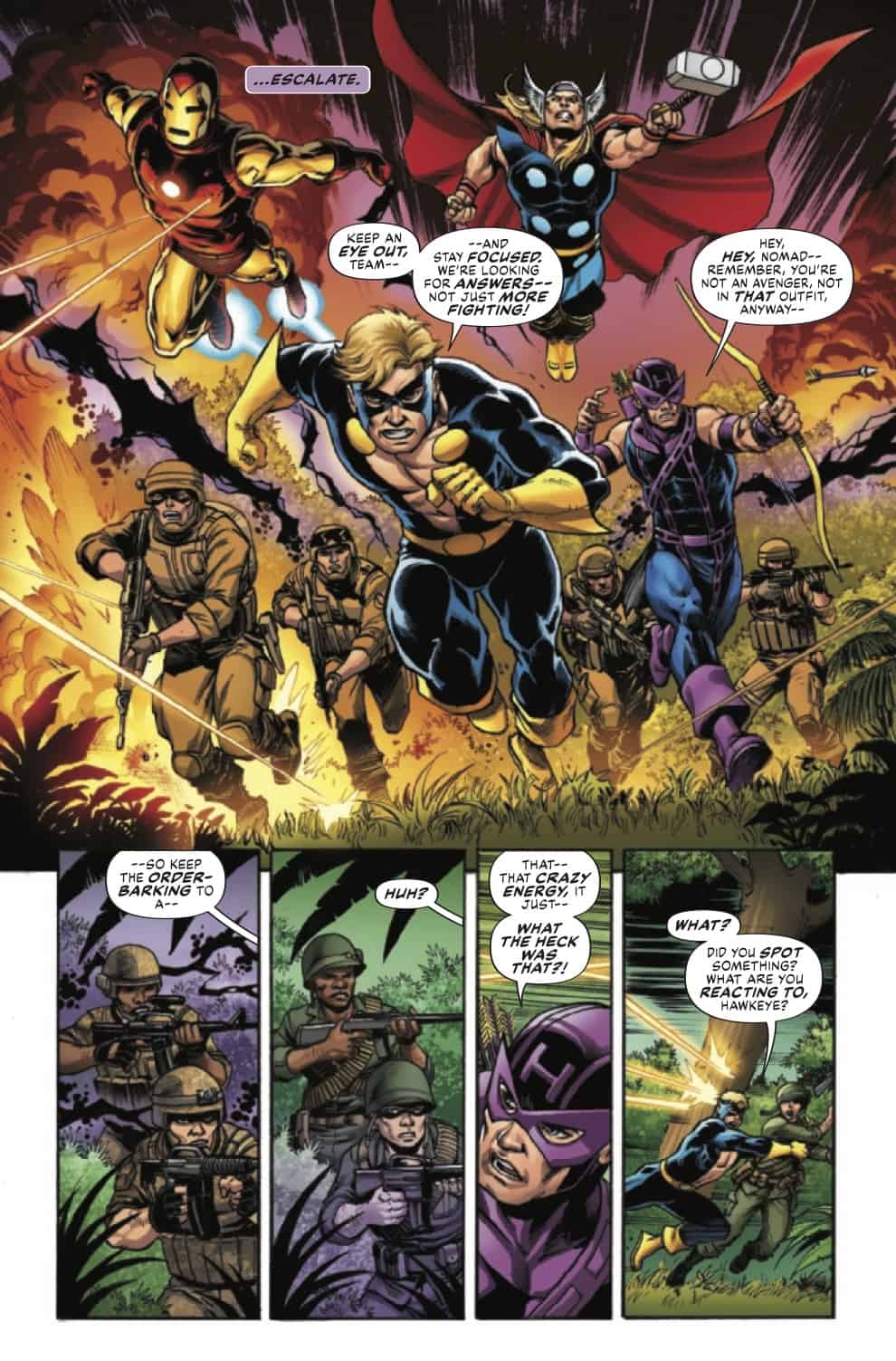 There is a clear theme of moral ambiguity running throughout the issue, as even Lady Lotus’ most loyal follower questions her true motivation. Is she driven by a desire to keep her home independent and safe from imperialistic foreign nations, or a desperate need to hold on to her dominance and source of power?  The integrity of Captain America and his fellow heroes is no less debatable, as their compliance in the suffering of Siancong’s people is left unclear. Whether through ignorance or intention, the actions of our heroes launched Lady Lotus down a more villainous path, and with her machinations approaching a climax in present day, I am left engaged and curious as to whether there remains any possibility of redemption.

The latest chapter of Kurt Busiek’s ensemble adventure steps away from the perspective of its super-powered protagonists to explore the history of the enigmatic Siancong conflict. Busiek and artist Yildiray Cinar combine their efforts to tell a story which spans across years of Marvel history, combining geopolitical conflicts with an impressive knowledge of comic continuity in a tasteful fashion.

The Marvels #9: The War Against The World