The Mighty Valkyries #5: Here Be Dragons 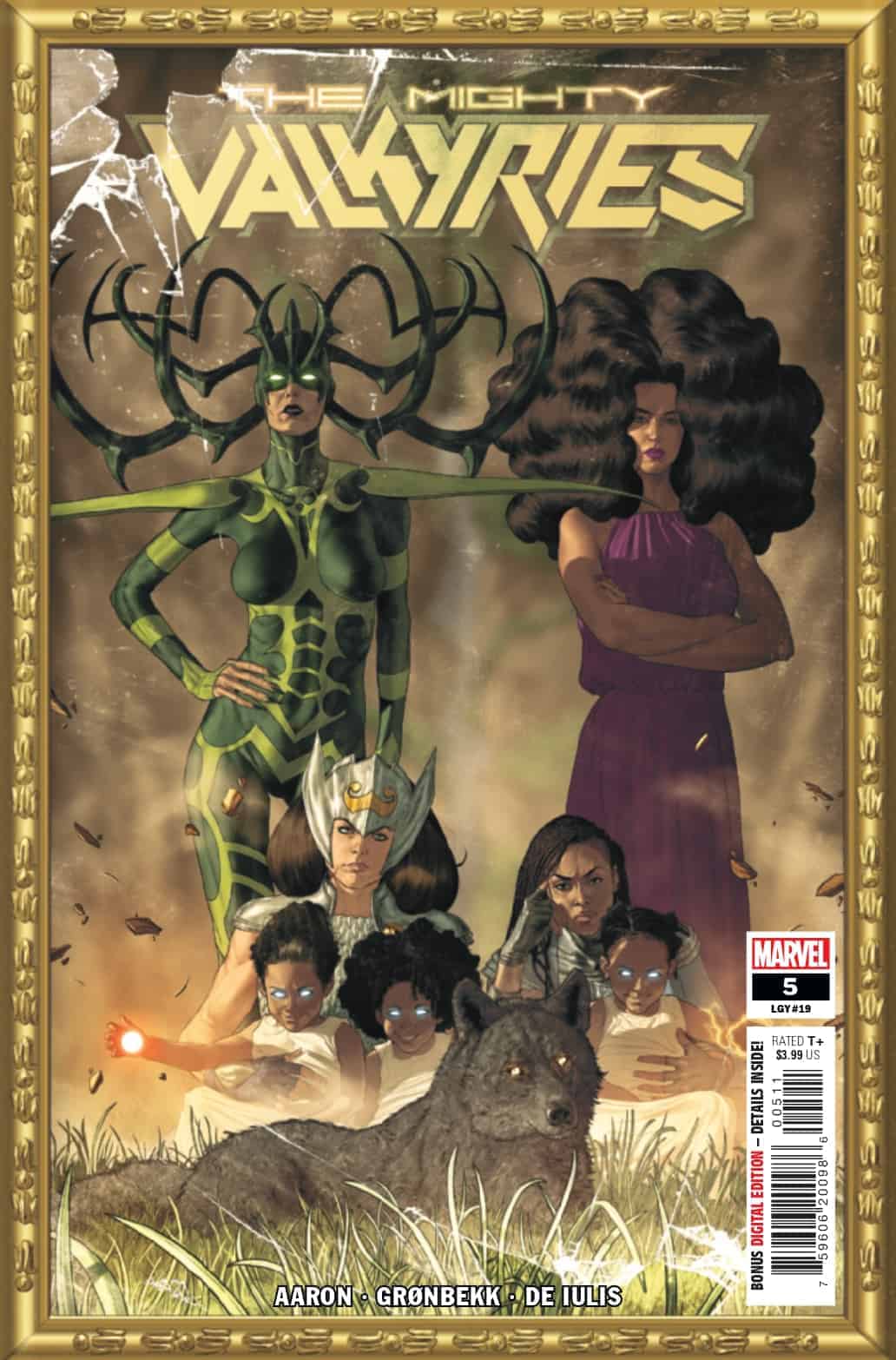 After the Valkyries—Asgardian warriors charged with ferrying the souls of the dead to their eternal reward—were all killed in the War of the Realms, Doctor Jane Foster took up Undrjarn, the All-Weapon, and became the last known Valkyrie...until she discovered another. With Jane’s help, the warrior Rúna escaped imprisonment and reclaimed her legendary weapon, the ax Jarnbjorn. But now the oracle Kvasir has warned her that something is very wrong in the Ten Realms, and Jane Foster is right in the middle of it...

Karnilla, co-Queen of Hel, has made a deal with the shape-shifting wolf “More”—their freedom for the waters of Urdarbrunnr, which unleashed life in the hereafter. Karnilla then stole three babies from a pregnant mother on Midgard and is raising them as her own pantheon of gods.

Her co-queen isn’t happy. Hela sent Kraven the Hunter after More, who is supposedly destined to eat the world. The wolf escaped Kraven’s first attacks, though Jane was wounded by a magical bullet in the crossfire. But it was only a matter of time before Kraven caught his prey—and with a magical spear from Hela, he’s stabbed More through the heart.

Not that it solved Hela’s problems: Down in Hel, the ground itself has rebelled against her. Shards of bone have risen from the ground, and one of them stabbed Karnilla clean through. The goddess clings to life, but not for much longer: Her blood brought forth the hulking skeleton of Fafnir, the draconic onetime king of Nastrond!

In the series’ action-packed denouement, Jane Foster and Runa face their final adversary: the mythological dragon Fafnir. Fafnir returns to Marvel comics in the form of a giant fire-breathing skeleton dragon, which is both as silly and as awesome as it sounds. Every panel of The Mighty Valkyries #5 is meticulously rendered by Mattia De Iulis, who employs tricks like rim-lighting and directional blur to make the issue’s lengthy action sequences feel energetic and enthralling. 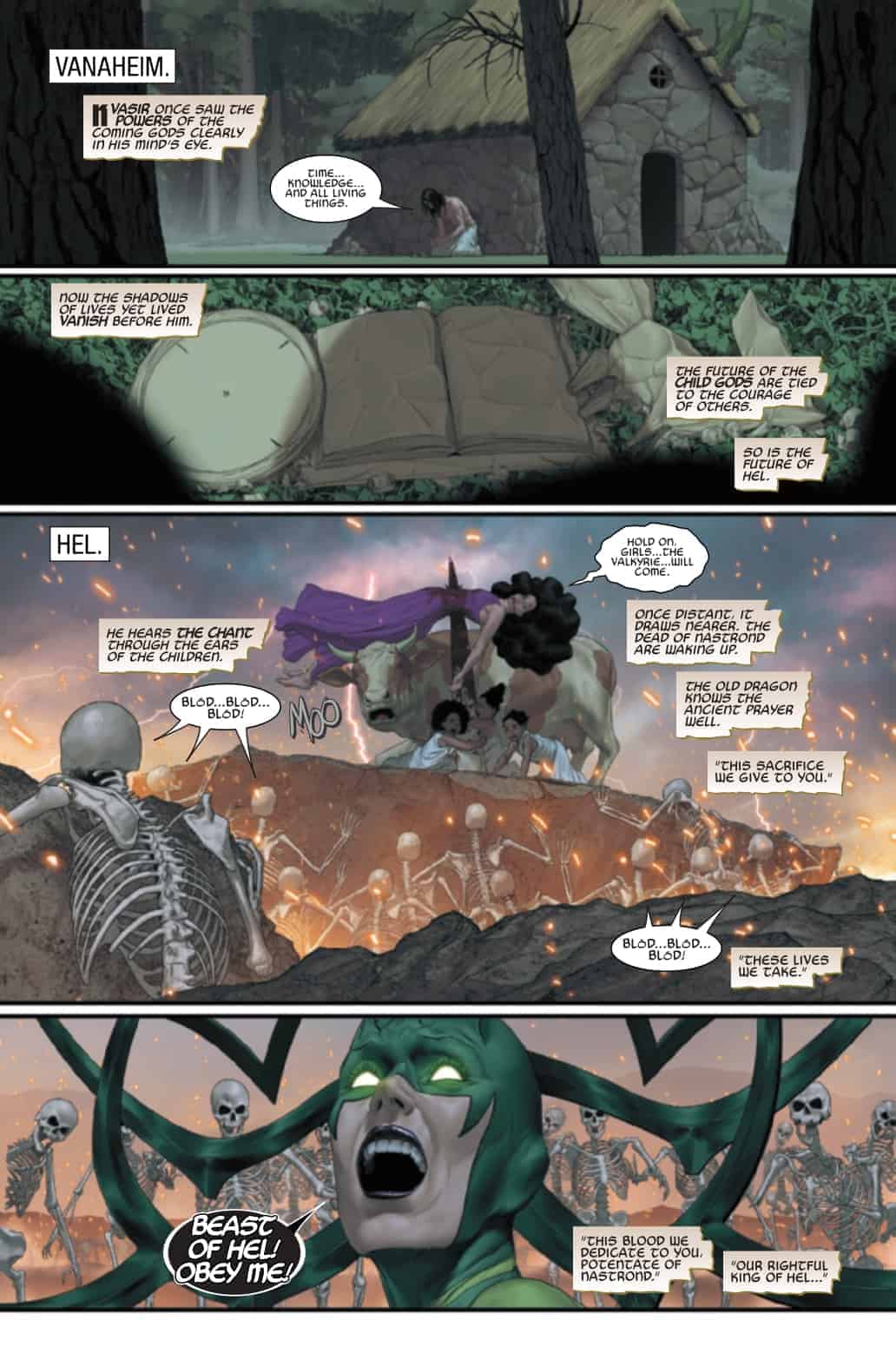 Previous issues of The Mighty Valkyries could be narratively unbalanced, a flaw which was emphasized by the jarring shift between the art of De Iulis and Erica D’Urso every time the book moved from following Jane to following Runa on their separate journeys. In this issue, Jason Aaron and Torunn Grønbekk spend little time developing the two valkyries further, but tie up a multitude of dangling story threads. No longer moving between two disjointed narratives or incredibly distinct art styles, the finale feels narratively coherent, well-paced, and satisfying. 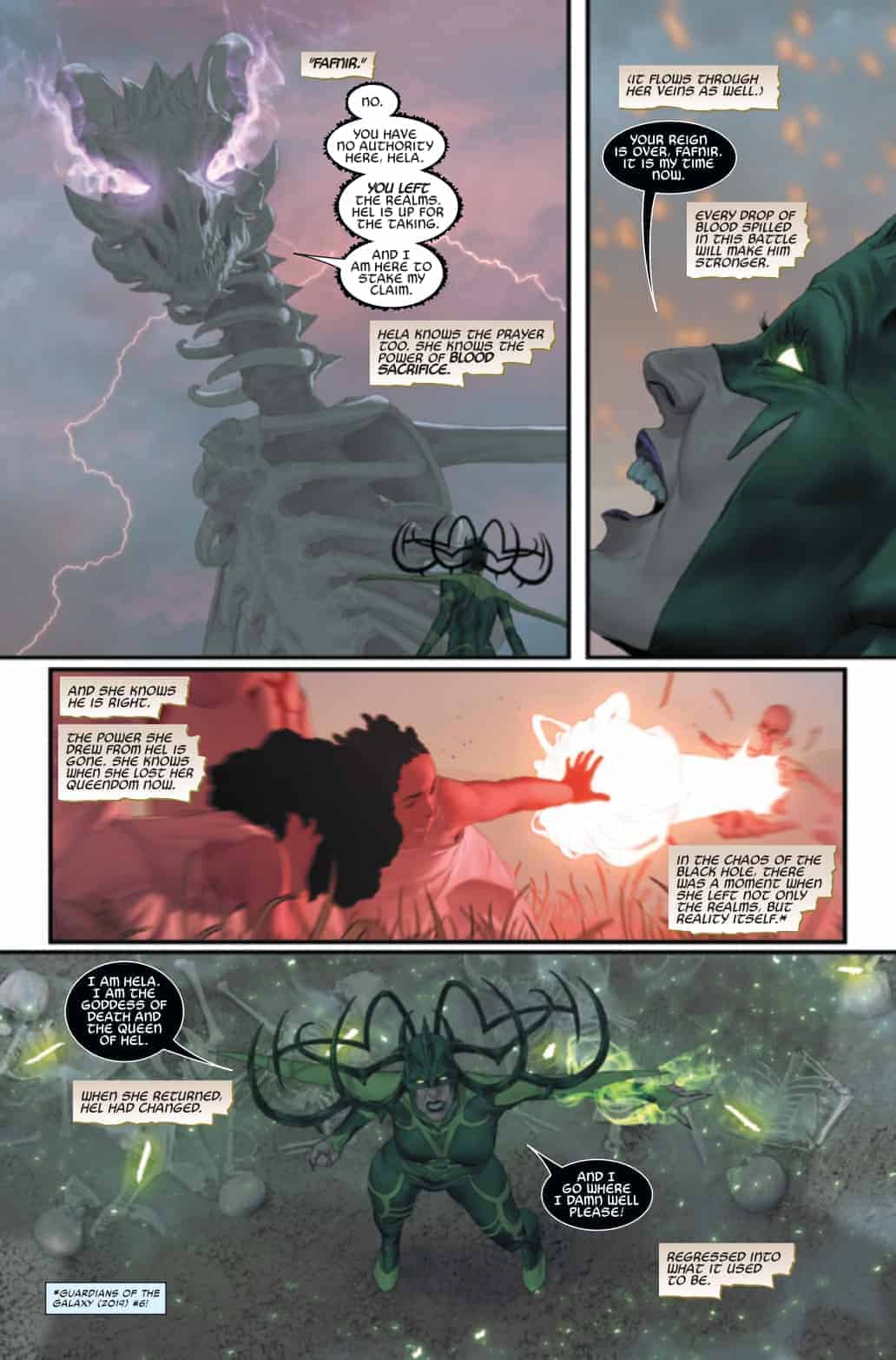 In all respects, De Iulis’ artwork feels cinematic, whether that’s in terms of page composition or lighting. He takes each character’s appearance beyond consistency to specificity, as if each character were an actor chosen for their role. The issue’s cover (also by De Iulis) feels like an awkward family portrait, capturing the book not at its most breathtaking but at its most human. While the scenes featuring Fafnir or More (as a giant wolf) are breathtaking, intimate character interactions — between Jane and More, or Hela and Karnilla, for example — still shine. Aaron and Grønbekk write their comic’s large cast of (often morally ambiguous) characters with empathy. De Iulis’ close-ups on these small moments amplify these characters’ every emotion: their fear and triumph and tragedy. As a result of its creative team’s efforts, The Mighty Valkyries #5 is engrossing — and perhaps even at its best — at its quietest. 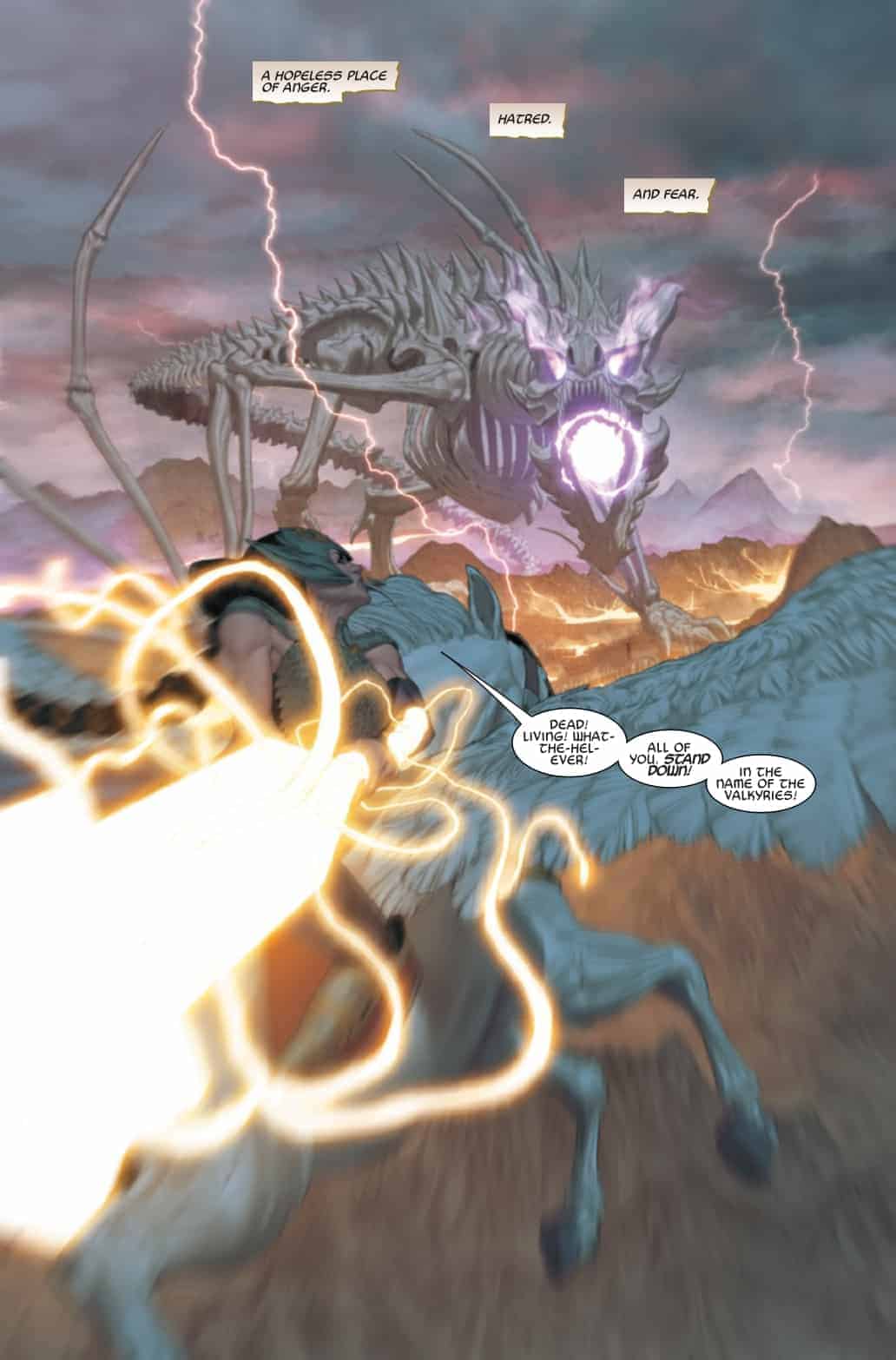 The Mighty Valkyries #5 is a visual feast that strikes a balance between the high-octane and the profoundly human.

The Mighty Valkyries #5: Here Be Dragons