The New Day Power of Positivity 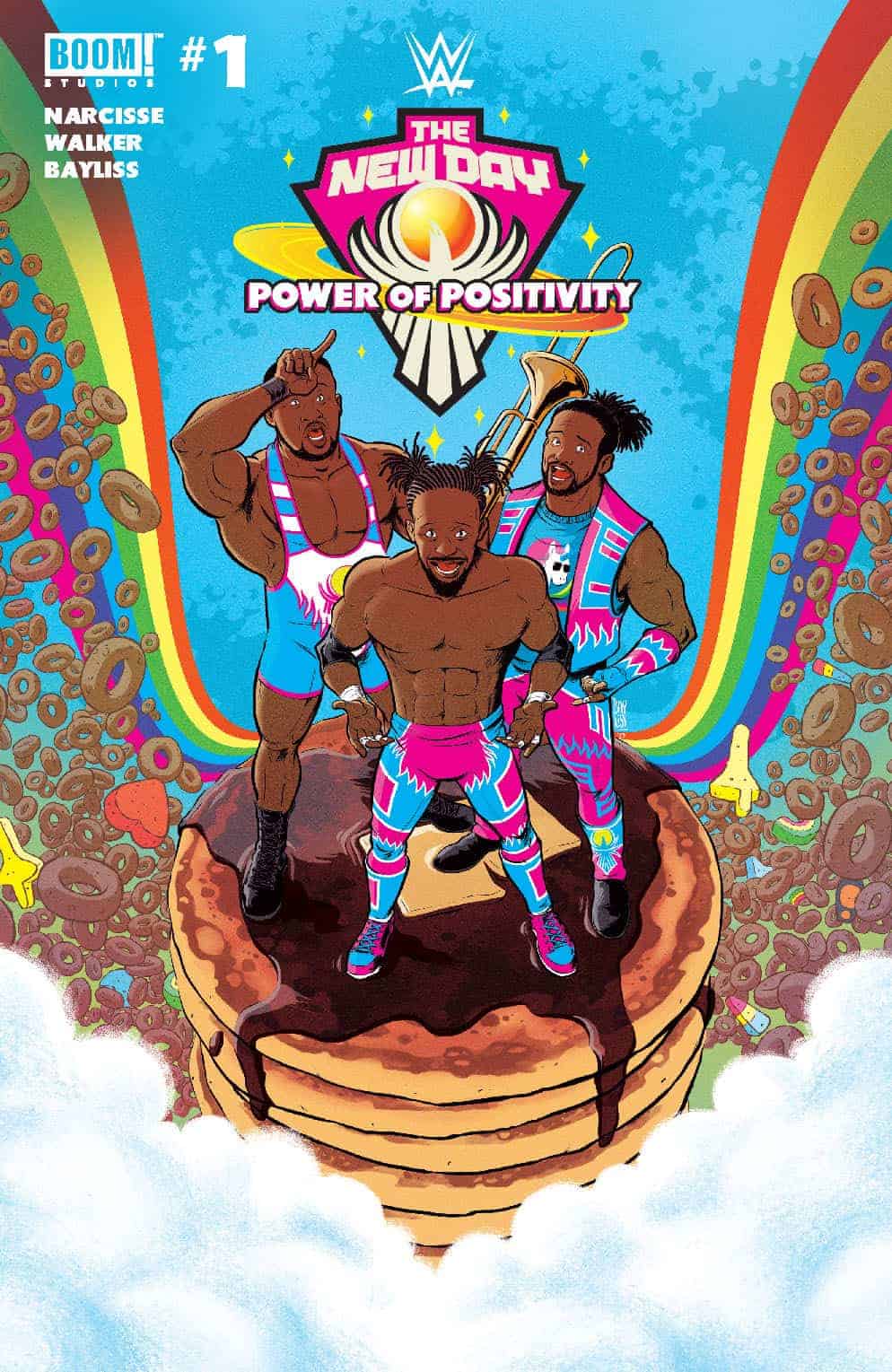 WWE'S The New Day is one of the most popular trio tag teams in WWE history. Boom Studios took it upon themselves to show you a glimpse of the origin stories of the three Superstars and show just how they got into the world's largest wrestling entertainment company.

Opening the comic with an entrance on RAW, The New Day is in one of the most iconic matches in WWE history with The Shields. Two trio tag teams, both complete with WWE Superstars and millions of fans watching. What an epic match! I can’t even imagine what being in the stands was like let alone watching from home as a little kid just dreaming of becoming a WWE Superstar someday. These superstars give fans hope. Every backstory tells every fan that they can be whatever they want to be with a little hard work. And for the New Day they all got there through, wait for it, the power of positivity.

Starting with Kofi Kingston, watching WWE at home as a kid and always knowing he would grow up to be a superstar wrestler. One night he waited what seemed like all night after a show to meet Faarooq, his favorite wrestler. They talked all night about hopes and dreams and Faarooq really understood Kofi. Since that night Kofi hasn’t given up and he is now a WWE Superstar. Moving on to Xavier Woods who worked his entire life towards becoming a wrestler. From academics to athletics working on his agility and speed, Xavier was made to be a wrestler and he achieved his dream by never giving up. The last of the trio is Big E, he’s been a big boy his whole life and never liked bullies. He stood up for smaller kids when he could and one day some bullies decided to team up and take him out 5 on 1. With those odds even with his size he should’ve lost, but he didn’t quit and that got him noticed.

The moral I love about the WWE and this particular tag team is that no matter what the odds are or what your background is anything is possible. The New Day is the poster tag team for young kids to push and never stop believing. Through the power of positivity anyone can be anything. The artwork really shines in the book with the bright colors. Every panel accentuates the goals and dreams of each character in each of their very different lives. No one could’ve seen these three individuals getting along let alone teaming up but they are a dynamic trio that showed no mercy and gave fans hope.

Everyone has a talent sometimes more than one talent and if it makes you happy never give up on it. Readers can appreciate the goals set by Boom and WWE. Giving readers hope to dream. That is all anyone wants right to achieve your dreams and be superstars.

Dreams are what make us who we are, they carry us to new heights. The New Day gives WWE fans the message of The Power of Positivity for a reason. If you manifest negativity and choose to be miserable you will be miserable. If you embrace a positive outlook on everything you do and push yourself and choose to be happy you will be happy. Your dreams are right there just waiting on you.