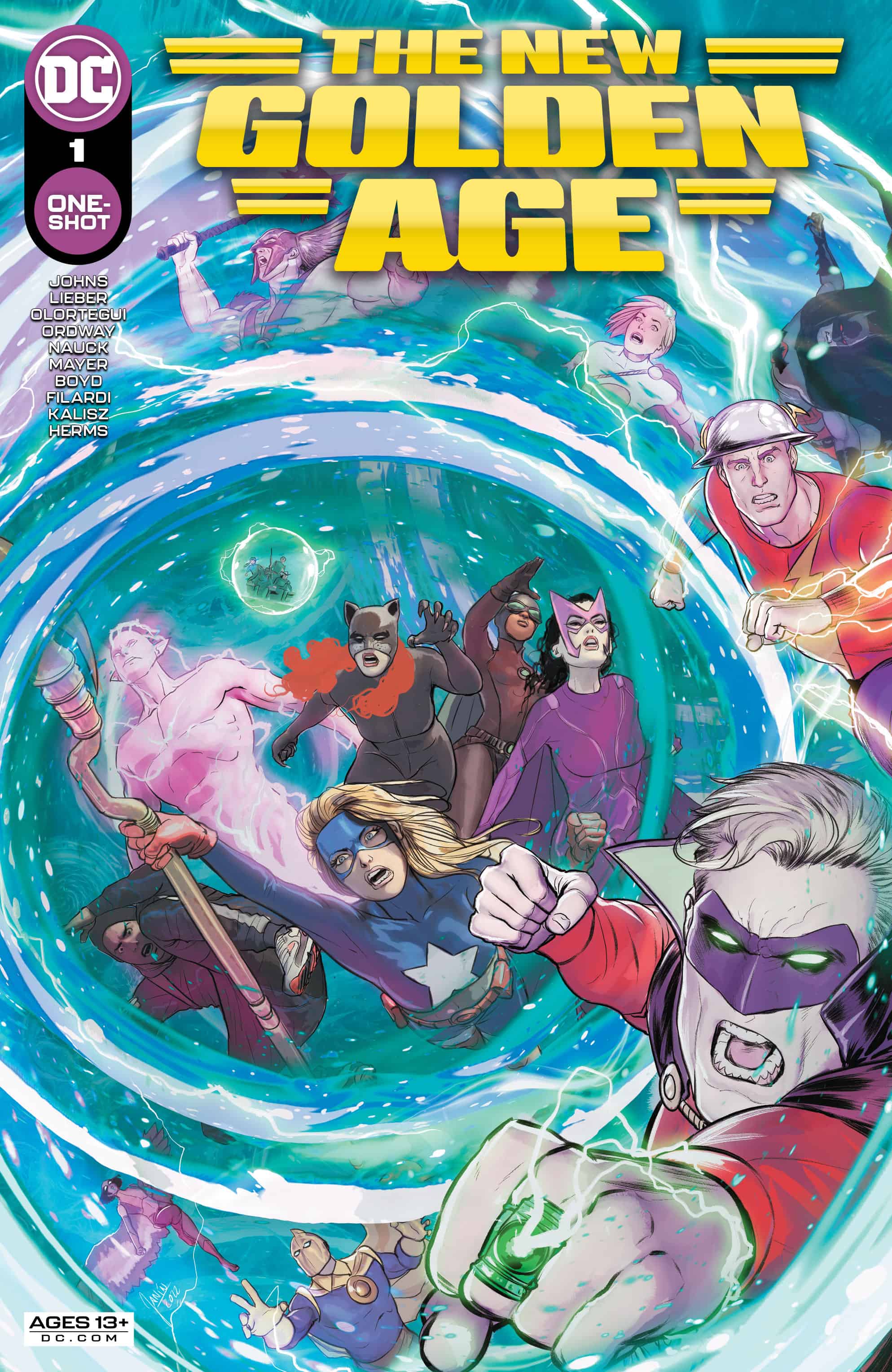 From the Justice Society of America to the Legion of Super-Heroes, The New Golden Age will unlock DC’s epic and secret-ridden history of heroism, launching a new group of titles set firmly in the DC Universe. From the 1940s to the 3040s, heroes take on the great evils of their time. But in the aftermath of Flashpoint Beyond, those heroes and villains will have their lives turned upside down. DC’s future…and its past…will never be the same again. But how are Mime and Marionette connected to this? Why are Rip Hunter and the Time Masters the most unlikable heroes in the DC Universe? And who or what is…Nostalgia? Don’t miss the start of the strangest mystery to have ever plagued the DC Universe.

FINALLY! After waiting patiently for what felt like decades, the long awaited promise of the return of the JSA is here…or is it? The title, the ‘New Golden Age’ is a throwback to the era these characters all debuted, but also to the classic The Golden Age, by James Robinson. Johns was one of DC’s chief architects over the last 20 years, Geoff Johns, is returning to the team that helped make him the superstar that he is in this tale that runs the gamut from the past, where the JSA got their start, to the far flung future, giving us glimpses of how the JSA has survived over the course of the millennia, introducing new faces, while also reintroducing some familiar faces to fans. There also seems to be a time traveler who seems to have a grudge against the JSA, and all of their descendants.

Geoff Johns was once DC’s golden boy, and probably has one of the most celebrated runs on the JSA, and their world. Successfully made the book a must read, and cleaned up the convoluted mess that was Hawkman’s continuity, gave us a definitive origin for the character (that got discarded when the New 52 was launched, but has since been partially reinstated during the classic Robert Venditti run). DC has been teasing the return of the JSA for years since the Rebirth era began, laying hints through various runs, like The Flash, and Snyder’s Justice League, but was finally confirmed to be returning in the Stargirl Spring Break Special last year, with Johns, and Bryan Hitch on art duties, alas that never happened, and Hitch is now over at Marvel, but has since been replaced by rising star artist, Mikel Janin filling in, which should prove to be an interesting read.

It starts with a death, as do most of Johns’ comics as of late, and the tale runs the gamut of the Justice Society, with the focus revolving around the death of Doctor Fate, or the deaths (plural) of Doctors Fate across the millennia, but what can they do to stop it? Also, who will gather to help form the Justice Society to stop the killer dead in his tracks? That’s not explained here, but it’s not expected to be here. It’s the opening salvo that will lead to the two upcoming maxis, but what it did do is get my Golden Age gears spinning with excitement for what’s to come. Also the reintroduction of a long time missing member of the DC Universe that we haven’t seen since the beginning of the Rebirth era, so her appearance here has me super excited for the next chapters.

Let me tell you about the art that’s in this opening shot. The art, oh my, they are giving us some amazing visuals here. Comics legend, and Justice Society royalty, Jerry Ordway is here handling the scenes from the 40’s, and it feels like home. Ordway’s style is what I see when I think of when I think of the JSA, so seeing him here just delights me to no end. Then you have Viktor Bogdanovic, whose work just felt fresh, and youthful. I loved every scene he gave us. The rest of the artists gave us some great work, but these two were the clear standouts for me. Another artistic highlight here was the Who’s Who info pages at the end of the issue. It gave us a bit of insight into who some of these new faces we can expect as this journey continues.

Unfortunately with all of this good stuff that I’m kvelling about, there’s some things that just didn’t quite land for me. The biggest would be: where is this in the current continuity? It seems every project that Johns has done since the Rebirth one shot has seemed to be not in the same world as the rest of the DC Prime Earth seems to be on. Looking at his Three Jokers, and the Doomsday Clock, being the two biggest examples, the continuity just doesn’t click, and the same seems to be happening here. Honestly, I’d much prefer this to be in its own world, with a separate continuity to play with. Not only would it keep the continuity errors this book could make, but it’d be a welcome callback to the pre-Crisis continuity, where the Society was on Earth Two, while the Silver and Bronze Age DC Universes were on Earth One. The two would have annual crossovers, and it was some great fun. DC’s Multiverse, or more accurately the Omniverse, so there’s literally anything that can happen.

After a year and a half of waiting, we’re finally getting the…official return of the Justice Society, with Geoff Johns returning to the characters that made him a superstar. Was he able to recapture that same magic he did 20 years ago? It’s hard to say. At this point it’s got some real potential, but Johns’ output in the Rebirth era has been hit or miss. It’s a middling start, but I’m willing to give it a shot.