The Nice House On The Lake #5: The Scientist

The Nice House On The Lake #5 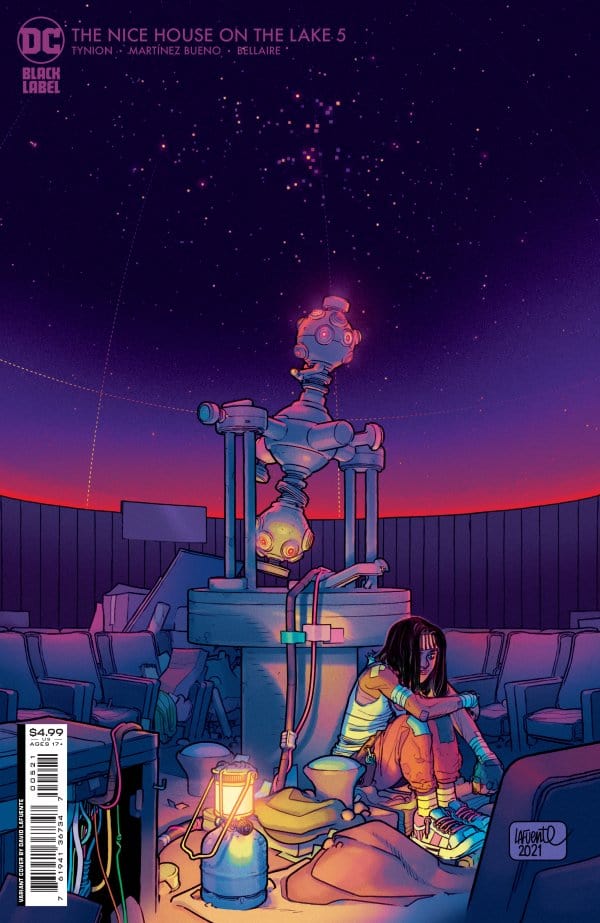 In which our unwilling band of survivors finally discover what, exactly, is inside that creepy black monolith on the other side of the lake.

This character-focused narrative continues to bring on the chills, and it does so precisely because it’s so rooted in unpacking who these people are. Why have these people been chosen to survive/save the planet? Who is Walter, really? What does he mean when he says, as he constantly does, that he ‘loves’ these people? The mysteries in this series are wound close and tight, but they’re not incomprehensible. It’s obvious that James Tynion IV knows exactly what he’s doing with this story. He ain’t just hucking spaghetti against the wall, seeing what will stick.

This month, we were granted insight into the character of Veronica, The Scientist, learning how she came to Walter’s attention. She dated Norah, before she came out, and Walter was reluctant to bring her into his group of ‘friends’. This meeting was also, it turns out, the first time Walter revealed his ‘meat tornado’ form to any of the humans, and she says that she totally forgot about it. It’s not clear if Veronica’s temporary memory loss was due to trauma or Walter’s mental tampering, but I strongly suspect that this will be revealed more in future issues.

We were also granted deeper insight into other characters. I love that Norah’s transness is presented as not a big deal. It’s who she is, but her transition isn’t fetishized or simplified for easier digestion by the Cis members of the audience.

Alvaro Martínez Bueno’s art is dark and emotive, evoking a mixture of beauty and horror with a deftness that captures both teenage innocence and adult terror. Jordie Bellaire’s colors are appropriately dark, verging occasionally on muddy. If this were a cape book these shadows would be terribly out of place (well, they’d be great for a Batman rag) but they fit in perfectly here. There’s some shit that you just don’t want to see. Your friend turning into a meat tornado, for one thing. Andworld Design’s lettering provided several important plot points, points which were presented in a way that made an infodump feel engaging.

In short, this is a horror story composed of equal parts head and heart. If you aren’t reading this book, you are missing out.

This is a horror story composed of equal parts head and heart. If you aren't reading this book, you are missing out.

The Nice House On The Lake #5: The Scientist