THE OLD GUARD: TALES THROUGH TIME #3 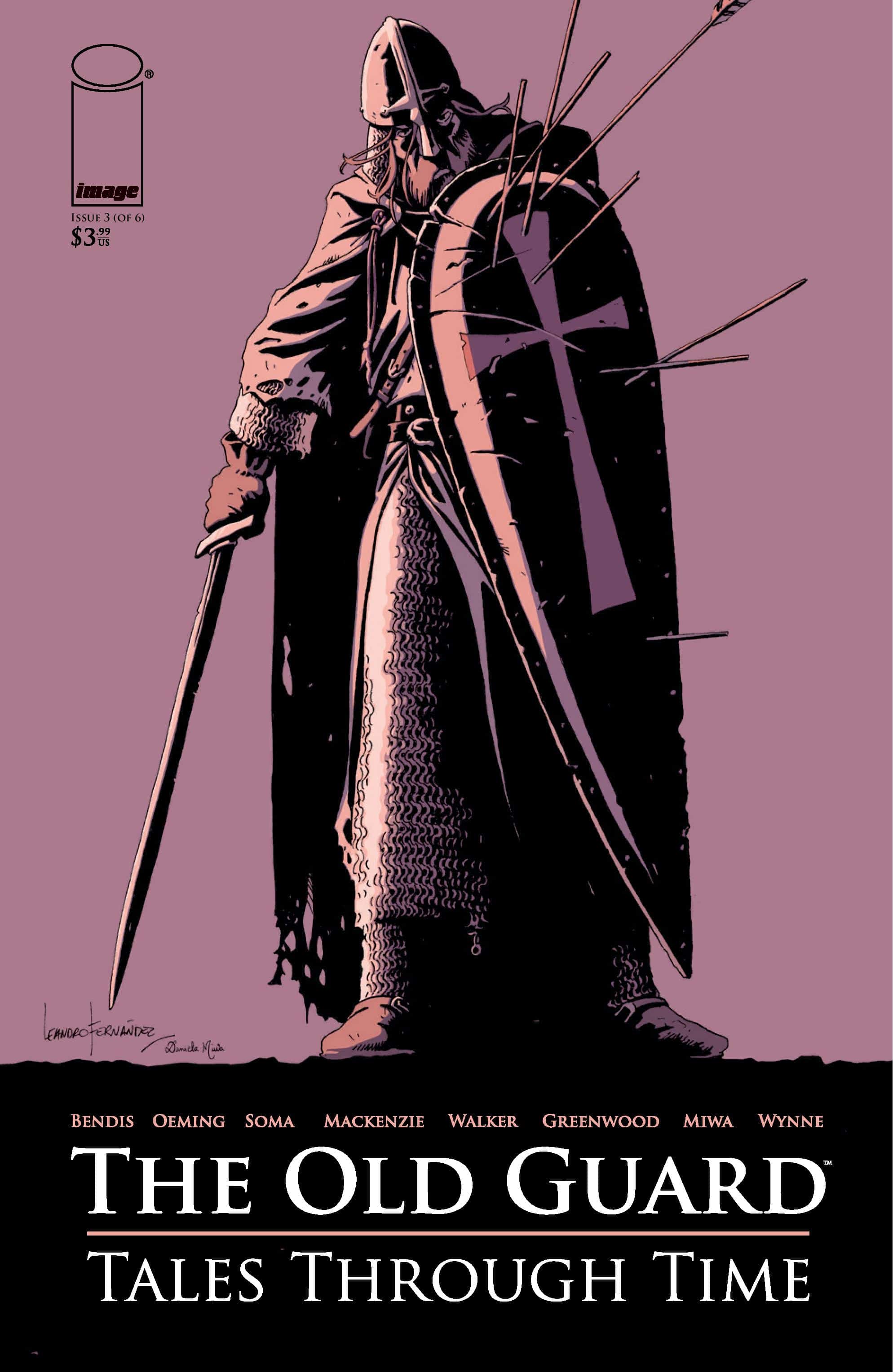 In "Passchendaele" it's the '70s, and Andy stumbles straight out of some dirty business to come face to face with the last person she ever expected to see! Then, in Lacus Solitudinis the team is tasked with an assassination on the night of the moon landing!

Being near-immortal means living unconventional lives as these individuals move through the years witness to the best of worst of humankind as we rise and fall again and again… Bendis and the team take a moment to examine the idea of these unconventional bonds formed as Andy finds herself in Cleveland in the 1970s after a mission, cleaning up in a restaurant bathroom and bumps into someone she never expected to see…her son. Not her biological son but an orphan of world war one who lost his parents in the small Belgium village of Passchendaele destroyed in the conflict between British and German soldiers. (An historically accurate reference if you’re so inclined to look it up!) 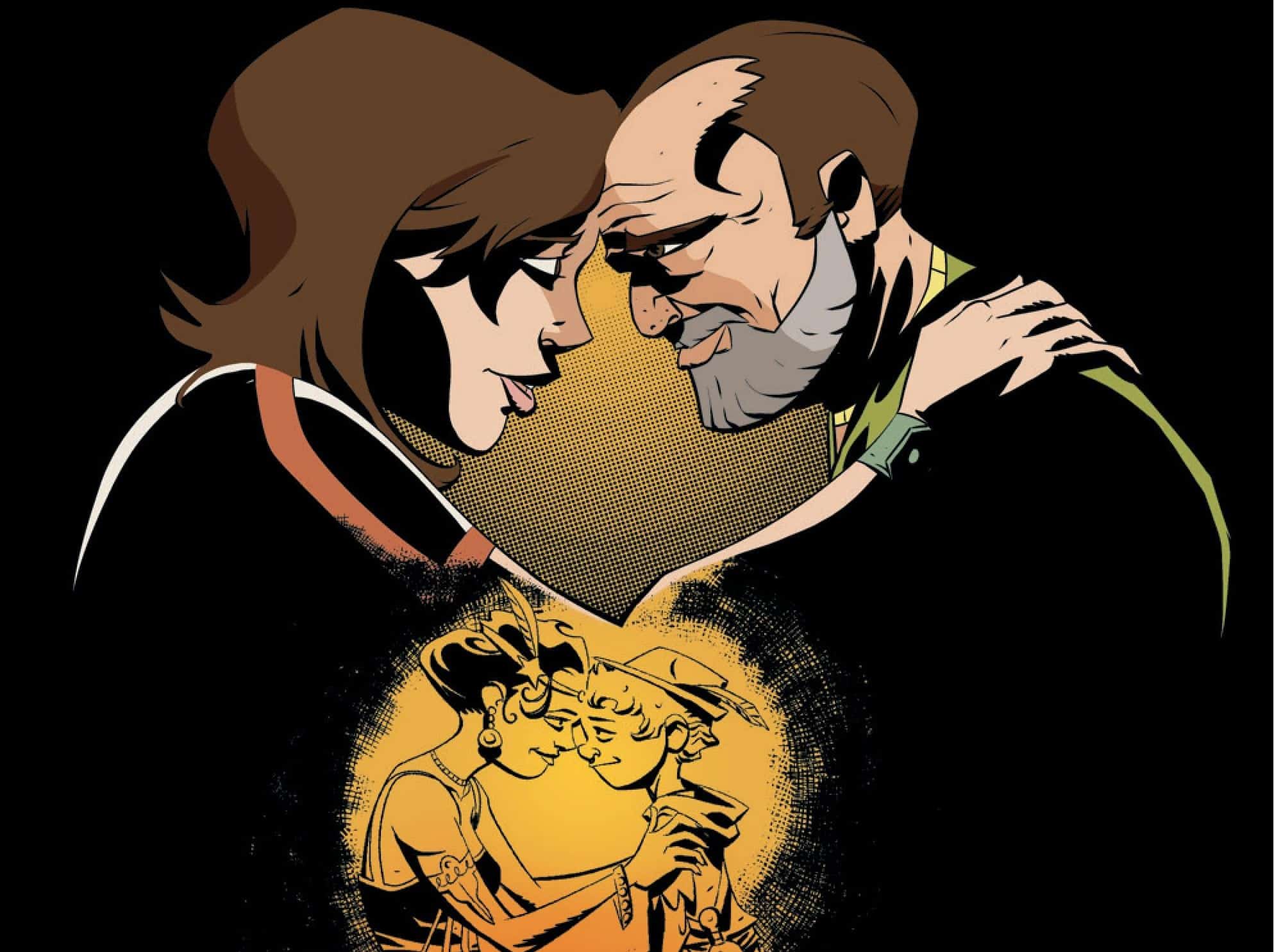 There’s a wonderful balance of wistfulness and warmth to the story in the writing from Bendis brought to life by the art. On one hand, Zeus is thrilled to see the woman he calls mother and so is Andy to see him but Zeus is acutely aware that the meeting is happenstance, completely random and lacking no intent on Andy’s part yet despite that, despite that he has not seen her in decades, their bond remains and that speaks to the idea that she loved this person and raised him, an act of pure selflessness in the long life filled with violence and death. Again it speaks to the idea of how Andromach cannot see the good she and her ilk have brought into the world and the innumerable lives they have touched and made better as they have soldiered through time because they are wrapped up in the doing that they never fully see the good they have done.

I like that the lives that Andy has touched are her living memory even as her memory blurs from so much life lived. The idea that Zeus invented a dish specifically geared to the taste buds of an ” older than dirt immortal” is a clever and original concept that makes you think about things you wouldn’t think about… like what would the palette of a person who is close to 7000 years old be like?

Artist Michael Oeming rejoins his POWERS collaborator Bendis for this story. At first, I wasn’t sure about his style for the story… Andy doesn’t really look like Andy at first until I realized something… I was looking for Andy as I imagined her with a certain look, specifically her black hair. Through the course of the story, we see Andy with no less than three different hairstyles and the longer I thought about it the more it makes sense, to hide her immortality a hair color change would certainly be warranted over the many years of her life. Oeming and Taki Soma work well together to create the feel of a Seventies eatery, and there’s attention paid to the clothing of the time as well as the color schemes of the period especially those ’70s color stripes. The choice of the sepia brown dominant color palette for the flashback war scenes is a clever touch adding a stronger impact when we see blood against the monochromatic background.

It’s the eve of the moon landing, in Eagan Minnesota Booker and Nicky confront a careless, homophobic cop whose actions meant a serial killer continued their murderous streak while in San Francisco Joe and Andy drink, discuss revenge, and the idea of the moon landing. 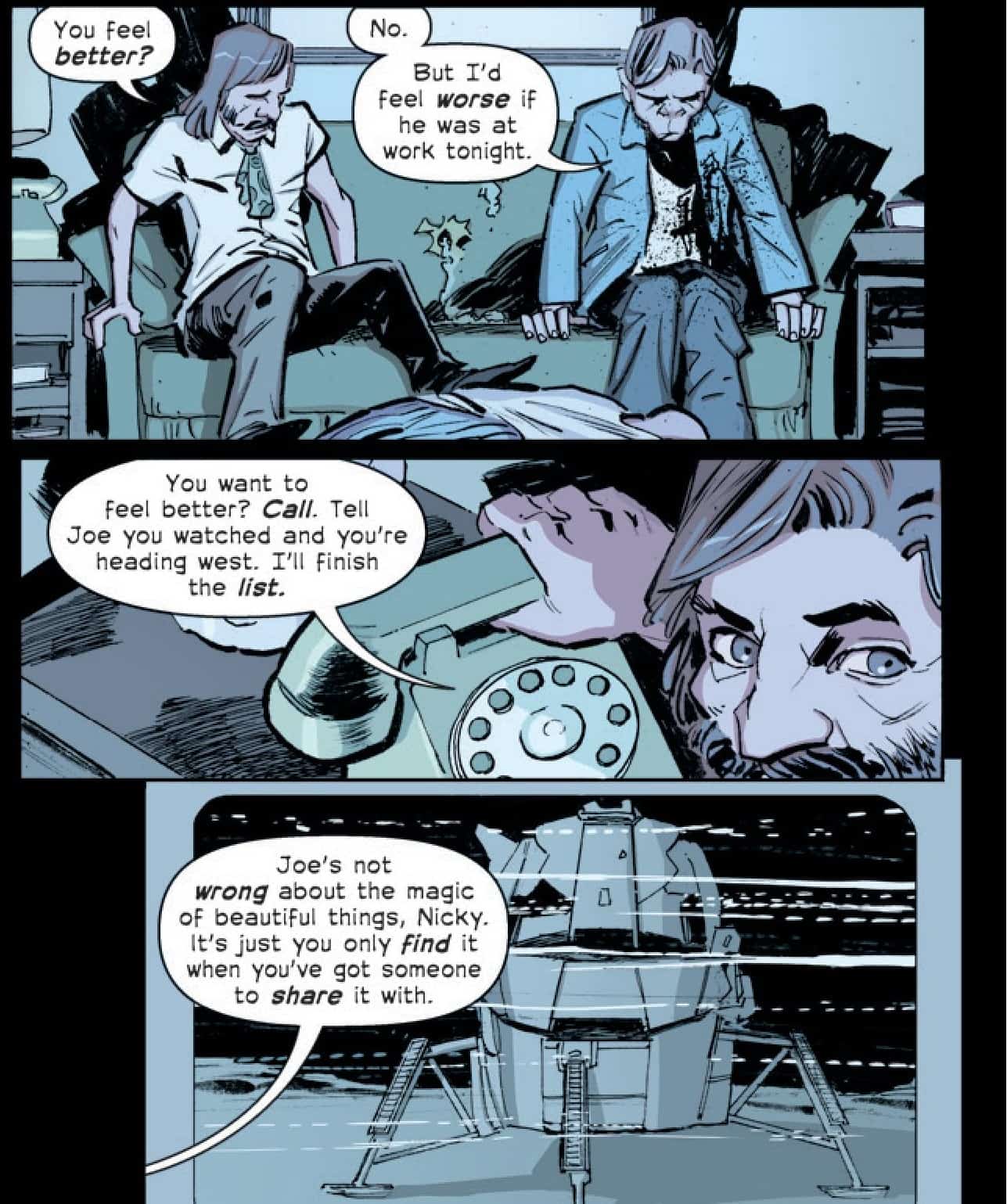 Point of view is a powerful thing and this vignette does point of view very well as it comments on the nature of human beings in all our shining glory and horrible apathetic ugliness. On one hand, Nicky wants to see justice meted out to the cop but his partner and love of his life Joe feels that taking revenge on the cop diminishes Nicky as a person. He refuses to participate and so they aren’t talking. Robert Mackenzie & Dave Walker juxtapose that opposing view with Joe and Andromach’s opposing views of human achievement. Andromach is jaded and cynical of the landing on the Moon while Joe is excited for it. It’s a clever way to examine the idea of human achievement and the consequences of it through an individual lens, Joe revels in the moment while Andromach reminds Joe that these glorious moments of human achievement more often than not lead to misery for other humans. “Beautiful things don’t always carry us to beautiful places,” Andy says “You don’t know until you get there, right?” Joe counters. There is a remarkable amount of depth to that small exchange.

Meanwhile, back in Minnesota, the violence gets done and it’s interesting that Booker does the killing, NOT Nicky, right at the moment of the landing. It’s Booker that reminds Nicky that Joe’s view of the magic of beautiful things is in having someone to share them with.

The art is solid from Justin Greenwood and colorist Daniela Miwa… It feels like Greenwood is deliberately paying homage to Leandro Fernández but in his own style while having Miwa color the story adds to that feeling. It feels deliberate and works very well to feel like you are in the world of the original comics.

The Old Guard: Tales Through Time #3 continues to deliver cleverly original emotionally charged vignettes that examine the best and worst natures of the human race through the lens that is the lives of these near immortal men and woman. Well worth the cost of admission.