The Onslaught Revelation #1: A Unicorn Made of Pasta 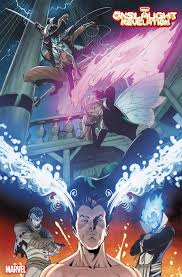 Onslaught has been feeding on the cast-off lives of the dead and resurrected. Now he has a means of reinstating the permanence of the grave. Can Nightcrawler and Legion stop him before the Cruciball comes to its charnel conclusion?

There is a lot to unpack in this faux-finale, and most of it is exceptionally good. Every so often, I’ll come across a book that is so perfectly constructed, so well written, that I have to immediately go back and read it straight through again. This was definitely one of those books.

Ordinarily endings make me feel a little bit melancholy, especially when the book’s been good, but luckily it looks as though the story of Nightcrawler, David, and his, ahem, Legionnaires will continue (with Blindfold!) after Inferno. This knowledge, alongside the return of Kurt’s beard (dapper facial hair, for the win), made the fact of the wait a lot easier to bear.

In terms of story, the revelation of Onslaught as the unacknowledged Jungian Shadow of the fledgling nation, and the underlined importance of acknowledging and embracing that shadow, was absolutely perfect. This dovetailed with Fabian’s purifying trip through metaphorical hell (first physical, then emotional) emphasizing the importance of confession, the necessity of it, if one is to receive forgiveness and grace. It was interesting that Spurrier pulled tiny little tidbits from many different religions and fused them into the discovery of The Way.

I would say that it was a little bit tone deaf to rename one of the few practicing Muslim characters after a term most widely associated with Christianity (calling her Congregation) but the evolution of Dust’s powers was beautiful and refreshing to see.

Thinking about this story, I keep returning to the idea of the Shadow. Krakoa is a paradise, all of the characters and many of the writers kept pushing this idea of the nation’s ‘perfection’ without realizing that the only true perfection found in this, or any, universe is sterile death. There can be no corruption without life to feed it, and no life without a modicum of rot. By attempting to banish the shadow of a nation, or a person, by refusing to see and acknowledge it, the Shadow grows in power and destruction.

No one, in this story, attempted to deny their shadow with more insistence than Charles Xavier. He presents a saintlike, unflappable, flawless image, despite his many repugnant actions. He shoves his feelings down into the crevices of his personality. And in the depths, they flourished. Contrast this with Nightcrawler, who is very aware of his limitations, and who worked to transcend them, for the sake of other people, and it’s easy to see why he was the one who finally understood what was happening to the people of Krakoa.

The psychological underpinnings of the issue were highlighted by the fact that the portal to the temple in the Astral Plane is a mirror. Every religion agrees that self-examination is necessary to reach your full potential and to live as a complete person. Having said that, I have to say that I’m very relieved that the Way is more of a philosophy than a religion. The line about people being allowed to keep their ‘old gods’ was a little bit dismissive of the real, living faiths being practiced in the world, but I appreciated the sentiment.

The art in this story was absolutely astonishing. Bob Quinn is truly an artist to watch. I’m sad that it looks like he won’t be continuing this story (especially after seeing the preview images of Nightcrawler’s new costume, and the beard!) but I will continue to actively seek his work out. I haven’t been so enamored with an artist in a long time. His facial expressions are as exquisite as his action scenes. He’s a remarkable, distinctive talent.

Taken together, this story was an excellent conclusion to Way of X, and a brilliant beginning for what’s to follow.

This story was a beautifully drawn, action packed, philosophically sound, pee-filled season finale. I just can't wait to see what happens next!

The Onslaught Revelation #1: A Unicorn Made of Pasta