The Riddler Year of the Villain #1: Thanks for Nothing

The Riddler: Year of the Villain #1 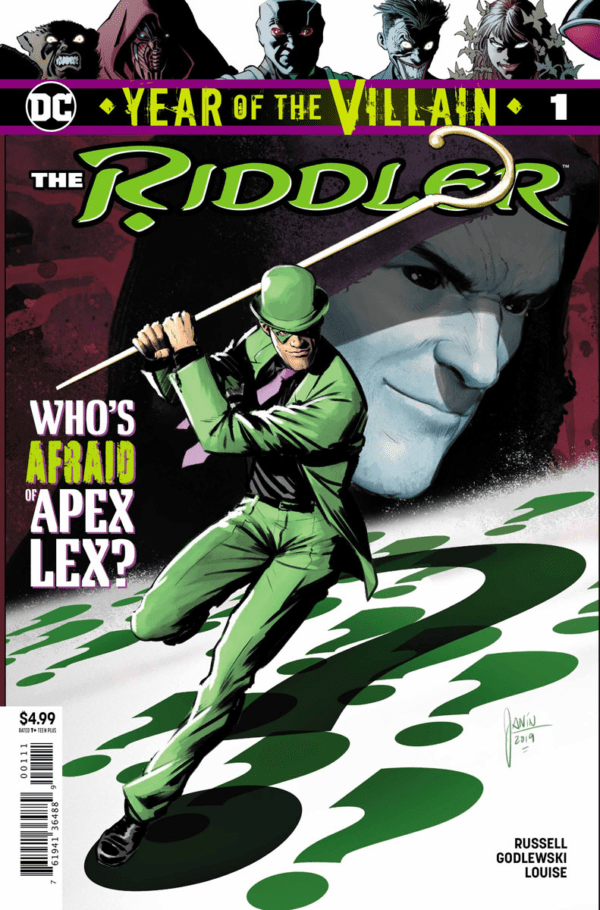 Lex Luthor has been given some amazing superpowers, transforming him into "Apex Lex", and he's been giving other villains some "gifts". so they can totally crush their enemies. Also, The Riddler has been on a bit of a losing streak.

Overall I enjoyed this issue, despite a few problems. Storywise, Mark Russell asks the question that we all want to be answered: why can’t these Batman villains ever win? What are they doing wrong? This question is discussed by The Riddler and King Tut over lunch, and the Riddler leaves still pondering the question and ticked off that while Lex Luthor is giving stuff to the other villains right and left, Riddler is left holding his hat.

We get some great Batman stuff, showing how and why he kicks so much butt in Gotham. We also get some great Riddler stuff and it’s not the typical origin story flashback that you get in event books like this, instead, it’s a great trip into Ridder’s head as he tries to figure out why he keeps doing what he’s doing and never changing it up. Running alongside that story, you get some solid Luthor stuff and a King Tut story that’s at times laugh out loud funny,

I think my major problem with this book is that I was (and still am) totally confused by WHAT DC Universe this is set in. Look, I know it’s set in the main DCU, but there’s some really wonky Batman stuff in it that left me scratching my head. Specifically, when Batman visits Commissioner Gordon at Police Headquarters, some cops on their lunch hour ask Batman if he wants them to put some pizza in the fridge for him to have later. WHAT?!?!?! There’s a couple of other moments similar to this that took me out of the book, but it wasn’t anything too much to kill the book for me.

Yeah, there are some goofy moments in this issue, but this book is leaps and bounds better than the typical event tie-in book. I was expecting a left-over issue of "New Year's Evil", but was pleasantly surprised by how much better this issue was,

The Riddler Year of the Villain #1: Thanks for Nothing