The Rush #1: Gold in Their Veins (ADVANCED REVIEW) 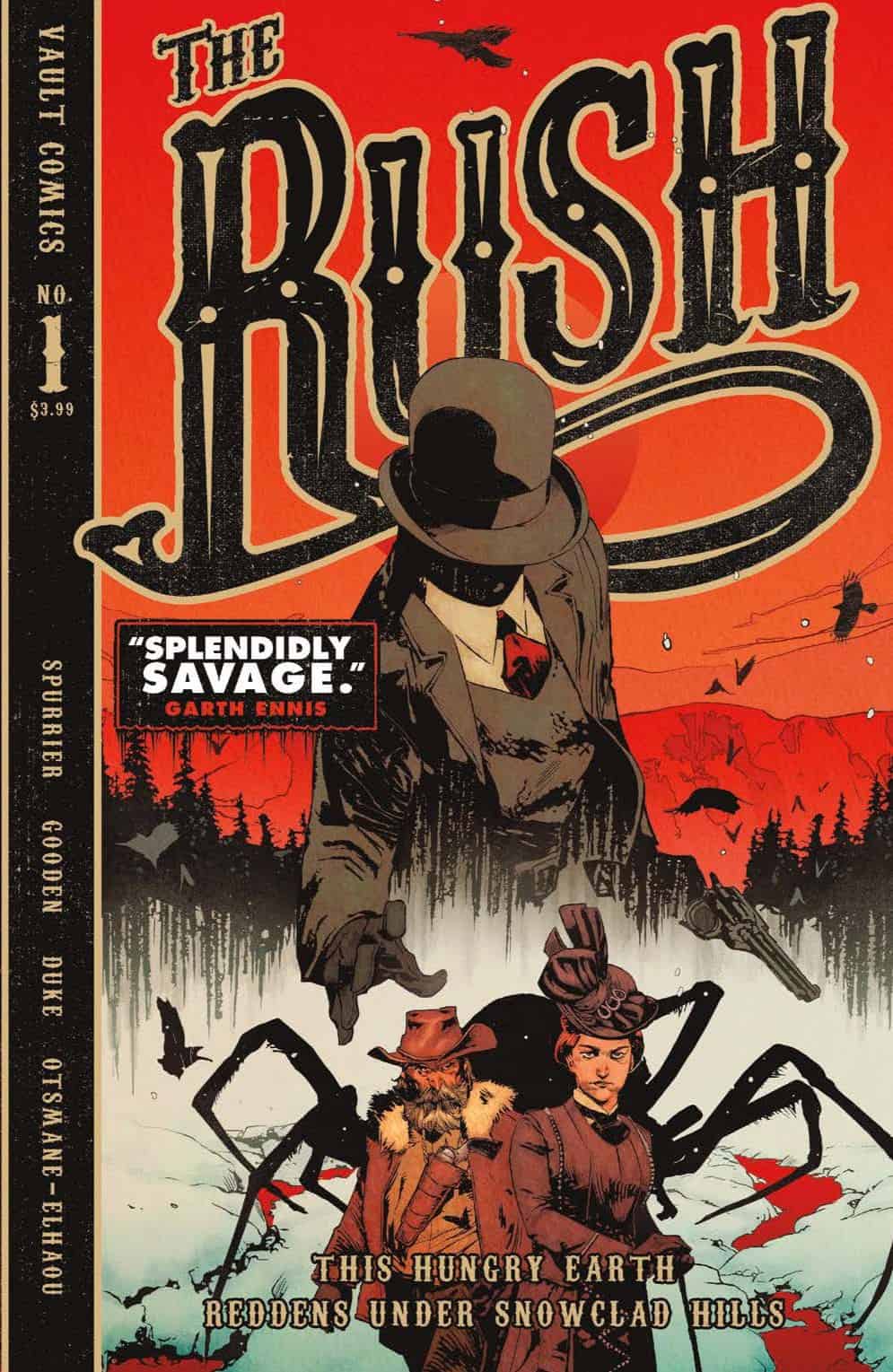 1899, Yukon Territory. A frozen frontier, bloodied and bruised by the last great Gold Rush. But in the lawless wastes to the North, something whispers in the hindbrains of men, drawing them to a blighted valley, where giant spidertracks mark the snow and impossible guns roar in the night.

To Brokehoof, where gold and blood are mined alike. Now, stumbling towards its haunted forests comes a woman gripped not by greed — but the snarling rage of a mother in search of her child…

From Si Spurrier (Way of X, Hellblazer) and Nathan Gooden (Barbaric, Dark One) comes THE RUSH, a dark, lyrical delve into the horror and madness of the wild Yukon.

There’s always a sense of longing that comes with stories told through letters as a framing device. Maybe it’s due to letter-writing falling to the wayside as phone calls, texts and email took over as the primary modes of conversation. Whenever a story chooses to use letters to convey its narration, whether it be film, prose, or even comic, there’s always a sense of melancholy and nostalgia that twinges the words unfolding, even if the subject matter is bright and vibrant. That sense of melancholy heavily hangs over Si Spurrier and Nathan Gooden’s newest book The Rush, conveying the deep sense of forlorning love that permeates the story.

The Rush opens as all good horror stories do, with a show of the ethereal, supernatural killer’s skills as an executor, while leaving a lingering mystery as to what the being is. Spurrier’s script doesn’t allow its audience to linger in the violent act, giving a quick set-up of someone, or something is killing prospectors in a snow-ridden countryside. It’s a perfect representation of the book’s strength, being quick, efficient but visceral. The book slows down after the opening, and recounts the story of our protagonist, Nettie, as she writes a letter to her son Caleb, who has gone north to assist in panning for gold. She’s not heard from him since the beginning of his pilgrimage to find wealth in the frozen landscapes and is worried for his safety. It’s a testament to Spurrier’s writing that the text boxes never feel like a slog, and add a sense of interiority to Nettie that is present in the images, but is refined by the words on the page.

The driving force that makes the letter aspect of the book is Hassan Otsmane-Elhaou’s stellar lettering choices. The cursive scrawl of the words Nettie is thinking, created by a controlled, guided hand, clashing with the ragged and torn scraps of paper serving as the caption boxes, reveals to the audience everything it needs about Nettie’s mentality. Even the way speech bubbles and the words inside are represented provides a clear sense of the character’s internal consistencies or inconsistencies. Nettie, for example, has smooth speech bubbles, but when confronted with a prospector who has a clue to her son’s whereabouts, he’s rendered with a bubble trailing and sloppy, as though it’s an effort for the character to string together the information Nettie needs to hear.

For a series that has touches of the western genre, but feels closer to The Thing than The Gold Rush, Gooden’s art conveys the sense of fear and terror associated with the Klondike, and its invitation to death and despair. The pencils tell a story of hard men and women trying to survive, and use that to inject an edge into everyone from Nettie, to her hired protection to the broken, dejected panners dropping in the cold. The sharp linework stabs and digs in like a bitter winter wind, getting under the skin and chilling its reader to the bone. Paired with Addison Duke’s muted palette, it makes it clear that this space, and the people in it, are worn down and broken. Scenes lit by fire and amusement in the city have a darkness that clouds them, and even the flecks of gold appearing through the book seem to have lost their luster.

The Rush is a book that feels like the first winds of a harsh winter, bringing in a sense of dread and despair to those who experience it. In this first issue, it becomes clear that Spurrier, Gooden, and the team are drafting a tale of bleak horror in a remote landscape with the souls of the characters at risk. It’s an excellent set-up to a horror narrative, and feels like a bundle of letters found generations later, to be passed along and remembered in a new light.

The Rush #1: Gold in Their Veins