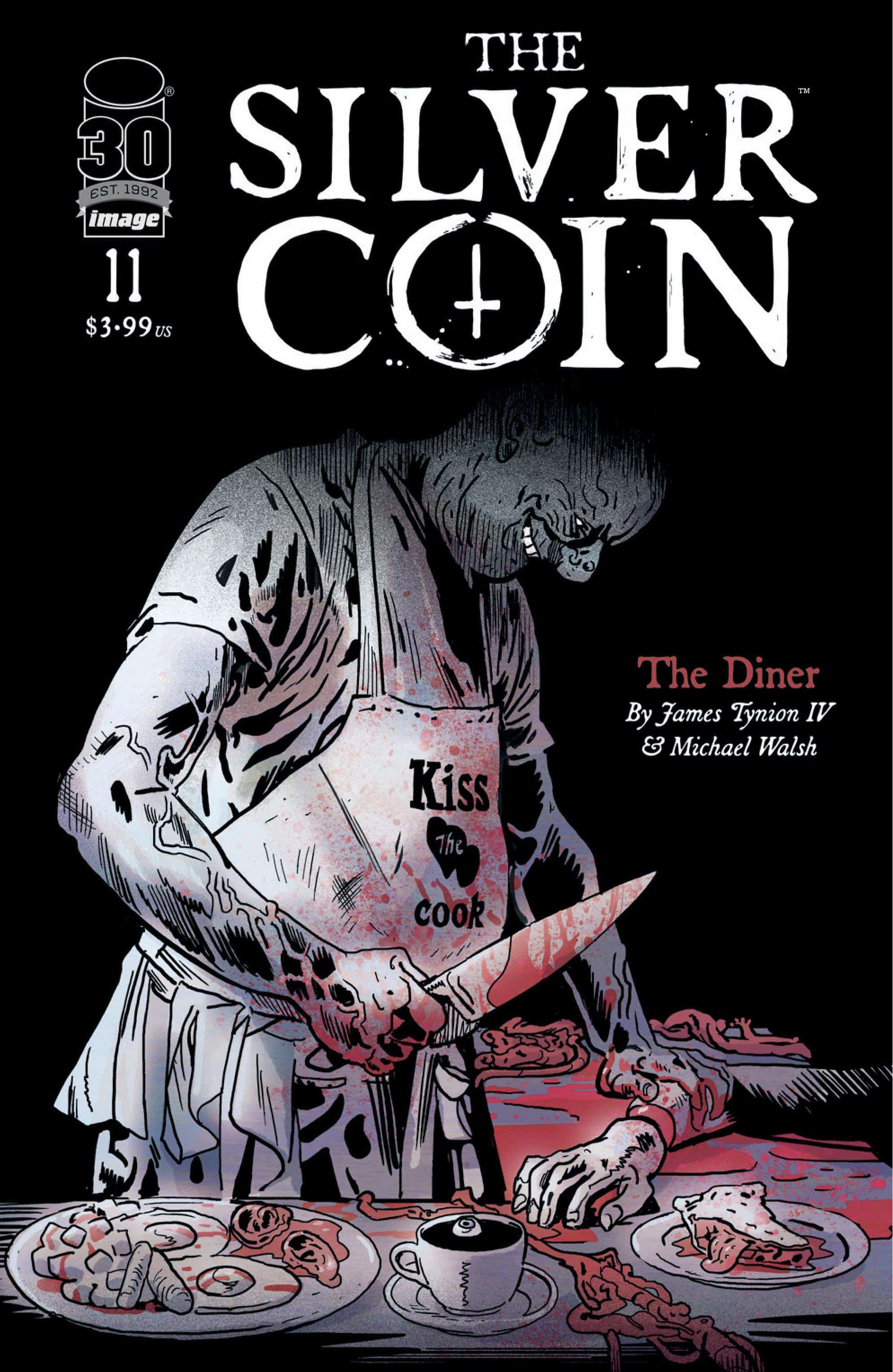 In 1978, a firefighter finds a strange silver coin in the charred ruins of a nightclub. He quickly learns exactly what he can use it to do. What happens when a dark mind harnesses the coin’s power and unleashes it on those who least expect it? Find out in this chapter of THE SILVER COIN.

Nothing ruins a good burger like missing a secondary topping. Not necessarily something vital like the meat, bread or cheese, but say pickles or onions, which doesn’t seem egregious or make you swear off burgers for the rest of your life, but it does subtract from the overall experience. The burger could have the freshest bun the world has ever seen, the goldilocks of cooked meat (well done for the win), but if that one element that completes the dish is missing, it leaves a longing that survives long past the meal.  While you know what element is missing physically, it’s something ethereal, or unique to the beholder, that is missing when taking that first bite.

The Silver Coin #11 returns with James Tynion IV on writing, Michael Walsh on linework, lettering, and sharing coloring duties with Toni Marie Griffin. Kicking off the new arc, the issue takes place in an ambiguous time, in a small roadside diner, being threatened to shut down due to a thinly-veiled McDonald’s chain. Tynion’s script quickly establishes recognizable beats: the quirky, bookish waitress that finds the place the only quiet place to read, the chain-smoking, grizzled waitress, and the greasy, quiet cook. They lament the lack of customers and the lead waitress, Jean, discusses her plans to burn down the fast-food juggernaut, venting her frustrations with the chain siphoning the customer base, and more importantly her tips. It’s all pretty boilerplate, and it’s not hard to see where the story is heading once a customer leaves a tip with the titular coin mixed in. Tynion comfortably hits the beats that follow, from the coin drawing crowds of people that can’t get enough of the food, gorging themselves until… well, you’ll see. As the ingredients begin to run low, things go from bad to worse.

This issue is like eating that burger described above, in that it’s still satisfying in the moment, but the whole time, the mind wanders, wondering where those those pickles are. It’s also hard to put a finger on what the issue is lacking, but when looking at past issues that tackle late-stage capitalism, modern mythology, or ritualistic sacrifices, this issue feels like it’s playing it safe. No cutting commentary creeps its way under the skin or cosmic, existential terror that leaves you checking the corner of your vision. Instead, the issue is just a tale of terror that would feel in line with a horror movie to catch on a late-night TV binge. Like the burger, it isn’t offensive or terrible, but it just has that element missing that makes The Silver Coin the best horror comic on the shelves.

That average plotting is in a direct clash with Walsh’s art, which remains as horrifying and captivating as ever. Every chance for the artist to bring to life greasy spoon food, the waning Americana atmosphere, and visceral killings is enough to distract from the middling story. Walsh’s pencils give a strong sense of character to Jean, lines of bitterness and resentment accentuated by her desire to burn down the template of capitalism that works to destroy her livelihood. Walsh is also able to render in grotesque detail the hunger that is incited by the coin, turning everyone under the coin’s effect into a lifeless creature that can do nothing but consume.

Details fade on faces, antimony breaks down and Walsh perfectly illustrates what madness true hunger can be. There’s an excellent montage of people eating to the point of bursting, and the coloring shifts from the blues and beiges of the diner to a reddish hue, indicating that shift into viscous consumption. It’s a subtle touch that doesn’t have to spell out the disgusting scene but is heightened with a matching set of onomatopoeias to realize the sounds of people waiting with reckless abandon.

The Silver Coin #11 is an solid comic with the bones to be a great one. The writing leaves much to be desired - sticking to the surface-level when it could be cutting to the core, especially knowing the background of Tynion and his ability to craft compelling horror. Walsh delivers consistent excellence in his linework and lettering, and he and Griffin’s colors do much of the heavy lifting for the story. In a series that feels like it has something to say with the stories it tells due to the influence of the coin’s evil influence, this issue just is lacking in that pointed subtext. The elements are all there to tell a story about capitalism destroying small businesses, the reckless consumption of meat that will tear apart the industry, or even the plight of the working class in the service industry during an era when conditions have only declined. Instead, the script plays at face value and is only saved by imaginative art and lettering that begins to tap into those deeper elements.