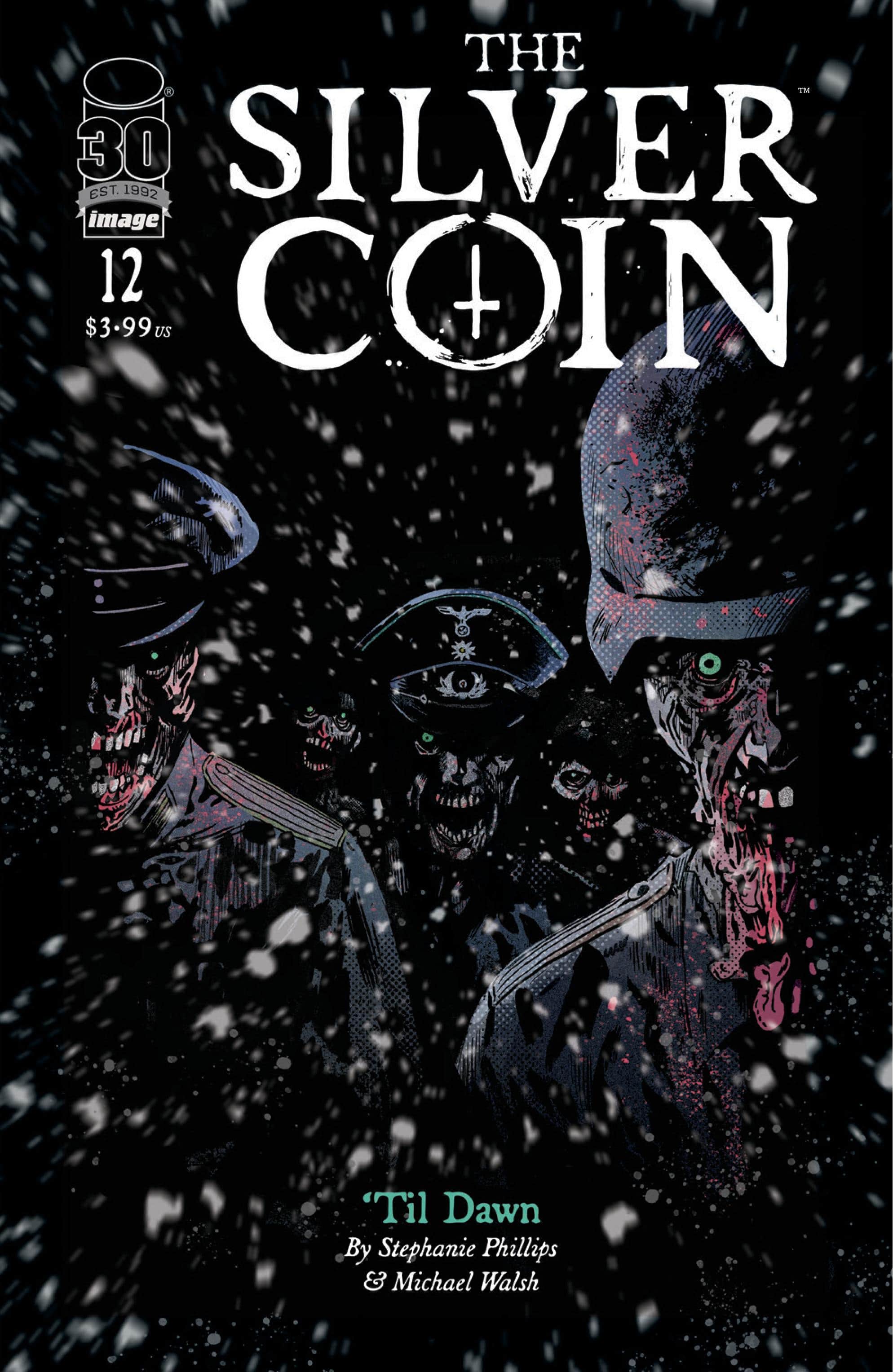 It’s early 1945 and the end of World War II is still months away. A small unit of American soldiers faces a contingent of German troops in the Italian Alps. When a fierce snowstorm traps the Americans, THE SILVER COIN asks the soldiers to pay a steep toll if they want to survive the night. A new chapter in the acclaimed horror anthology from STEPHANIE PHILLIPS, JAMES TYNION IV, JOHNNIE CHRISTMAS, PORNSAK PICHETSHOTE, and MICHAEL WALSH is out this month.

The phrase ‘Horror of War’ is an excellent writing prompt, combining two genres to yield great results. There’s an overlap in the genres’ use of tension and terror, manipulating the audience through quick, visceral action in many cases. But below the surface and visual level, there’s – usually – an unspoken existential terror about the loss of innocence, desensitization, and warped perspective of events. It’s not surprising when stories tackle that fusion of the two genres, and the good combinations work to play up that tension and terror between the surface-level veneer and the deeper, chilling implications. It’s why that combination of war and horror is the perfect place for the interconnected anthology series The Silver Coin to go, and dig into the rich thematic set-up.

Issue #12 of The Silver Coin sees Stephanie Phillips taking on writing duties for the issue, working along with series artist and letterer Michael Walsh and coloring from Walsh and Toni Marie Griffin. This issue shifts away from the greasy diners of the U.S., and instead takes the story back to World War II, the winter of 1945 specifically, and into the Italian Alps at the height of the war. From the opening panels, Phillips and Walsh establish the tone and setting, with a bloody body contrasted against the white show. It’s a startling image, and paired with the speech bubble stating “Push Forward…” hammers the theme immediately. Hart – a young Allied soldier – froze up in a skirmish with the Germans, unable to kill a man directly in his sights. He’s mocked by his squadmates, the only one in the squad who hasn’t been killed yet. The crux of Phillips’s script is Hart’s desire to switch the part of himself that refuses to kill off, and in a title all about a magic coin twisting wishes, makes it happen.

Phillips does a great job of foreshadowing the events of the issue, making every bit of dialogue and action feel interconnected. Discussions towards the beginning of the story explain exactly what’s going to happen later, but it’s done in such a way that the events still feel surprising. That level of craft matches the intensity of the thematic resonance of the story and plays with the notion of war stories. It’s easy to accept killing Nazis because of their portrayal in media, but Phillips still imbues a gravitas towards the decision to kill another person, letting Hart vocalize that struggle with dehumanizing the enemy. It’s an interesting conundrum to tackle in both the war and horror genres, which typically lean into the archetypes of good and evil. Instead, it’s humans against humans, and the line between the two is harder to draw. Ultimately, Hart can cross that line with help from the titular coin, but the result is just as blurred thanks to Phillips’s execution of the monkey paw trope.

Phillips isn’t the only one getting to mix and match genres, with Walsh’s art mixing horror and war imagery to tell a complex story. He’s able to bring his grotesque character designs and visceral eye for detail to multiple skirmishes, and the scenes that get left behind when soldiers engage resemble something more akin to a slasher or zombie tale. That gore and melted anatomy go a long way to sell the surface-level horror, while twisting the idea of humanity vs inhumanity on the battlefield, feeding the thematic motifs of Phillips’s script. In the issue though, it’s the lettering that stands out, Walsh using the SFX for gunshots to form panels when Hart starts to kill, and it gives heft to those shots as Hart is literally encased in the violent acts. The other BLAMS of the gun stand out on the page as well, but it’s in those SFX-constructed panels that the full effect is shown. The flow perfectly with the regular panel work Walsh puts to the page, and can’t help but draw the eye. It’s one of the most effective lettering choices I’ve seen in a comic recently and speaks to Walsh’s strength as a visual storyteller on the page.

The Silver Coin #12 is a harrowing story of war and its horrors, revealing how once the line between humanity and inhumanity is blurred, the darker and more existentially terrifying we as a species become. Phillips brings a strong script that masterfully sets up that thematic conflict, echoing it across the issue. That works in tandem with pitch-perfect art and powerful lettering from Walsh, which sells the gravitas of the themes. This is an excellent issue to jump into if you haven’t read the series before and is a great place to test the waters for the level of horror and visceral of the book. It’s a shame that these collaborations and stories are mostly one-shots, as Walsh always makes sure to leave the audience wanting more of whatever genre he and his collaborator works in for the issue. I sincerely hope that Walsh has a chance to return to war comics in the future, along with every other setting he’s had the chance to jump around to in this series.