The Silver Coin #13: The Origins of Sin 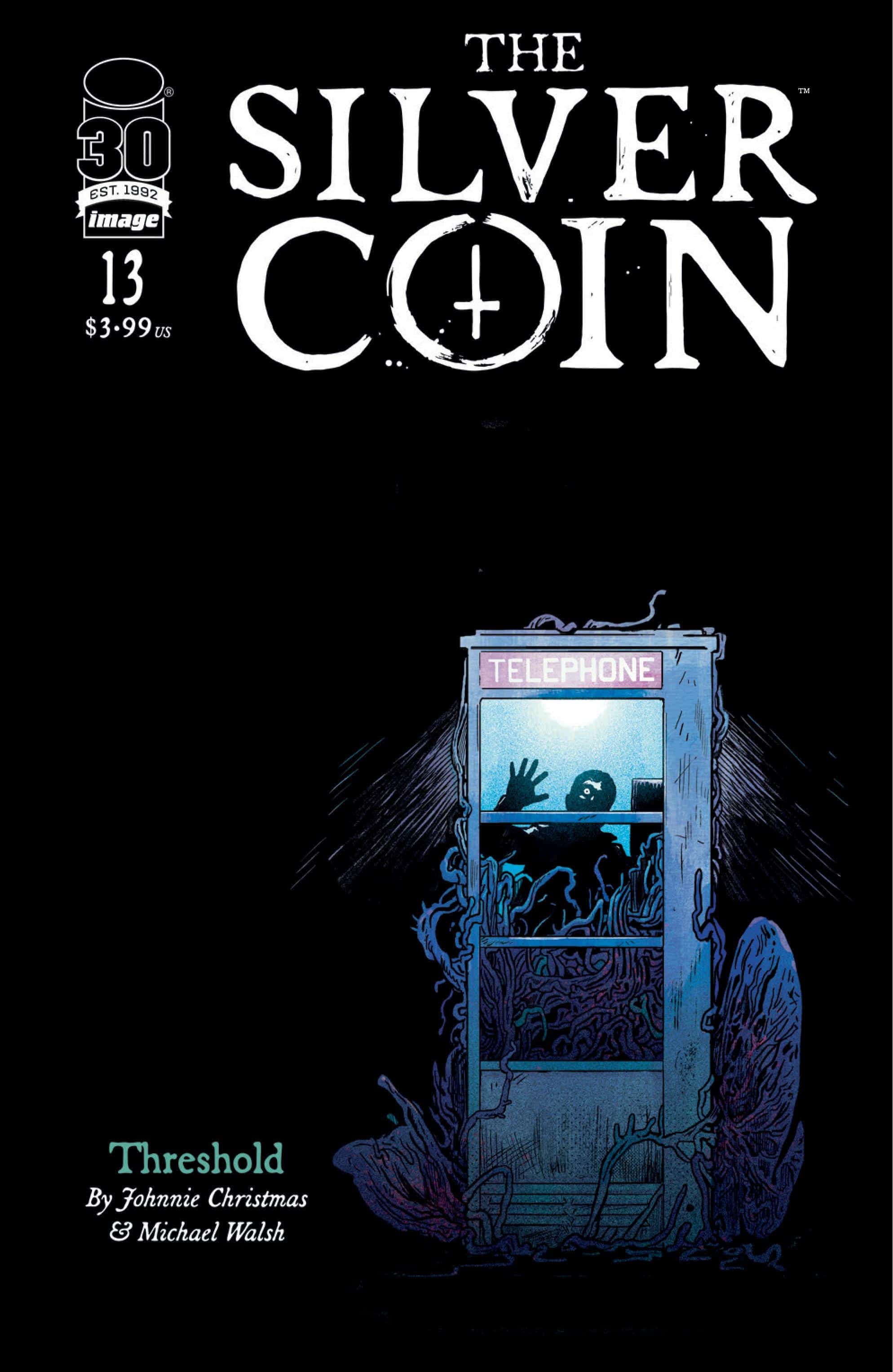 In this twisted tale set on New Year’s Eve, 1999, Y2K anxieties boil out of control as an even darker nightmare befalls an expectant mother. THRESHOLD, a new chapter in the acclaimed horror anthology THE SILVER COIN, from JOHNNIE CHRISTMAS, JAMES TYNION IV, STEPHANIE PHILLIPS, PORNSAK PICHETSHOTE, and MICHAEL WALSH, is out this month.

Content warnings are a fascinating element regarding their relationship to the textuality of a work. Even if a warning is added for a purely ethical or business decision, offering a simple notice about what type of work is about to be shown, alters the perception of the audience going in. In many ways, it shares a similar context as a foreword or preface, supplying expectations that may or may not be intentional from the creators.

In serialized fiction, a warning takes on a new facet when it is attached to a specific entry into the larger story. There is an acknowledgment that certain themes, images, or scenarios will occur in the work that goes beyond the baseline expectations of the series. In most respects, there is neither an inherent good nor bad connotation to the warning, but it does alter the unfolding story and how an audience may respond to it.

The Silver Coin #13 – written by Johnnie Christmas, with linework and lettering by Michael Walsh, and coloring by Toni Marie Griffin and Walsh – leaves World War II behind and throws its audience into the burgeoning turn of the 20th century, centering the issue around the looming threat of Y2K. Young couple Karena and Brett are expecting their first child, and seem over the moon about it, but as time skips and reality sinks in, the couple leaps at each other’s throats.

As tensions build and Y2K inches closer, Karena experiences contractions as the silver coin comes to her. Once she takes hold of the coin, Karena is transported to a twisted plane and greeted by a monstrous representation of her baby. The space resembles a corrupted inverse of the woods many of the series mythology issues have taken place, a world of blood and bone. It’s a grotesque meeting of mother and child that’s cut short as Karena returns to the real world as her water breaks.

Brett finds Karena slumped over, the baby threatening to come early, and rushes to take them to the hospital. A violent crash occurs due to the coin, and Brett is killed, and an older version of their child appears, still deformed by the coin’s influence. They offer to bring back the wreckage of Brett, but before a bargain can be made, the script diverts back to the real world, with Karena now in the hospital, aware of the evil trying to corrupt her child. As the new year comes into focus, so too does the evil, and Karena is taken back to the dark place once again. This time, it is filled with an evil manifestation of the coin, and sacs of children waiting to be born into the world.

The metaphor comes into focus and this is Karena’s body, the sacs being eggs waiting to be fertilized and give birth to new evils. Her son – now grown into an adult – is the figure, and explains what needs to happen. He prepares to make her the queen of a new sin, adorned by a crowd with the eye of the coin in the center before Karena can break the coin’s control and give birth to her child. Though news clippings reveal that all of the babies born at the dawn of the new century have eyes in the same green as the coin’s, and the implication is Karena is no longer in touch with her child, it is ambiguous to the child’s fate.

The parallel suspense of Y2K and the twisted childbirth is a great framework for the issue, leading to an interesting conclusion. That conclusion, which is reminiscent of the ending to Scott Snyder and Jock’s James Gordon Jr. plotline in Batman: The Black Mirror, sees the corrupted baby being stopped before it can be born into the world, but the evil of the coin has instead infected the entire maternity ward that night. The idea of a poisoned youth working like a time bomb to society is a chilling thought, and Christmas’s script feeds that territory with a deliberate choice to not give answers at the end.

The content warning makes the art seem even more gruesome even though Walsh’s style has not radically changed across the series. Walsh nailed the general look and atmosphere of the story with issue one and has consistently delivered. Many of the stories saw the writer’s script working to catch up to the level that Walsh has exceeded in the art department, with some scripts unable to keep in step. Here, that is not the case, Christmas’s script gives plenty of rich symbolism and thematic relevance to Walsh’s linework. The pair work in tandem to represent the horror of bringing pure evil into the world, and the havoc that childbirth can wreak on a woman’s body.

Walsh gets to dip back into the extreme body and Lovecraftian horror in this issue, specifically with the baby’s design. It’s a writhing mass of muscle and flesh linking disproportionate anatomy and viscera. The eyes – a sickly green – are misshapen and resemble the eye that adorns the titular coin. It’s an important detail that feeds into the issue’s conclusion, with the evil of the coin influencing a whole generation of babies. Walsh also handles the horror of the entity’s progression masterfully, capturing those same general twisted portions even as the baby grows into a fairly average adult man. The hints of green in his eyes are the only indicator physically of the coin’s evil influence.

The Silver Coin #13 continues the trend of excellent horror stories, recovering from a slight unsteady arc to pack a punch with this current line-up of writers. This issue, in particular, feels thematically relevant for the times, and will only continue to do so as Americans grapple with a post-Roe society. Walsh meets that harsh thematic content with a style of body horror that exceeds anything seen in the series before and makes the stomach knot both on the page and in the reader. It’s a twisted instance that sells what makes this book special and lives up to the content warning provided at the beginning of the issue.

The Silver Coin #13: The Origins of Sin