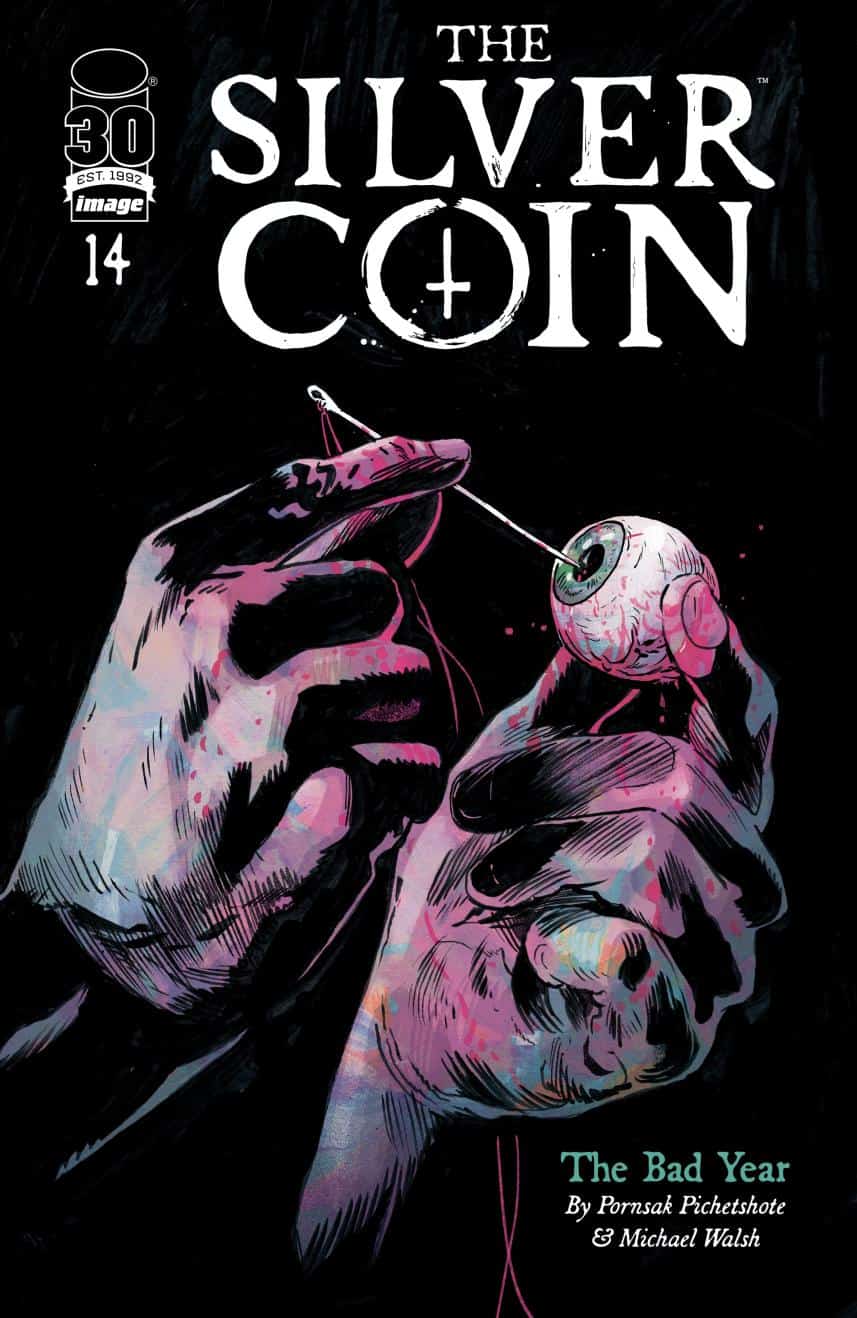 Lauren and Darren were working through their issues when the bad year hit. 2020 was when the world caught fire, when their relationship went to hell, and when a strange coin pushed things one step further. The latest chapter in the hit horror anthology THE SILVER COIN, from JOHNNIE CHRISTMAS, JAMES TYNION IV, STEPHANIE PHILLIPS, PORNSAK PICHETSHOTE, and MICHAEL WALSH, is out this month.

Recent headlines have done a great job encapsulating the ways that the media and a large swath of the population have abandoned the notion of a pandemic. Across news outlets like NPR and The Washington Post, discussions of super dodgers, i.e., those who, after almost two and a half years, still haven’t caught Covid-19. While these publications discuss the concept from a scientific standpoint, they’re also contributing to the mythic nature of the event. In reality, it’s a combination of luck and extreme caution that help those who have skirted the virus continue to do so. Along with a measure of privilege as well. This reviewer falls into that category of Covid-free, but make no mistake that the living conditions are better than most.

I’m able to work from home and have a strong network of grocery and food delivery options. I don’t have children that need to go to school, and I’m in good enough health to avoid doctor’s offices. Pairing that with an abundance of caution, not going to restaurants, movie theaters, and even the local comic store, the conditions are set to dramatically shrink the chances of exposure. I’d be happy to be wrong and learn that I’m some X-Men in waiting with a gene that’s helped keep me from catching the virus, but in reality, it seems that I, like many others, have not given up practices that keep us safe but isolated.

The reason to bring this idea of contrasting notions of life during Covid up, both for the ones with privileges like my own, and those who have no choice but risk exposure, is due to The Silver Coin #14. The issue – written by Pornsak Pichetshote, coming off the exceptional The Good Asian, with art and lettering from Michael Walsh and coloring by Walsh and Toni Marie Griffin – is the most timely story yet, inching out the last issue by taking place at the height of the pandemic. It centers on a couple, Lauren and Darren, as they navigate the bad year of 2020. Pichetshote drops in events that feel like twenty years ago, reminding us that the George Floyd protests, the election, and so much more were only two short years before.

The bulk of the issue’s plot is Lauren and Darren growing apart, the harsh realities of the world causing them to realign and want different things. Darren’s a screenwriter who’s made the money and opportunity to stay home and work, while Lauren’s an actress that was on the cusp of a big break before the world shut down. While he’s content to stay indoors and survive through the virus, Lauren is the opposite, moved by the issues of the world, ready to volunteer to help secure voters and protest injustices.

It’s diametrically opposed worldviews and responses to societal level traumas that many of us can relate to. It’s also in that opposite that the titular coin comes in, influencing Darren and Lauren’s friend Colton, who seemingly has fallen under the influence of evil.

That’s all I’ll write about the plot and beats of the issue, as Pichetshote’s twists and turns deserve to be experienced fresh. Reading through the first time, the plot was going in one direction but pivots hard, and on a second read-through, it became abundantly clear. It was such a gut punch that I had to set the comic down and take a few moments, just ruminating in turn. Pichetshote’s script does a great job twisting the knife at every moment, using experiences that are so topical and still feel like raw nerves to sell the brutal nature of this issue in moments that don’t feature demonic spider creatures or visceral eyeballs.

The standout line from the script is an off-handed comment that Lauren makes during an argument about how the couple considered moving to Canada during everything. It’s a quick moment, but it is a perfect representation of what makes this script amazing. It’s equally quick and punchy, delivering real emotion that feels ripped straight from someone’s recent experiences.

That emotional resonance is ever present in Walsh’s linework and as well, with the artist getting to play with the facial expressions and use of masks in the issue. Since this issue takes place in such a modern context, it feels like less of the work had to go into the set designs and texture of the world (which Walsh does masterfully in every issue). That energy gets redirected, showing when Darren and Lauren are locked into arguments. Walsh treats the reader to plenty of close-ups with the two yelling, veins building in their necks and foreheads. The panel layouts are equally simple but do so much to convey these opposing worldviews. There’s a six-panel page that features one half with just Darren and the other Laura, and it might be the most compelling page of the issue, thanks to Walsh’s infusion of verbal language that shows just how apart the two have gotten.

That page ties in with one of the more grotesque images in the book, which sees a character being tortured by a coin-possessed freak. Reminiscent of the New 52 Joker (the one missing his face), this figure works to sew eyeballs with the sickly green iris of the coin all over a person’s body, essentially infecting them with the coin’s evil. The process of the sewing is done over a page of sixteen panels, and it’s macabre and captivating all at once. Like the actual motion of sewing, which becomes mechanical after repetition, and almost hypnotic, Walsh manages to convey that feeling to the page and its flow. It’s hard to look away, but it just feels wrong to keep watching.

The Silver Coin #14 is a chilling but mesmerizing look into a trauma that many of us are still living through, utilizing horror to heighten those feelings of helplessness and despair. With Pichetshote’s ability to weave emotional beats into moments of utter terror, Walsh and Griffin make this issue the most timely story in the interconnected anthology series by matching that craft. Everything about this book, from the story, to the plotting, and the art, is both twisting and timely, delivering what might be the best issue of an already strong series.