The Silver Coin #7: Heads or Tzompanco 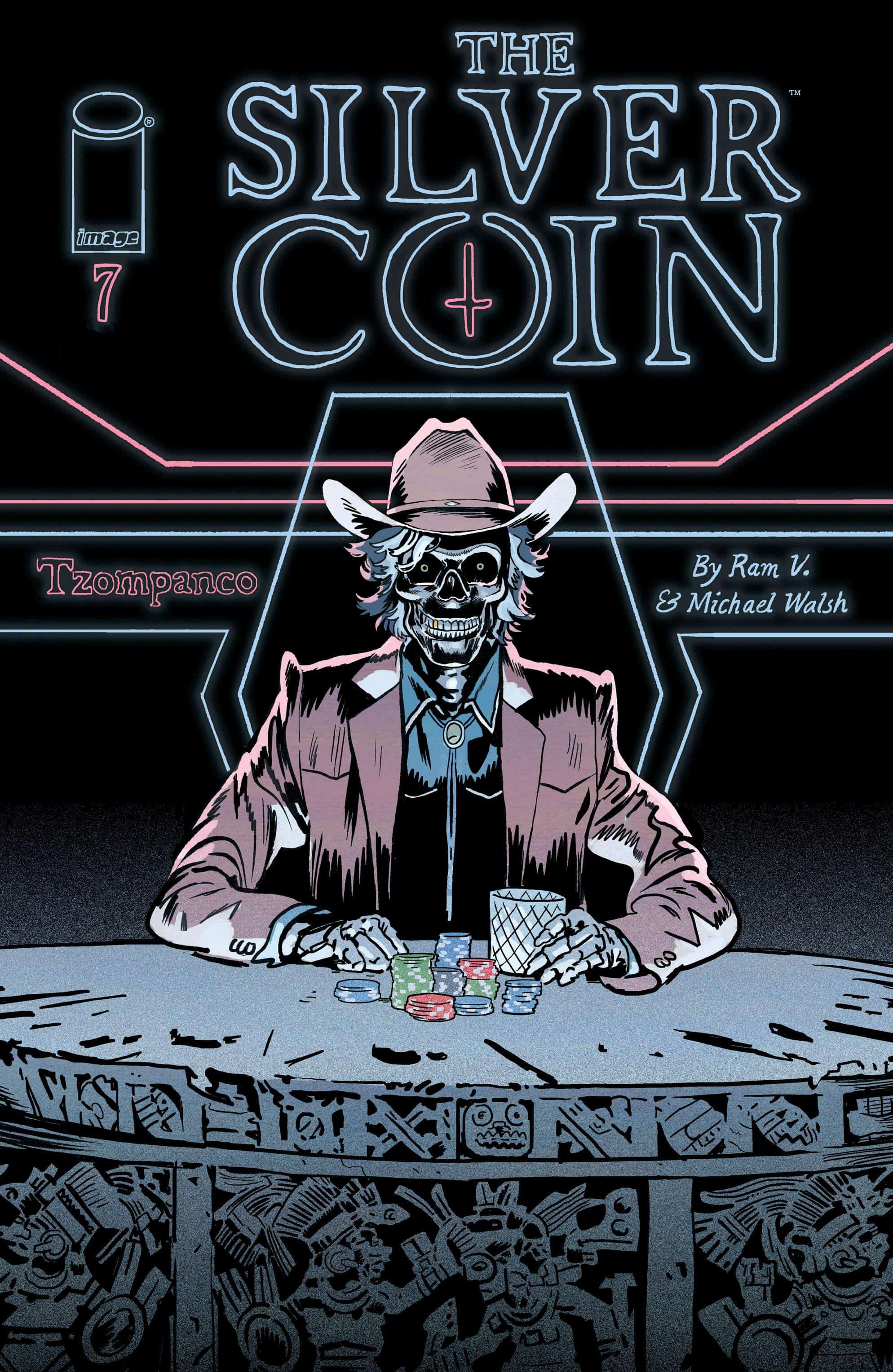 From creator MICHAEL WALSH and RAM V (Swamp Thing, BLUE IN GREEN) hit horror anthology THE SILVER COIN heads to the land of jackpots and washouts.

For the first time in his life, Lou Prado is on a winning streak. Maybe it’s the new casino or maybe it’s the lucky coin in his pocket, but all of a sudden, Loser Lou’s bets can’t go wrong. He’s about to make the gamble of his life—and the stakes are deadly high atop the Tzompanco.

Done in one comics are the jackpot that the industry doesn’t payout too often these days. To tell a satisfying story with a beginning, middle, and end in the span of 22-24 issues is a difficult task, especially in a world focused on the bigger threat, the bigger story, the bigger arc. A book like The Silver Coin tackles both of those issues, weaving an intricate thread through the seemingly random time and events of the series while also raising the page count. The book presents snapshots into the horror of a coin granting its holders’ desires, providing an excellent framework for the book to tell self-contained stories. What sets The Silver Coin #7 apart, as scripted by Ram V, with art, lettering, and partial colors by Michael Walsh and additional colors by Toni Marie Griffin, is its expansion of the mythology of this world.

V’s script brings a sense of heft and weight to the burden of the coin and feeds the sinister mythology behind the coin. While the series is the brainchild of Walsh, it’s a great example of what a creative partnership brings to each singular issue. There’s a lyrical undercurrent of the book, as a narrator contrasts a tale of the Tzompanco and ritual sacrifice with the rise and fall of a down on his luck gambler. The man, Lucky Lou, wins a game of slots, and the titular coin finds its way into his possession. He uses it to turn his luck around and ascends further and further up the casino, winning every game he enters, and being rewarded with money, the finer foods, and an endless parade of sexual encounters. That physical rise is set against a moral failing, as Lou calls his partner, and promises to deliver her a vacation and life away from their mundane lives. As Lou reaches his lowest but is propelled to the top of the Tzompanco, he is sacrificed by the book’s narrator. The ritual mirrors that of the story that’s been told throughout the issue and Lou is discarded. It’s an obvious twist, but still effective in its execution, revealing more about the world and its underlying mythology of the coin. There’s something larger at work going on in between the pages of the series, and V shepherds in the new twist to the book’s overarching timeline.

Walsh’s art is evocative and expressive and only seems to get better as each issue hits the spinner rack. With each installment of the series taking its readers across time and space, Walsh gets to spread his wings and explore a multitude of images and subjects. The art in this issue masterfully moves between ancient Aztec society and the debauchery everyone has to come to know from Las Vegas, working with V’s narrations to bind these two points in history together. The expressions and bodies that Walsh renders are grotesque and convey a world of darkness, grime and hardships. Every line and panel carries that weight, a personal tragedy or horror lurking in the corner, waiting to descend upon the protagonists and inflect new pain and traumas. It’s a masterful throughline, only bolstered by the shared continuity of Walsh’s letters and color.

What sets the perfect continuity of this series, just beyond Walsh’s linework, is the book’s coloring. The use of blues and purples across each installment, from the neon of the arcade games to stage lighting of seedy dive bars, or in the case of #7, the revelry of the Aztecs and the lighting of the casino. The color sets a common thread across all of these various points, with nothing in common other than a sense of dread and a little coin. Walsh and Griffin’s colors help to reinforce the lack of luster in this world. The colorwork of the series ties the various horrors and violence, the tragedy and myth, into a unified story in the same way various panels are brought together to weave a story on the page thanks to those same colors.

The Silver Coin #7 is a rewarding read both at the macro and micro levels. On one hand, it is the classically tragic story of a gambler who almost reached the top, but has the world taken from under them. On the other hand, it's a story about the sacrifice of a man built up to the best and is cut down by a dark designer engineering fate. In both cases, the story and myth of the Silver Coin is a compelling reason to pick up this issue and to go back and read the previous installments, to experience Walsh’s stunning art and a cavalcade of talented script building to this point.

The Silver Coin #7: Heads or Tzompanco