The Silver Coin #8: The Janitor of Wall Street 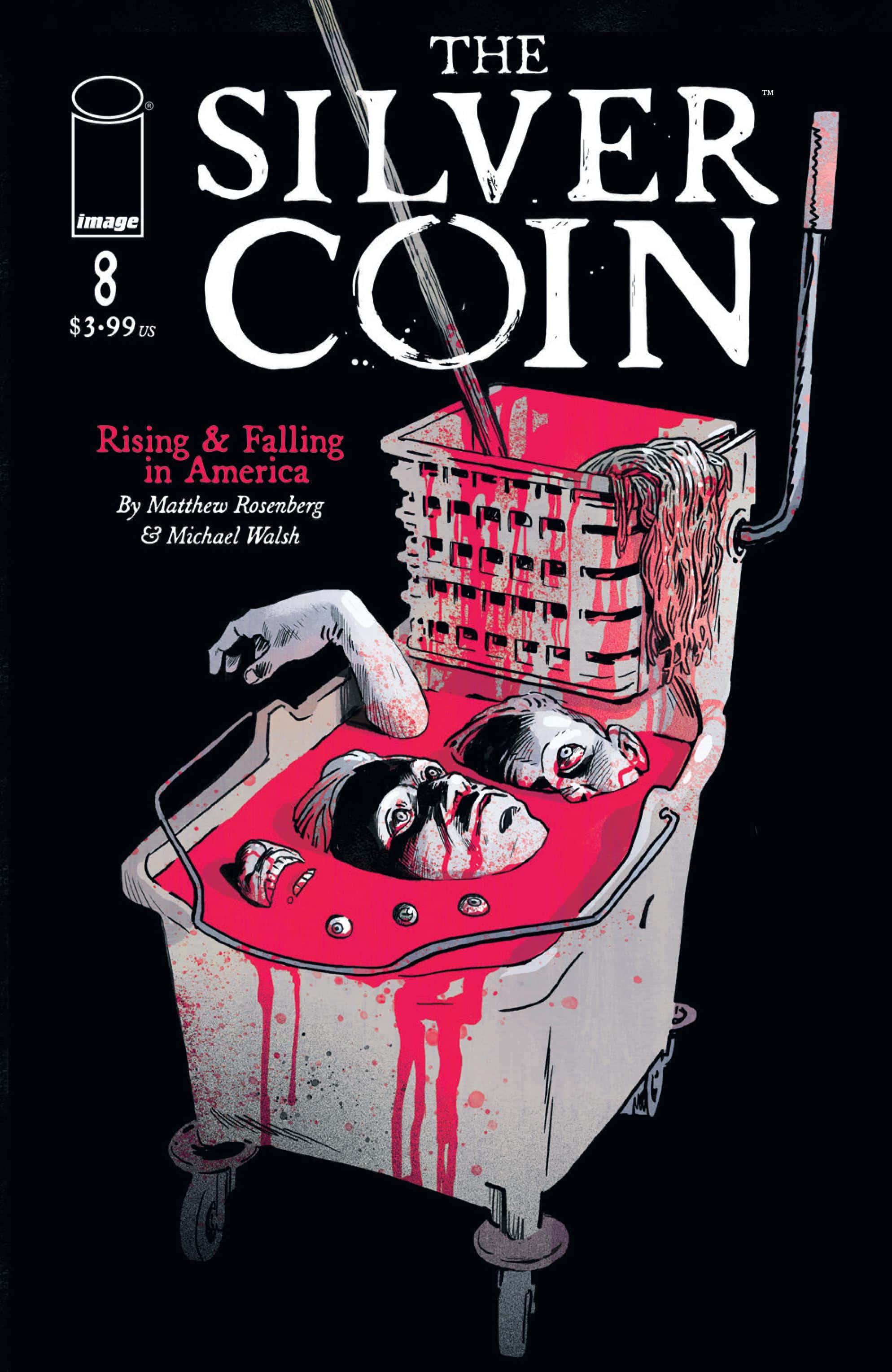 When an executive at a 1960s stock brokerage acquires a collection of antiquities, the gap between the haves and the have-nots becomes painfully clear. The price of THE SILVER COIN keeps going up, even as the fortune of its owner plummets.

A hallmark of good horror is not what’s shown or told, the implicit details that creep into the mind of the audience and linger. A stylistic choice or clever trick of the light does a lot more to enthrall the senses than a visceral slashing or stabbing. In comics, there are more opportunities for that implicit horror to rear its ugly head, using formal elements like panel compositions or lettering. The Silver Coin #8 – written by Matthew Rosenberg, with art and lettering by Michael Walsh, colors from Toni Marie Griffin and Walsh – plays with the formal elements of the issue to revel in the horror of the titular coin’s influence on seemingly good people.

Rosenberg’s script opens in a high rise in a Wall Street highrise in the 60s, and immediately sets up the theme of the issue, specifically the role luck plays in the ascension to the top of the social hierarchy of the American Dream. Even though the issues are separated by time and space, the progression from the previous issue’s focus on the Tzompanco is a fascinating movement, as these two issues feel more thematically related than the previous have previously. Rosenberg’s script feels like an echo of Ram V’s story from issue #7, hitting a lot of the beats of a down on their luck character falling to the influence of the coin, to rising into a world of crime and sin, before being drawn to their death as a result of the coin.

The difference, however, between the two stories lies in the motivations for the carnage that occurs. In V’s story, death and violence are a sacrifice that holds meaning and serve as a means to an end for the society of the Tzompanco and its modern equivalent. In Rosenberg’s script, the janitor’s death is meaningless and random, serving no greater purpose or reason. It’s an indictment of capitalism through and through, grinding the working class as the rich get richer. In a story with a premise that extends across seemingly hundreds of years, it’s horrifying to know that the coin’s evil always leads to suffering and death, no matter the context or situation presented.

Walsh’s art remains top-notch in the issue, bringing the horror and anguish in the faces of janitorial staff forced to survive off the crumbs of the uber-rich. The issue’s opening page is a stunning example of Walsh’s skills for layouts, establishing a nine-panel grid using the windows of a high rise to form the panels. Walsh employs the layout for a substantial amount of the issue, only breaking form in key moments of the issue, like rendering the sickening horror of a bus running over a person. It’s a fantastic way of forcing the mindset of a social hierarchy established in the financial world, and the ability to escape that rigid structure by employing damaging and cruel acts of violence.

While the issue’s composition feels like a stunning display of technique influencing the story, the true element that refines the horror of the issue is Walsh’s lettering. It’s often said that good lettering is invisible to the average reader, as it allows for the writing and art to convey the story without distracting the reader. But in many cases, the lettering can either render a book difficult or transcendent based on the merits of the lettering. This issue falls in the latter category, with Walsh’s use of a blurred word balloon to reflect the frame of mind the issue’s protagonist enters while enthralled by the coin. The option to blur the dialogue gives the madness an almost eldritch sense due to its lack of context or understanding. It’s the type of existential horror that gnaws at the reader as they come to understand they are insignificant in comparison to the forces of evil in the world.

With issue #8, The Silver Coin has begun to enter a dialogue with itself, binding themes and plots together across the titular coin’s storied history. The issue is a triumph in form and drafting horror from the technical elements of the book, showcasing Walsh’s talent as both an artist and letterer. If there was any doubt that Walsh is one of the premier voices in modern horror comics, then The Silver Coin is murdering that doubt and reminding us all that good craft is the scariest monster of all.

The Silver Coin #8: The Janitor of Wall Street