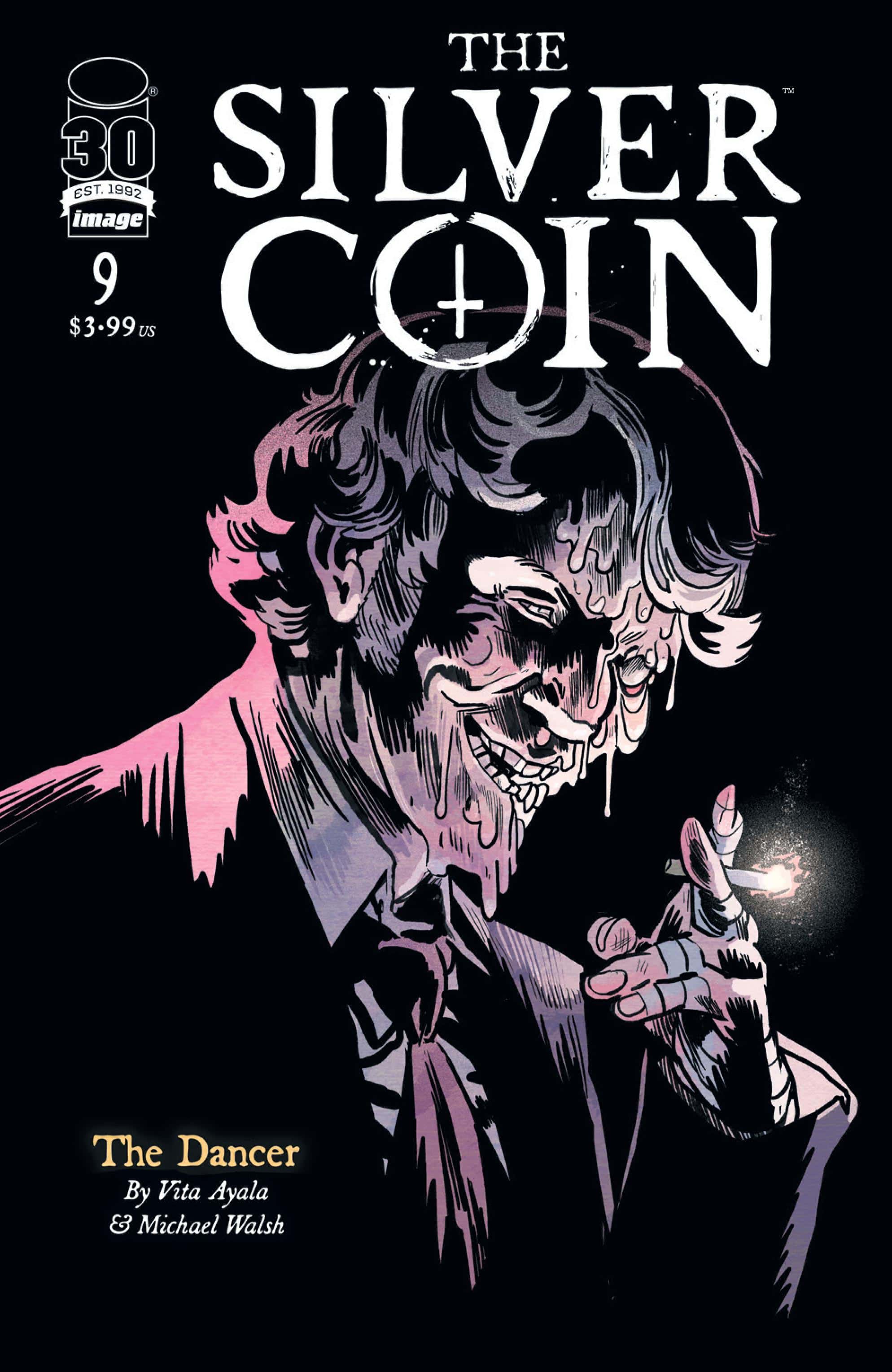 The South Bronx is on fire and a crooked cop can clear his debts if he helps it burn. But with each dirty deed, THE SILVER COIN gets hotter to handle. A new episode of the hit horror anthology from VITA AYALA, JOSHUA WILLIAMSON, RAM V, MATTHEW ROSENBERG, and MICHAEL WALSH is out this month.

Desire and its malleable nature are the reason why monkey paws, Faustian bargains, and wishes are compelling narrative devices. The materialization of a character’s innermost desires and a twisted reflection of their even deeper needs is a rich and fertile ground for conflict. That tension is equal parts internal and external, manifesting conflict and using it to tackle subtext in the physical world. The Silver Coin is a series built on that conflict, and issue #9 – written by Vita Ayala, with art by Michael Walsh and colors from Walsh and Toni Marie Griffin – is no different, letting the seemingly eternal coin wreck havoc on its wielders.

Ayala’s story is a mixed bag, equal parts fascinating world-building and lackluster characterization. The detective that we follow feels like a thin caricature of a dirty cop, with a gambling problem and a sadistic streak, but little else. What’s lacking in the writing is a drive or motivation for everything he’s willing to do. The appeal of a good deal with the devil story is the intrinsic need that a character has, and the lengths they’re willing to go to obtain it. It’s clear the detective is in debt and wants to get out of it, but that’s not a strong enough desire to generate the hubris the rest of this series has. The surface desire to escape that debt is there, but there’s nothing deeper, no need is ever revealed that adds to the tragic through line of the series. Nor is there a twisted need that becomes the detective’s undoing, his story ending due to an external force, not an internal failing.

What’s frustrating about the issue and Ayala’s script is the backdrop and the setting of the book are a thousand times more interesting, and almost feel like a one-shot for a completely separate book at times. None of the story beats seem that dependent on the titular coin, as the rise and failure of the detective could have happened without it. The systematic burning of the Bronx is a gripping story that many, especially those reading from outside of New York, will probably not know, and the horror almost aligns more with human nature over the evil of the coin. Those horrors fail to intervene in an organic way that the various themes/desires of previous issues have with the coin. This isn’t to say the writing of the issue is bad, but it feels like it should have been its own story and project, rather than a part of the saga of The Silver Coin.

Walsh’s art continues to thrive, rendering both the concrete urban decay of the Bronx and the metaphorical nightmare of burning flesh to show that horror comes in both the physical and abstract. Human flesh and faces melt like a Barbie trapped in a microwave, completely unaware of their damnation. It’s grotesque, and compelling to see, macabre dance of the issue’s theme and eventual end. Walsh jumps from this to the grit and grime of the Bronx in a moment, showing the historical horrors that people were forced into at the time. Little details like the rotting walls and entropic interior shots reveal just how much the neighborhood has sunk, and the fire sometimes seems like an improvement to the squalor.

The best part of this entire series is the way that Walsh can stretch various muscles and give jaw-dropping page layouts that feel original and organic to the story. In the last issue, it was the use of nine-panel grids to represent skyscrapers. This issue is all about a double-page splash, divided by the titular coin into phases like the moon. It’s a compelling method of presenting a montage, working with no captions or dialogue to show the upswing of the detective fixer career under the axis of the coin.

With a stronger desire or reason for the coin to gravitate toward, this issue could have been another hit. Instead, it’s just a by-the-numbers issue that coasts on the excellent art from Walsh. The Silver Coin is still a great buy, and the benefit to the book’s structure is that the next issue will bring something new and exciting, hopefully blending the strengths of both this issue with the previous.