Newly armed with the knowledge and powers he gained from the Green and yet lonelier than ever, Levi Kamei is pulled once more into service as the Avatar of the Green is summoned by primal forces to the city of London, where old ideas lie buried, slowly leaching into the reality above. The scars of old wars and the dangers of past ideologies resurface as the Swamp Thing must team up with an old trench-coated acquaintance and his new protégé to save the present from the atrocities of our past.

We’ve reached the midpoint in the latest enchanting take on the iconic keeper of the Green, The Swamp Thing, by Ram V and Mike Perkins. With Levi Kamei now donning the mantle of the Swamp Thing, we’ve been introduced to a vibrantly fresh take on the character with a story that captures the depths of familiar melancholy all the same. The result so far?

The Swamp Things is a book that is routinely praised as the best in DC’s current publishing lineup. 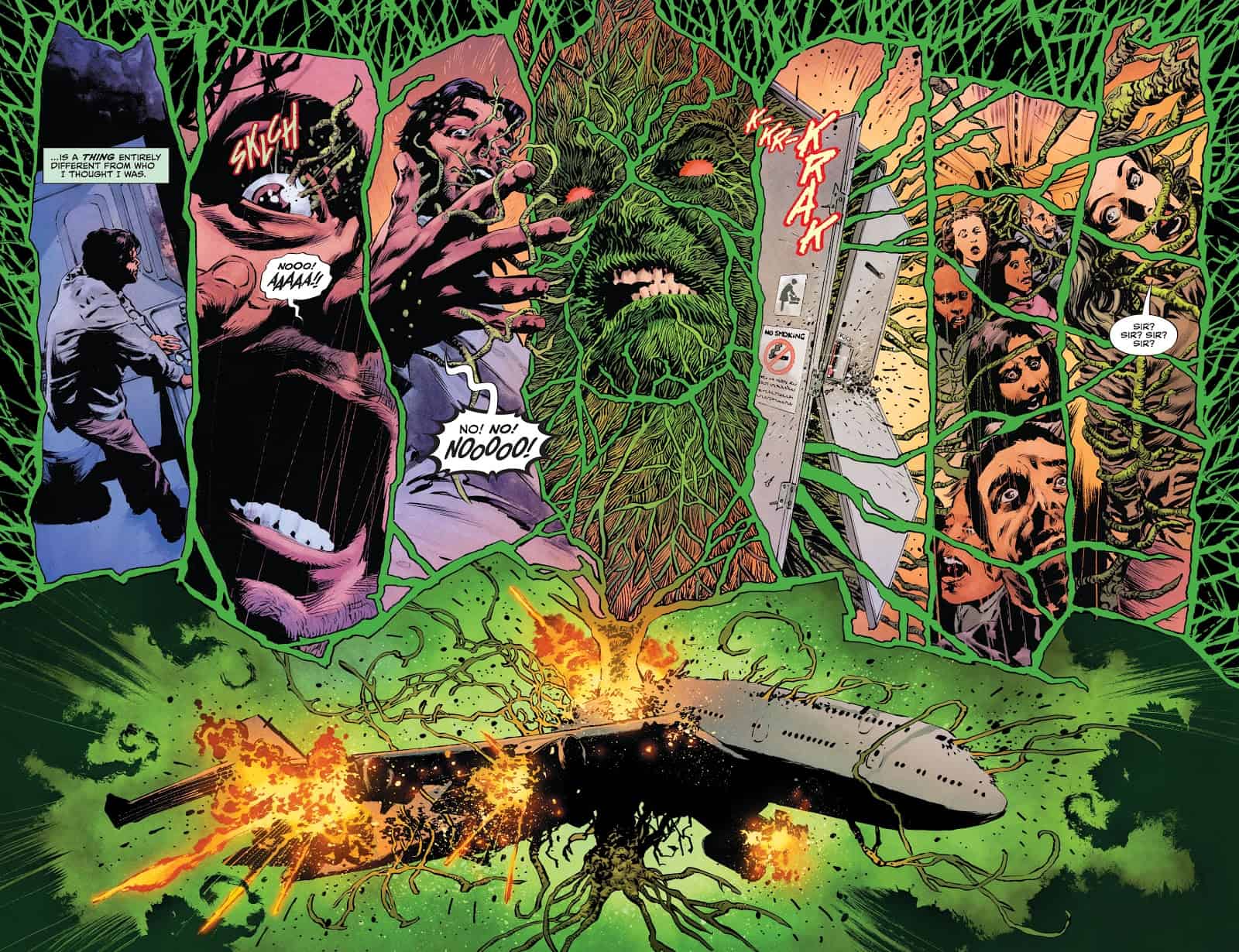 There are many different reasons for the success of The Swamp Thing thus far, and most will ring true to some degree simply because it is difficult to find a fault in such an intelligently entertaining and provoking story. Swamp Thing has always been one uniquely suited to gothic romance undertones by tapping into the conscious trauma inflicted into the relationship between Man and Nature, and while the first arc begins as a slow burn, we find these strengths brought brilliantly forward as the story unravels. It leans heavily into the psychologically terrifying roots of the character and pushes the narrative into high-brow horror territory that makes each issue difficult to put down.

To understand the relationship between Man and Nature, it’s crucial to first understand the idea that exists between the two. An idea that carries a memory with it, and it’s this power of memory that Ram V latches onto in making The Swamp Thing’s first arc so impactful. The Green isn’t just all of living Nature, it’s the memory of its existence as well, and as it envelops both Levi and the closest woman in his life Jennifer, the exploration of what it means to be Swamp Thing is meant to be found in that very power of memory.

Introducing a new character into the mantle of such a longstanding icon like Swamp Thing can be delicate, but with this approach to the Green and the permeation of memory, it’s an utterly seamless transition with Levi Kamei. As readers, we are thrust into his struggle in the first issue without much explanation. But like our own memories of Swamp Thing, Levi carries the same legacy of the mantle with him in everything he does. This bond instantly creates a characterization that fits perfectly into current DC continuity following the fight with the Upside Down Man in Justice League Dark as well as the overarching history of the character and its different iterations.

Levi is a natural evolution for Swamp Thing and a powerful statement on the importance of heartfelt representation in comics, but there is plenty of familiarity as well. The gothic romance undertones are more subtle as we see him fighting to find Jennifer lost amidst the Green and lured by none other than Woodrue, but the nuances are all noticeably there. The horrors that lurk within the tragic beauty around them are gorgeously presented by Perkins and Spicer, delivering visuals that hearken back to the classic Moore run with a pinch of Sandman influences. The result is a fever dream of swirling greens, shadows and emotional yet epic landscapes of expression. 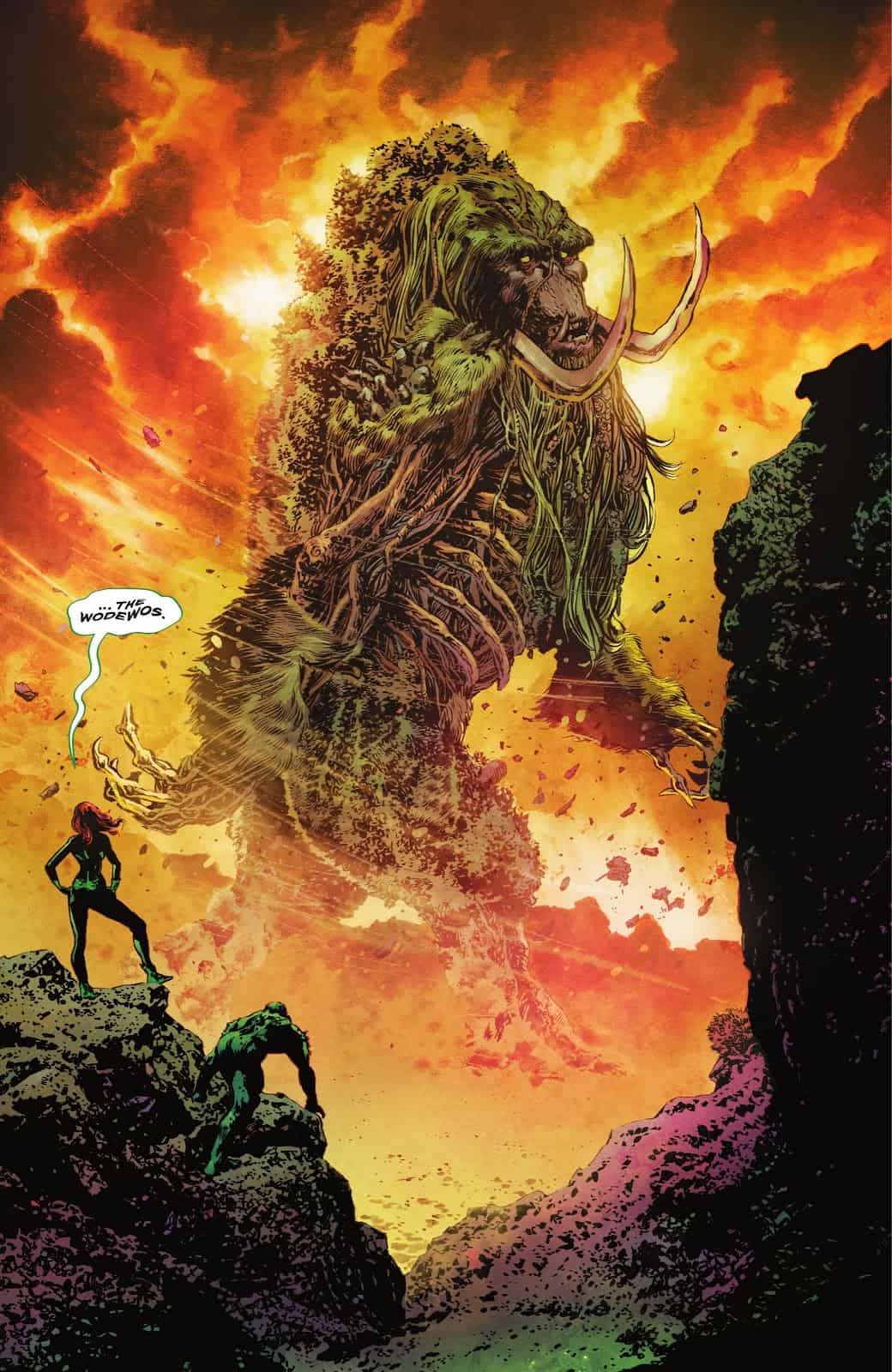 The story that we find is certainly original but it is aided by the inclusion of connective tissue to the greater DC Universe like cameos by Batman and more significant roles by Ivy. As an expansion of the Green, Ivy serves a wonderful purpose to ground the character in DC lore but honestly, who doesn’t want more Ivy? Without spoiling too much, the first arc weaves a familiar tale with fresh faces as we see characters like Levi and Jennifer become locked in a recognizable battle for their humanity set against a backdrop of uncertainty. The first four issues deal heavily with dark forces both new and old like the terrifying Pale Wanderer and the almost-annoyingly insistent Woodrue, and that is where we find such an intriguing mix of established lore contrasting the new introductions.

But The Swamp Thing #5 acts almost like a bonus. It brings in another character that writer Ram V is quite accustomed to writing with John Constantine and delivers a one-shot style story that elevates Levi’s role using what little experience he has. It is an interesting contained issue that does a great job at representing the overall approach at play, catering to our memories of the character and taking them in new directions.

The first arc of The Swamp Thing is already among the best stories told featuring our beloved Swampy. Levi dons the mantle without skipping a beat and the first four issues capture a fresh take on the dangers of the role and how it can consume those closest to the wielder without sacrificing what made us all care so much to begin with. The manifestation of an idea and the power it carries, like an Indian Banyam tree sprouting up overnight in the middle of the Arizona desert, is impossible to ignore and demands your attention in literally every page. Then issue #5 shows the potential of ideas in a way we’ve never seen before, putting into context the weight that Levi has taken on as Swamp Thing. It’s exactly what you want out of a story like this. 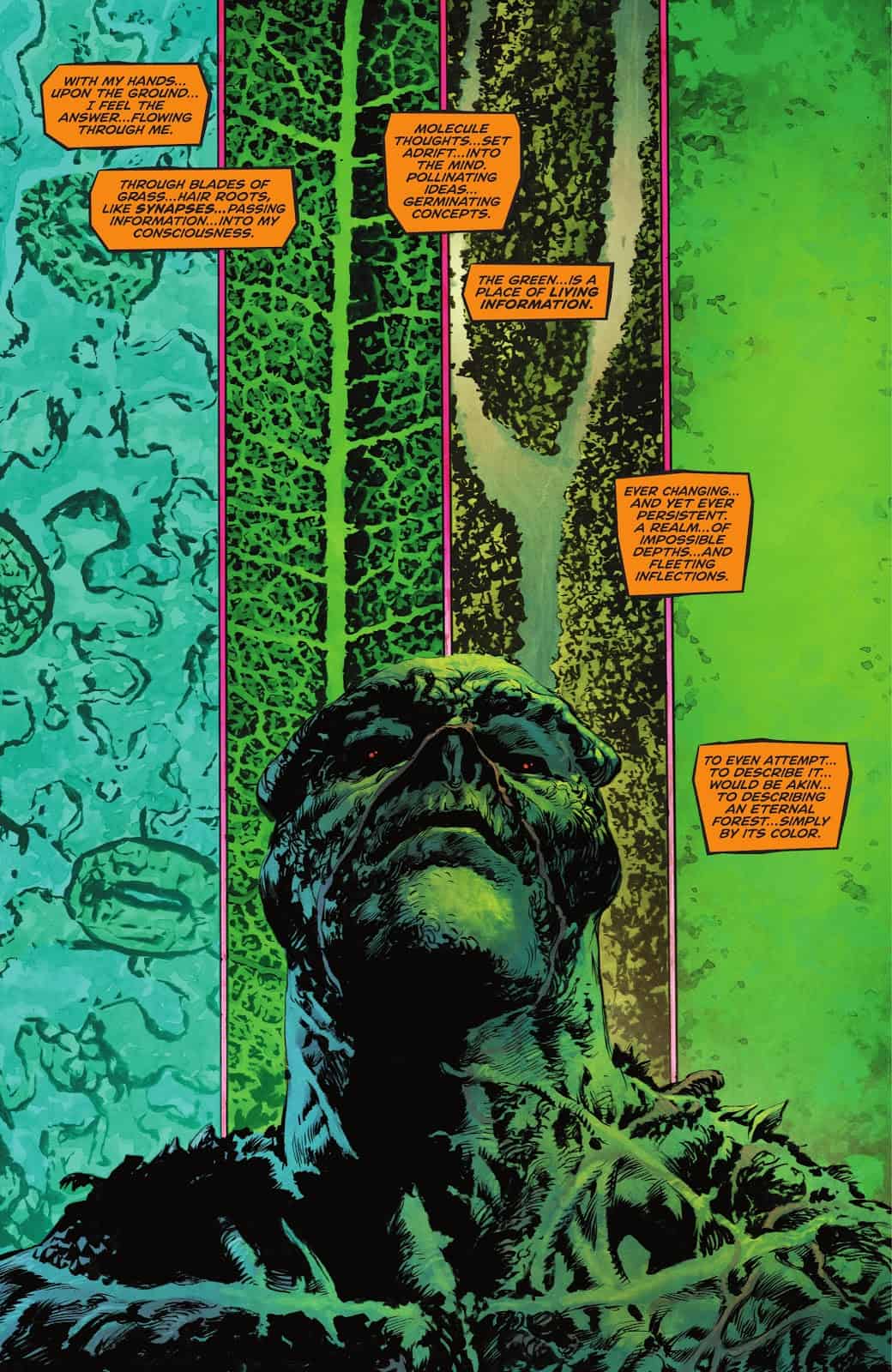 For those uncertain of what Levi taking over as Swamp Thing might mean and how the events of Future State might spill over into this new series, or even those who are hoping for a jumping on point to start reading Swampy, this is a series that is determined to surprise you in the best way possible. Thoughtful writing and incredible artwork help it to stand out as not just a horror comic, but a must read series worthy of all the praise I can give.

With another five issues left in the ten-issue series, there is so much left to explore and look forward to. If the remaining issues are as rewarding as what we’ve seen so far, we are all in for something special with this run. It’s one you will only continue to hear more and more people talking about so don’t hold out any longer, go check out The Swamp Thing and get ready for the brand new arc set to kick off in issue #6!

The first half of The Swamp Thing series in issues #1-5 leans heavily into the psychologically terrifying roots of the character to give readers an instantly iconic new take that is among the most thoughtful and visually brilliant in the character's longstanding legacy.