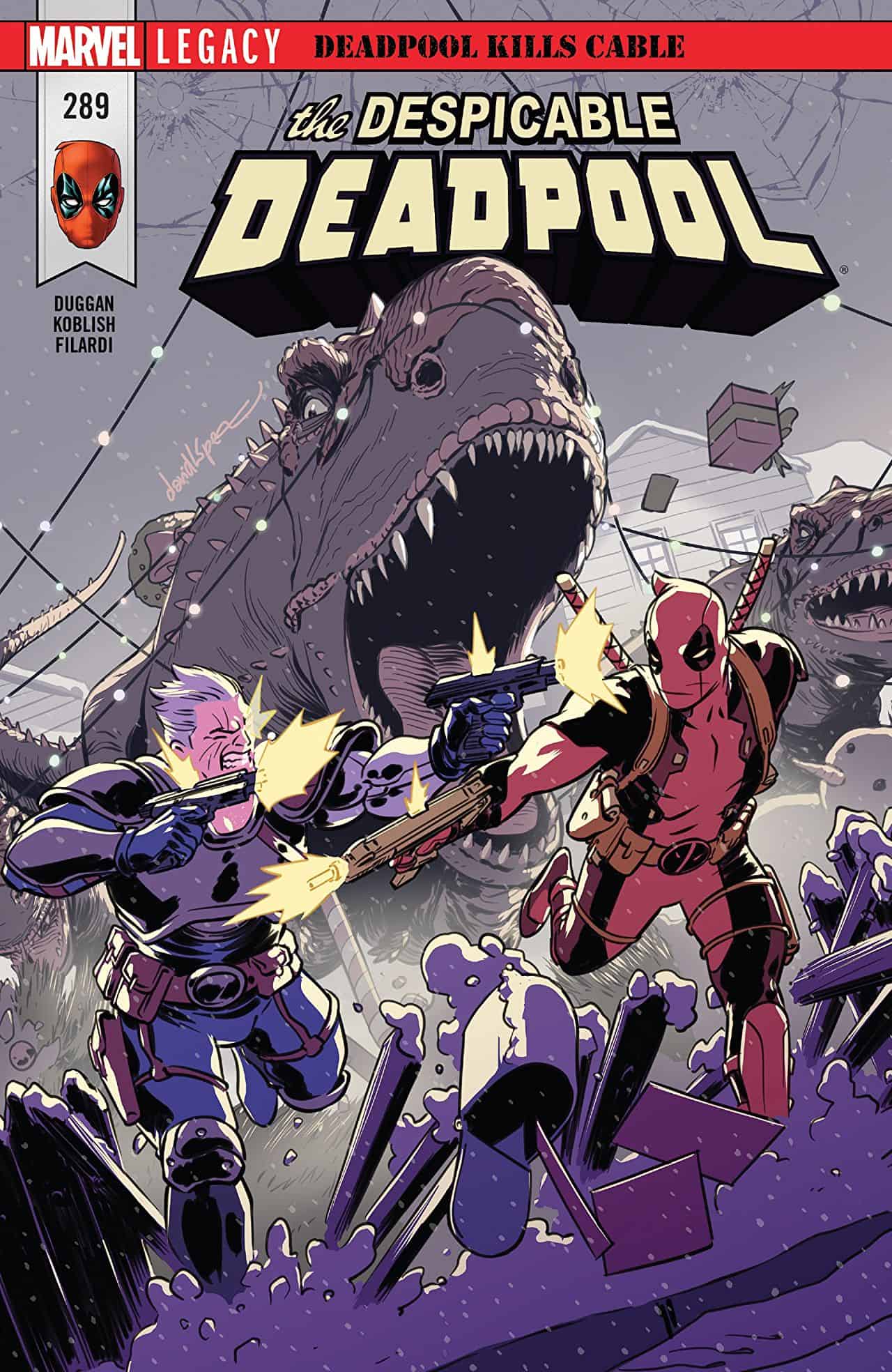 Deadpool and Cable finally join forces and take the fight to Stryfe in the middle of New York City! They just didn’t plan on time travelling radioactive vampire-dinosaurs to invade during their deadly standoff…

Cable’s evil clone Stryfe saved four lives for Deadpool in exchange for four deaths, but the first name on his new hit list is the real Cable! During his first assassination attempt, Deadpool was able to steal Cable’s mechanical arm just before time cops arrived to detain Cable. Luckily, Deadpool was able to use the time traveling arm to locate Cable’s position in a “Time Variance Authority” prison cell. After a murdering rampage through the facilities, Deadpool confronts Cable once again only to be outsmarted and overpowered. Cable tears his arm from Deadpool and explains that he will have to answer all of his questions about Stryfe when he wakes up. Deadpool begins to say that he actually isn’t tired at all when Cable shoots him in the face…

Deadpool finds himself lying on a beach watching the sunset with X-Men member Rogue in a bikini feeding him grapes. As he takes in the view, he slowly leans in to make a move on her. This turns out to be Cable holding a gun to Deadpool’s face while threatening to leave his dead body in another time. Surrounded by flames and lava, Deadpool is kicked down and forced inches away from the lava before he tells Cable what really happened. 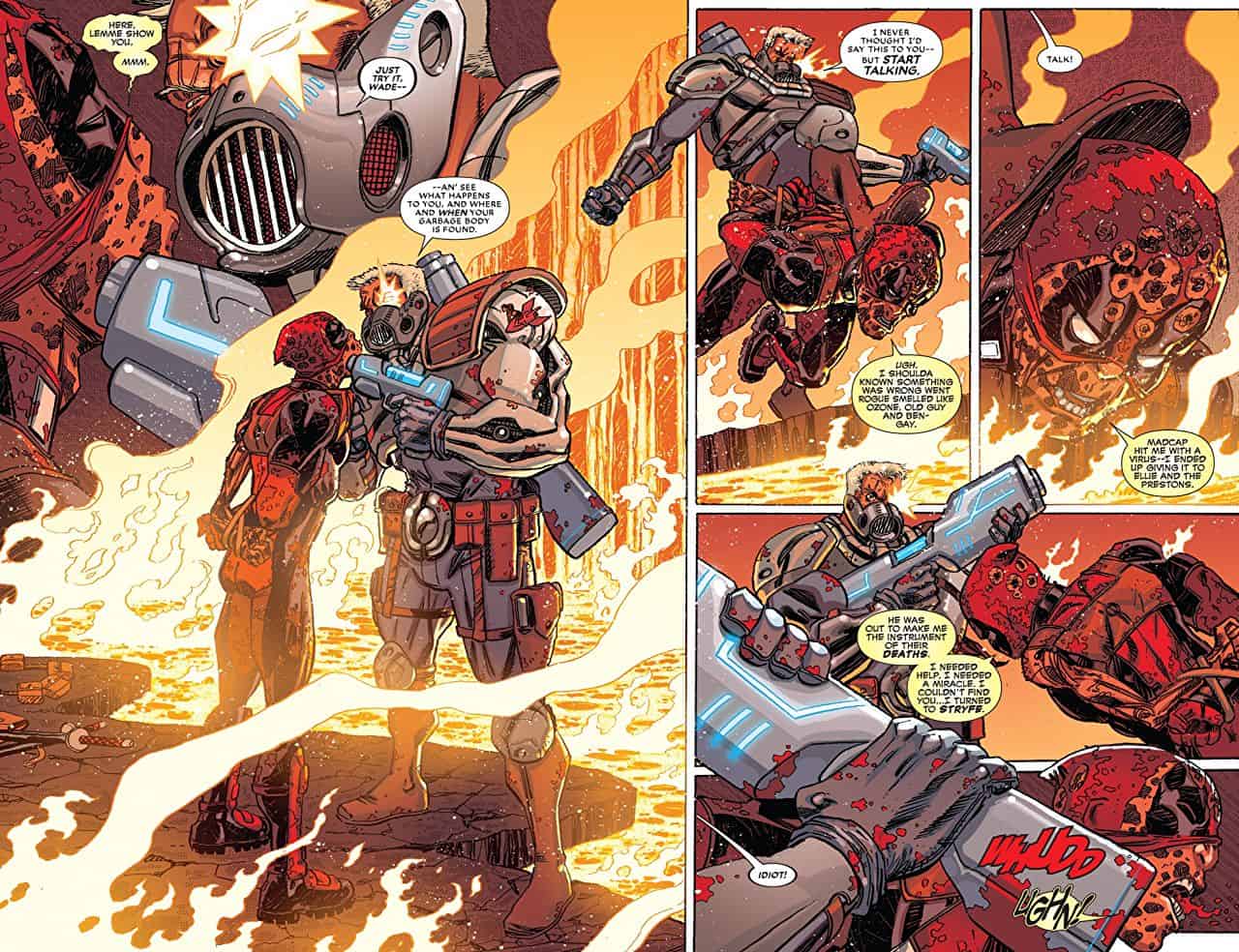 Standing on top of a volcano, Cable and Deadpool discuss what Stryfe really wants and how they can stop him. Deadpool explains that he is supposed to leave a message after he has cut Cable’s heart out, but Cable has other plans. He and Deadpool decide to take the fight to Stryfe this time and stop him themselves. Travelling back to last Christmas where Deadpool met Stryfe to obtain the cure for the bioweapon that was used on his loved ones, the duo arrives just in time to “punch ten shades of &$#%” out of Stryfe. 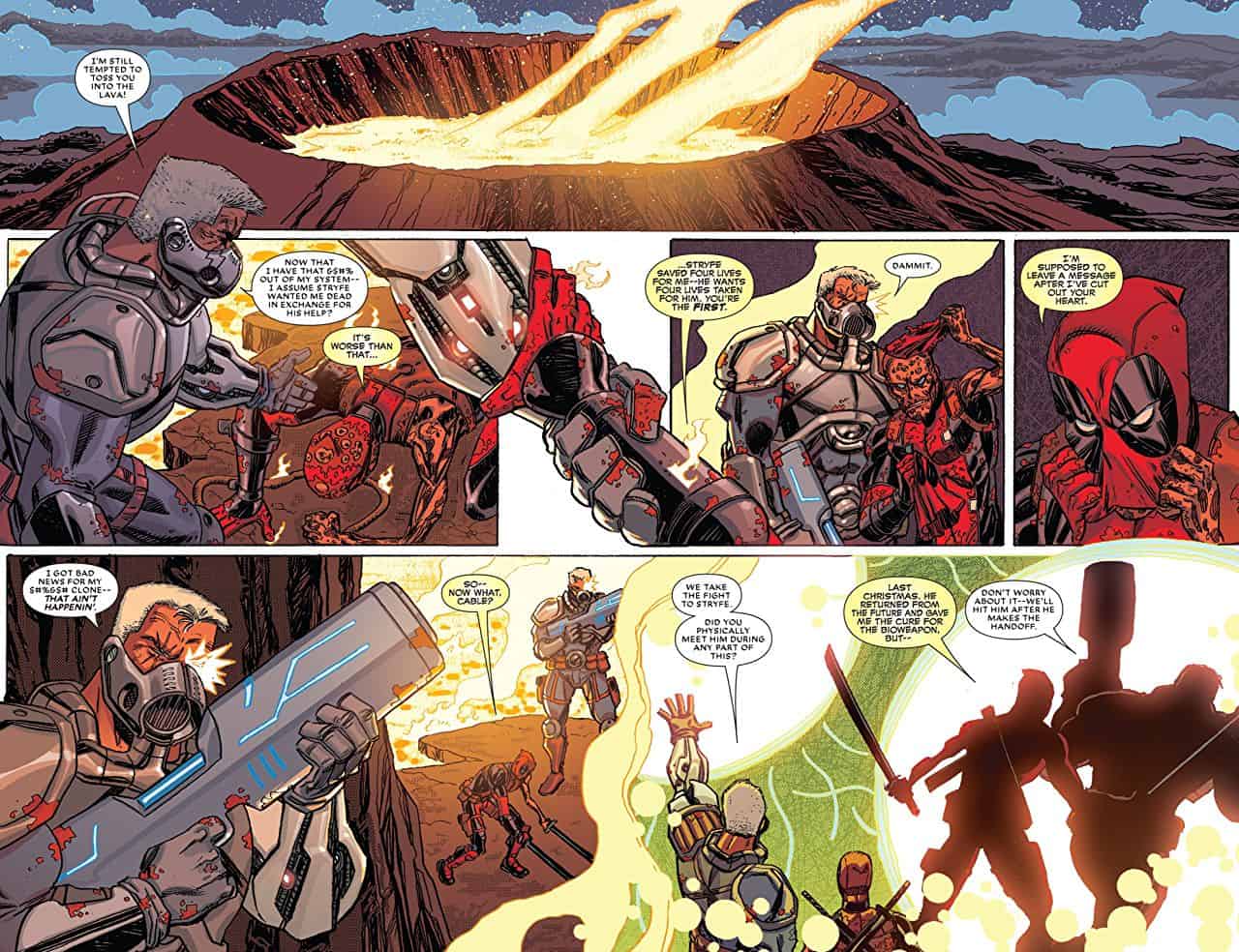 This eventually leads to a standoff between Cable, Stryfe, and Deadpool where each of them has a gun pointed at the person on either side of them. Quickly becoming bored with the situation, Deadpool fires the first round and begins a vicious battle with Stryfe. As Cable powers up a tachyon bubble to stop the fighting, Stryfe and Deadpool trade blows until it is revealed that Stryfe planned for this betrayal. Cable and Deadpool’s entire plan had led them into a trap. In the middle of New York City, a time portal opens up and a herd of various dinosaurs violently charges through. A raptor from the herd immediately goes for Deadpool, and failing to heed to his “down boy” command, slices his stomach open with its large talons. Meanwhile, Cable begins synthesizing a neurotoxin that can be released to neutralize the invading dinosaurs. As Deadpool charges into battle on top of a raptor, only to get eaten by a tyrannosaurus rex, Cable confronts Stryfe with his neurotoxin.

Without hesitation, Stryfe unleashes another time portal while explaining that he had also predicted Cable’s actions. Then dozens of starving vampires trapped from the war started by Blade in 2022 rush through the portal with their fangs out. While Deadpool fights off the tyrannosaurus rex, the vampires begin feeding on other dinosaurs, turning them into bloodthirsty vampire-dinosaurs raging through the city. Within moments, a raptor latches onto Deadpool and the vampirism overtakes his healing factor, turning him as well.

In Washington, the Pentagon quickly arrives at the decision that there is no time to wait for the Avengers to show up, and the only option is to green light the East Coast Air Wing to drop a nuclear bomb on the city in order to cleanse the area. This devastates the city, creating a wasteland beneath a mushroom cloud occupied by time traveling vampire-dinosaurs that are now radioactive. Cable sees everything falling apart and opens a portal to himself thirty minutes prior.

In this new timeline, just as Cable states that they are going to take the fight to Stryfe once again, a portal opens behind him. From inside comes a voice repeatedly yelling “Don’t do it—It’s a trap!”, then Cable appears briefly, surrounded by fire and death. Before he can finish his last warning, he is killed by the bomb and they are forced to seal the portal. With this new information, Cable and Deadpool agree that going to face Stryfe may be a bad idea, but Cable has another one. He calls to open a portal and says that if Stryfe wants his heart, he just has to deliver it.

Deadpool and Cable take on an evil clone and his horde of time traveling radioactive vampire-dinosaurs in The Despicable Deadpool #789, which finds a great balance between humor and gore. However, the plotline features a heavy focus on both Cable and his evil clone Stryfe. This, unfortunately, reduces Deadpool’s presence in the story allowing for a few missed opportunities. Aside from this, it remains an incredibly fun read with classic Deadpool quips and outrageous moments. 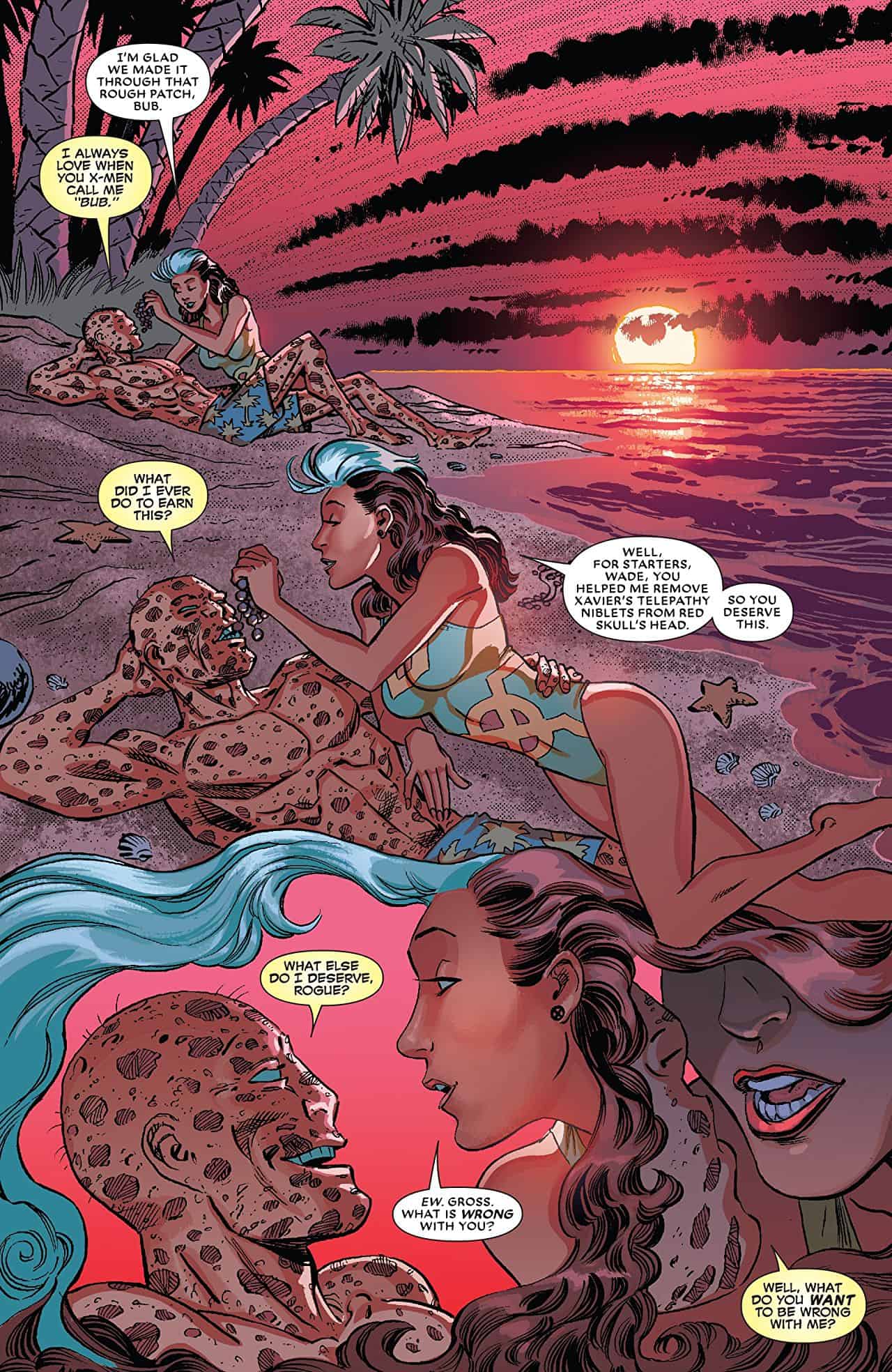 The Merc with a Mouth has experienced a return to form with Marvel’s Legacy initiative, like many other characters, and it is more apparent now than ever. With Cable at his side and a haphazard plan, the duo brings destruction to New York City in a way that you can only find in a Deadpool book. Utilizing hilarious lines and beautiful action sequences, writer Gerry Duggan and artist Scott Koblish continue to deliver with every new release.

Moments in this series such as when Deadpool first attached Cable’s time travelling arm in issue #287, Cable shooting Deadpool in the face in issue #288, and now the epic two-page spread featuring the standoff between Cable, Stryfe, and Deadpool in issue #289 are a testament to the quality of content being produced by the creative team.

Part three of the Deadpool Kills Cable storyline isn’t perfect, but it is a delightfully bizarre comic that you won’t be forgetting anytime soon!

Final Thoughts: The Despicable Deadpool #289 continues to prove to be one of Marvel Legacy’s best ongoing titles. With an outrageous story and beautiful art that showcases Deadpool in a conflict unlike any seen before, the creative team manages to deliver a blend of humor, gore, and spectacle that is sure to entertain any fan of the regeneratin’ degenerate.