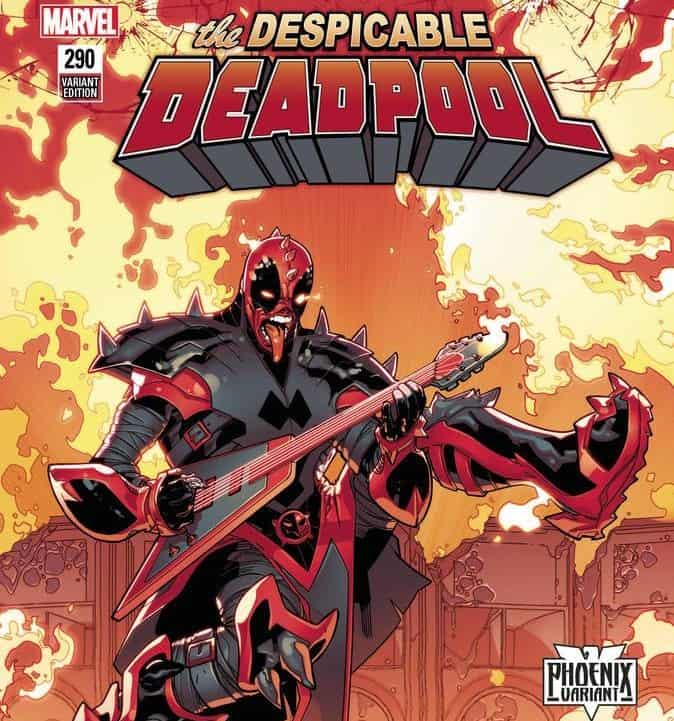 After experiencing first hand the consequences of facing the evil clone Stryfe head-on, Deadpool and Cable travel millions of years into the future to cut the heart out of Cable himself!

Although Deadpool had Cable’s name on his new hit list because the evil clone who saved four lives for him demanded it, the two were able to come to a mutual agreement after multiple failed assassination attempts. Deciding that he must be stopped, Deadpool and Cable bring the fight to Stryfe in the middle of New York City. Unknowingly, they walk right into Stryfe’s trap and unleash a horde of radioactive vampire-dinosaurs into the city. Seeing no other option the Pentagon hastily decides to drop a nuclear bomb on the city to cleanse the area. As Cable witnesses the consequences of their actions, he opens a portal calling to himself thirty minutes before these events. Even while facing imminent death he manages to warn the new timeline’s Deadpool and Cable that it was all a trap before the portal closes. With this new information, Deadpool and Cable decide taking the fight to Stryfe might not be the best option, so Cable decides if Stryfe wants his heart, he will just have to give it to him.

Leading Cable down into the subways of New York City, Deadpool explains that he has the perfect safe house to make an important call from. This turns out to just be an abandoned subway station decorated in classic Deadpool fashion. It even features a few hidden dead Transit Workers. Cable immediately makes a call to a future version of himself, but Deadpool simply can’t contain himself over his excitement of learning about “Old-Man Cable”. The Cable from the distant future picks up the phone knowing that Wade Wilson will be on the other end, and demands to speak to Cable. The two agree that the situation with Stryfe needs to be settled, and decide to meet in 67 years. 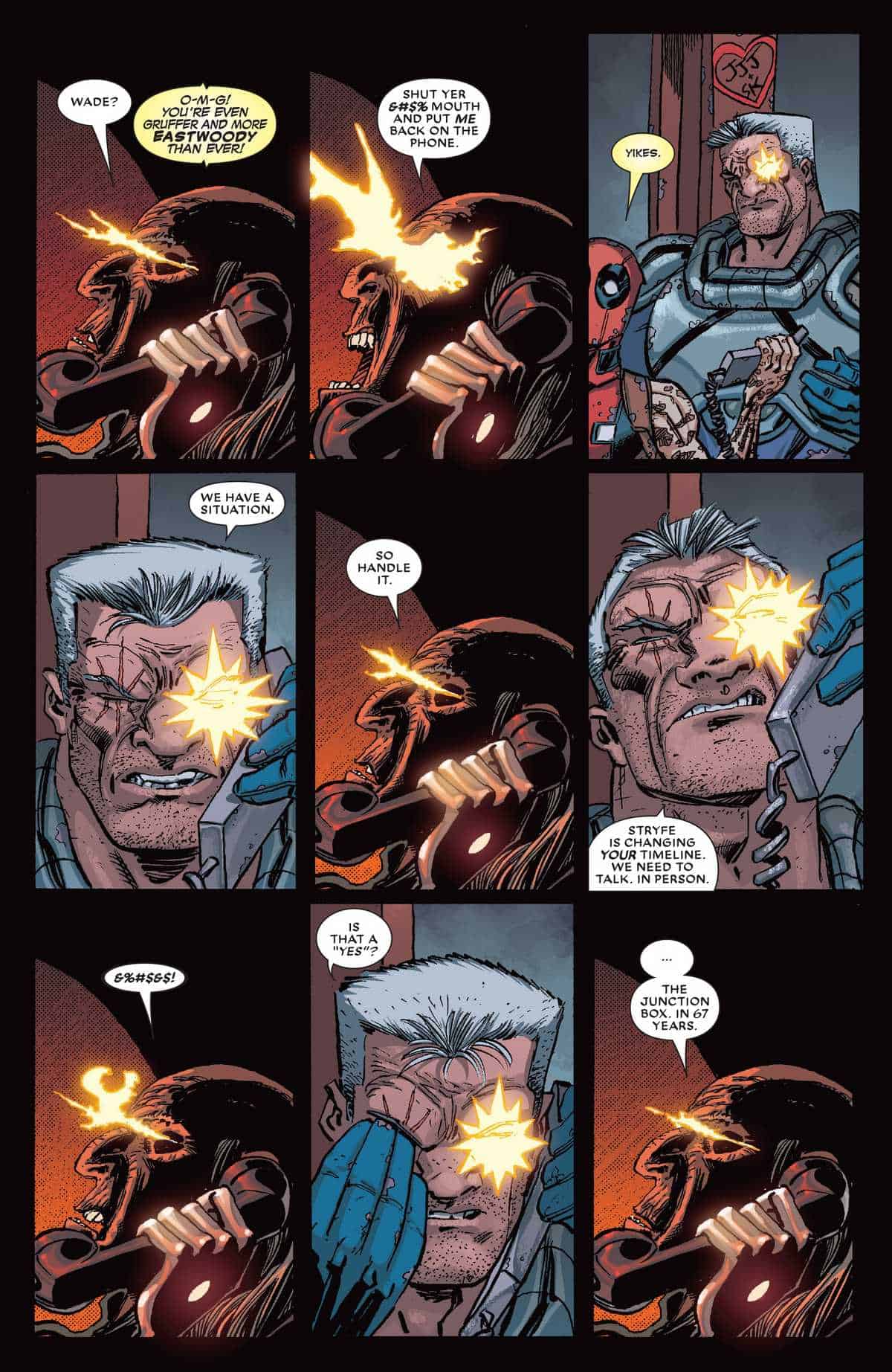 Standing in the middle of the subway with a train quickly approaching, Cable calls a blindingly bright portal into existence. Just before the train collides they are thrust into the future to the year 2084. A post-apocalyptic timeline where global warming became weaponized and destroyed most of humanity. While Deadpool questions if literally, everyone had died because of this, the two are ambushed by a vicious vampire.

Unfortunately, Deadpool’s gang signs appear to have no effect on the vampires. He begins to mention that they are lucky their true weakness is light when another vampire lurches at him. Terrified, Deadpool fights the incoming vampires off alongside Cable, who explains that over the years they have actually developed a slight tolerance to light. Now they serve as a security feature. After tossing a grenade in the mouth of the final vampire who was in the process of gloating over their rise to power, the duo proceeds to the old Penn Station. A safe place Cable describes as somewhere individuals can come to worry about their next moves without being ambushed.

After being scanned by dozens of lasers in a “Stryfe-check”, Cable warns Deadpool not to speak with the others. Then he opens a large door on the other side of the room. Inside is a vast chamber filled with various versions of Cable from bizarre timelines. While making their way through the facility, Deadpool asks why they can’t just “whack one of the other Cables” and take their heart, but Cable explains they are here to mend timelines, not destroy them. He tells Deadpool the heart has to be his. Though he thinks to himself that Deadpool isn’t too far off from his own plan…

Before long they arrive at what appears to be a time traveling bullet train that will take them to a place where Cable chooses to eventually retire. A place that is quiet. One where he wouldn’t have to worry about killing someone or being killed. An amazed Deadpool straps himself in beside Cable, and the bullet train races off, sending them millions of years into the future. Arriving in a disappointing “storage locker’, Cable warns Deadpool that whatever happens, he needs to allow him to do the talking. The two then climb a nearby ladder leading out of the room, but Deadpool only admires the view of watching Cable from behind…Soon they arrive on top of a Viking ship floating through the magnificent expanse of a dying universe. 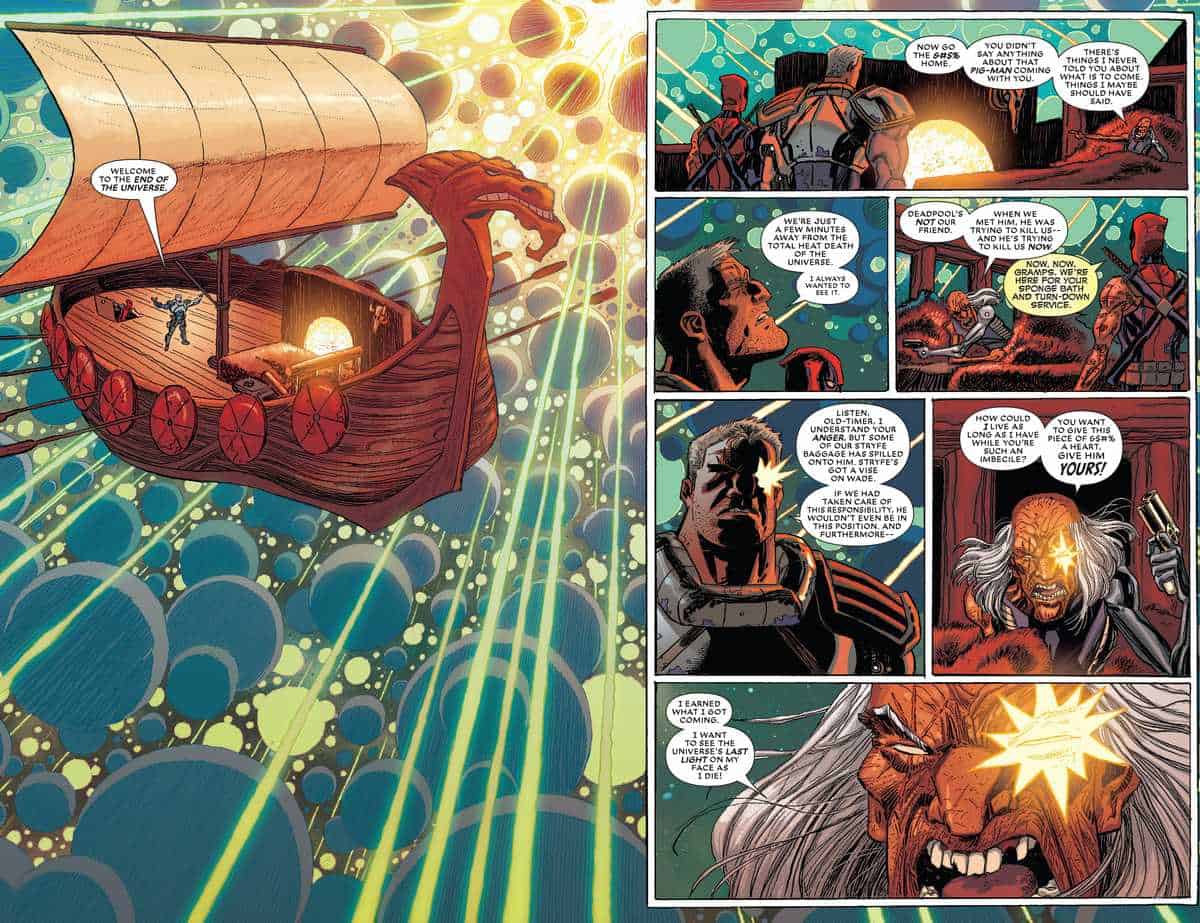 This is where “Old-Man Cable” rests, but he is more than angry to see Deadpool arrive alongside Cable just moments before the destruction of the universe. The frail old version of Cable lies in his bed and threatens them both, screaming for them to “go the &#$! home”. While furiously demanding that he has earned the right to see the universe’s last light on his face as he finally dies, Deadpool shoots him in the face.

With his knife already in hand, Deadpool prepares to cut the heart from his chest. Cable refuses to help and can’t believe that after everything, Deadpool is the one to actually kill him. As the thought crosses his head that he deserves better, Deadpool arrives with the heart in his hand, asking for spare baggies because he ran out.

Abandoning the time-traveling ship just moments before it enters the Sun, Deadpool offers to give StryfeCable’s regards when delivering his heart, but Cable is one step ahead. He knows that if Stryfe wants his heart then he’s getting back into the cloning business.

The Despicable Deadpool #290 finds Deadpool and Cable on a journey millions of years into the future attempting to retrieve the heart of “Old-Man Cable”. A version of Cable who has lived until moments before the destruction of the entire universe. This journey leads to Deadpool abruptly murdering him and cutting his heart out, which was both shocking and morbidly delightful. Not to mention a clever twist on the cliché “death of a superhero” story we’ve seen countless times.

Although the Deadpool Kills Cable arc has seemed to be more focused on Cable than Deadpool, writer Gerry Duggan manages to find a near perfect blend of the two characters’ narratives, creating another instant classic issue. Filled with hilarious banter between Cable and Deadpool, more outrageous twists, and even a space Viking ship, the creative team continues to deliver a reading experience that you won’t find anywhere else.

World-building on such a grand scale, while accounting for time-traveling, is a complex task that is accomplished exceptionally well by the creative team in The Despicable Deadpool #290. With pacing that drives the story forward in both a mysterious and intriguing way, alongside an artistic vision that defines its uniqueness and quality, this series continues to prove to be one of the best ongoing titles available. 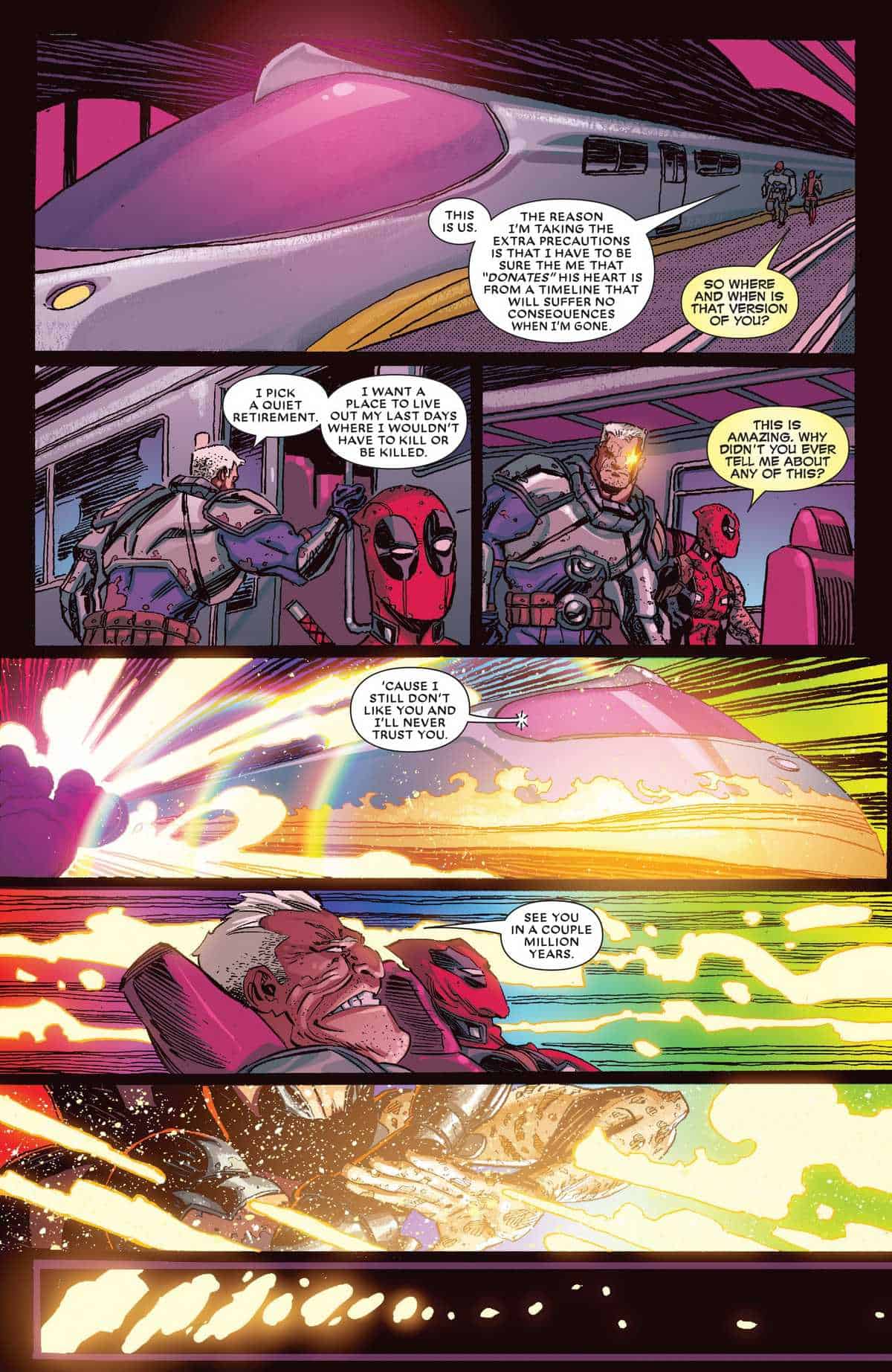 Some of the most memorable moments in this series have been incredibly gruesome at times, and hilarious at others, but this issue finally manages to capture a Deadpool moment that truly encompasses all of the reasons we have come to love the Merc with a Mouth. Like the cover states, this issue: Cable dies!

Final Thoughts: The Despicable Deadpool #290 writer Gerry Duggan balances the chemistry between Cable and Deadpool perfectly, allowing for hilarious banter and unpredictable circumstances to make it one of the most memorable issues in an undeniably outstanding series. 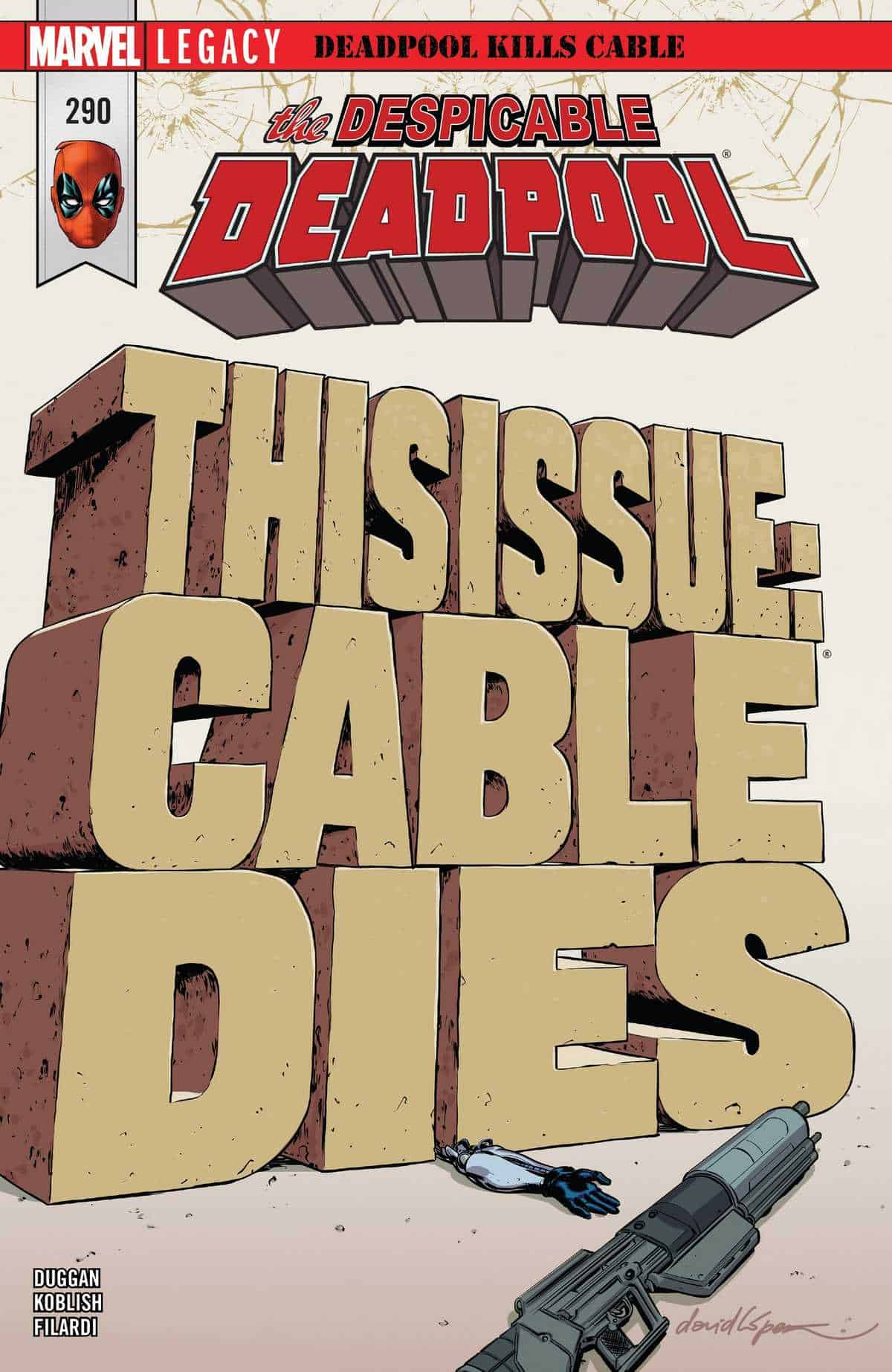