Safety in the Wastelands (The Realm #4 Comic Book Review)

After discovering magic unlike anything they’ve ever seen before, Will escorts Molly and her company to a place of safety, only to end up confronting their most dangerous threat yet!

Will’s latest assignment has him escorting a party of four all the way to KansasCity. Though some of the group includes fighters like Molly and Lazlo, there are also a couple of individuals considered liabilities. A few days into their journey, an encounter with a group of goblins forced them underground where they were luckily saved by a kid named Eli.

Meanwhile, Eldritch continues to use his power bestowed upon him by their Lord to prove his worthiness to the Council which has already grown impatient with him. Mounted on top of a giant dragon, he arrives at a skirmish and lays waste to the area causing the human resistance to retreat. His comrades disagree though, including Redjaw, the leader of the Crow Feeders who is known as the most feared war-band in the Lords army. Behind Eldritch’s back, Redjaw and his lover expose their treacherous intentions to overthrow the spell-caster…

As Will and the party continue following Eli to an area of safety, a mysterious wild man continues his rampage. Killing every orc and goblin sight, he is seemingly on a never-ending quest to kill every last one of them.

While still deciding if they can or should trust Eli, both Will and Molly scout the nearby area for potential threats and supplies when they suddenly hear what sounds like someone kicking a ball. Following the sounds, the two eventually come upon the boy all by himself, playing with a soccer ball. As they question where his family is and why he is out here alone, a giant spear is hurled into the boy, impaling him right in front of Will and Molly.

As the boy falls lifelessly to the ground holding the spear penetrating his chest, Will and Moly turn to see an invading group of undead charging at them. The two are able to make quick work of the small group, but as they finish them off, a burst of blindingly bright light explodes from the boy’s chest and surrounds them. Then, as if nothing happened, the boy stands up and tells Will and Molly not to worry. He’s done this before. 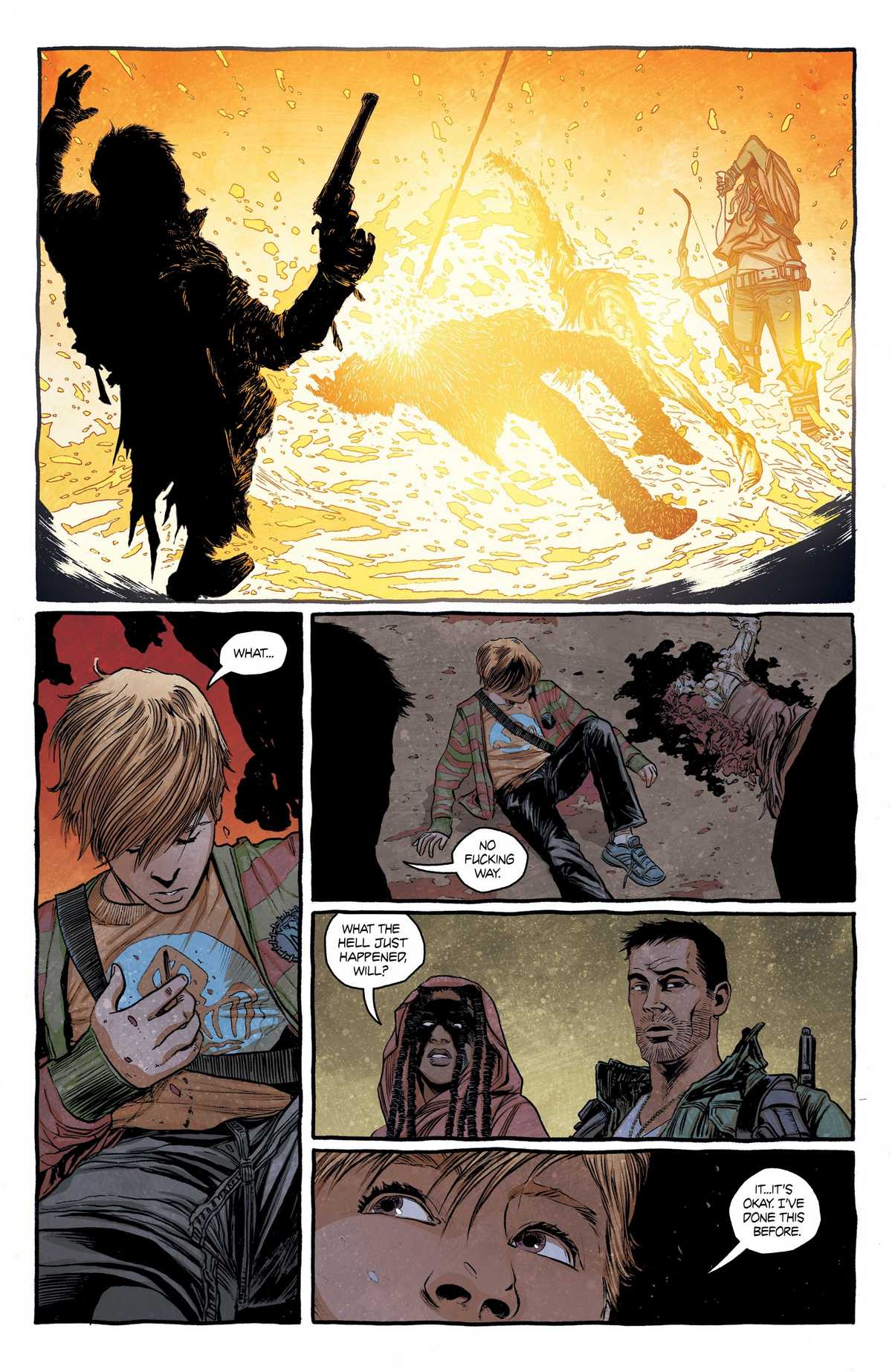 Eldritch returns after his battle and informs the Lord himself of his deeds, though he wishes for the power to undo all of the Lord’s enemies. Despite wanting only to do his Lord’s bidding, Eldritch is warned that his appetite for power will be his destruction. The Lord grants him a vision and tells him to open his eyes and prepare for what lies ahead. Then a flood of events fills Eldritch’s mind including moments of terror, death, and ecstasy, all surrounding a severed arm that resembles the one from Will’s nightmare.

Meanwhile, two goblin scavengers rummage through piles of garbage attempting to find items of value.  Though the big one Droz, finds only garbage and thinks only of hunger, the other is able to make use of various items. However, within moments he sees seven shrouded figures in the distance and remembers what is important. Smash, kill, eat. Repeat.

As Will and the group attempt to understand the events that led to the resurrection of the boy, and whether or not he can be trusted, Redjaw and his war-band march through the wilderness in a pursuit after unknown enemies. His lover states that if they push harder in their travels they can arrive “under the cover of darkness, and take them by surprise”. However, a messenger appears with news of his missing brothers and Redjaw is distracted. Only referencing an individual by “him”, both Redjaw and his lover believe the missing party could be caused by their target. Redjaw warns everyone that if it is him, no one is to spring another one of his traps. He wants to face him together.

Despite Rook and the resurrected boy named Zach feeling a cold shadow looming over them as they continue, the party prepares to enter what Will has deemed a safe zone where they can rest and resupply. As they do so, however, both Eli and Zach see a dog in the distance when no one else does, but before they can react it disappears. The safe zone, run by a man named Everett, appears to be well functioning and even treats the party to a meal at a dinner table where their plans are further discussed. 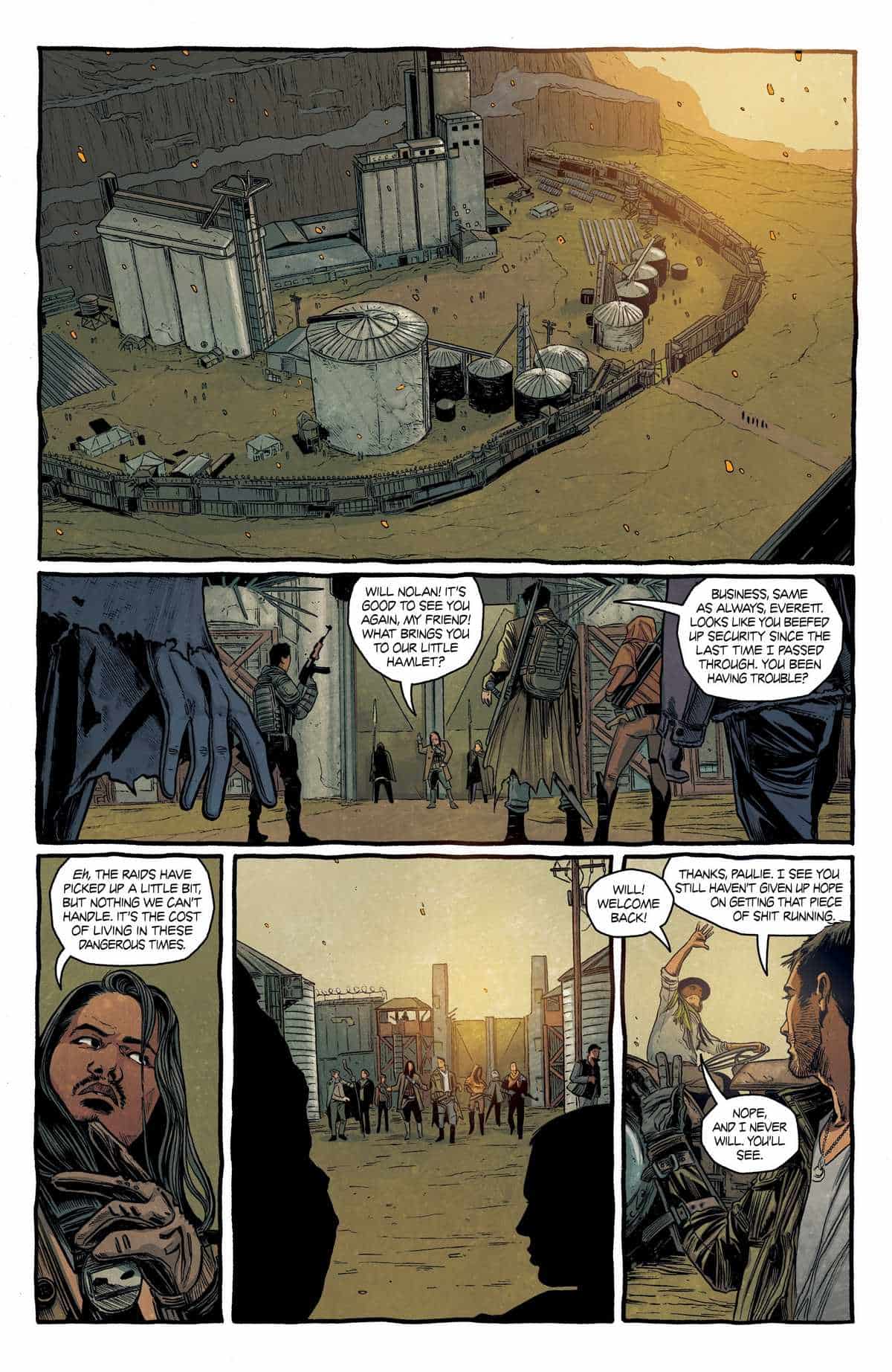 As they eat their meal, Will’s arm starts to cause a pain that shoots through his body and Zach grabs his head in excruciating pain when a guard enters warning Everett that their scouts had sighted an orc war-band headed in their direction. Without hesitation, the party comes to arms, ready to defend the encampment. Even Will, who has shrugged off his pain. Zach, however, can hardly stand and Eli is forced to help him away from the upcoming battle to recover. Through just their silhouettes, we can see Redjaw and his lover have arrived with their war-band. As the community’s defenses rally, Everett reminds everyone of their duties and to fight without fear. Just as the archers ready their bows at Will’s command, an enormous tentacled monster falls from the sky above them with its mouth wide open revealing rows of large razor-sharp teeth.

Through widespread death and even a resurrection, Will and his party have finally arrived at what they believe to be a safe place, only to be forced into one of the largest battles yet! As writer Seth M. Peck continues his outlandish story that skillfully blends together various elements such as orcs and magic set in the post-apocalyptic United States, the latest issue finds a satisfying pace that will keep you engaged until the very last page.

After the shocking cliffhanger of last issue, we were only given the cover of issue #4 that showed Zach stitching his own chest together from the spear that impaled him. This tease left readers questioning what was going to happen next, and luckily this issue picks up right where the last one stopped. With a surprising introduction of an unknown magical ability, the group recruits yet another member of their party and are quickly on their way. However, Eldritch and Redjaw are actively serving their Lord’s wishes and seem to hinder Will at every turn. 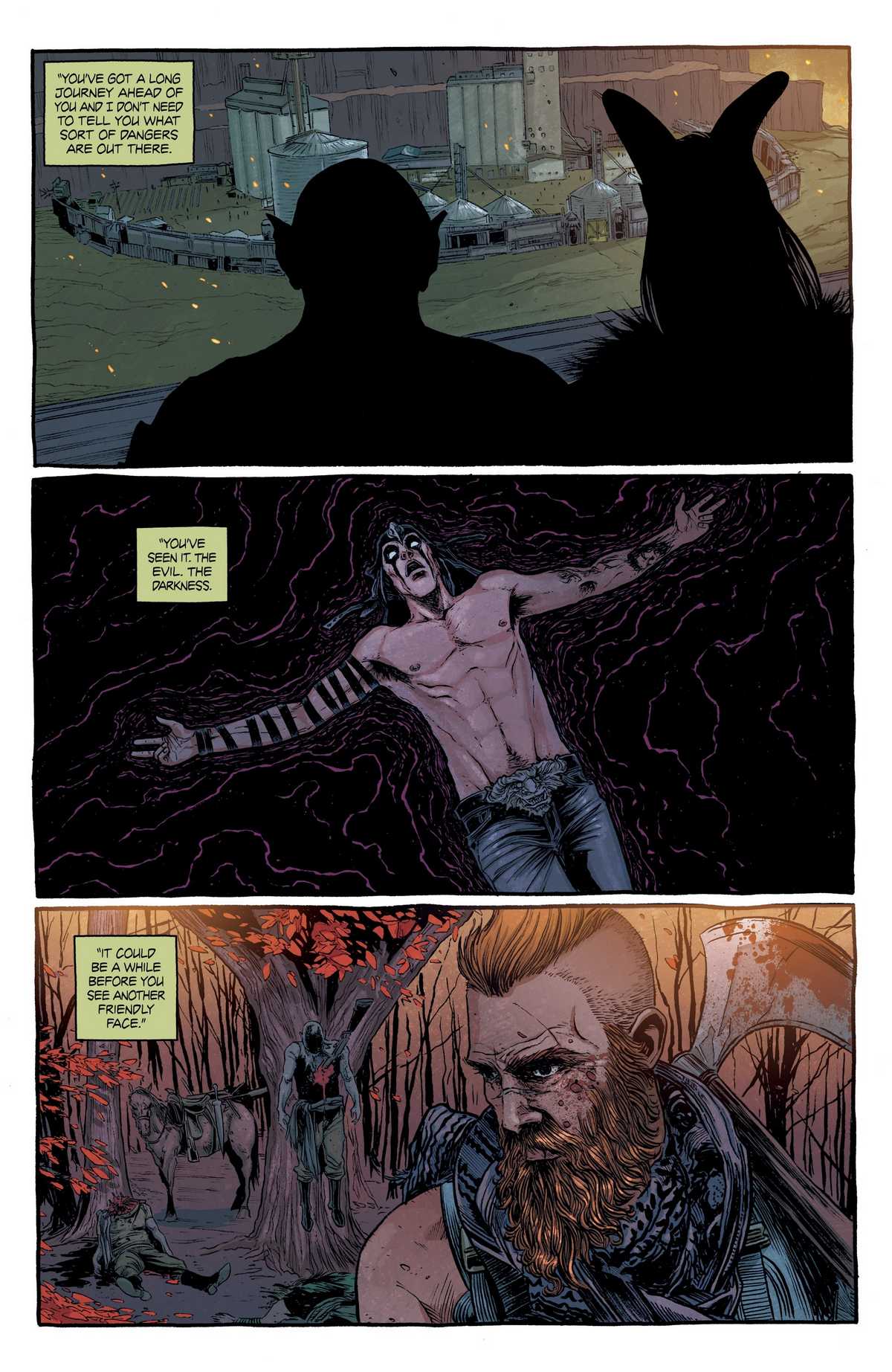 As we finally begin to see multiple plotlines converge in the latest issue, we are still left with unresolved narratives such as the maniacal man killing every orc and goblin he comes across, and what Eldritch’s next move is for his Lord. This is sure to make the next few issues interesting, despite the immediate threat presented to the group at the end of this one. The storytelling continues to impress with relatable characters and shocking twists at a point where most fall into mundane narratives that are predictable.

Aside from the incredible storytelling, the creative team including Jeremy Haun and Nick Filardi deliver top-notch art that you won’t find in any other book. The colors and overall aesthetic used continues to define the world where this story takes place, as well as highlight moments of terror or surprise with striking visualizations that will stay in your head.

Although it appeared to be a set up for what is to come, the latest issue of The Realm continues astounding fantasy world-building through apocalyptic character-driven dynamics and shocking twists that make it well worth reading.

Final Thoughts: With a unique and well-defined world, The Realm #4 continues to deliver an enjoyable reading experience by successfully managing intertwining narratives that are intensified by brilliant artwork. Though mainly serving to provide the groundwork for an imminent confrontation of epic proportions, it provides the necessary development to create emotional distress in readers that will undoubtedly carry over into the next issue! 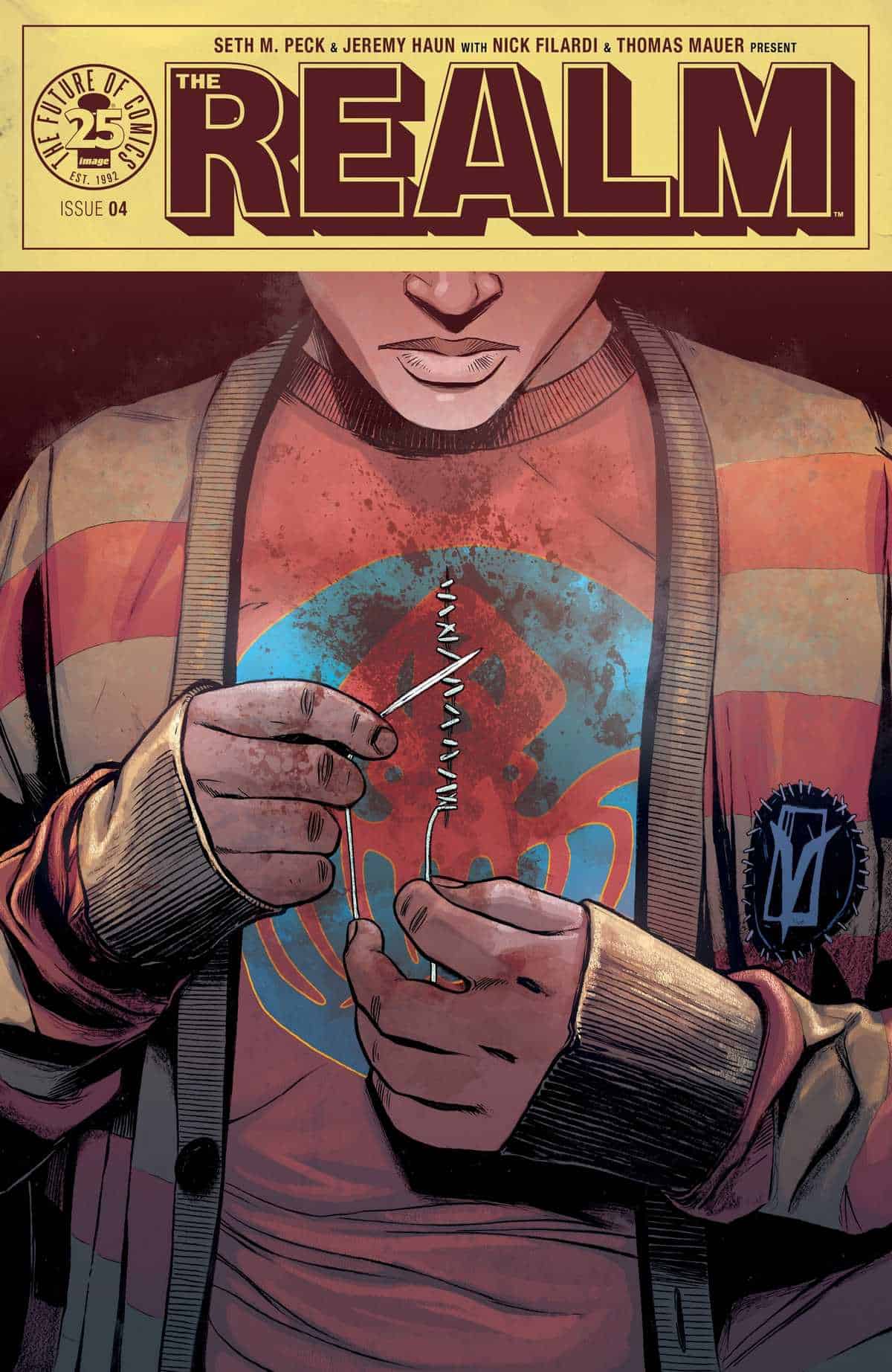 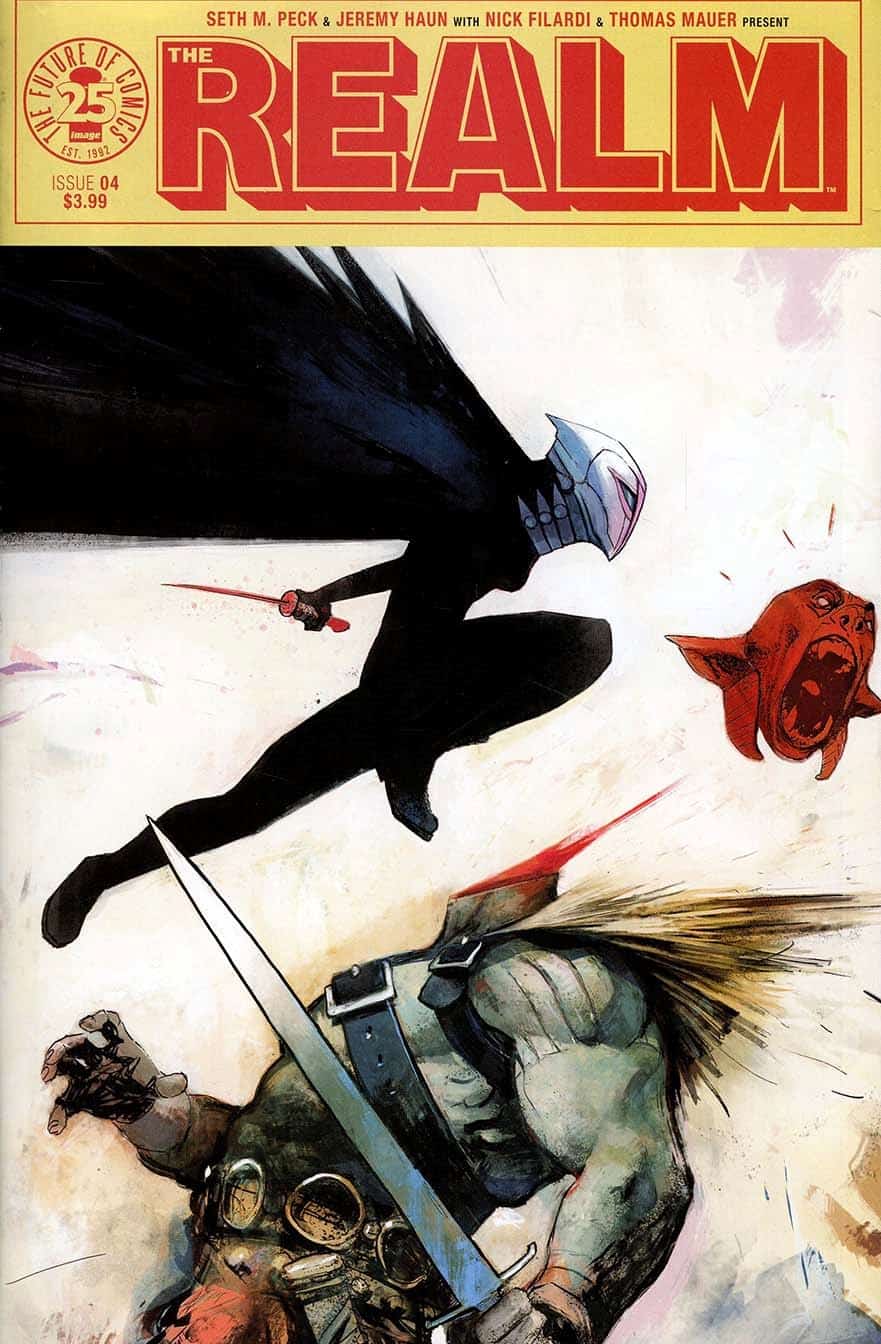