Mister Terrific has been studying the Dark Multiverse ever since Batman found evidence that it existed. Now he must team up with Metamorpho, Plastic Man, and Phantom Girl; Meta-Humans that are all connected in different ways, and together they will uncover the mysteries of the Dark Multiverse. 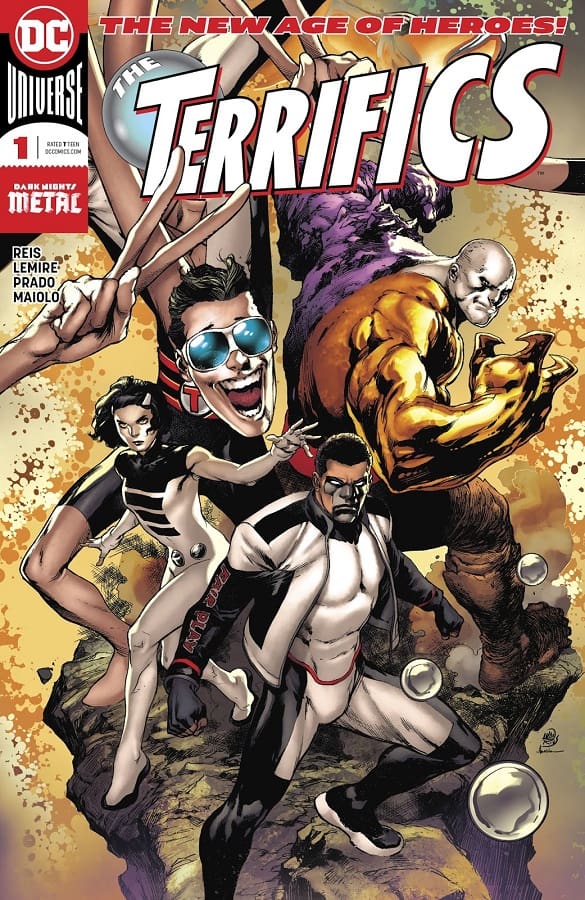 What You Need to Know:
The events leading up to The Terrifics #1 is quite lengthy. It all starts in Dark Days: The Forge when the first signs of the Dark Multiverse were brought to light by Batman and Mr. Terrific. They explained that Plastic Man had been introduced to the energy from the Dark Multiverse that sent him into a manic state filled with fears and thoughts of hate that gave him no choice but to revert to a dormant egg shape.

Small quotes from different sections of Geoff Johns and Gary Franks Doomsday Clock have given evidence about Metamorpho. The world after Metal has begun an arms race, but with Superheroes. Other Countries are claiming that since the arrival of Superman the United States has been doing secret experiments to create other Meta-Humans. From the different context, we can deduce that Rex Mason A.K.A. Metamorpho may have been one of those government science experiments. How Rex got into the hands of Professor Stagg has yet to be seen.
Mr. Terrific was obviously helping Batman with finding access to the Dark Multiverse in the early days of Metal, but what about Phantom Girl? Well, that’s where we start to hit a snag. Phantom Girl has yet to be introduced, and whether she shows up in Metal #6 is your guess as good as mine, so in the meantime, we can only hope she appears in this first issue of The Terrifics.

What You’ll Find Out:
Opening up the issue we see Staggs old neanderthal chum Java eating a live bird as we read inner dialogue from Mr. Terrific before his entrance to Stagg industries. 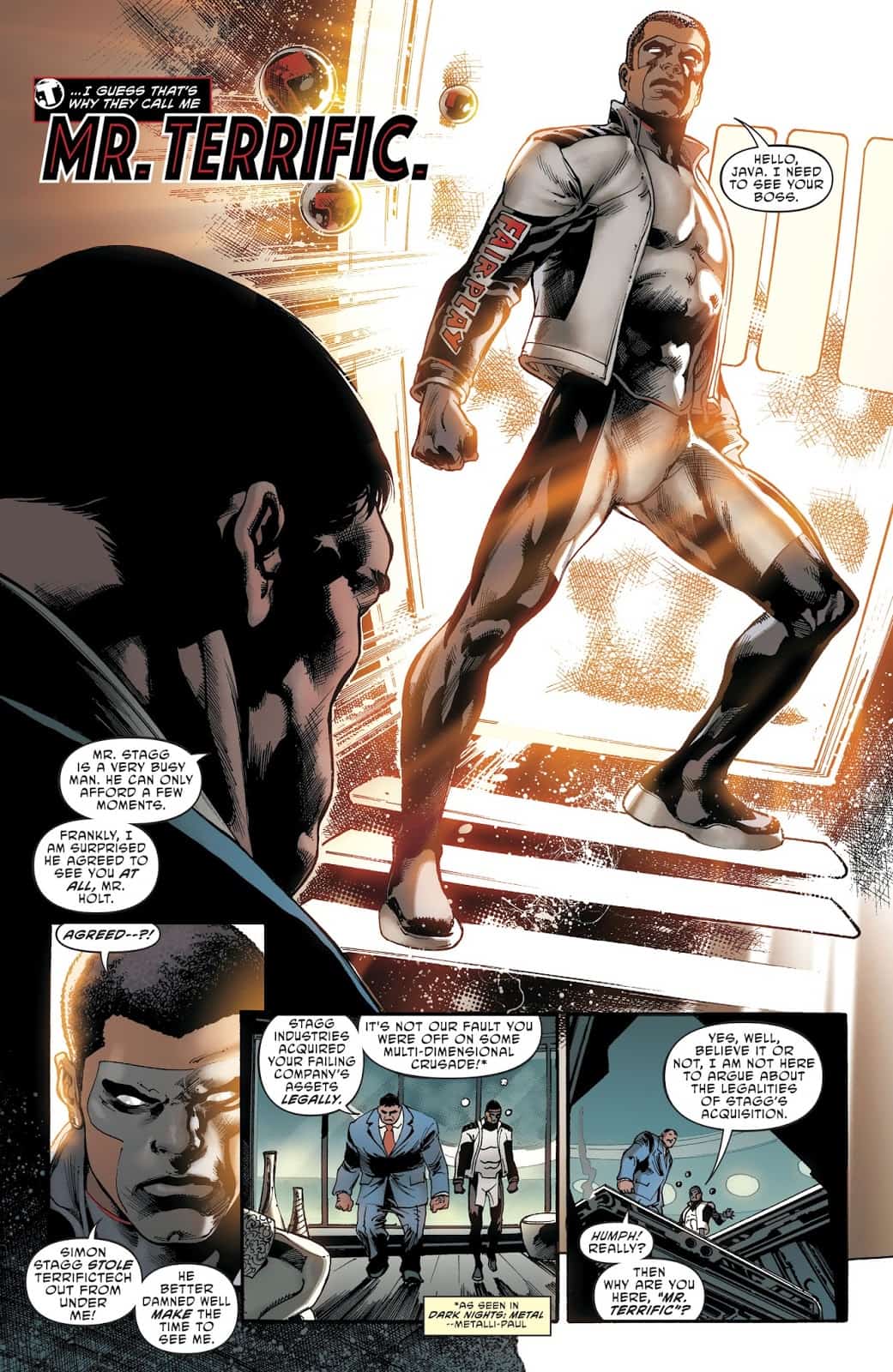 After Holt shows up he and Java share some Dialogue until meeting with Simon and his Daughter Sapphire. It’s evident that they are having trouble with whatever experiment they are working on as Terrific begins to explain that when Stagg bought out his company he started messing with technology that would open a portal to the Dark Multiverse. Stagg, obviously oblivious to the power that the Dark Multiverse contains, has succeeded in opening the portal, and forcibly held in front of the portal is Metamorpho! Sapphire tells Holt that after the portal opened Rex transitioned into this unknown metal.

Seeing as how Holt has spent some time in the Dark Multiverse he immediately identifies Rex’s composition as Nth Metal (See Dark Knight: Metal, which is pretty necessary for this whole story). Before Mr. Terrific can get any answers out of Rex Mason he begins to go crazy and ends up throwing himself, Mr. Terrific and the confined Plastic Man right into the Dark Multiverse. 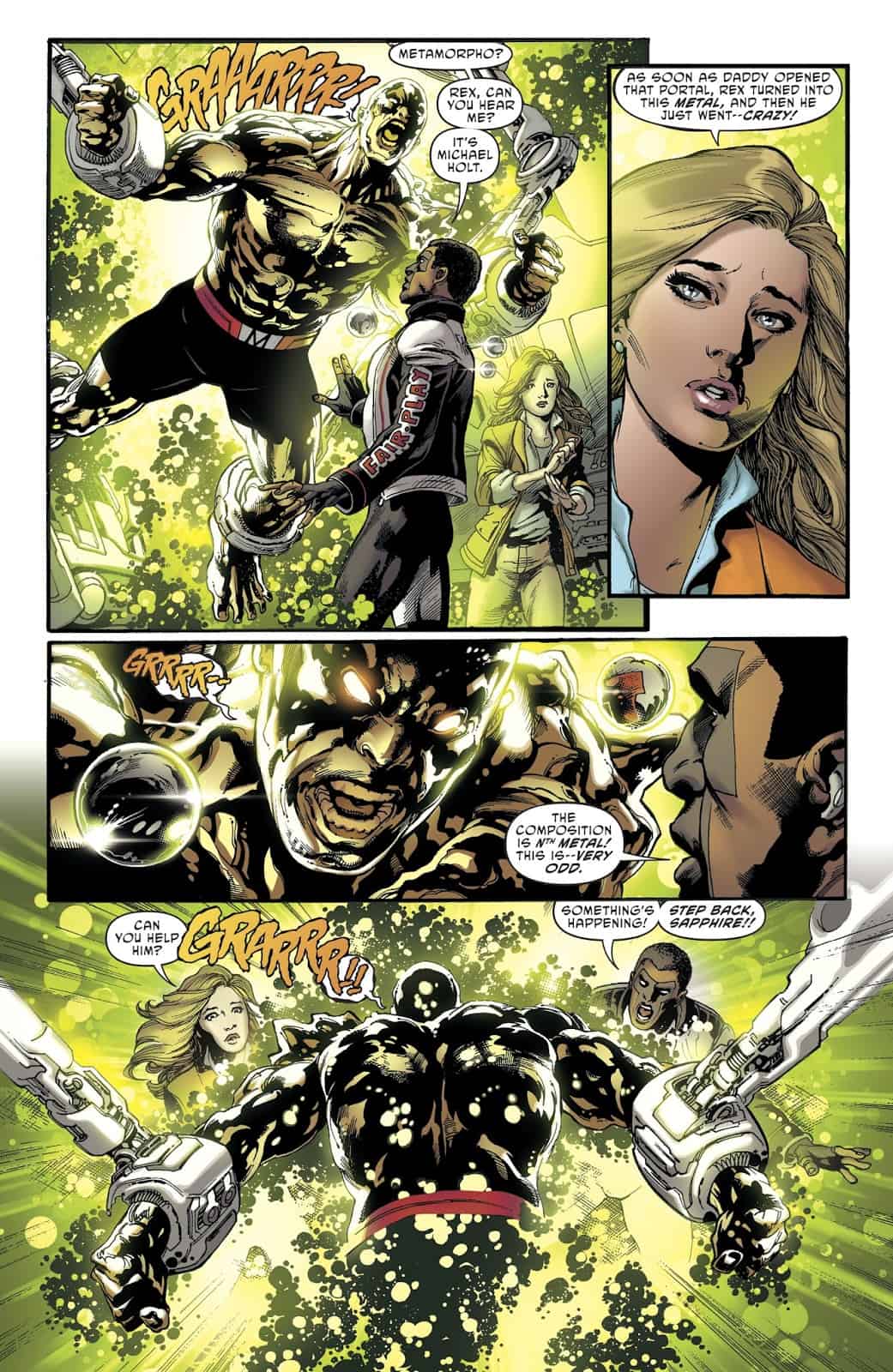 After coming back in contact with the Dark Multiverse, Plastic Man starts to unravel and become sentient again. Immediately, Mr. Terrific has Plastic Man shield (Swallow) him and Rex. 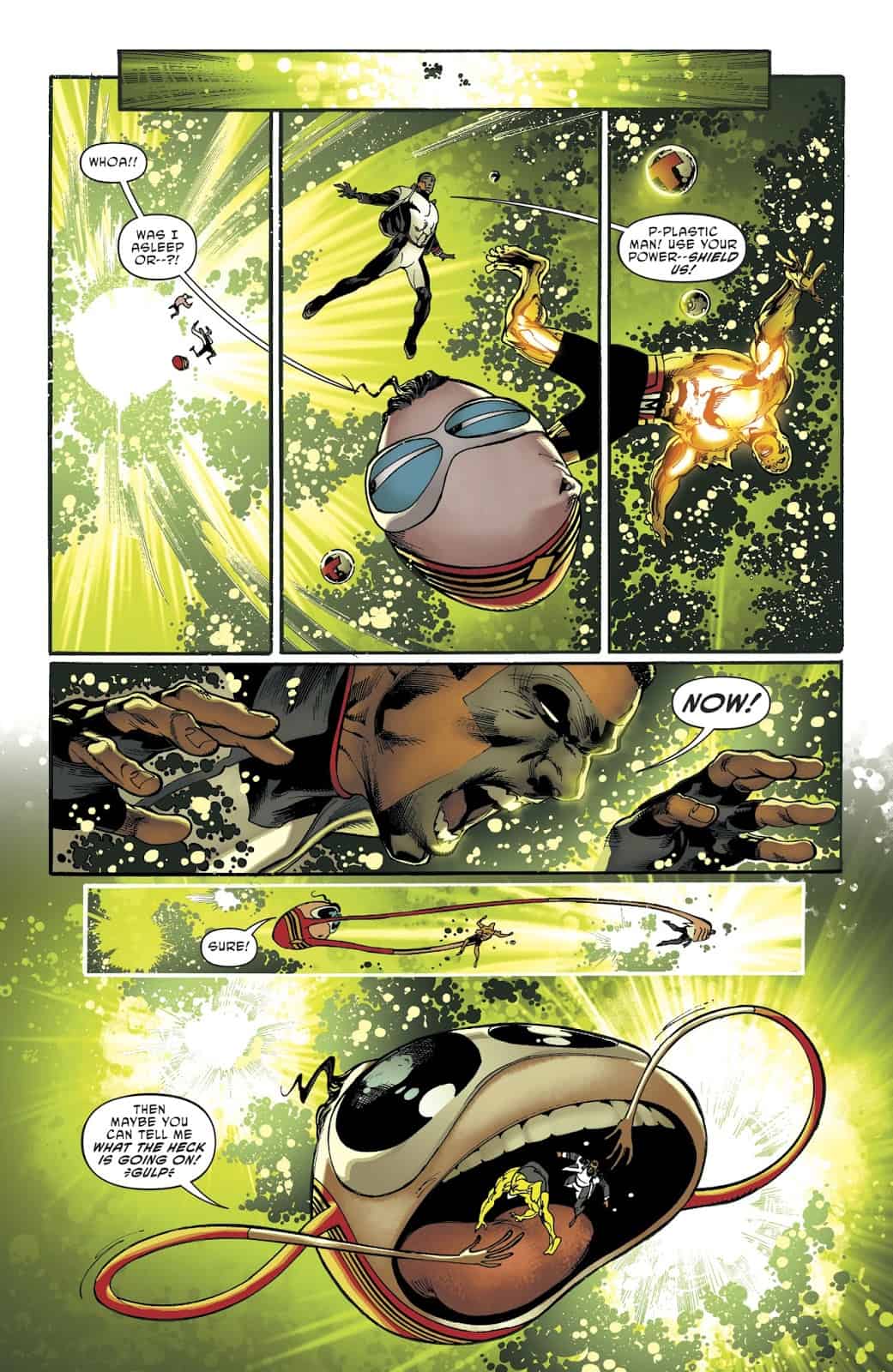 After getting inside Plastic Man (that sounded weird typing it) the three soon-to-be teammates start to break down what has been happening. Rex explains that he turned into the Nth metal after Stagg opened his portal, and Plastic Man goes on to remember the last thing he can, which is helping out Batman in the Batcave. Terrific explains what happened during the events of “Metal” where we finally get some of the first fun dialogue between these characters that I have been waiting for. Plastic Man starts to get humorously mad over the fact he has been an egg for so long. 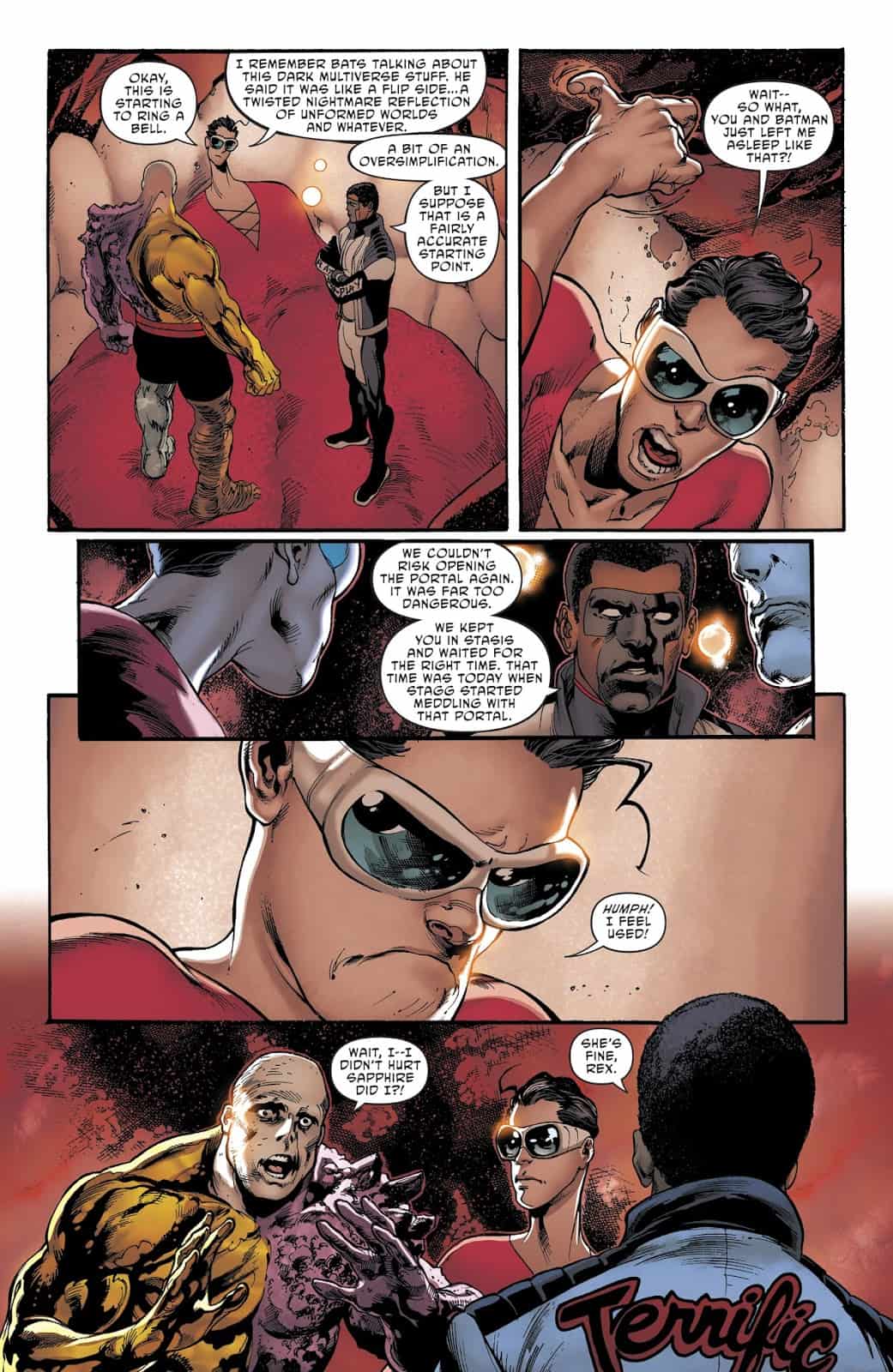 Once the team stops bickering Holt learns some alarming news, there is something in this Multiverse alive with them. So Mr. Terrific and the rest of the gang do what any good superhero group does, they investigate. After a few beautifully crafted panels by the artistic team including Metamorpho and Plastic Man as the highlights, the team begins to get attacked by gross interdimensional spiders until a loud voice tells them to stop. With a flip of the page, we are finally introduced to Linnya Wazzo or Phantom Girl, who only used projections to make them see those spiders. One of her powers is that she can become intangible. She says it’s usually no big deal, but ever since she ended up on this weird landmass she hasn’t been able to go back to a solid form. 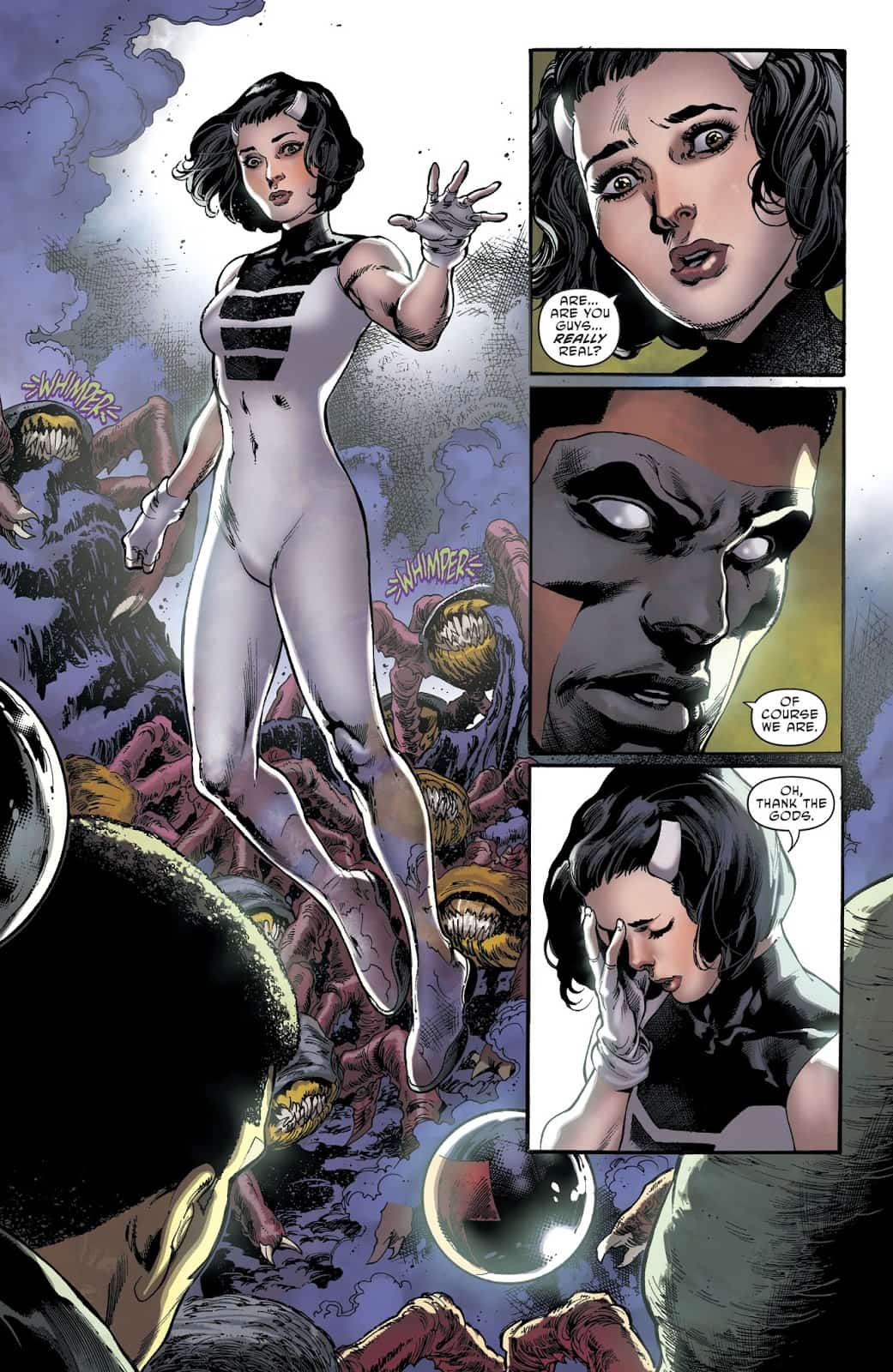 Terrific explains that he was following her tracking beacon when she confusingly tells him it wasn’t hers. After some quick introductions, the now full roster continues to investigate the strange signal that Terrifics T-Spheres have picked up. After a little bit of traveling they come across an obvious beacon tower. After Holt activates it the team gets a message from none other than Tom Strong, an Alan Moore original character that has had a long history of different publishers, letting the team know that he may be dead but that they are the only ones who can save the universe!

What Just Happened?
The Terrifics #1 panned out almost the exact way I expected and gave me so so much more. From Java grabbing a live bird out of the air, to a huge round Plastic Man spitting Mr. Terrific and Metamorpho out of his mouth, this issue was satisfying both in story and in art. Jeff Lemire delivers an eventful and funny story for this first issue that feels like its leading to a really fun story arc. Everything about the characters just worked so well, between the intellectual talk between Rex and Holt and the smart-alecky Plastic Man complaining about his years in solitude, I enjoyed everything that happened when the characters were together. Even Phantom girls introduction was a fun moment and I can’t wait to see this team get to know each other better.

Ivan Reis, Joe Prado, and Marcelo Maiolo work so well together That it’s almost impossible to find anything bad to say in the art section. Ivan and Joe drew Plastic Man in some of the most creative and fun ways that you can tell it’s nothing but fun when dealing with such a stretchy character. Even Metamorpho was detailed but clean and made for a nice ‘old but new’ feel for the character. The color by Marcelo is incredible as well. The blues behind Stagg industries transitioning to the greens of the Dark Multiverse were an easy way to go from a real world to a fantasy one. Plastic Man’s original outfit is beautifully done and makes for an amazing reentry for the character that every DC fan wanted to see back in continuity. Even the last shot of Tom Strong was so perfectly drawn and colored it almost felt as though the original artist had just drawn him from memory back in the 90’s.
The only real drag I felt that weighed this whole issue down is the strong connection to Scott Snyder’s Dark Knight: Metal. This is unlike the same issue I’ve felt with any of the “New Hero” books DC has distributed lately, each tying right into the Metal series or the Dark Multiverse in some way. Sideways, for example, is directly connected to the energy of the Dark Multiverse, but the problem here lies with the number of characters we are dealing with. We have four characters that are all connected to this series. I’m not complaining, but I am saying that if you are here to decide rather you want to read this series or not, and you decide you’re interested: PLEASE READ DARK KNIGHT: METAL FIRST!

Rating: 9.5/10.
Final Thoughts: Jeff Lemire, Ivan Reis and the rest of this incredible creative team have developed four obscure heroes in one issue to the point that they already feel like family. Lemire’s plot-driven storytelling combined with Reis’ contemporary/classic artistic mix brings a fun new age for these classic DC characters that will hopefully see many issues and many good stories ahead. Anyone interested in anything to do with Plastic Man, The Element Man, or even just some more Dark Multiverse after “Metal” ends “The Terrifics” may just be the book for you.