Detective Chimp tries to find the right harmonics to counteract Barbatos while Flash, Cyborg, and Raven seek out the center of the multiverse. 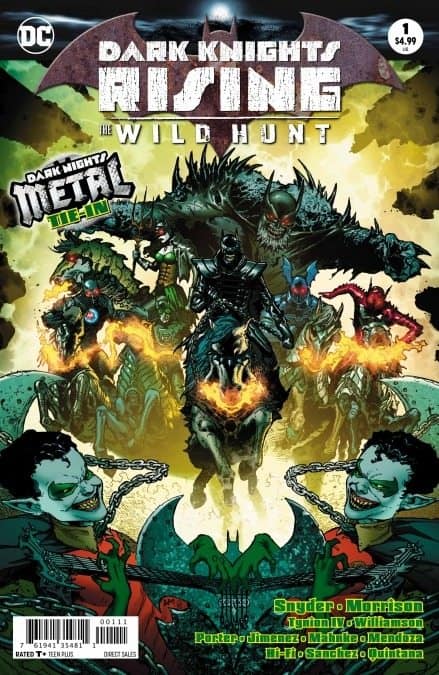 Detective Chimp and a host of other scientists are trying to figure out a particular harmonic frequency that can stop Barbatos.  The Justice League has been scattered, trying to stop Barbatos, but the Dark Knights are after them.

We’re treated to the tragic origins of Detective Chimp before being shown current events in Blackhawk Island, as Detective Chimp and a host of other brilliant minds are working to find a frequency that can stop Barbatos’ invasion.  They are using Red Tornado’s wind harmonics along with the Metal Men (just in case you wondered where they were).  Unfortunately, Chimp’s intelligence seems to be leaving him (for some unknown reason).  Chimp receives a distress call from Flash even as he’s trying to get Flash to find the House of Heroes. 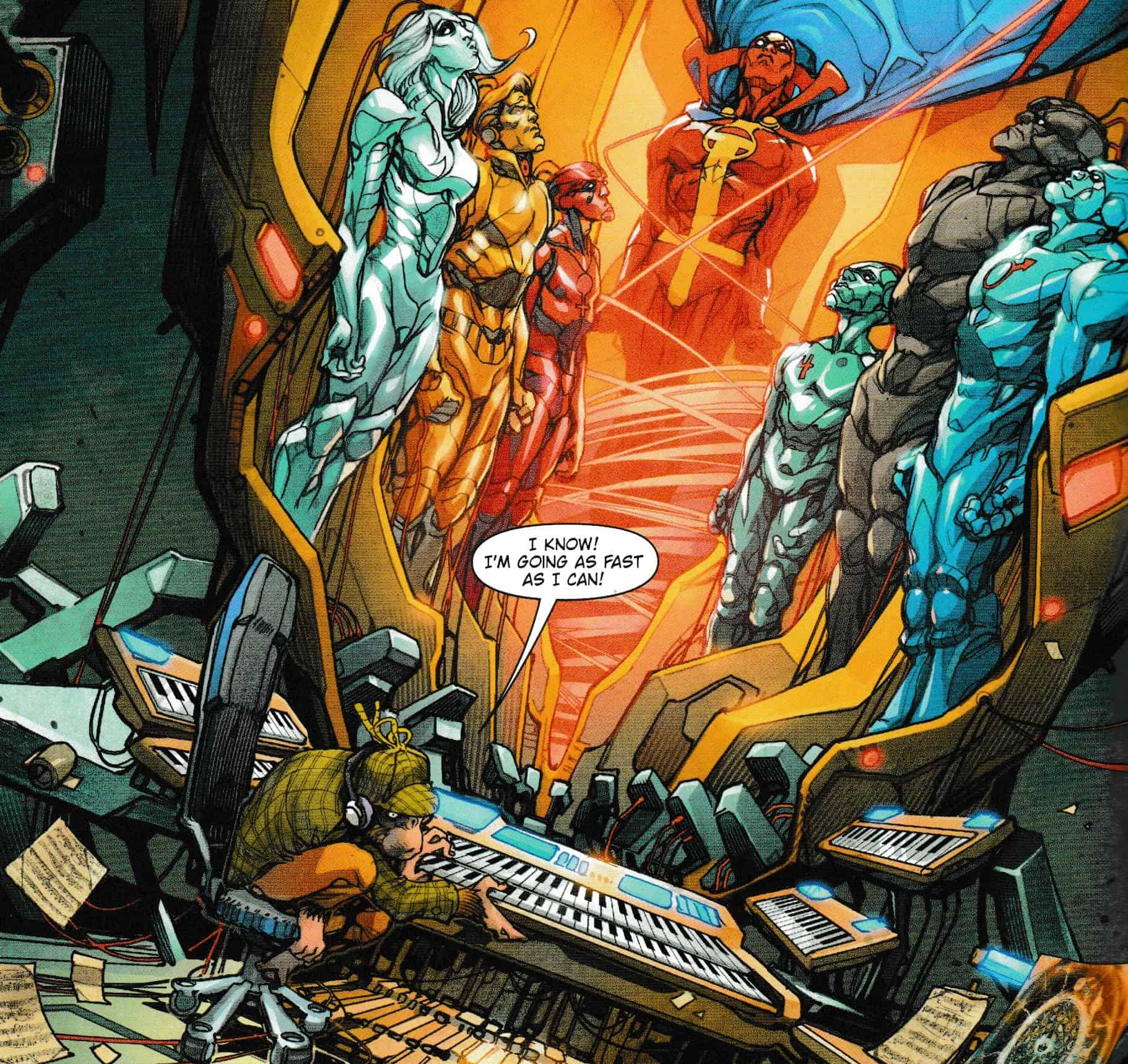 Flash, Cyborg, and Raven are trying to do just that on board the Ultima Thule, but not having much luck.  The ship is powered by music and Raven is attempting to control it, but finding the right frequency for the House of Heroes within 52 universes is proving too difficult.  Then, the Wild Hunt has found them, the Dark Knights of Barbatos.

Dawnbreaker, the Drowned, Murder Machine, the Red Death, and the Merciless all do their best to kill the three heroes, but it’s not so easy this time.  And when Flash hits the Red Death with the positive energy of creation, the Red Death turns…golden?  And together, they’re able to take down the Merciless.

But despite their minor victories, something is wrong.  The Red Death, now a hero, returns to the Knight’s carrier, pulling the Devastator with him.  And the music of the Thule is damaged, which is just what the One Who Laughs wanted as he completely obliterates the Red Death.  This was all part of his plan. 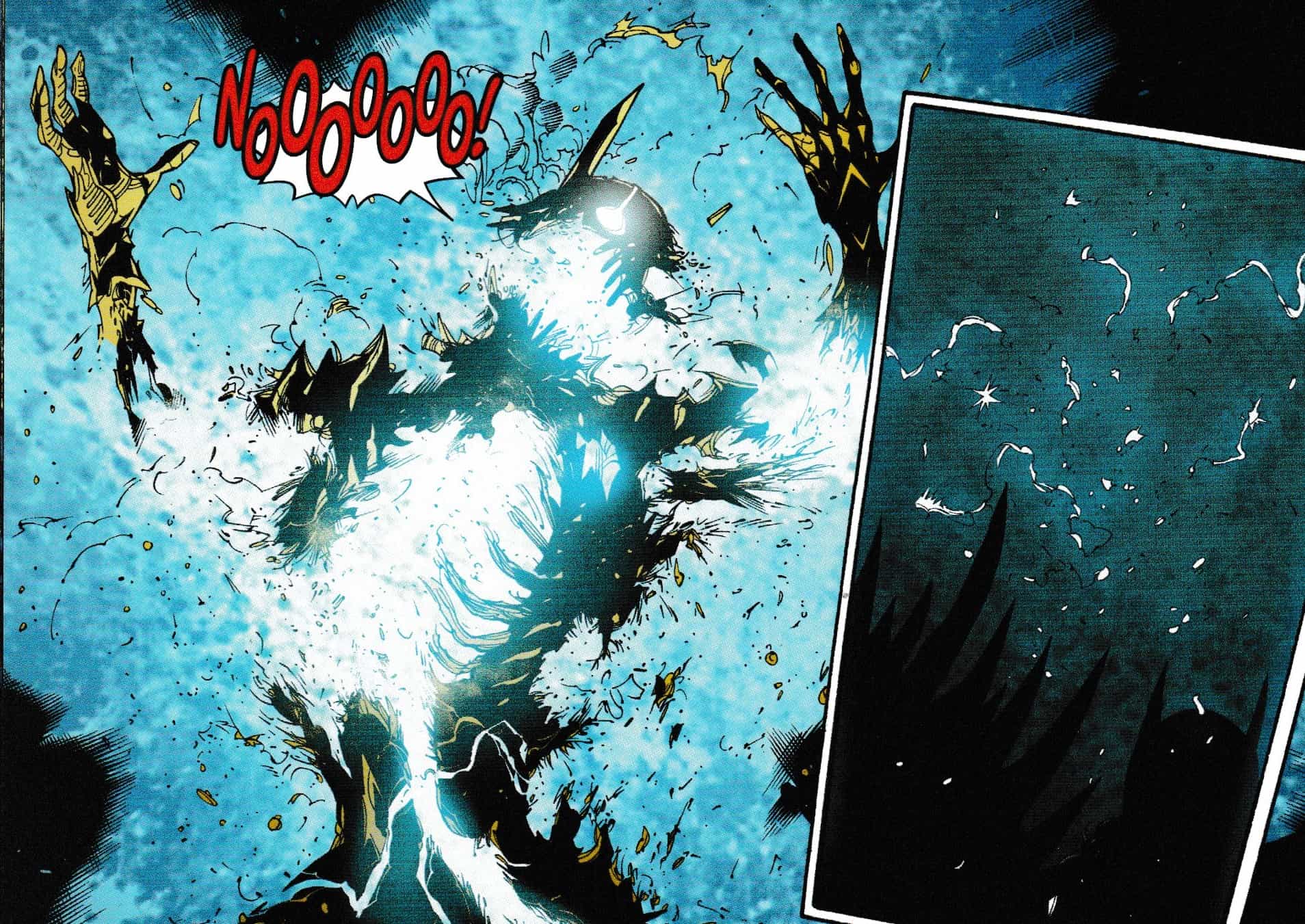 Flash and the others are elated to have finally reached the House of Heroes, but suddenly, on the island, the Red Tornado goes berserk, crying at them to stop.  He explains that it has all been an elaborate trap, that they provided the path Barbatos needed to corrupt the entire multiverse.

Flash, Cyborg, and Raven are powerless to watch as their vessel, now poisoned, heads straight for the heart of the multiverse.  The One Who Laughs takes his bandaged captive (we still don’t know who it is, but it was introduced in the one-shot) whom he refers to as the most powerful being in the multiverse and forces the captive to watch.

On the island, the scientists realize they have failed.  The end of everything has begun.  But Detective Chimp disappears in a flash of light to see more like him…super heroes, such as Batman, Aquaman, and Superman, but variations of primates.  The 53rd Universe has arrived to help.

Whew…issues like this are a reminder of just how confusing DC can be.

It’s filled with his style of craziness, his attempts at inserting meta-commentary, his stories that make almost no sense whatsoever.

And honestly, I wish I’d just passed on this issue.

It’s not just Morrison’s style that bugs me here, but that’s a pretty big factor.  It’s the cliché that Dark Knights seems to be using again and again and again.  Here, heroes.  Here’s some hope.  Now let’s take it away from you.  Every single Dark Knights series book seems to be doing this and while this is labeled as a tie-in, unlike the other tie-ins, it’s necessary to read this before issue 6 comes out.  And it’s frustrating.  It’s almost as if we know how an issue is going to turn out.  Good guys seem to get ahead and then the rug gets pulled out from under them at the end.  We know it’s going to happen.

To make matters worse, this doesn’t really get us any more ready for the final climax, leaving me to think that Snyder may be in over his head.

It’s not a horrible issue, granted.  I think I’m just tired of the same again and again.

It’s got its moments, though.  Flash’s quip to Merciless about blinking was great.  Some of the art, especially involving Raven, was enjoyable, and I loved watching Raven win out against Dawnbreaker.  Hearing that “DC” really stands for “Detective Chimp” is humorous…but really?  That seems totally out of place in this.  The silliness of seeing the primate versions of the League (including a rather large gorilla for Superman) just doesn’t belong. 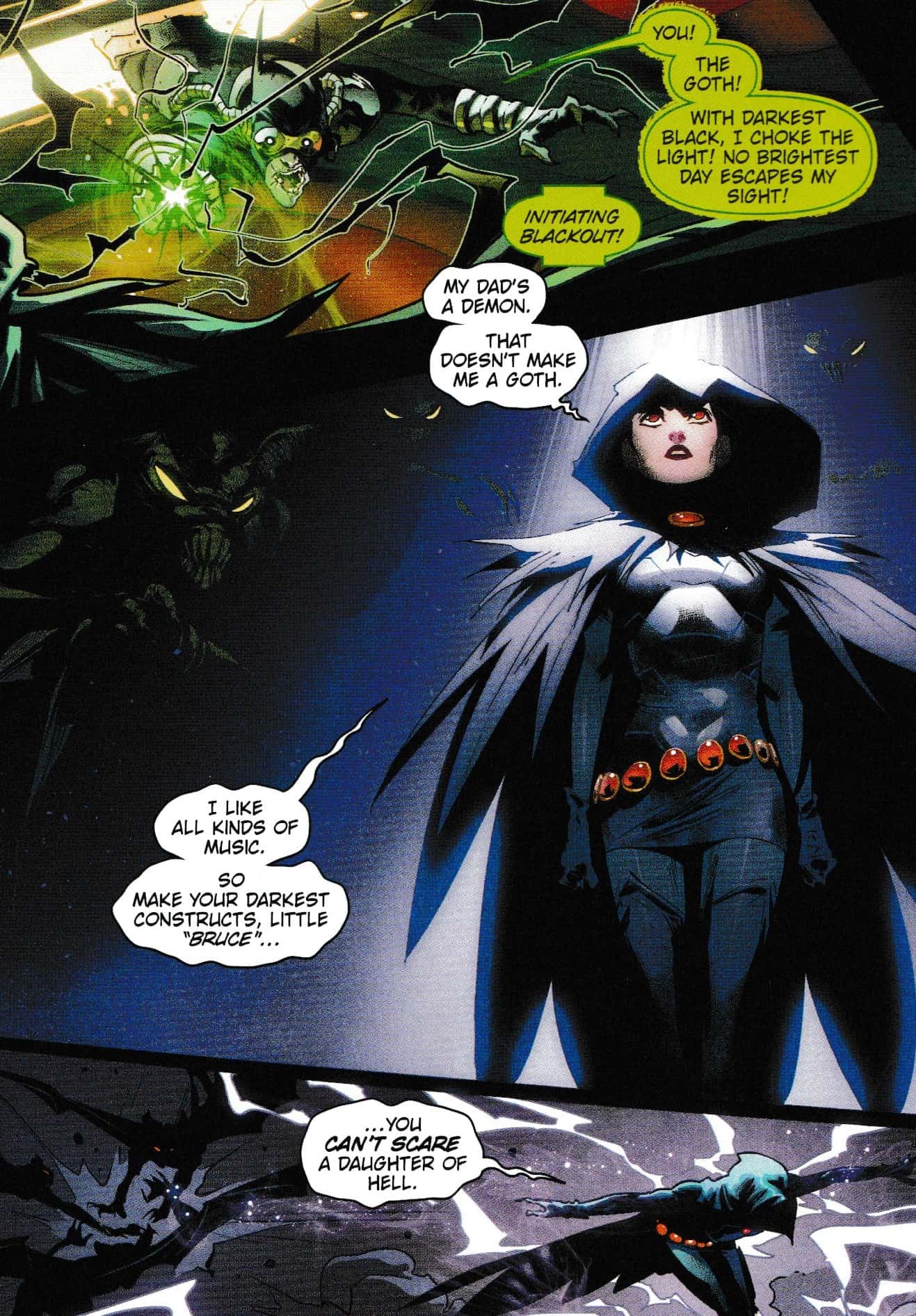 If this had been just a one-shot that was related distantly to Dark Knights, I may not have cared too much.  Let Morrison have his fun.  I may not enjoy his style, but I acknowledge that some do.  But since this issue is more like issue 5.5 instead of a barely related tie-in, it should have fit the narrative style and it simply doesn’t, leaving me not eagerly awaiting for the final chapter in Dark Knights but more yearning for this whole thing to finally be over.

Final Thoughts:  Grant Morrison joins in on a book that may be labeled as a tie-in but is more essential reading and therein lies the problem.  It’s pretty standard for Morrison’s craziness but his style of writing does not fit with the tone of the rest of the Metal series.  If you’re a die-hard Metal fan, you’ll read it regardless, but you may regret your time and money spent on this issue.