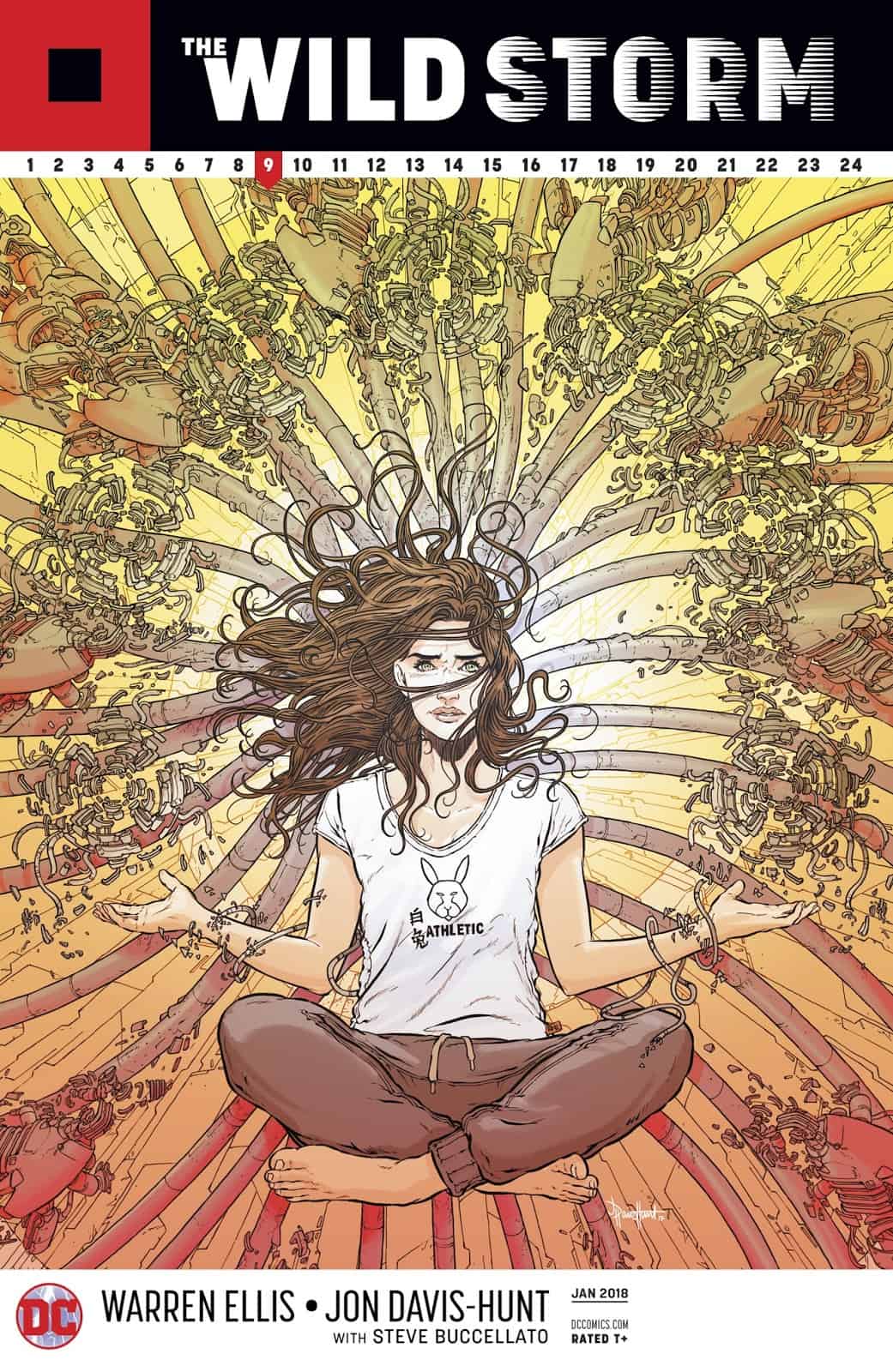 A political chess game is heating up as IO hides its betrayal of Skywatch. But Skywatch is on to them.

Angela Spica has used technology she has stolen from her former employer, International Operations (IO), to develop an exo-suit that can store itself under her skin. She uses this technology to save Jacob Marlowe, CEO of HALO, a company devoted to pushing the boundaries of technology for the modern world. But this single selfless moment has set into motion a chain of events that Angie could not even imagine.

International Operations is an organization masquerading as an American Intelligence bureau that actually runs the world. IO has sent an assassin, Michael Cray, to kill Jacob Marlowe. IO believes Marlowe’s technology is advancing too quickly and is too economically destabilizing. Angie is quickly recognized as a low-level employee in the aftermath of her heroic save of the technocrat. Miles Craven, IO’s director, has set his sights on bringing in Angie dead or alive revealing the technology she used to create this suit was actually stolen from Skywatch, an organization that rules over space. The two organizations have a peace treaty, and this is a clear violation. Miles worries that if Skywatch finds out IO had these technologies and kept them hidden, it could mean war or much worse.

Jacob Marlowe decides to track Angie down and offer her safety. He sends his team to find her, leading to an incident involving one of IO’s CAT (Covert Action Team). IO’s CAT is killed by Marlowe’s team, and Angie escapes. Eventually, Adrianna, a former astronaut for Skywatch who was killed in a space “under our dimension” called “The Bleed” and brought back to life under mysterious circumstances, catches up with Angie and convinces her to join Marlowe’s team.

Jacklyn King, head of the Analysis division for IO, has found a lead on the mysterious team who has defended Angie from their CAT operatives. Facial recognition has picked up Cole Cash as one of the rogue CAT members, but she finds that records indicate that Cole Cash died two years ago, but decides to look into it further. She has also ordered her assistant to develop a team to look into the possibility of taking data from Skywatch without them noticing.

Skywatch has taken notice that their technology has been reverse engineered and has decided to use their agency on the ground, The Division, to look into the incident involving Angie and Jacob Marlowe. Lucy Blaze, their top investigator, has been put on the case.

Angie, demanding answers, scans Marlowe and finds that he, John Colt and Kenesha are not human. Jacob explains that they are aliens who were left on Earth after losing communications with their home planet, never revealing what their mission was. He decides to grant Angie access to his lab on the condition she dumps all data from the suit into his files, as he wants to know the range of IO’s intel.

Jacob has brought Angie to his lab using Adrianna’s teleporting abilities. He refuses to reveal the location but says that Adrianna will be happy to bring her to the lab and back to his operations building in Brooklyn at any time. While Angie initially protests, Adrianna agrees that this is no trouble and that teleporting through “The Bleed” is always a pleasure for her. Angie thanks her, and Jacob gives a quick rundown of everything in the lab.

Back at IO, Jacklyn King gets word that an IO base was compromised by an unknown assailant and a few of their agents were killed while the attacker disappeared (see issue #7). Jacklyn admits to her assistant that a war has started. She leaves to meet with Miles Craven to get more information on a program Cole Cash was apart of. The director reveals the program was under the former director, John Lynch, and all information, staff, and buildings related to the program have been destroyed, killed, or burnt down. He asks Jacklyn what other projects she has operated and she admits to starting a think tank to find a way to take data from Skywatch without them noticing, but plays it off as an exercise. He reminds her not to make a move without consulting him first.

Back in Brooklyn, John Colt stares out into the rain and recalls his time living in Feudal Japan. It’s clear from this extended fight scene that he has been training his body to be a weapon for many years. The scene also reveals another of their race, Emp. John ends the scene by encouraging Emp to leave their technology somewhere more safe while picking up a small device. Back to the present, Kenesha reminds John they need to make a plan for the Hightower job. John requests Champaign and Kenisha scolds him for having such expensive tastes. He reminds her of the rigid social structure in which they lived on their planet, and how he was at the bottom. He only enjoys the finer things because he never had the chance before. 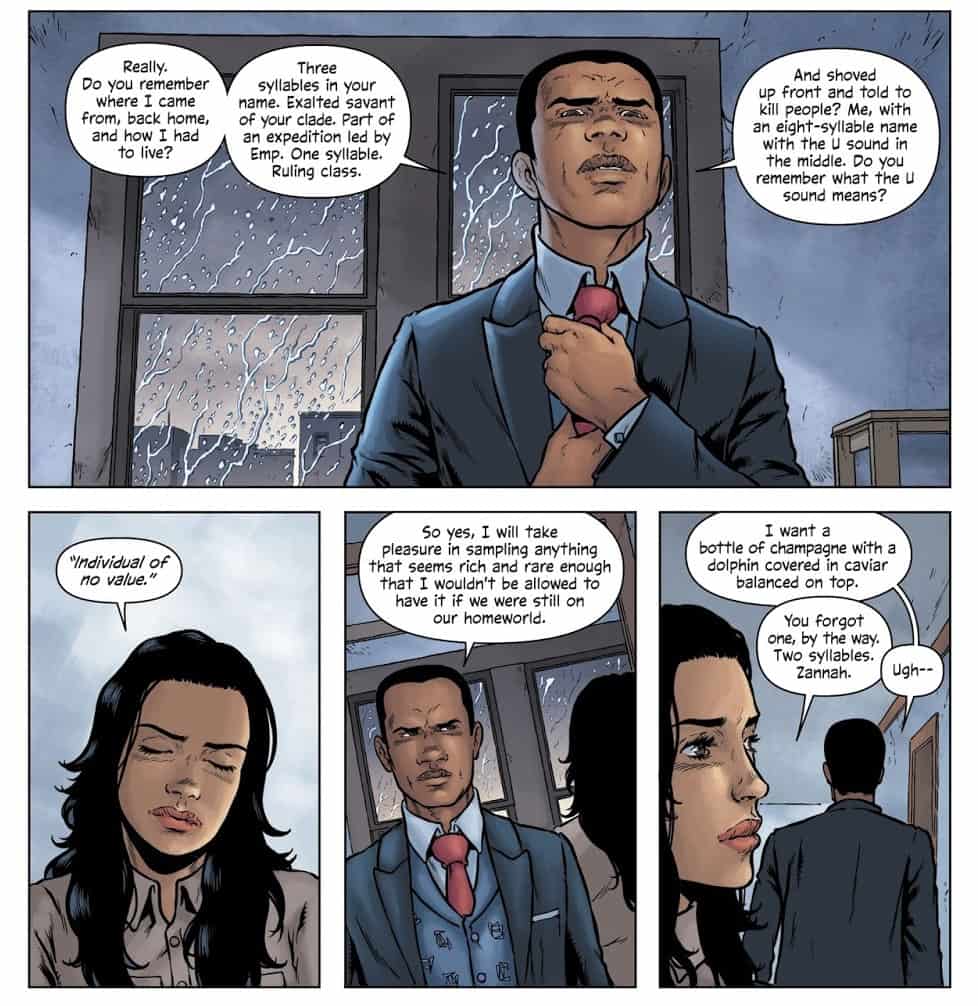 Meanwhile, Lucy Blaze gets a call from Lauren Pennington, assistant to the director of Skywatch. Lauren requests Lucy make her investigation into the exo-suit incident her top priority and to start surveillance on IO, particularly their Analysis division. Pennington explains that they believe this will assist in finding out that IO has stolen Skywatch technology.

Outside IO, Jacklyn runs into her assistant Mitch, who is ordering a rideshare. She encourages him to take the bus, pointing out the apps and conveniences created for normal people are only used as surveillance tools for IO and other organizations like them. He remarks that inside IO, he helps control everything out in the real world, but outside he just wants to be a normal human being.

Back in Jacob’s lab, Angie patches herself up. She also notices the bit of alien technology we saw in the feudal Japan scene sitting on the workbench, completely unaged. Angie decides that due to the events in the past few days, she needs to learn more about guns.

For an overall pretty slow series, this is an incredibly slow issue. John Cole’s flashback fight scene lasts an incredible 10 pages, but many of these scenes are no more than a page, and while they are not particularly interesting, they will set up for more drama in the future.

Ellis is playing a super long form chess game. The entirety of the series to date has focused on political moves and motivations that will lead to a greater climax when the time finally comes. However, we haven’t gotten there quite yet. The only thing saving this issue, and holding the series in good standing, is David-Hunt’s art. The fight scene in feudal Japan is beautiful. Clearly, when David-Hunt is given the pages to breathe, his mastery of action sequences comes to life. Every moment is rendered beautifully leading into the next. 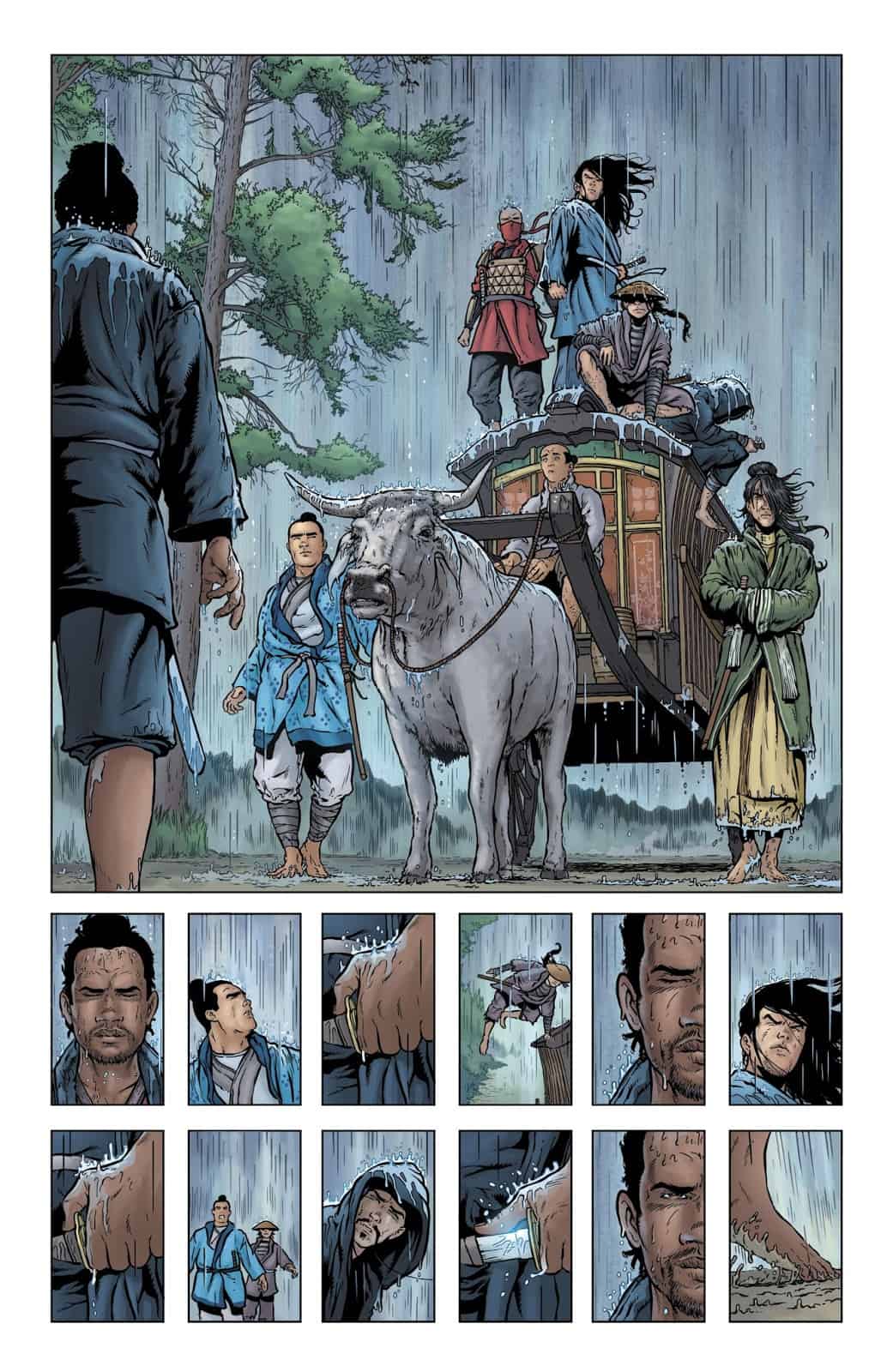 Final Thought: Probably the slowest issue of an already slow-burn title. Eventually, we will reach a climax that will be exciting and explosive, but to say this issue is anything but transitionary would be a lie. When 10 pages are devoted to only a fight scene, it’s clear there is not enough story to fill out the 24 issue arc. But those 10 pages are beautifully rendered, so if you’re looking for great art, you’ll find a lot of it here.