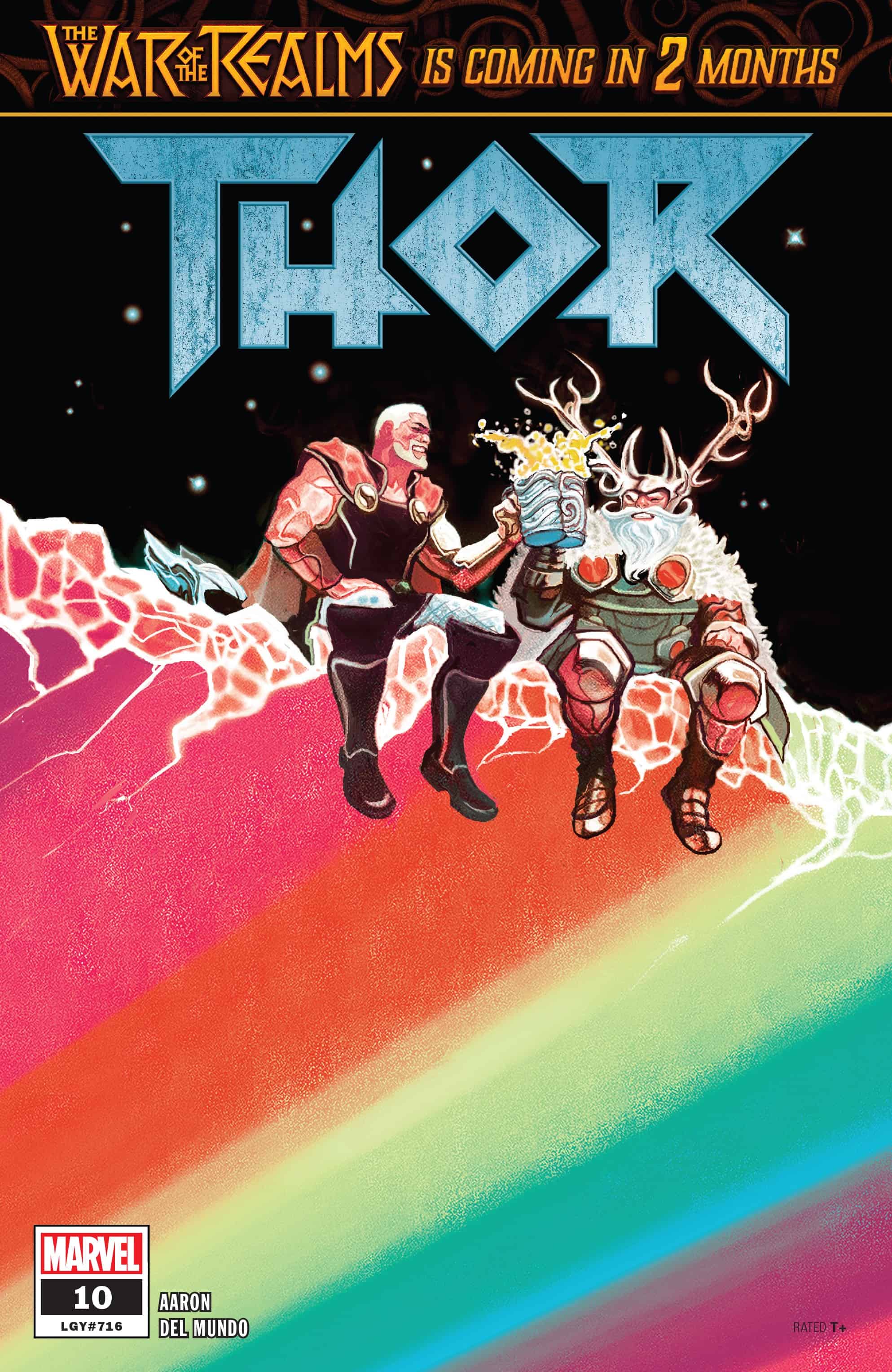 As Odin drinks himself into a sullen stupor among the ruins of Asgard, Thor and Loki experiment with the roles and boundaries which come with being somebody’s son. 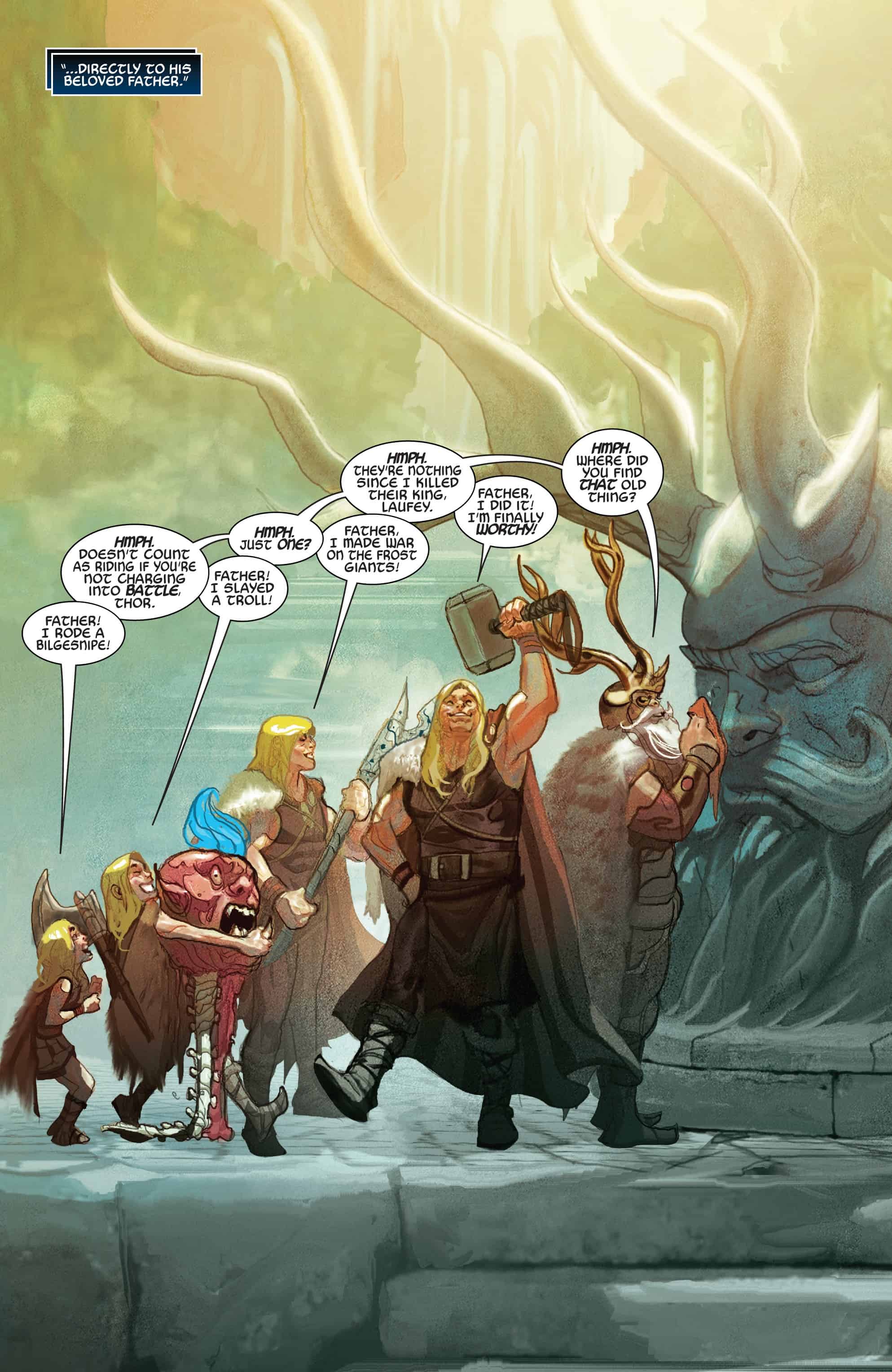 This issue sees Jason Aaron considerably upping his game, exploring a range of emotional and psychological nuance which is a far cry from the unconsidered, rather two-dimensional material of the previous book. This is possibly due to the fact that Aaron is writing about men, but I am more inclined towards the view that he is simply more comfortable writing exploring the experiences of Thor and Odin. It cannot be argued that he doesn’t know these characters extremely well, and it was interesting to see him push their well-trodden relationship into new territory. 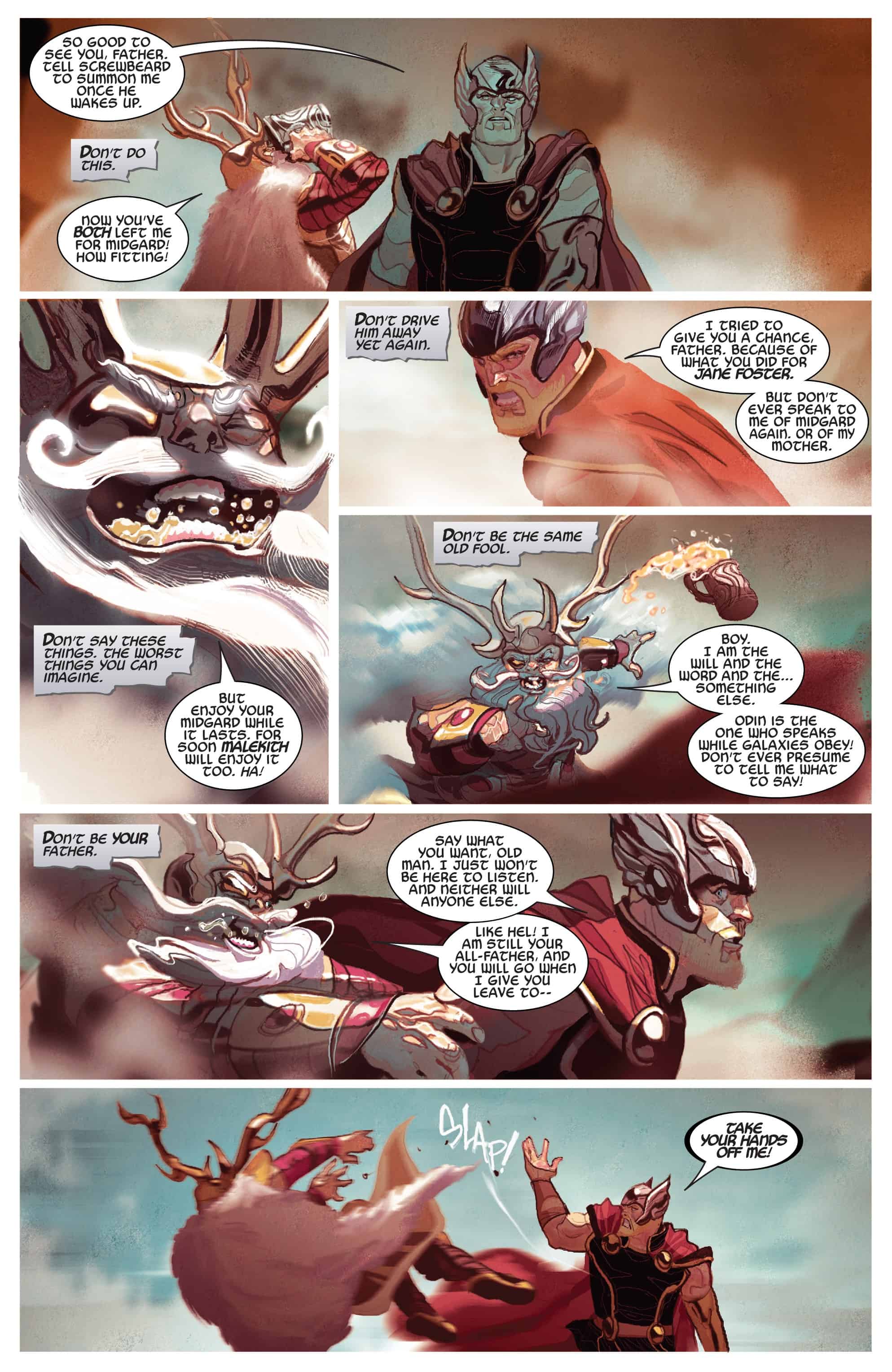 His exploration of Odin’s reluctant, cyclical journey into self-awareness and the helpless disconnect he felt between the actions that he desired to take (expressing pride in his son; asking him for help) and the seemingly unbreakable patterns of abuse (his violence toward Thor mirroring the brutality visited on him by his own father) was exceptionally well conceived and executed. 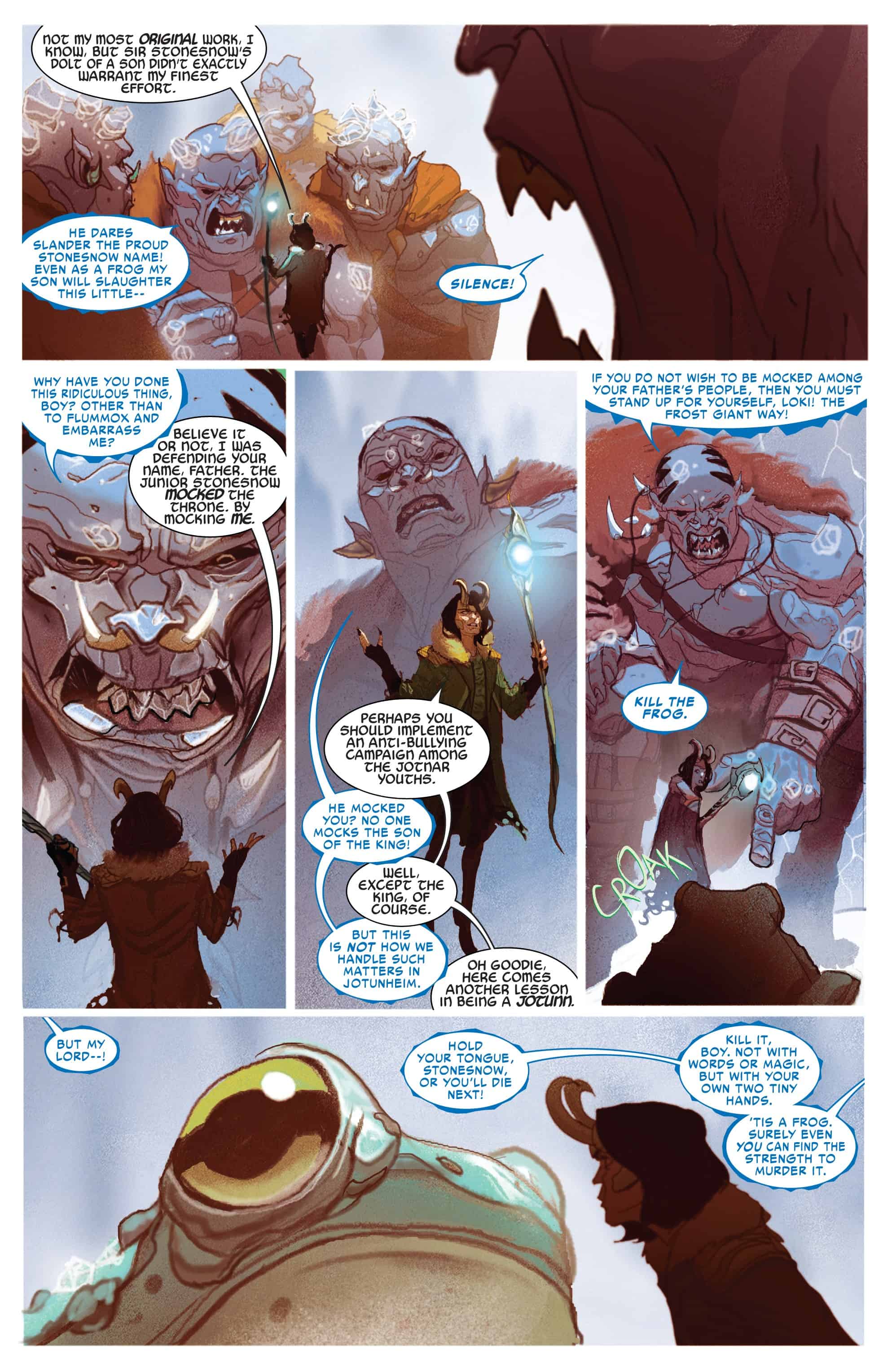 It was also interesting to see Laufey testing the boundaries of Loki’s (admittedly loose) morality. Nurture and Nature come into conflict again and again in Loki’s psyche, but it seems that the rough justice of Asgard has left a subtle imprint on this Odinson’s mind. The god of crossing boundaries has found a line he will not trespass over. It will be fun to see what this discovery will do to him. 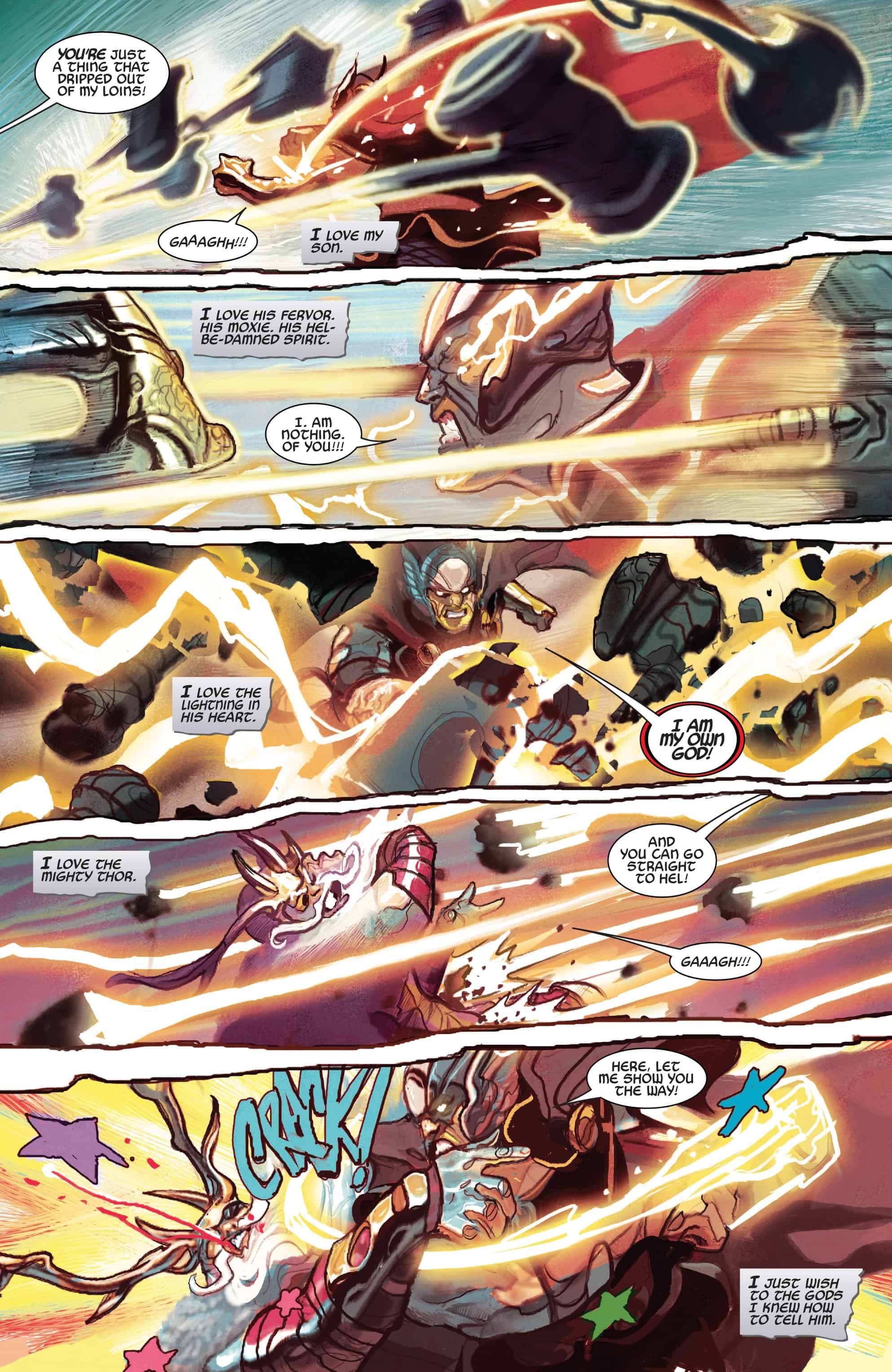 There was some incongruity in the resolution of the story. Why would a god seek out a mortal, even Tony Stark, to host his AA come-to-Jesus revelation? In AA most mentorships are hierarichal, or at least joined between equals, and Odin can never, even in the outer darkness of his grief, humble himself before a man. Clearly this was a favor to the readers, but it almost works. They meet, at least, on the field of arrogance.

As for the art, Del Mundo continues his near-virtuoso performance in pen and ink. Violence and emotion are rendered with equal parts operatic swoon and subtle tenderness. The moment when Laufey stepped on the enchanted frog and splooshed his innards out was shocking and comedic, but balanced by Baldur’s tears as he watched his family unravelling from the dark of fallen Asgard. The colouring alternated, appropriately, in richness and depth, according to the script. And Joe Sambino’s lettering shuttled the exposition along with sinuous smoothness. 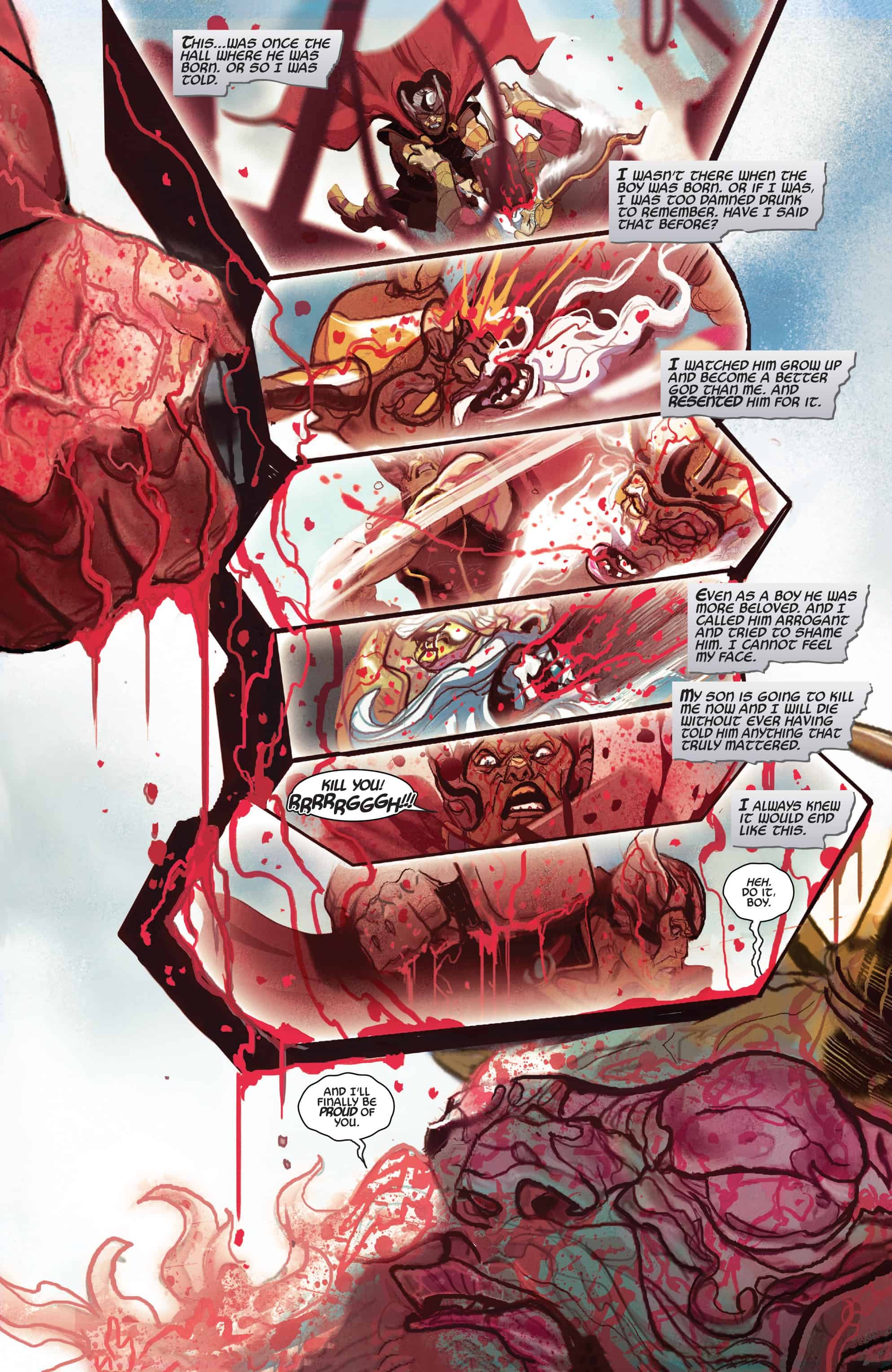 There was one appearance by a woman in this text: the All-Mother sat in her kitchen and talked about her son. It is just barely possible to argue that there wasn’t room for a woman in this script, but only if you are operating from the perspective that men are the majority in every world, fictional or otherwise, and therefore the writing doesn’t ultimately come down to the whims and prejudices of the writer.

Still, this issue was much improved from the last. I hope that this is a trend rather than a happy fluke.

This issue was more considered than the last, written with greater psychological depth and narrative nuance, possibly because Aaron was more comfortable with the characters. Even so, the only female role was occupied by a woman who was talking about her son, while literally in the kitchen. That's...not great. The art was, as ever, perfectly suited to the story. It's worth picking up.