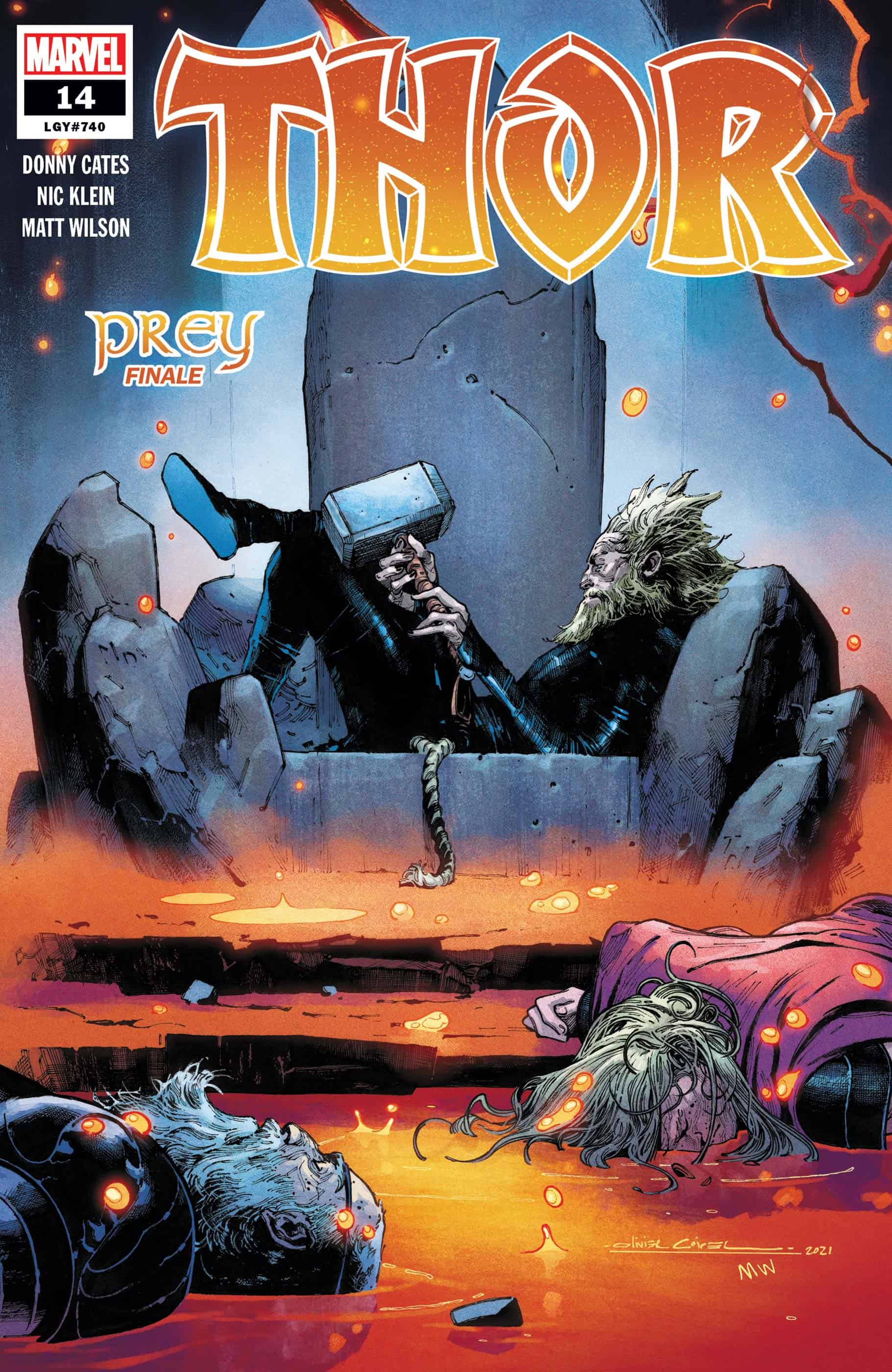 All-Father Thor breaks out of his prison! But Donald Blake has amassed more power than the King of Asgard can know. One thing is certain: When the hammer comes down, only one man will remain standing.

Thor #14, which concludes Donny Cates’ second arc as Thor writer, is one of the best Thor issues in quite a while. While some of Cates’ earliest issues could feel like a series of drawn-out fight scenes, this issue is a rewarding balance of punishing action and an equally punishing character-driven narrative. Cates’ dialogue deftly threads the needle between too much and too little. Panels focused on a character silently listening or thinking often have as much impact as statements made directly, a fact which also shows the strength of the book’s artistic team. 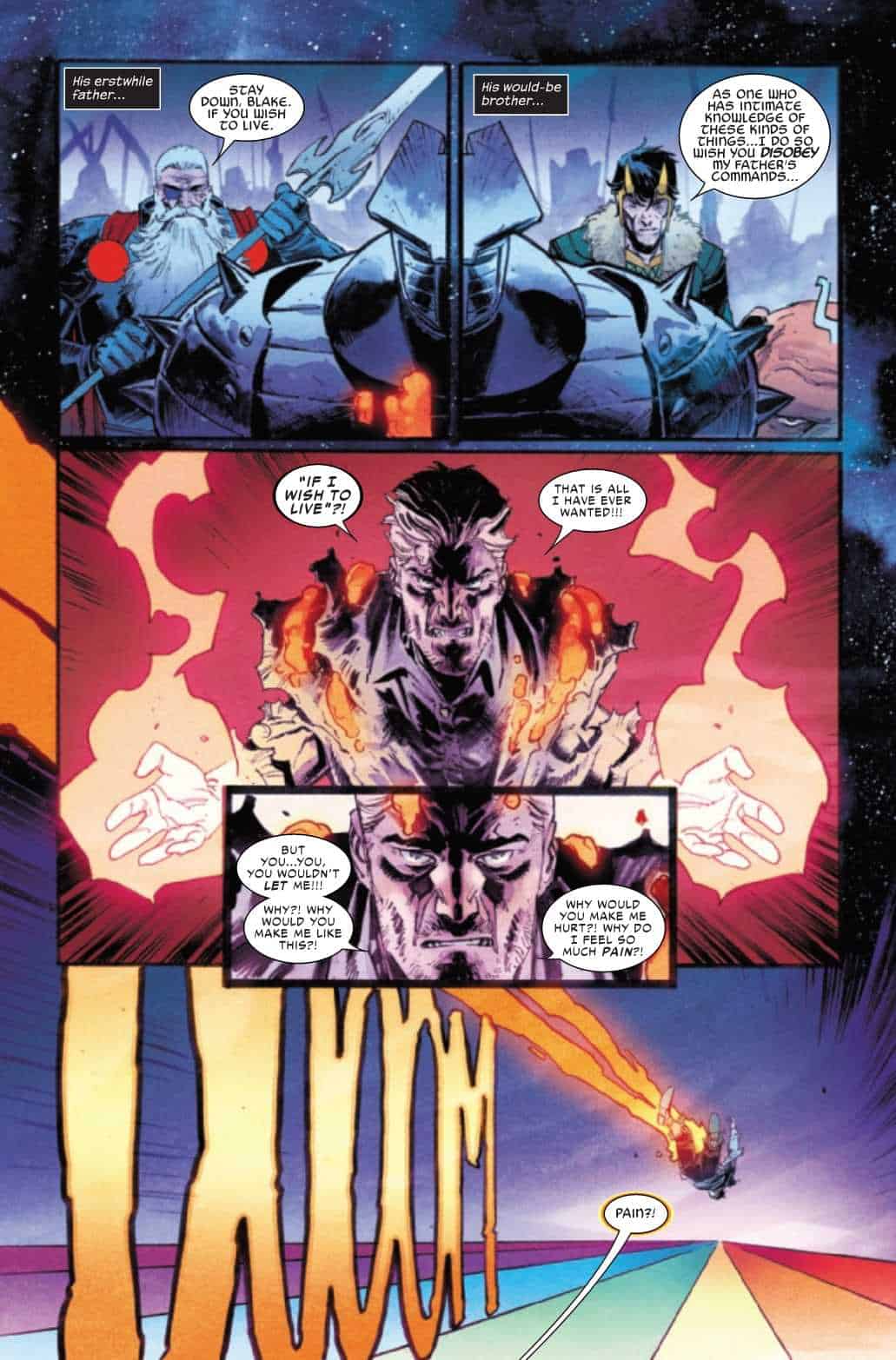 While the issue’s cover is certainly attention-grabbing, it may also feel misleading given an issue which is driven more by emotion than action. The issue revolves around what ought to be done with Donald Blake — if death or punishment is a better reward for his actions. Thor and Loki are often both at their most compelling when contrasted against one another, as their relationship throughout this issue shows. By casting Donald Blake as another wronged child of Odin, Cates is also able to contrast Donald more directly against both Thor and Loki. Thor and Loki — now both rulers in their own right — have their own ways of seeing and responding to Donald, and both responses are very different from their father’s. By the issue’s close, the audience is left to ponder if Donald Blake’s end fits his crime, how relationships between these characters have changed over the decades, and to what extent each character is responsible for any of it. 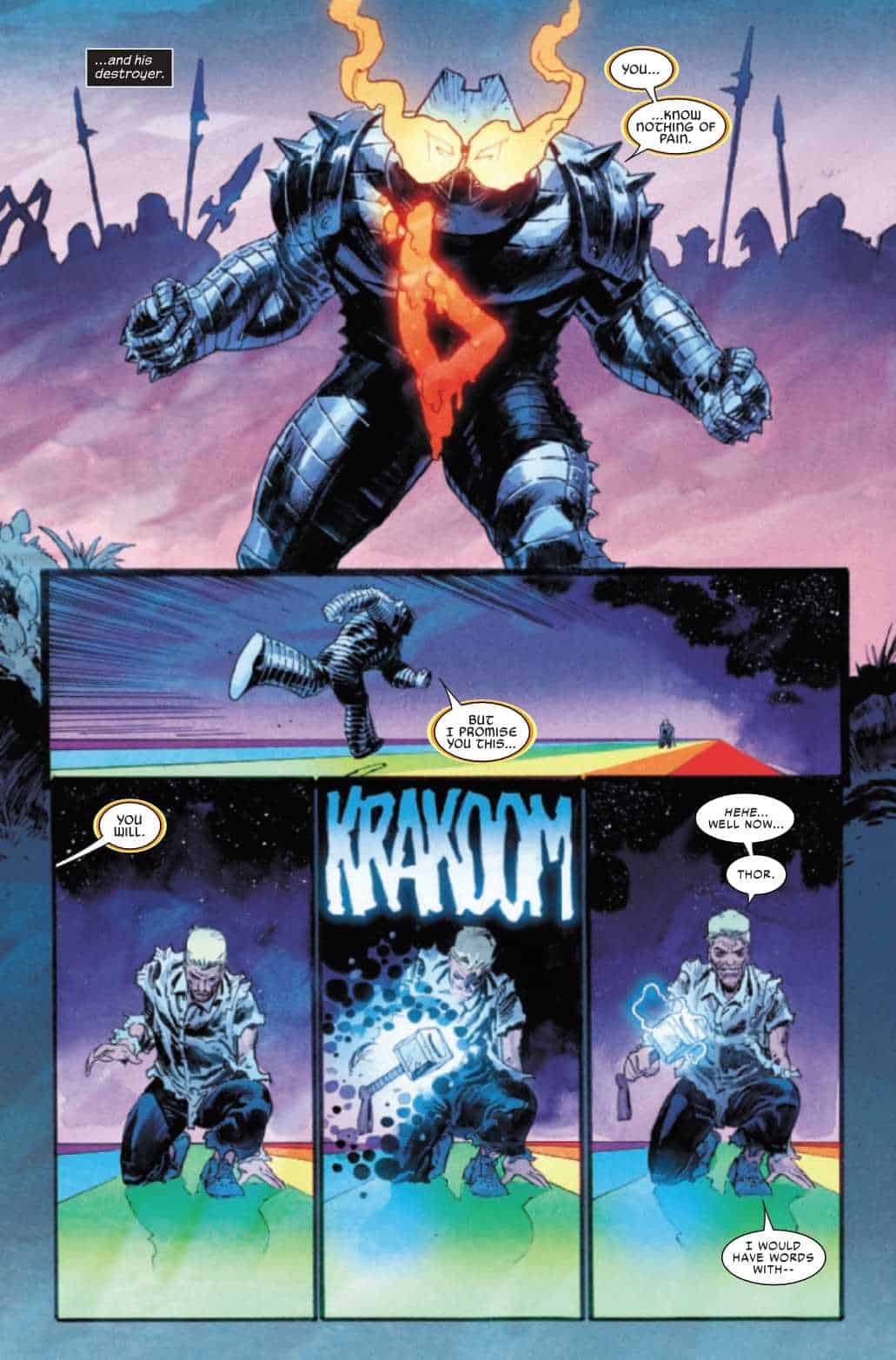 The art from Nic Klein and colorist Matt Wilson does a beautiful job at magnifying the strained and raw emotionality present throughout the story. Depictions of both physical and emotional pain truly hurt. This is especially true for the issue’s satisfying but brutal double page spread. Every scrap of bare flesh feels solid and meaty, but more than anything pallid and fragile. This sharp contrast of realistic human frailty with the fantastical is brought home by the saturated spectacle of the Bifrost and widespread use of Kirby krackle. In the presence of gods, all of whom seem larger than life — highly saturated, armor gleaming — Donald feels not just mortal but pitiful. Stripped of the “bad guy costume” and any shred of power, one can feel sorry for him.

Thor #14 is a brutal read worth every Thor fan’s time. Visceral & striking, it always puts its characters — who they have been and who they are becoming — above all else.