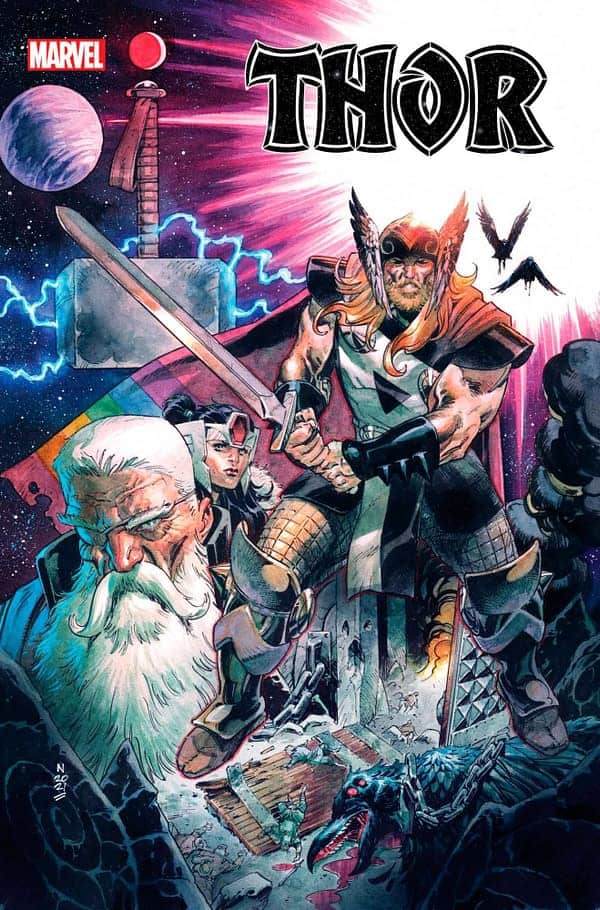 Thor is the God of Thunder and All-Father of Asgard. Of late, he has had trouble with his hammer, Mjolnir — sometimes, it is too heavy for him to lift, and other times, people are able to lift it despite the fact that no one but Thor should be able to. Deciding Mjolnir’s “disobedience” must be because he is now Asgard’s king and no longer its warrior, Thor left the unruly hammer within Avengers Mountain so that he could focus on being a better king. But now the Avengers report that Mjolnir has been stolen. Thor has tasked his master of spies — Throg, the Frog of Thunder — with tracking the hammer down.

While “God of Hammers” may have begun as a quip by Odin in 2017’s Thor: Ragnarok, the moniker is now gaining a new ominous life in the Thor comics. Thor #19’s cover by Nic Klein — also returning as interior artist — has a floating-heads, movie poster quality befitting of the new arc’s lively and delightfully over-the-top beginning. 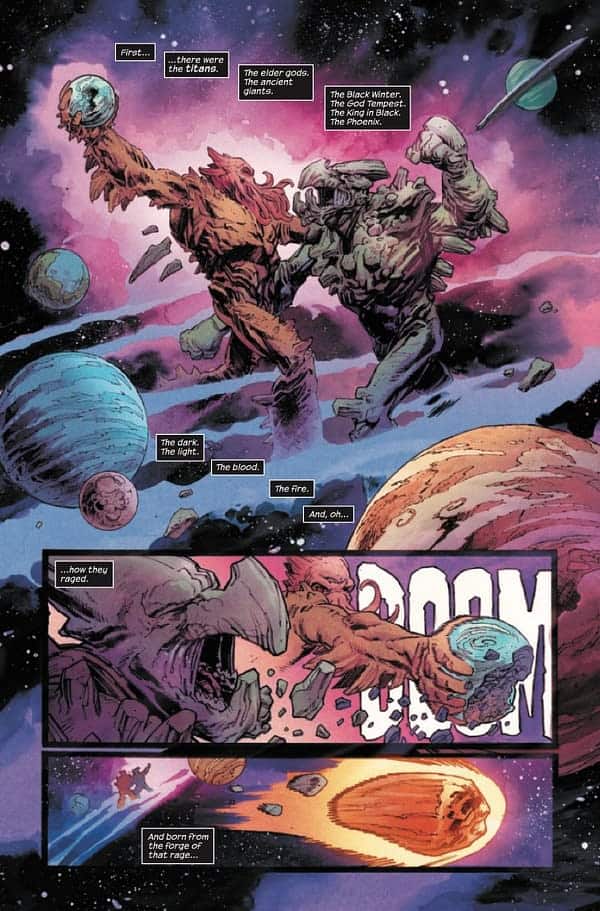 The first few pages, which have only light narration from Donny Cates, are where Klein’s art and Matt Wilson’s colors shine most. As titans throw punches, dinosaurs die, and planets turn to fiery smithereens, the first half of the issue passes quickly but sets the tone wonderfully. The incorporation of onomatopoeia into the artwork is one of the issue’s most memorable features. The word “DOOM” reverberates throughout the issue’s early pages. For long-time/veteran Thor readers, this is a notable allusion to Walter Simonson’s seminal Thor run, in which “DOOM” both heralded the arrival of Surtur and was the sound of Surtur forging his Twilight Sword. As with Simonson, Thor #19’s creators similarly use “DOOM” in a doubled way, as both sound effect and ominously foreshadowing the arrival of the God of Hammers — whoever they are. 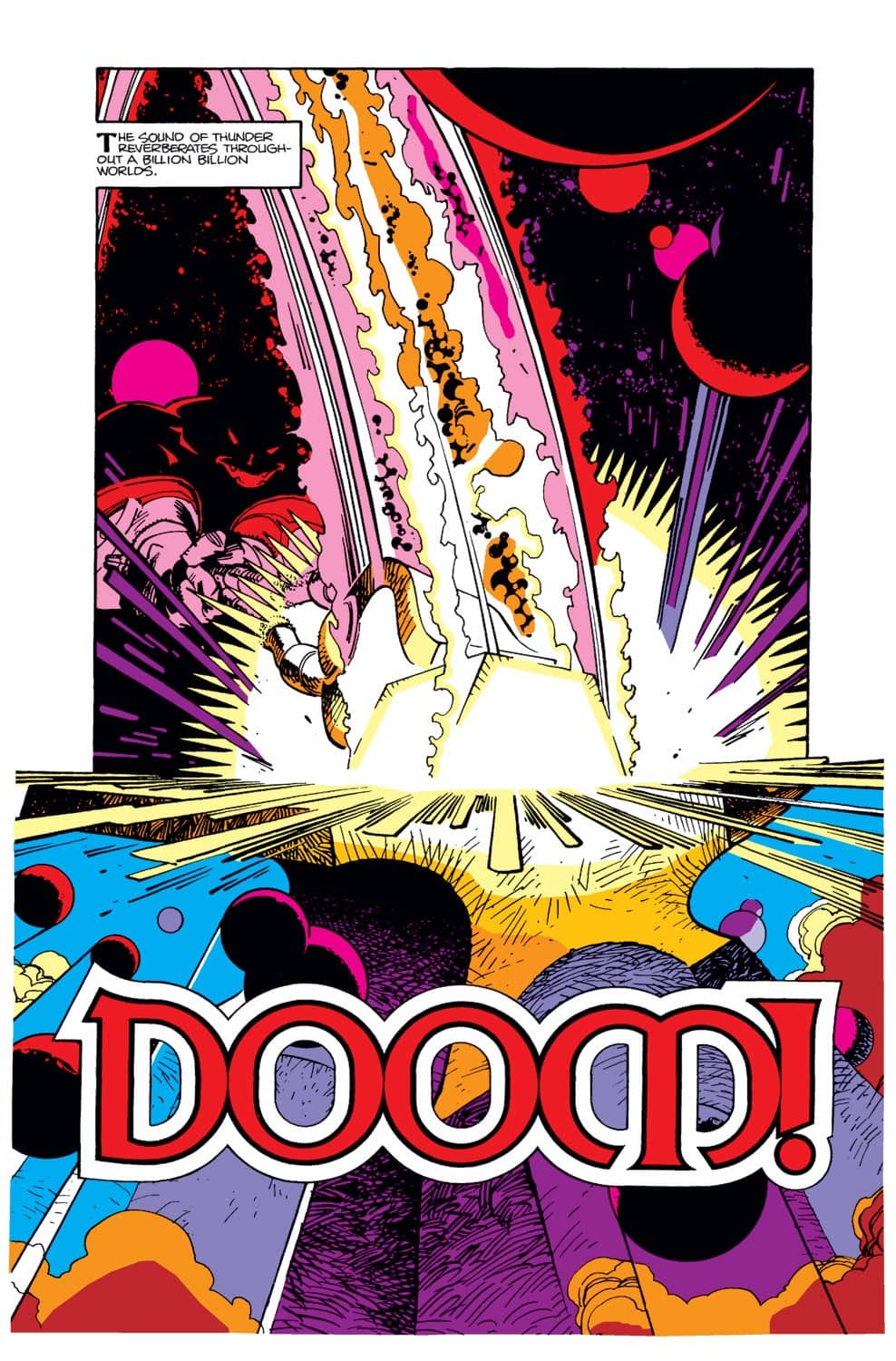 While Thor’s exposition dump to Sif mid-issue brings this dynamic opening to a crawl (similarly true of the narration as Thor travels to find Odin), the issue picks up again in the final pages and leaves readers with a tantalizing cliffhanger. Donny Cates’ transformation of Donald Blake into a tragic but disturbing antagonist in the comic’s last full-length arc showed Cates’ ability and potential to craft memorable new adventures for the Thunder God. As Cates expands on the mystery of Mjolnir’s disappearance and its path of destruction, Thor #19 promises another suitably epic arc. 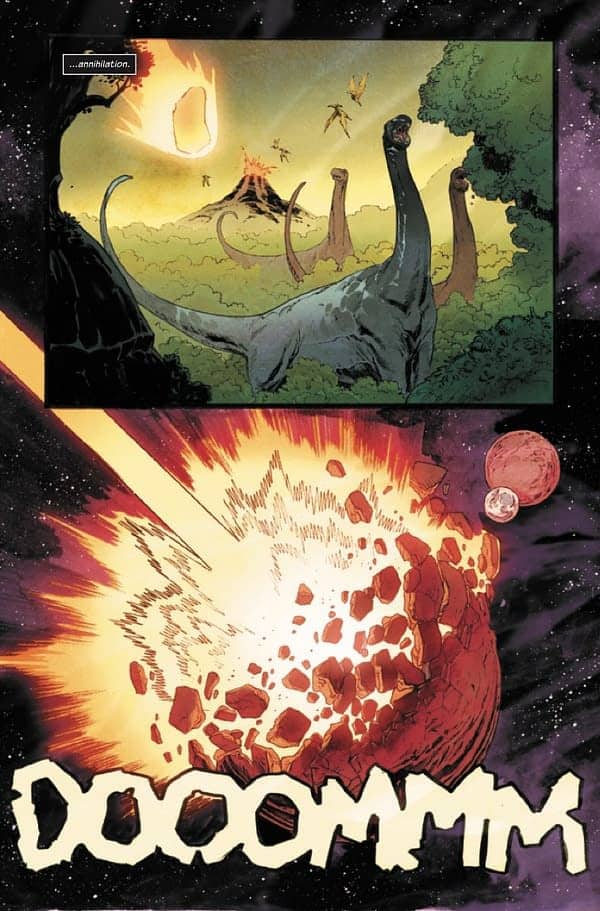