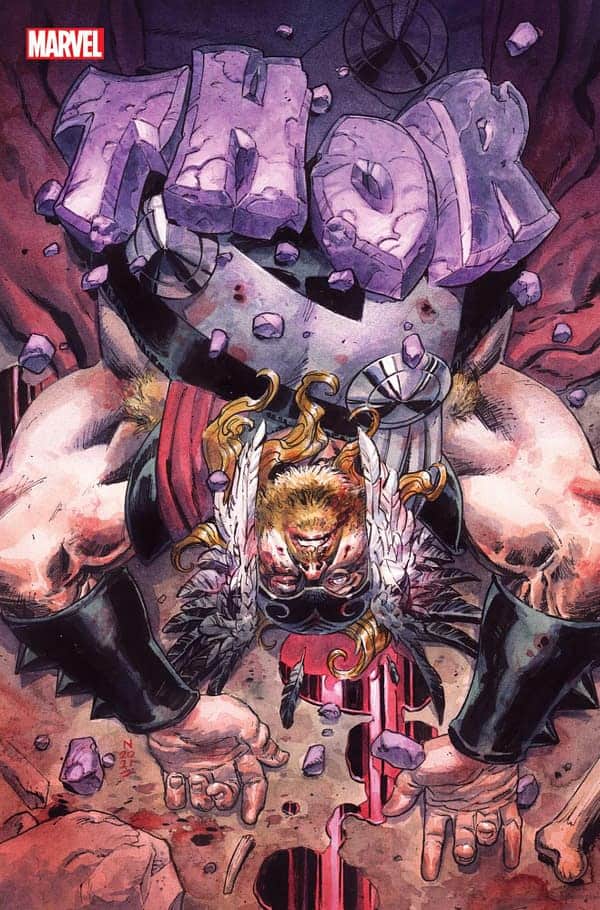 Thor has been beaten down, and the God of Hammers is about to make the final blow! Is this the end of the All-Father? Prophecies do come true, after all…but not always in the ways they are foreseen. For there is one last chance to save Thor—but at what cost?! Plus: The shocking origin of the mysterious God of Hammers is revealed!

On the cover of Thor #21, the Norse thunder god’s bloodied body lies amidst a pile of rubble — teasing the brutality within the issue. As per previous arcs of the current Thor run, the “God of Hammers” arc turns another central element of Thor canon its head: Thor’s relationship with his hammer Mjolnir. Thor’s first arc was dominated by a series of large “Thor vs [Other Hero]” fights with little substance by way of character development. However, the following arc’s focus on Thor’s battle against his former alter ego Donald Blake seems to have marked a pronounced and welcome shift into work that better balances action with character. 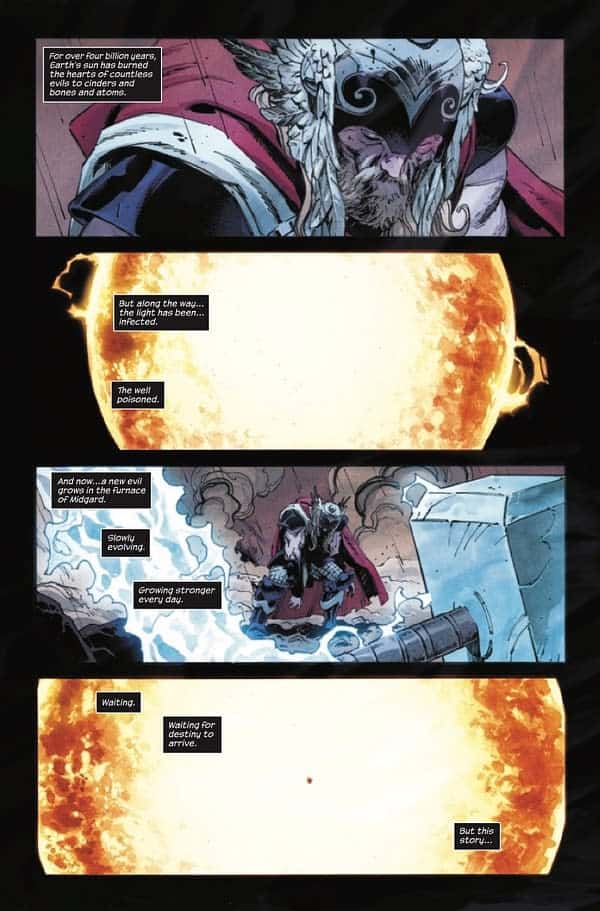 At the end of Thor #20, the final pages revealed that the God of Hammers was in fact Mjolnir itself, who has taken on a humanoid form and (as Thor #21 concludes) joined forces with one of Thor’s classic adversaries. In terms of character design, Mjolnir has an objectifying, bafflingly busty, wasp-waisted physique. That said, Nic Klein does an excellent job giving a sense of energy and dynamism to her, by colorist Joe Sabino’s electric blues. 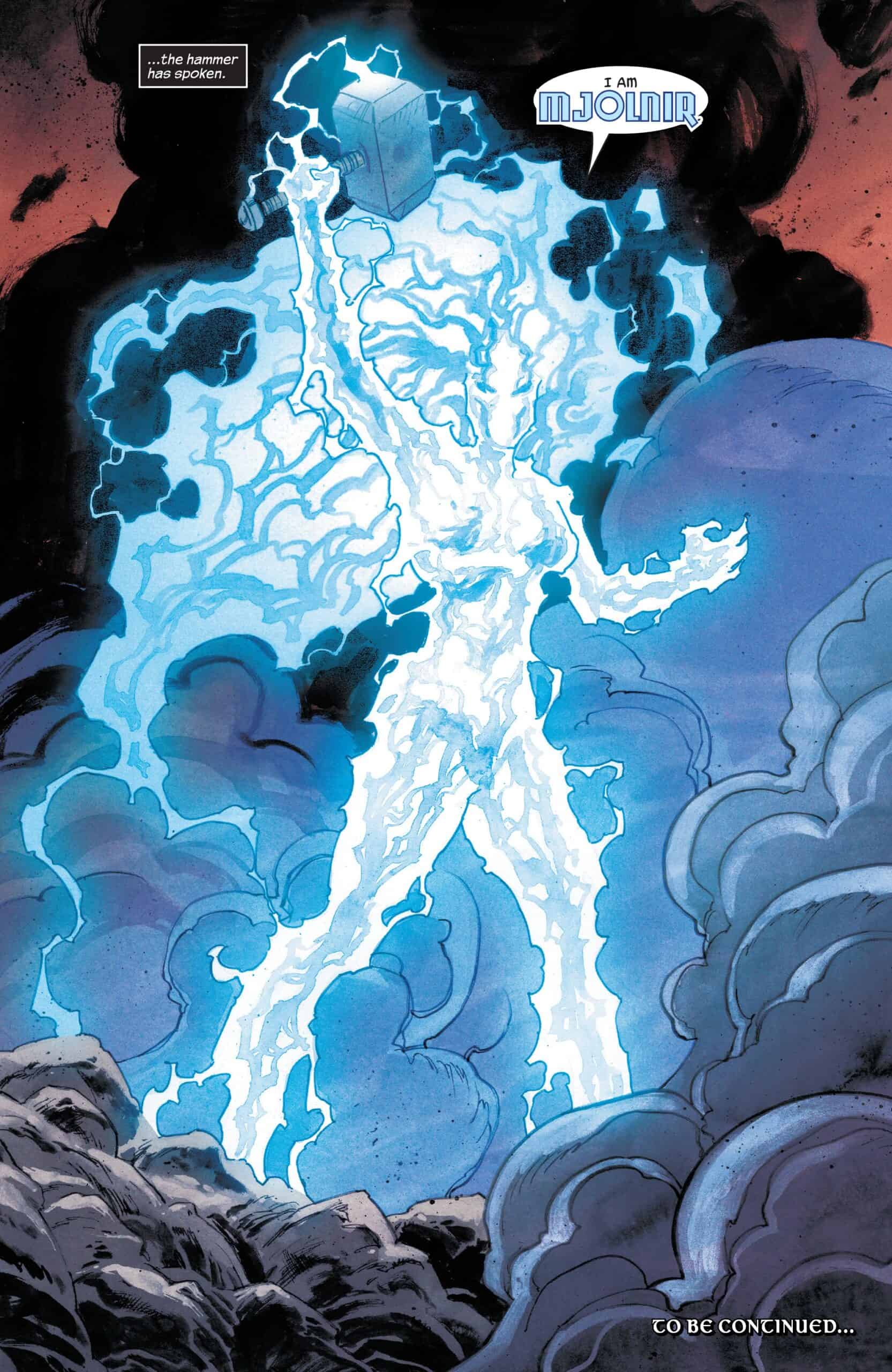 Mjolnir as revealed at the end of Thor #20

Through this issue, Klein, Sabino, and writer Donny Cates are quick to establish Mjolnir as a serious threat. While previous issues have shown the corpses and ruins left in her wake, the fight scenes of Thor #21 are more intimate and visceral by comparison. Blood spatters. Muscles tear. Bones shatter. Mjolnir’s bright blues are balanced by the dull brown of bone, grey of stone, and meaty reds of open wounds. When Mjolnir breaks Thor’s arm, he seems awed by her very ability to do so, which feels at odds with previous comics, given that Thor lost an arm to Malekith only four years ago. Nonetheless, Mjolnir’s dramatic acts of violence towards Thor and Odin — all whilst Villain Monologuing like a pro — result in a showstopping issue. 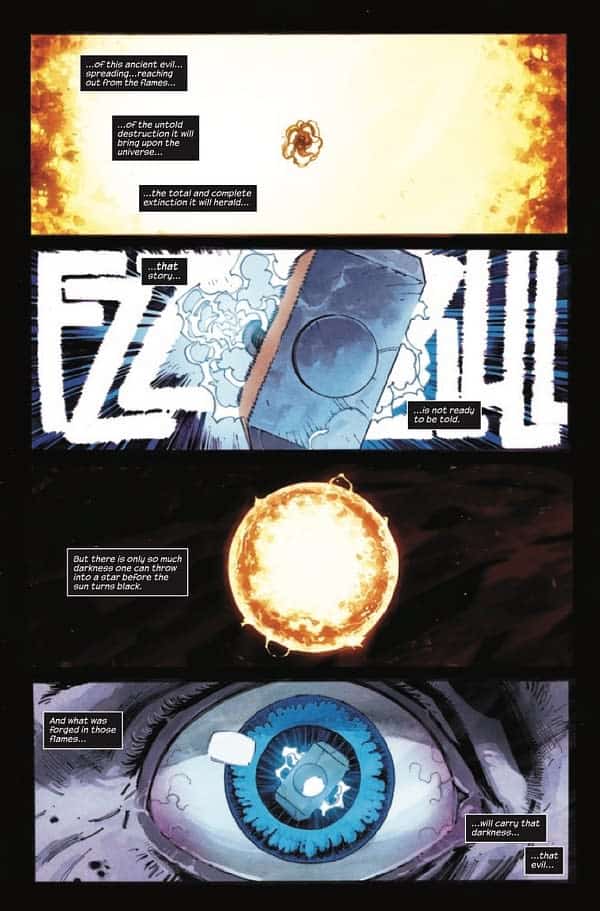 Thor #21 is an action-packed visual feast. Each and every issue seems to break down Thor further than the last. Where will all of this destruction and deconstruction take us next?