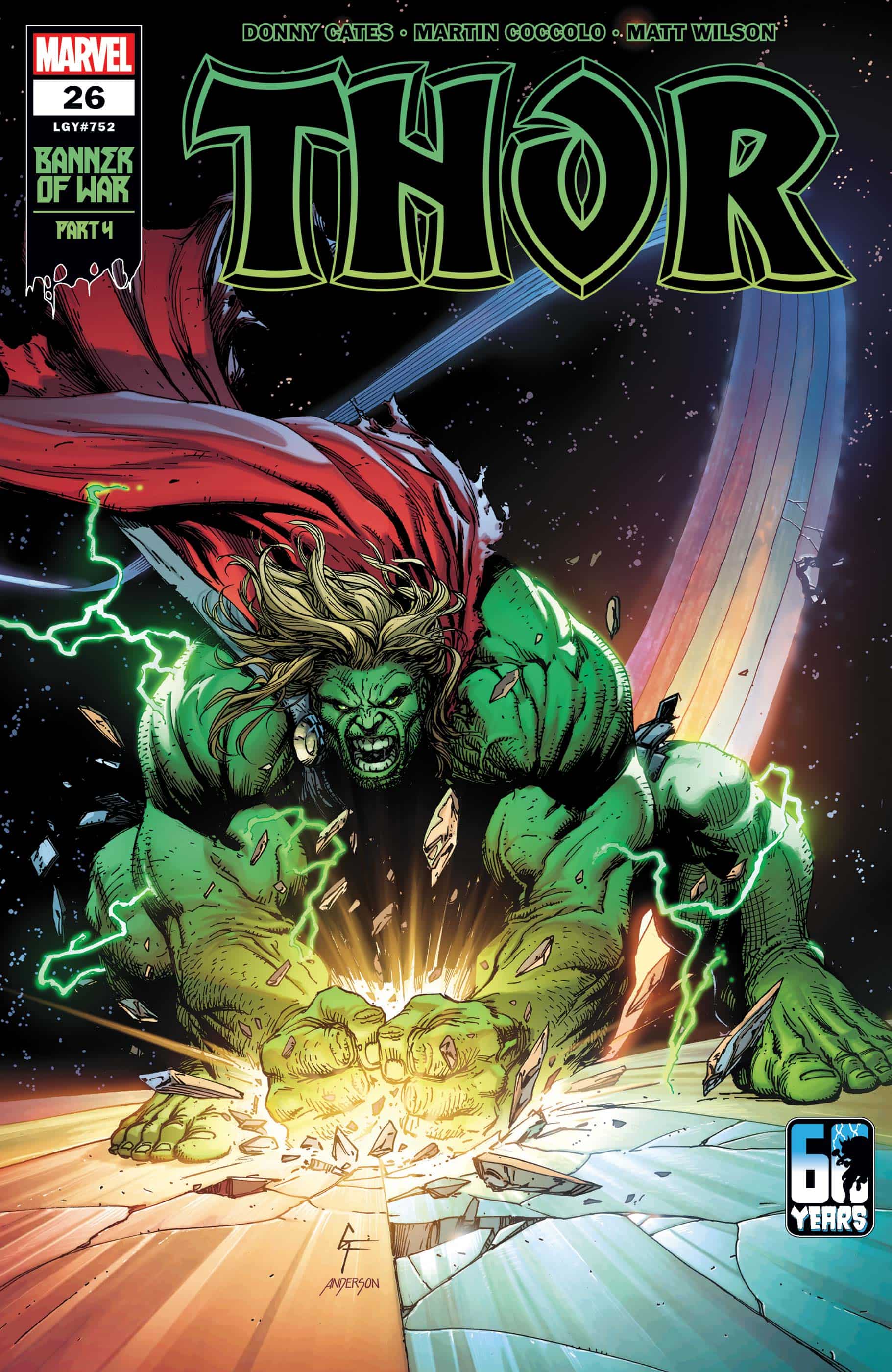 Thor #26 finds our titular hero “hulked out” after being possessed by Titan. Now, he’s fighting Hulk on the Bifrost and it’s Asgard that will pay the price.

At his best, Donny Cates writes complex, compelling antagonists and twisting plots sure to keep readers returning for more. Thor #26 is not that. In some ways, it’s a return to form: Cates’ earliest Thor issues were fight after fight with a bit of connective narrative tissue to tie them together. In terms of both dialogue and narrative, this Thor issue and the larger “Banner of War” crossover event it is part of recall a child smashing action figures together in a sand box until someone says it’s time to go home. Except for expository dialogue, screams, and Hulk-speak, the comic is largely wordless. Even the comic’s traditionally over-the-top omniscient narrator scarpers after two pages. Of course, comics like Hawkeye (2012) #19 and Hedra have shown that silence in comics can say a great deal. But this comic isn’t terribly interested in exploring silence, anger, or the relationship between the two. Cates’ sparse dialogue and narration could act as an excellent opportunity to showcase Martin Coccolo’s artwork. However, a textually-light or silent comic works best if the artwork itself says something. But Thor #26 is, like an action figure kept in its packaging, primarily of value to collectors. It is pristine and plasticine with little below its surface. None of this to say that fighting in comics is fundamentally bad. Who characters fight, how they fight, and how it’s framed can all reveal significant things about the characters in a story. In Banner of War: Alpha, Coccolo framed Thor and Hulk’s fight — which began in an arena — with the visual language of Mortal Kombat and other fighting games. In a sense, it playfully invited us to join the arena audience, to “choose your fighter.” But Thor #26’s fight between Hulk and Hulked-Out Thor doesn’t retain that visual humor, nor does it share standard Thor artist Nic Klein’s visceral brutality. Coccolo’s compositions are proficient without experimentation. Any meaning that might be added via color symbolism by colorist Matt Wilson goes equally unexplored. Instead, it’s a comic that takes ten minutes to read and visually polished without being memorable. Most of its important plot is showcased by Hulked-Out Thor destroying the Bifrost on the cover.

Thor #26 continues "Banner of War’s" endless fight scene. It’s a fast read and a pristine-looking comic, but its story is only surface deep.