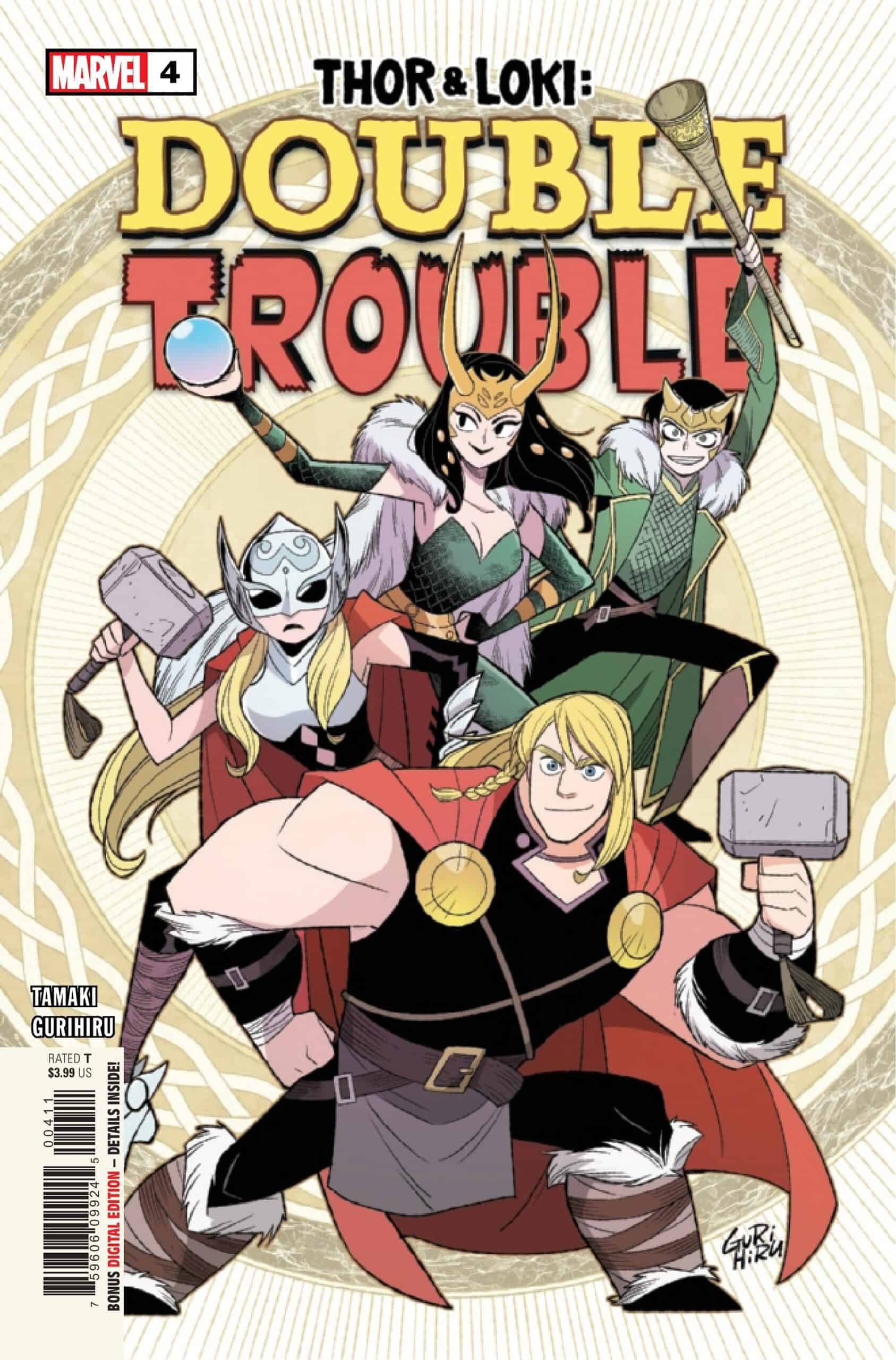 Using a magical sphere he stole from Odin’s vault, Loki accidentally opened a portal that hurtled him and Thor into a mysterious void. After landing in an alternate universe, they were attacked by trolls -- then rescued by Thor, Goddess of Thunder! Thor and Loki then realized that the orb, their ticket home, was missing. Little did they realize that the orb had fallen into the hands of this universe’s Loki!

As Thor and Loki’s adventure draws to a close, Thor and Loki: Double Trouble feels every bit as stylish and high-polish as it did when it first arrived. Gurihiru’s art is as highly finessed and effortlessly executed as always. While the cover might be crowded, it’s nonetheless friendly and engaging. With simplified, exaggerated, and often hilarious expressions and body language, Thor and Loki are always the focus of the panel. Additionally, strategic use of saturation and dynamic movements lead the eye seamlessly between panels ensuring young readers never get lost. Mariko Tamaki’s may not be deep, but her writing is energetic, quippy, and generally keeps the story at a lightning pace. Keeping the quantity of text low, the book remains friendly to young readers and places the brunt of its storytelling on Gurihiru’s dynamic visuals. 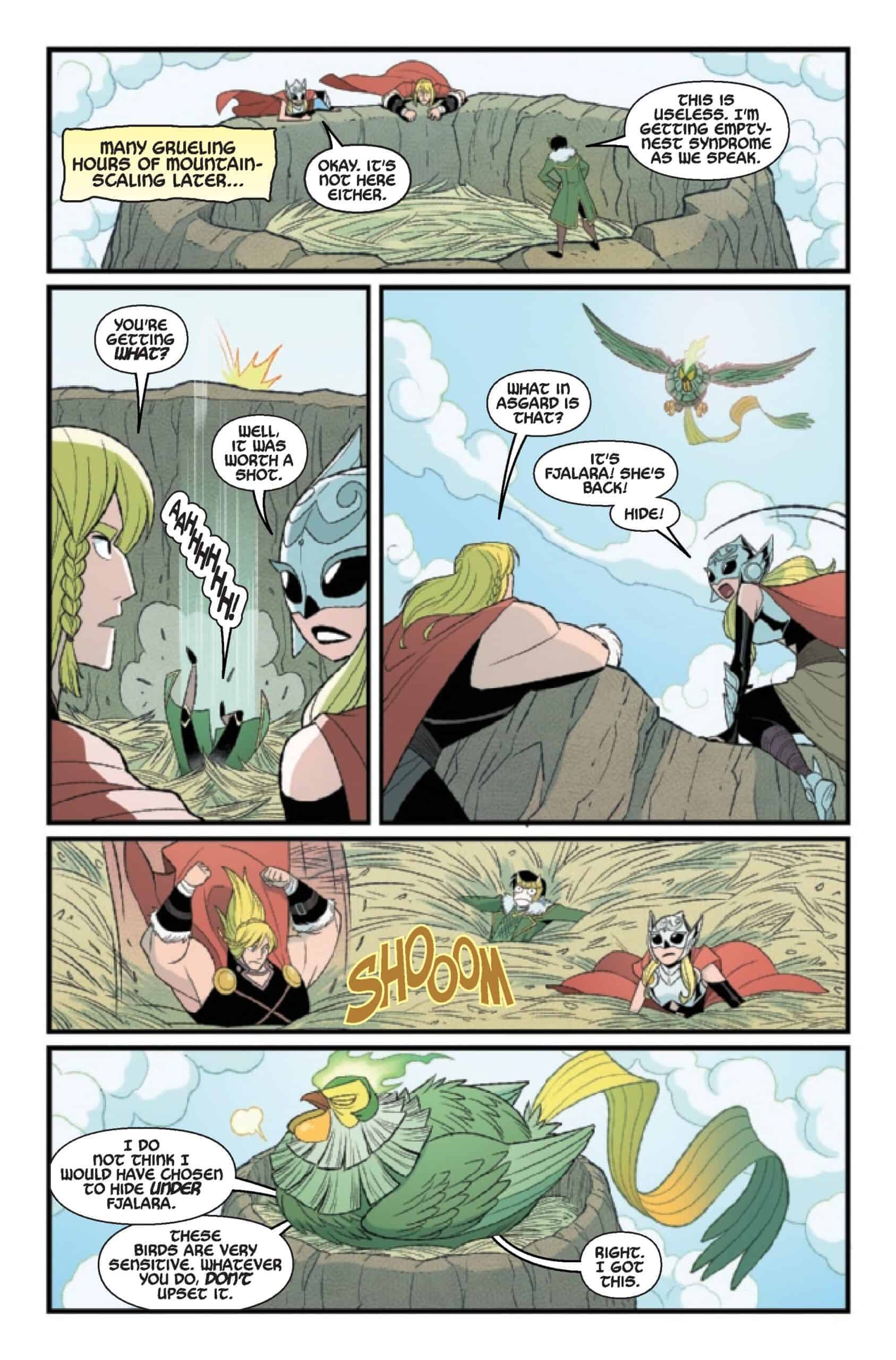 However, beneath the book’s slick artstyle and dialogue, it misses the mark on trans representation. The final issue sees Thor and Loki meet another Thor and Loki from another dimension. Thor and Loki of the main universe of this comic are both men, while the other dimension’s Thor and Loki are both women. However, this reinforces the idea of the gender binary for its readers, rather than depicting gender as a spectrum. Loki’s trans identity erased in the process. Showing Loki both a man and woman doesn’t require two Lokis, because Loki is genderfluid: Loki is both.

The book has no issue dropping the name of the giant mythological bird Fjalara, but makes no attempt to use a word like “genderfluid” or simply express Loki’s gender in a positive light. The division of Loki into Two Differently Gendered Lokis is furthered by the comic’s introduction, which refers to the second Loki as “Lady Loki.” Loki, as a woman, is just Loki. No qualifier needed. While the issue, like previous issues, shows off Loki’s shapeshifting, none of that shapeshifting is in relation to gender presentation — which it is throughout books like Loki: Agent of Asgard and Thor and Loki: The Tenth Realm. Gurihiru’s use of Olivier Coipel’s “Lady Loki” character design exacerbates the problem, wordlessly alluding to a transphobic storyline in which Loki stole Lady Sif’s body in order to manipulate others. 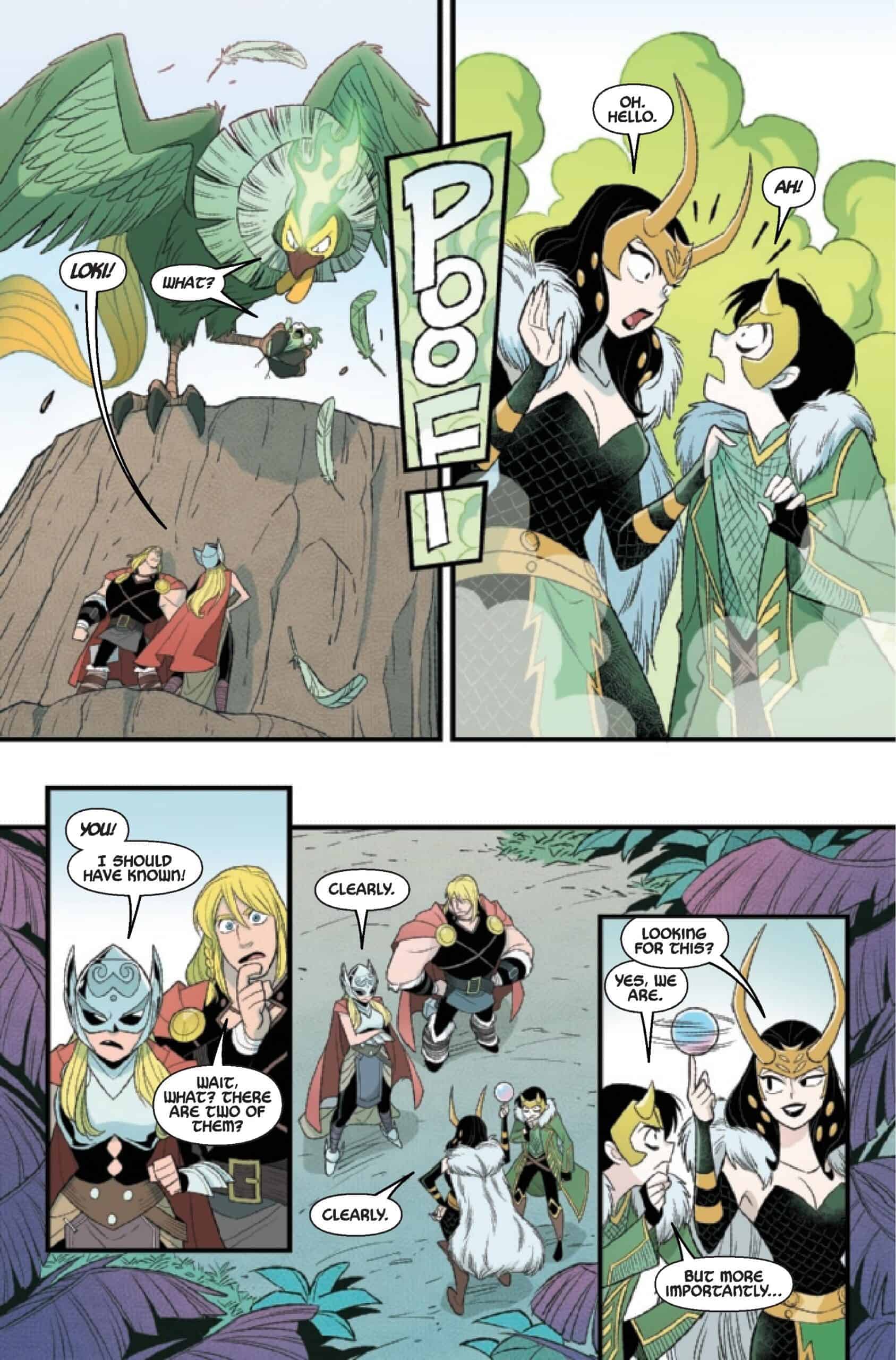 Tamaki has garnered substantial critical acclaim for queer-centric graphic novels and also curates a queer-focused graphic novel imprint. Outside of hiring a trans writer, she could have been one of the best people to introduce young readers to positive trans representation via Loki. Animated shows like She-Ra and the Princesses of Power and Craig of the Creek have shown the ability for children’s media to portray trans characters positively. (One She-Ra character is, ironically, a mischievous genderfluid shapeshifter named Double Trouble.) With their rights under attack, trans children more than ever deserve to see positive trans representation in the media they consume. Sadly, that isn’t what the readers of Thor and Loki: Double Trouble got. Hopefully, Marvel will offer more positive trans representation for kids in future.

If you’re interested in reading more on both positive and negative depictions of Marvel’s Loki & genderfluidity, I’ve written more in depth on the topic here and here.

Double Trouble #4 effortlessly sustains the energy and playfulness of previous issues. Disappointingly, its charm is undermined by a subtle but pervasive undercurrent of transphobia.