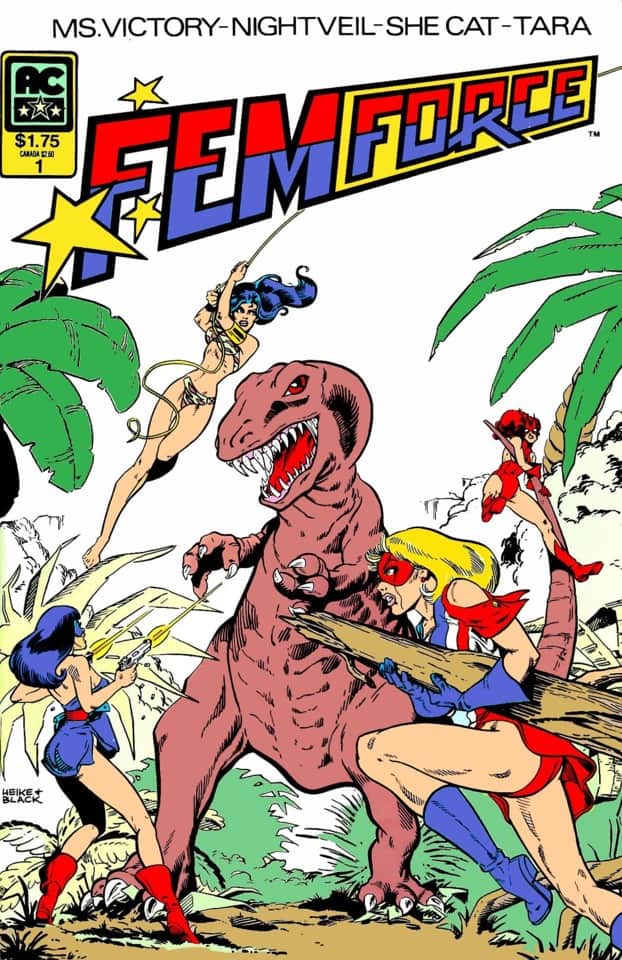 In 1985 FemForce was the first comic to have an all-female superpowered team. Written by Bill Black, his love for the series has continued from issue #1 to issue #197. The team comprises six bad-ass women, each very unique in their own right—Nightveil, She-Cat, Stardust, Synn, Tara, and their team leader Ms.Victory.

Ms. Victory is a hero from the 1940s that Bill Black revamped to establish this sensational team. These books are very Golden Age. AC Comics has embraced the idea of “if it’s not broken, don’t fix it.” A strong tortoise in the race, if you will. They are a small indie comic publishing company based out of Florida.

Their team and work have expanded over the years into classic horror comics, Silver Age comics, and the newest additions being Superbabes and 21st Centurions. Both series are what I like to call comeback comics. Books that embrace a comic age long forgotten. AC Comics is a long-lasting company that hopefully continues its phenomenal work.

For such a small publishing company, can you believe the first issue of Femforce is now worth $100? I have almost every issue of FemForce, and even I don’t have that one. The description for this issue per AC Comics website is:

“Trek For A Time Twister”, introduces Ms. Victory, She-cat, Nightveil, (who mystically reverts to her Golden Age persona of the Blue Bulleteer for this adventure) and Tara Fremont. The girls recruit new member Tara, and head down to South America to help out the niece of FF founding member Rio Rita. There, they encounter dinosaurs, primitive Amazons, and the villain known as Ripjaw, all while trying to return an experimental time-travel device.

Time travel was all the rage in science fiction back then, and AC Comics jumped right on that train giving sci-fi fans the love and nostalgia they’d been missing.

AC Comics is a prime example of why small indie publishers are loved. They are small, but you feel connected to a different time. Comics in the ’80s and ’90s were different and more raw than they are now.

Everything now is all-inclusive and divergent from the original stories of our favorite heroes. However the new mindblowing and universe-shattering stories, you just got to love the original stories. X-MEN in the ’90s, there was a level of drip that is not given in some of the issues today. While Cosmic Ghost Rider is my favorite Marvel hero, there are many heroes from the ’80s that you can not get any better. FemForce is in that category.

FemForce is a relic that is cherished always, and even though the adventures of FemForce continue, the first book in the series introduced us to them, and we were never the same after that. I highly recommend this throwback to everyone. This series will transport you to a different time, and the nostalgia you’ll feel when reading it is worth every penny.

As I said, FemForce is a relic and a beacon as a small-time publisher and is one of the best comic series I have ever read. So get this throwback and see for yourself. And for those of you who are interested in that first issue and can afford it. I am jealous!