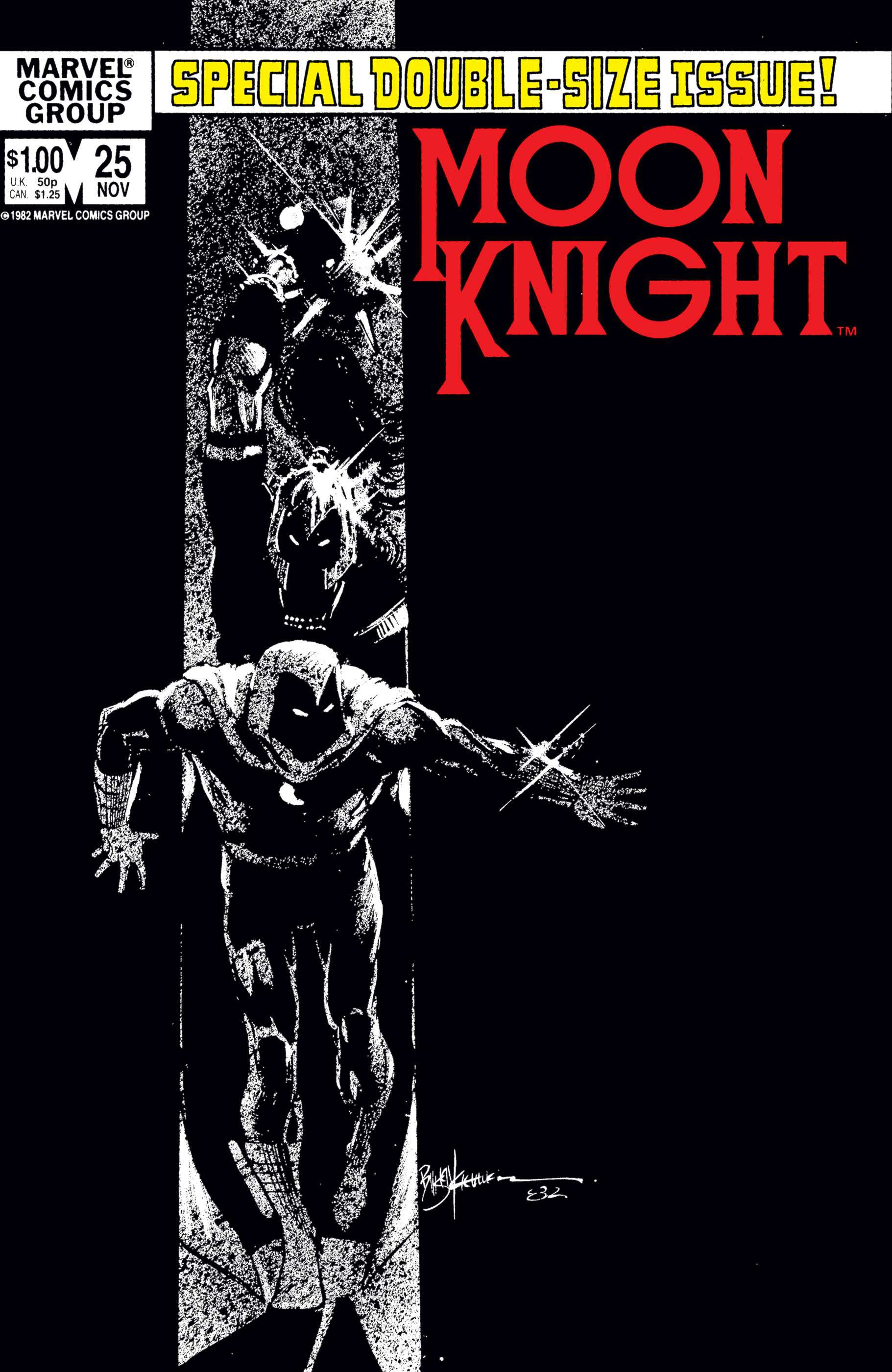 Since the internet does not think a Moon Knight story existed before 2012 (well and that one issue cut of Bushman's face)  let's go back all the way to 1982 to my favorite age of comics, the Bronze Age! In Moon Knight's first every series run with a delightful story by the incredible Doug Moench and always stunning artist Bill Sienkiewicz. In a special double-sized issue Moon Knight faces a new villain, a man that has come back to town from Vietnam to find himself down and out on his luck, until he decides to run for mayor and become the anti-Moon Knight the Black Spectre!

Moon Knight #25: The classic team of Moench and Sienkiewicz crafted an instant classic!

There is a lot to love in Doug Moench script in Moon Knight #25; he takes full advantage of the double sized issue to delve into this new character the Carson Knowles aka the Black Specter. Moench delves straight into the post-Vietnam war veteran down on his luck. Using the first few pages to develop his characters through several years. Moench does a fantastic job of  letting this character breathe a little bit, before becoming a villain. Moench also deals a lot with political issues of the time, from voter suppression to the obvious war controversy from the villain. Knowles decides to follow in his dads footsteps and run for political office, but also decides to beat the corrupts current mayor and to win he must also become corrupt and become an anti-Moon Knight in the Black Spectre and that is when Moon Knight #25 goes off the rails.

What I love about the Bronze Age of Comics is that a lot of the times they feel very dark and adult oriented like the black Spectre straight up murders somebody and hangs them in this issue, but they are still holding on to that goofy stuff from the past, it is stuck in between those two eras and I love it. For instance Mr. Knowles becomes the “anti-Moon Knight” which in his mind is the “Black Spectre” which does not seem like and anti-moon knight name and then somehow comes up with a black knights costume with a sword and mace to boot. Much less that Mr. Knowles is a soldier but somehow knows how to fight with these weapons. A trope in this era happens to as the Black Spectre gets the best of Moon Knight in their first fight and like Knowles was a a soldier but that was like 4-5 years from when this story takes place and I mean I don’t know if his limited judo/karate training should be able to take out Moon Knight, especially in 4 issues from now Moon Knight goes toe to toe with a werewolf. He also hires three random “thugs” to be his “ghosts”, but he doesn’t bother to give them costumes or anything, they are just down for whatever I guess.

Moench does bring a full story as we get some love conflict between Marc Spector and Marlene and we get a little struggle with Marcs dissociative identity disorder. We also get some interesting Khonshu tid bits, which Moench does some fun stuff in this run about Khonshu. I think Moench does a good job of touching Marcs disorder for the time, but not solely letting it drive the story. He does that a lot through the series having it as an integral part but not fully driving the story for a lot of the run, which does bug me some about the show and some more recent runs as it is the main thing, but there is so much more to the character than his mental illness. The action is a bit lacking and the story does wrap up pretty quickly for all the pages we are given. But there is a wonderful back- up article with Bill Sienkiewicz discussing different covers he did for Moon Knight. 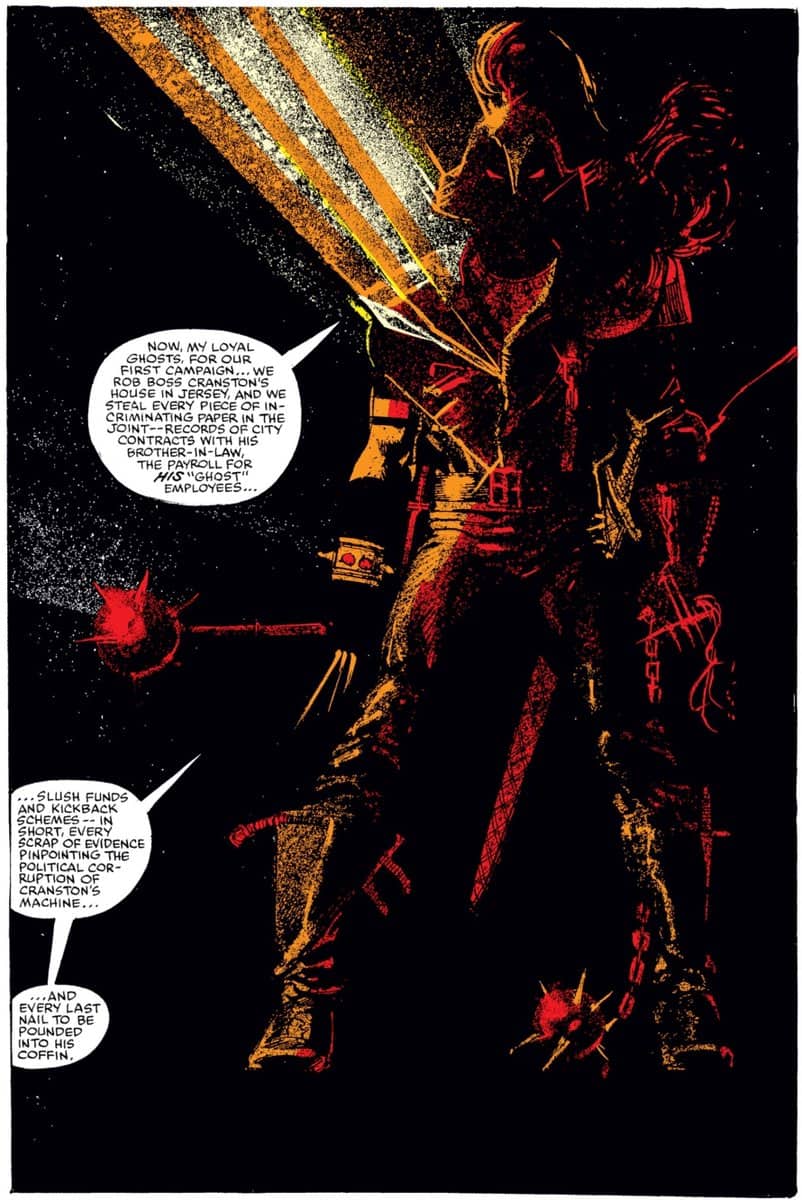 The artwork in Moon Knight #25 is well worth a gander Bill Sienkiewicz is a living legend and he puts on a show for the readers in this issue. His work is wonderfully textured and some impeccable detail throughout the issue. His characters are wonderfully rendered and his more realistic style fits perfectly well for this political intrigue of a story.

Bill Sienkiewicz art is probably the main reason I got into Moon Knight originally before I knew anything about him. I mean take any of his covers from the original run (really all the covers from the original run are great) there is not a miss in the bunch. You can’t look at those and not want to pick up the book! The thing about Bill Sienkiewicz is his art doesn’t diminish from his cover work to his sequential work, what you get on the cover is what you get inside as well. That dark moodiness is in full affect in Moon Knight #25.

We have to talk about some superb coloring work by Christie Scheele. That dark, texture, gritty look is all pulled together by Scheele. It is tremendously down and works perfectly with Sienkiewicz’s art style. The first reveal of the black specters costume is a beautiful piece of artwork. Concealed somewhat in the shadows the touches of red, yellow, and orange with a silhouette of illumination has a wonderful eerie effect.

Looking back at Moon Knights original run and issue #25 is a pretty solid storu, it has all the staples you want and a little bit of political intrigue as well. I am a fan of the bronze age of comic writing style it has an overall serious tone, but very silly at the same time. Great artwork and honestly couldn't ask for anything better than what is delivered on the pages. Hopefully the Moon Knight tv show will have so people going a little further back into the archives to pull out some of these Moon Knight gems!