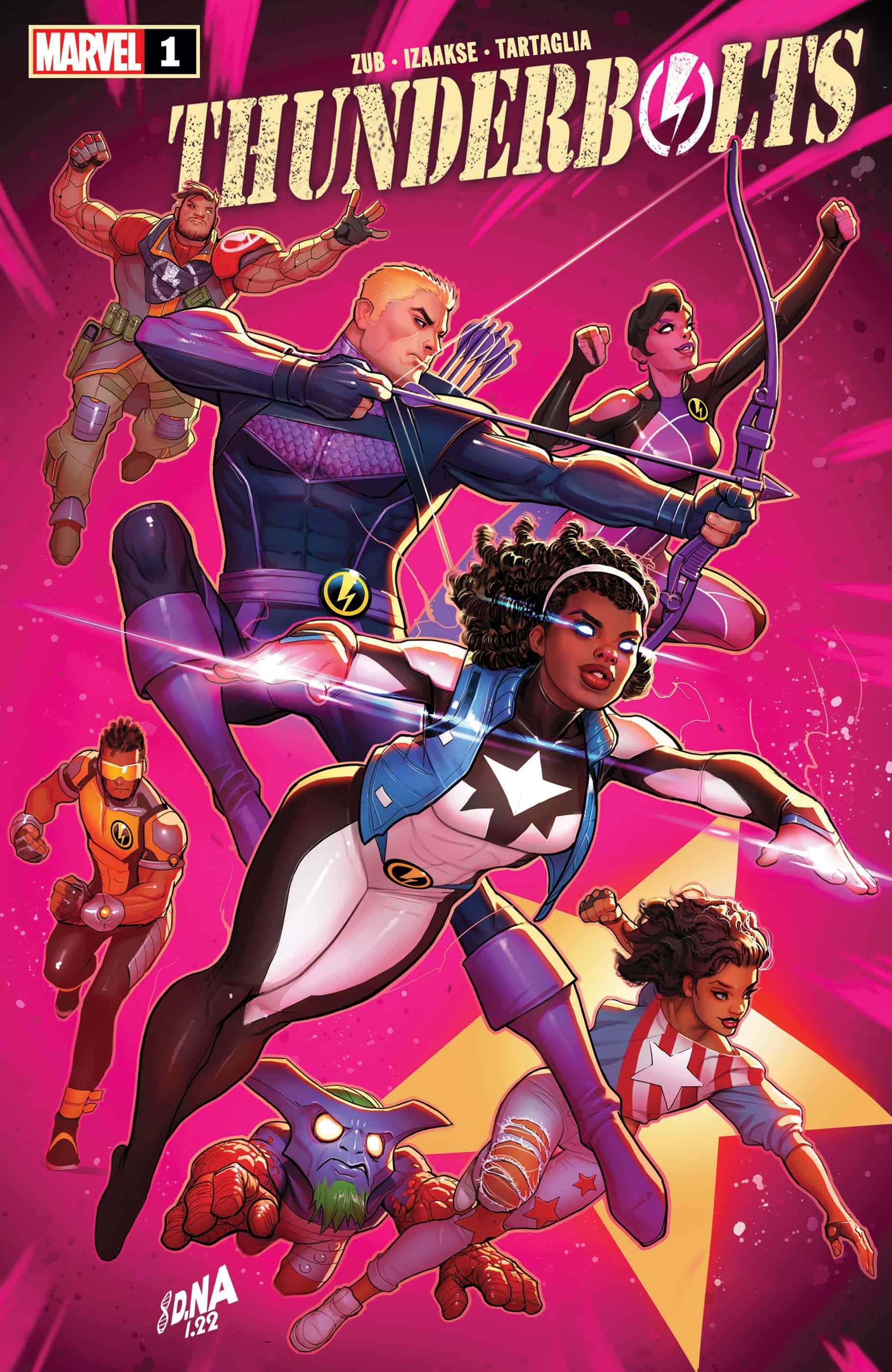 The Thunderbolts are back! Under the auspices of Mayor Luke Cage's watchful eye, the they're out to rebuild public trust in the team's name after it was abused and dragged through the mud by Wilson Fisk's goon squad. Can they succeed? In the words of America Chavez... 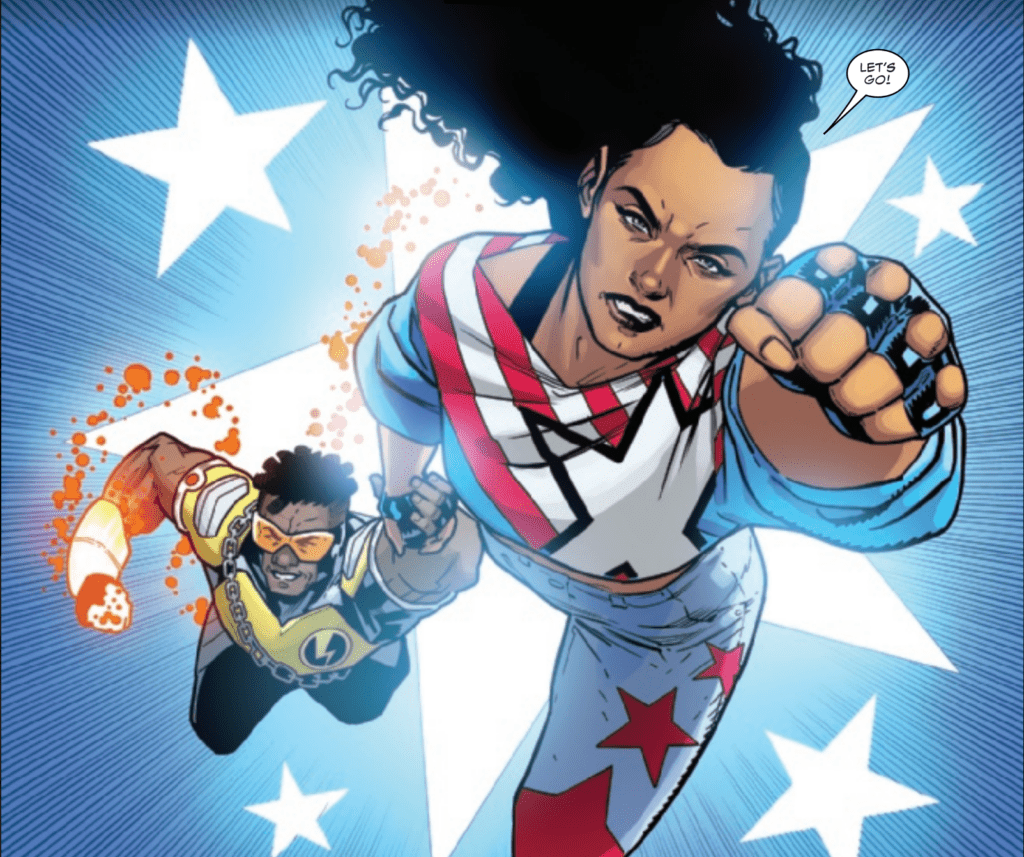 The Thunderbolts are back!

A quarter-century after their debut (!), and Marvel’s putting the band back together. Well, not the band, but another team under the T-Bolts banner ready guns-a-blazing to give ne’er-do-wells the swift kick in the butt they deserve.

The Thunderbolts have always been a fluid team, more based around concept than members. Initially it was about criminals disguised as heroes, then reformed villains trying to make good became their raison d’etre. Now, it’s the name of “Thunderbolts” itself that needs redemption: after all, it was dragged through the mud in Devil’s Reign when Mayor Wilson Fisk let loose a group of outright criminals to round up the rogue heroes disobeying NYC’s new anti-vigilante law. The Rhino, Doctor Octopus, Taskmaster, and many more became the face of the T-Bolts… which didn’t bode well for the brand, insofar as public perception was concerned.

And branding is what it’s all about in this new Thunderbolts #1. Now that Luke Cage is mayor of the Big Apple, he’s on a mission to redeem the Thunderbolts’ good name – and he has a slick ad agency using top-of-the-line algorithms to build the most publicity-friendly team imaginable. Hawkeye, the new Power Man (yay, Al Ewing and I aren’t the only ones who remember him!), one of the Purple Man’s illegitimate children Persuasion, America Chavez, and a new man of mystery named (wait for it) Gutsen Glory (hey, mystery men poll well with the public, apparently), round out the team; Monica Rambeau shows up late in the game as an unofficial member/x-factor. Writer Jim Zub handles the team of disparate personalities like a pro; they at once feel like they’ve never worked together before yet also have known one another their whole lives.

Zub had a similar task with the late, lamented Black Panther and the Agents of Wakanda title, which for whatever reason didn’t catch on. Let’s hope he fares better with this bunch of coloring-outside-the-lines characters, because his take on the Thunderbolts absolutely deserves to be more than a miniseries. This comic is fun, but has enough layers of nuance and intrigue on top of it to push it to the next level and make the reader yearn for the next issue now. Whether you’ve read a Thunderbolts comic before or this is your first time, you’re in for a real treat.

Sean Izaakse and Java Tartaglia handle the art, and boy, is it pretty. Izaakse has been a rising star for awhile now; his style, evocative of Daredevil-era Michael Lark with a smidgen of cartoony vibes thrown on top (see: the laugh-out-loud funny scene of Abomination’s defeat), fits great with Tartaglia’s cool tones that pop off the page. The pair clearly work well together, and Izaakse’s eye for detail in the emotion in human motion is keenly worth noting. This is a skill not all artists have – their characters pose, or just stand there; Izaakse’s wear their emotions on their sleeves and readers can’t miss what’s being shown. My only niggle with the art is the cover – David Nakayama is a great artist (he’s all over the place these days), but I can’t help but feel this effort isn’t his best. All but two of the characters are looking in different directions, giving the piece a slapped-together feel, and his coloring makes them look like they’re made of plastic. The colors pop, though, in a way that definitely will grab casual buyers’ attention. It’s a good cover, but lacks the components to be great.

All in all – this comic is an extremely pleasant surprise. New comics that use crossovers or event comics as their springboard don’t always fare well in the long run due to their roots in other stories. This latest iteration of Thunderbolts, though, potentially has what it takes to go the distance. Let’s hope Marvel listens and keeps it marching on.

The Thunderbolts are back, and you'll be sad if you pass on this latest iteration. Don't be that person!