Tiger Division #1: Ghosts of the Past 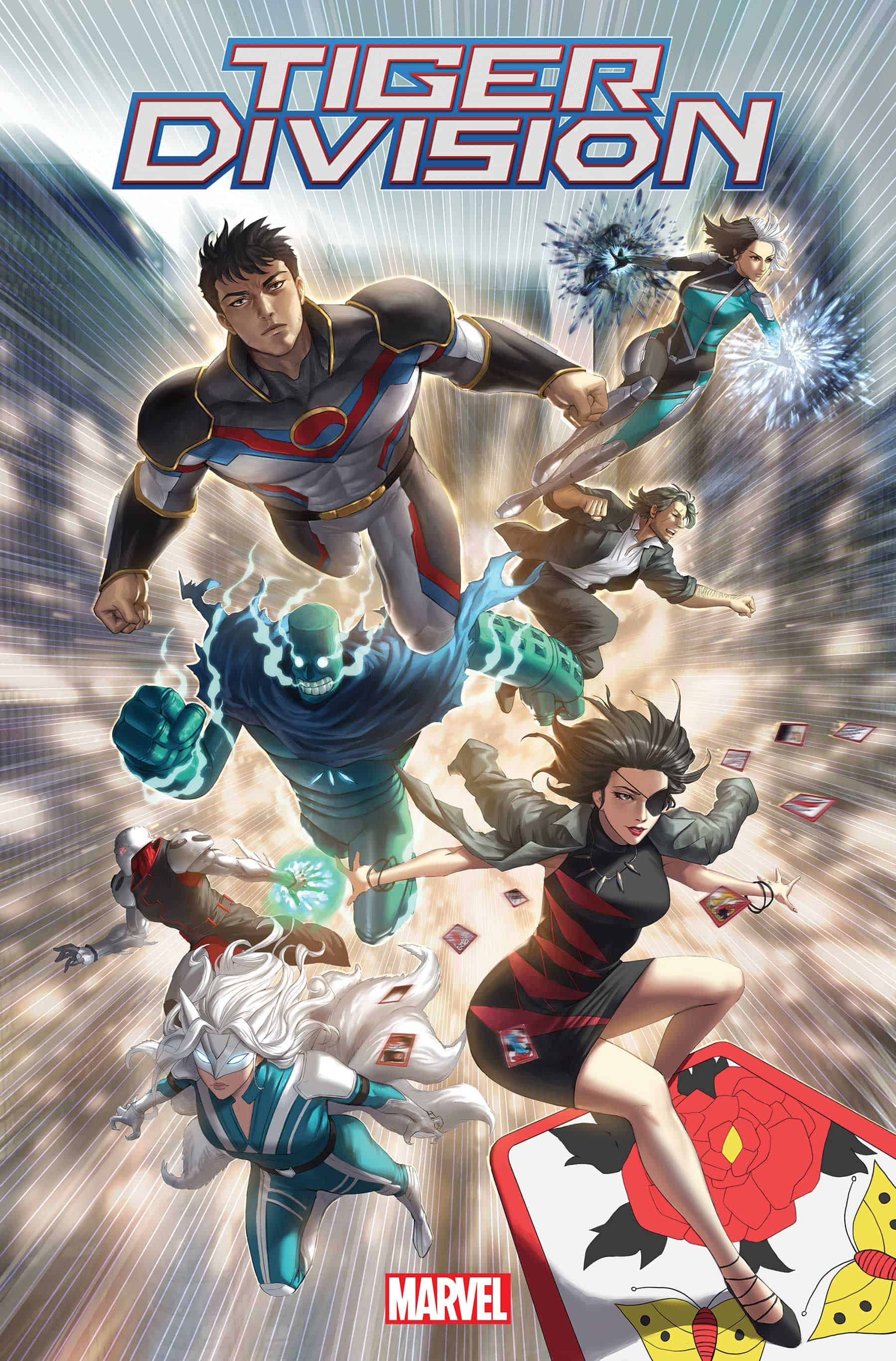 When South Korea needed defending, the National Intelligence Service, led by Director Ami Han, A.K.A. White Fox, assembled a team of superpowered individuals: Taegukgi, the powerhouse who packs a punch; Lady Bright, a card-wielding sorcerer; Mr. Enigma, a street-brawling demigod; the General, a living totem; Gun-R II, a fast-talking robot; and Luna Snow, a cryokinetic pop star. Together, they are…

Superhero fans can be a fickle breed, scarcely straying from the comfort zone of characters that they’ve known and loved for years. And with Marvel’s weekly releases consistently brimming with the never-ending adventures of Spider-Man, X-Men and Avengers, readers have little motivation to take a chance on anything new. It is safe to say that creative team of Tiger Division has their work cut out for them, and they seem conscious of this challenge in their attempt to make a solid first impression.

Perhaps the biggest advantage at their disposal is the unique choice of setting, whisking readers away from the familiar sights of New York City to Seoul, South Korea. It’s a refreshing change of pace to see another grounded, real-world city portrayed with the same sense of adventurous grandeur that the Big Apple has always received. Artist Creees Lee pencils lively environments and expressive figures, and colorist Yen Nitro bathes every exterior scene in warm yellow sunlight that gives the environment a welcoming feeling.

As someone who missed the introduction of these characters within the pages of Jed Mackay’s Taskmaster, I never once felt as if I was missing some important context. Writer Emily Kim does a stellar job of dropping you right into the action without losing you, being incredibly resourceful with expository dialogue and text boxes to give the entire cast just enough to clue you into their personalities and relationships. You’ll find it helpful that the character dynamics are quite easy to decipher, perhaps too easy, to the point where it becomes the issue’s only fault. 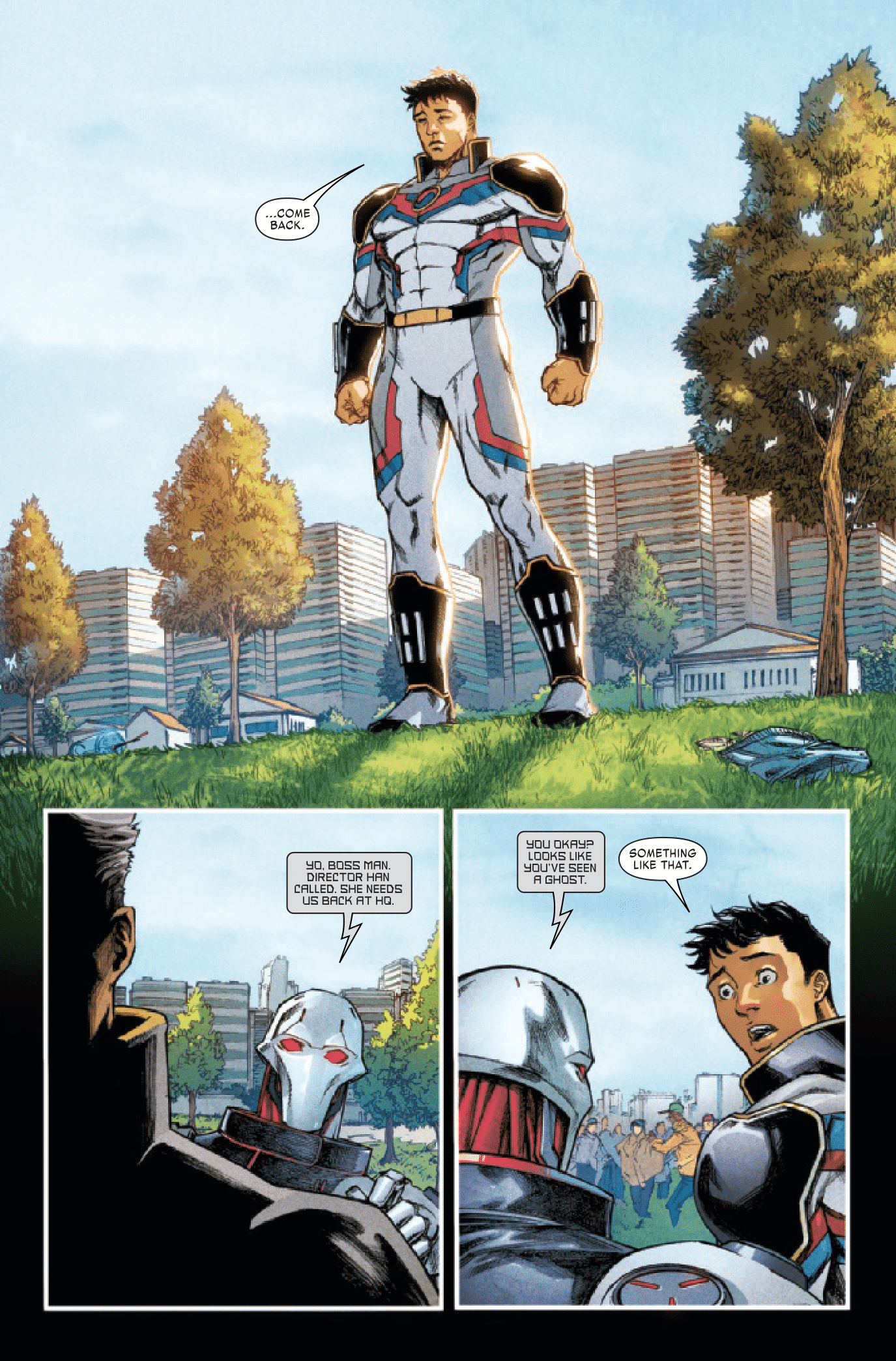 The narrative and character writing are straight-forward and simplistic, making it an easily digestible read for newcomers while also depriving the comic of any real point of intrigue. The objective is a tried and true cliché, starting with a standard civilian rescue mission that evolves into a quest for a magical macguffin. The squad itself consists of the typical archetypes, a variety of nonchalant super-powered beings who quip in the face of danger. The comedy tends to be more misses than hits, with many of the heroes’ snarky remarks coming off as recycled and predictable, the kind of exchanges that you’ve most certainly heard pop up in a sitcom before. It’s certainly a comic thinking safely within the box, but the execution and art are solid enough to compensate for the trope-heavy set-up.

The true strength of Tiger Division #1 is its willingness to embrace and weave culture and history into its narrative. Taegukgi, the team’s leader, is haunted by ghosts from his past, and is forced to confront the tragedy of his backstory in a poignant flashback to the Korean war. I sincerely hope that Tiger Division follows suit with the rest of its ensemble, exploring the way in which Korea’s history and culture molded them into the current heroes we see them as, as this framework would do much to set the comic apart.

Tiger Division #1 takes on the monumental task of establishing not just one, but an entire team of relatively new characters within the Marvel universe. With a somewhat standard yet well-executed narrative, it succeeds in fleshing out its characters and setting them up for a larger, more interesting plot.

Tiger Division #1: Ghosts of the Past