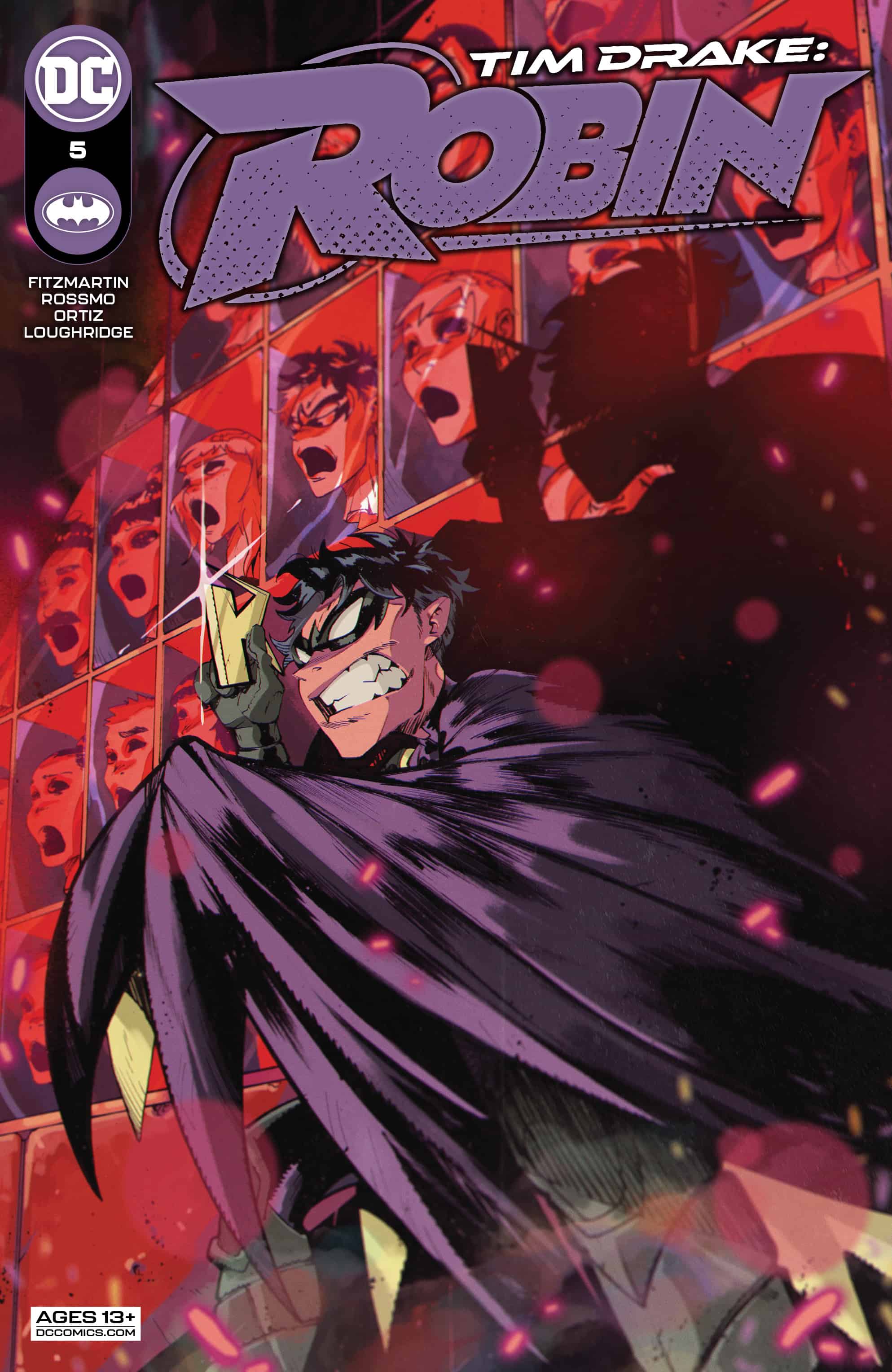 Tim's mysterious new admirer/nemesis is closing in and they could be anyone. With everyone he trusts potentially compromised or in danger, the World's Greatest Robin has no one and nowhere left to turn for help...except for himself. But can Tim Drake get out of his own way for long enough to catch up to a villain who seemingly knows everything about Tim, down to the very way he thinks?

Tim Drake: Robin #5 starts with Tim searching for his boyfriend Bernard, who has gone missing. He calls for the assistance of Nightwing, Batwoman, and Sparrow in his frantic search while doubting if he’s really ready to go out on his own. When he finally finds Bernard tied up at the docks, he is overtaken to see the real mastermind behind all the trouble he’s been facing…

Admittedly, this is the first dedicated/solo Tim Drake story that I’ve read. I’ve only had a few experiences with the character, most of it being from either popular media (such as Batman: Arkham Knight and Gotham Knights video games) or from him being a side character in other stories, such as Batman: The Court Of Owls run from Snyder, Capullo, and Glapion. And it’s always hard to judge an issue when it’s in the middle of a run and you haven’t read the previous issues to know what’s been leading up to the current moment in the story.

Overall, I have mixed feelings about this issue. 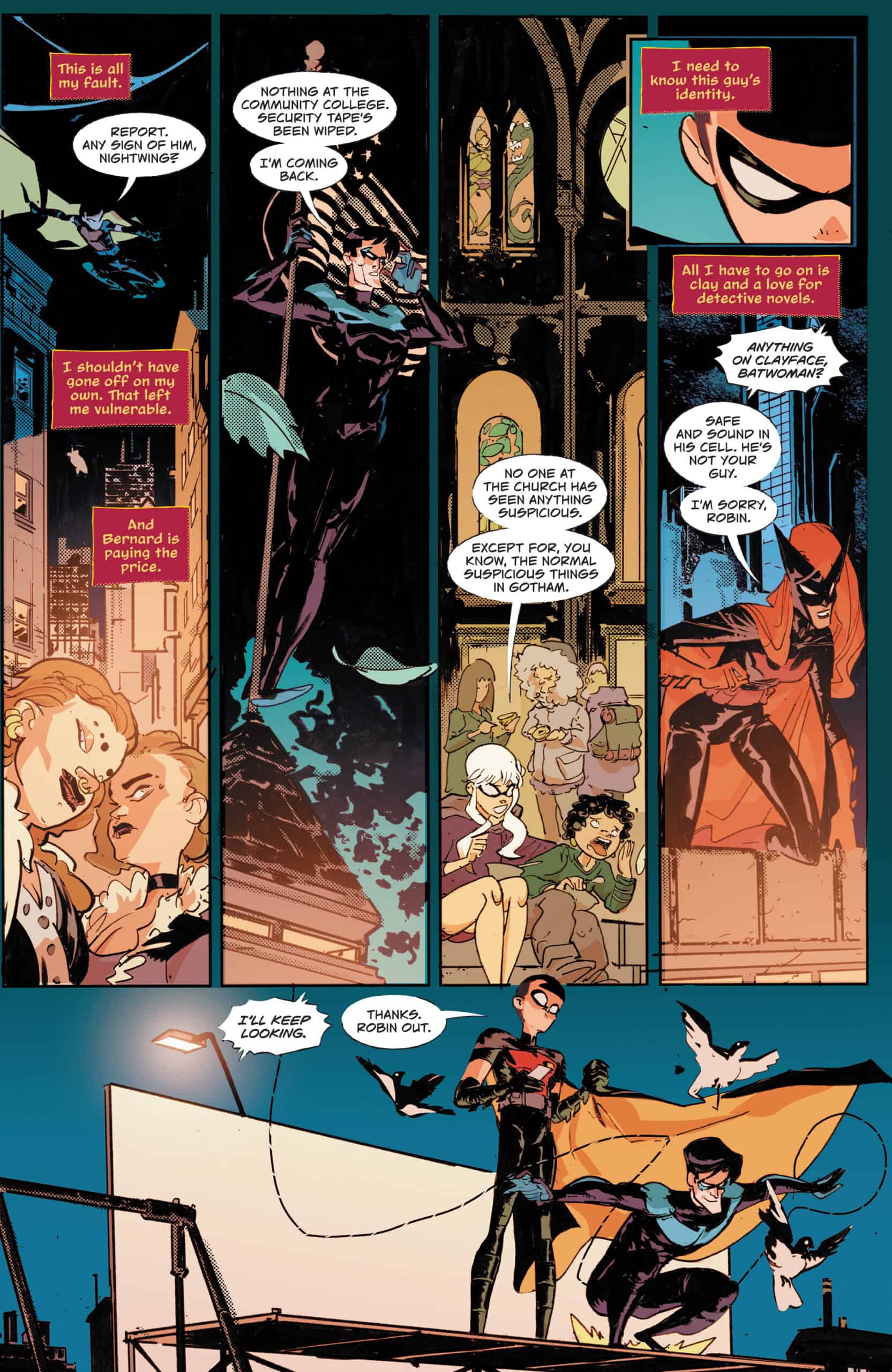 The story itself is very intriguing. Fitzmartin does a good job telling the story from Drake’s point of view, and I absolutely love how the callbacks were written to help show Tim using his detective skills to reassess the clues he picked up or missed in his memory in order to solve the mystery. The story itself is written to serve as the villain reveal by the end of the issue, and it was done very well.

I personally struggled with the art here by Rossmo, who did pages 1-5 and 22. Everyone has their own preference when it comes to artistic style and I know that this style may connect with a lot of people. But for me, I was too distracted by so many of the straight and sharp lines in the art to enjoy what was going on. People’s jawlines were very boxed and looked not as natural; Tim’s hair had an odd, flat look to it; and in a few panels, Tim’s cape was drawn with so many straight, sharp lines that it didn’t look like a cape flapping in the wind to me. The art itself isn’t bad or unbearable; there were just a few stylistic choices that made it hard for me to enjoy that didn’t connect with me. I found myself connecting with the art from Ortiz a lot more as I found it to be more appealing to me with the presentation of characters and composition. But again, art has more to do with personal preferences, and Rossmo’s skills as an artist here should still be appreciated for how he helped presented the story in this issue. 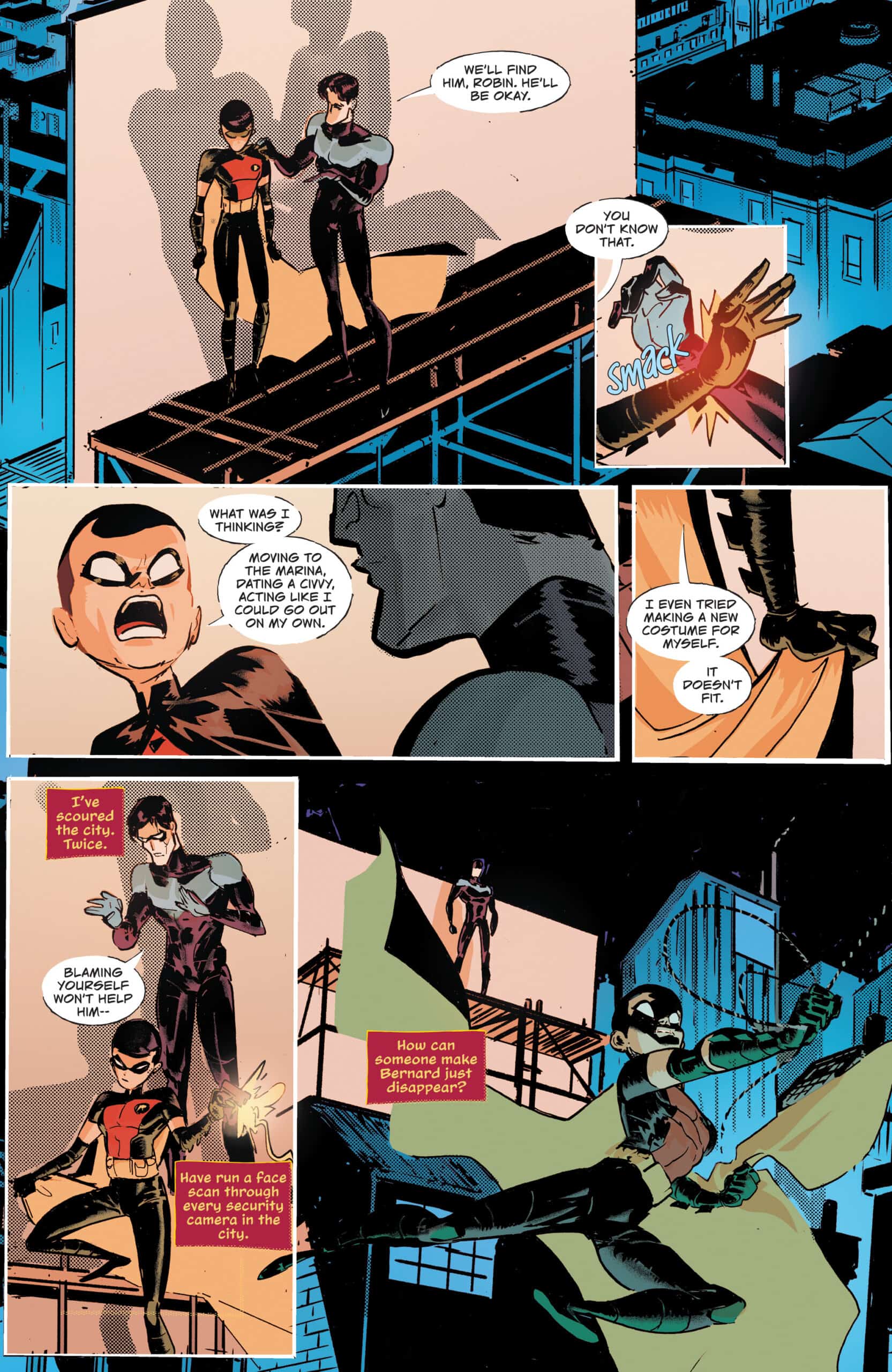 I thought the colors by Loughridge were fantastic here. Much of it was very flat which was highlighted by the shading that made it look really spectacular and helped the viewer with the sense of lighting and visual highlights. The coloring of the background was usually dominated by a single color palette that can sometimes make it dull but with Loughridge, he made it seem very natural and quietly supporting the story which may go unnoticed for the casual reader but should be appreciated here. 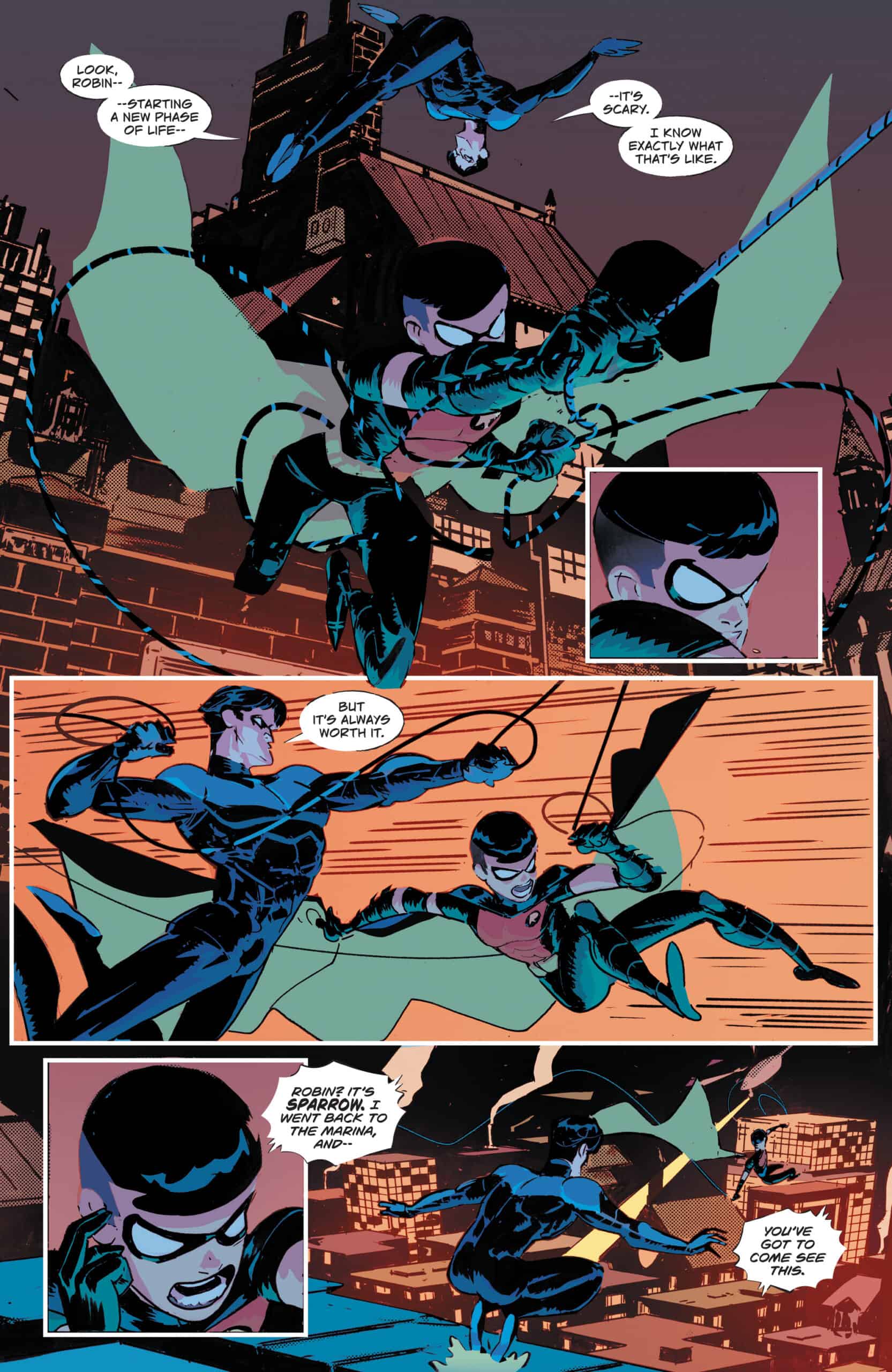 One final detail about the story that did throw me off a little was the dialogue boxes for the antagonist, James, when he’s speaking to Tim as he is escaping from being captured. While James is speaking to him, Tim is getting out of being tied up, taking down the henchmen, and running to various parts of the dock to try to get away and to get an advantage on James. While this is happening, there are dialogue boxes that are popping up on each panel but it was unclear to me how this was being communicated to Robin. There were moments during that dialogue where James is nowhere close to him so I wasn’t sure how this was happening.

Aside from my own personal artistic tastes and a point of confusion, I thought this was a good story. It's nice to see a superhero sidekick not only get their own story, but also their own personal archnemesis. I'm excited to see where this story will lead for Tim and Bernard, and if Tim decides to go out on his own.