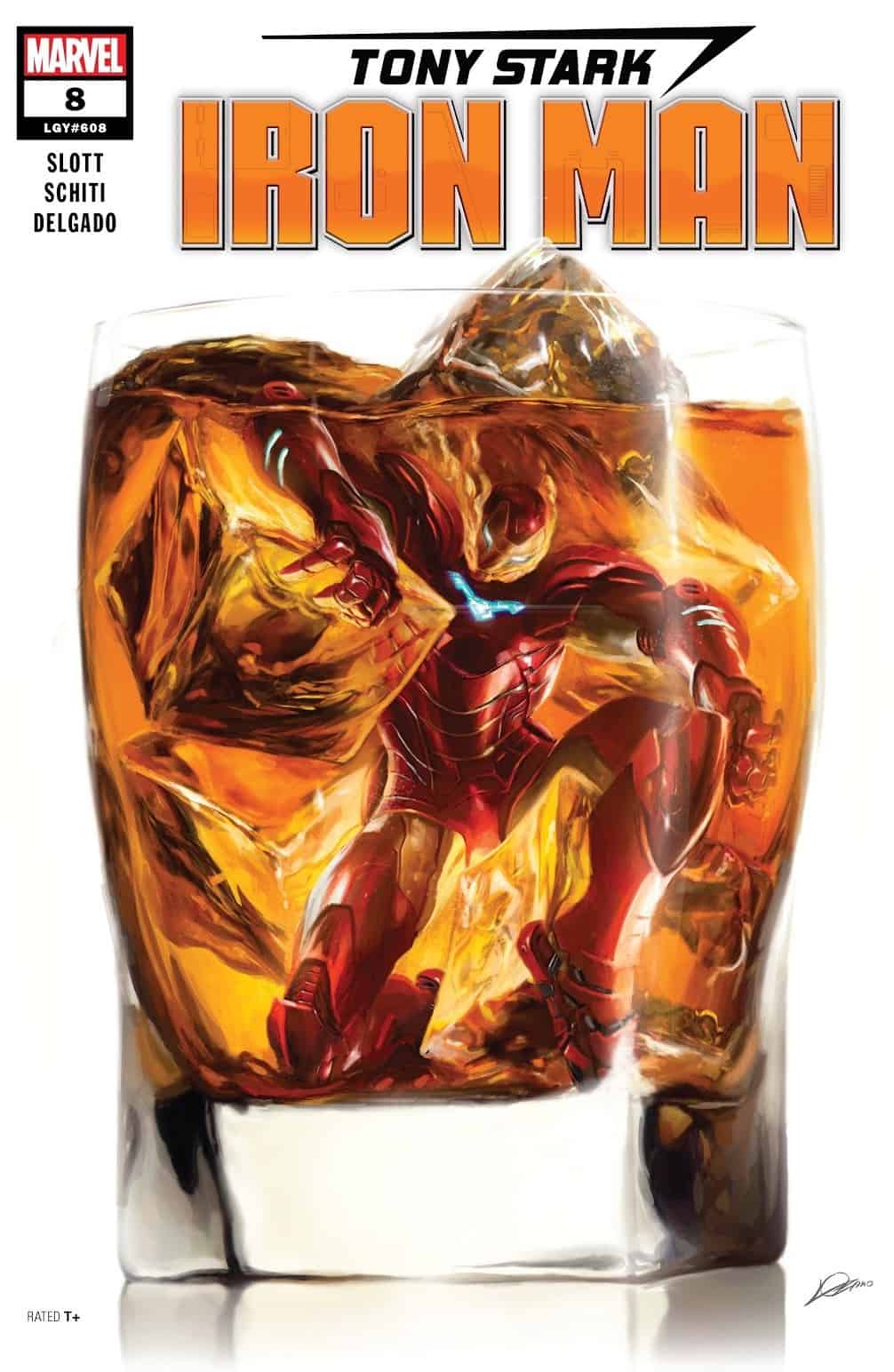 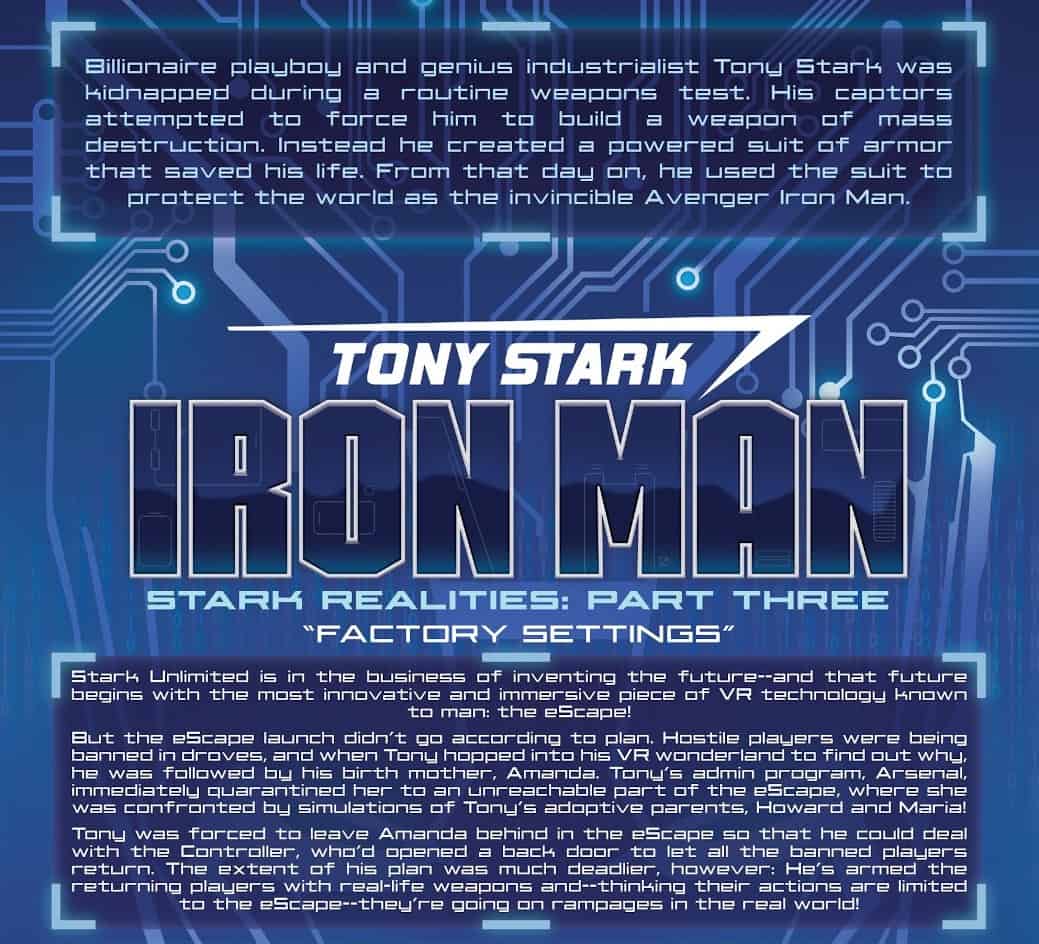 First, I have to give props to the cover artist, Alexander Lozano. Iron Man submerged in whiskey on the rocks?! It takes me back to Iron Man #128, Vol. 1: “Demon in a Bottle” by David Michelinie and Bob Layton. The cover concept is very Tony Stark with artwork skills showing off Lozano’s great talent. The colors are perfect!

This second volume to Tony Stark Iron Man seems to be at its peak with Stark Realities: Part Three. It remains quite awesome in this issue “Factory Settings”, as Dan Slott continues to mix modern day science fiction to the reality of gamers. Stark Unlimited seems to be cohesively in search for a way to reset the eScape, but there is a threat that hinders Team Iron Man working together as a whole unit. Will the Controller succeed through his deadly virus or will the mole be found and perform a clean install of the operating system before it is too late?

The world is in chaos! The eScape virtual reality gaming program has become quite popular across the globe. The Controller is manipulating players by believing they are in a video game and controlling their minds as they use real weaponry to attack and kill real people!

Law enforcement officers are distraught, but doing everything that they can to contain the situation as the media seeks answers to important questions. 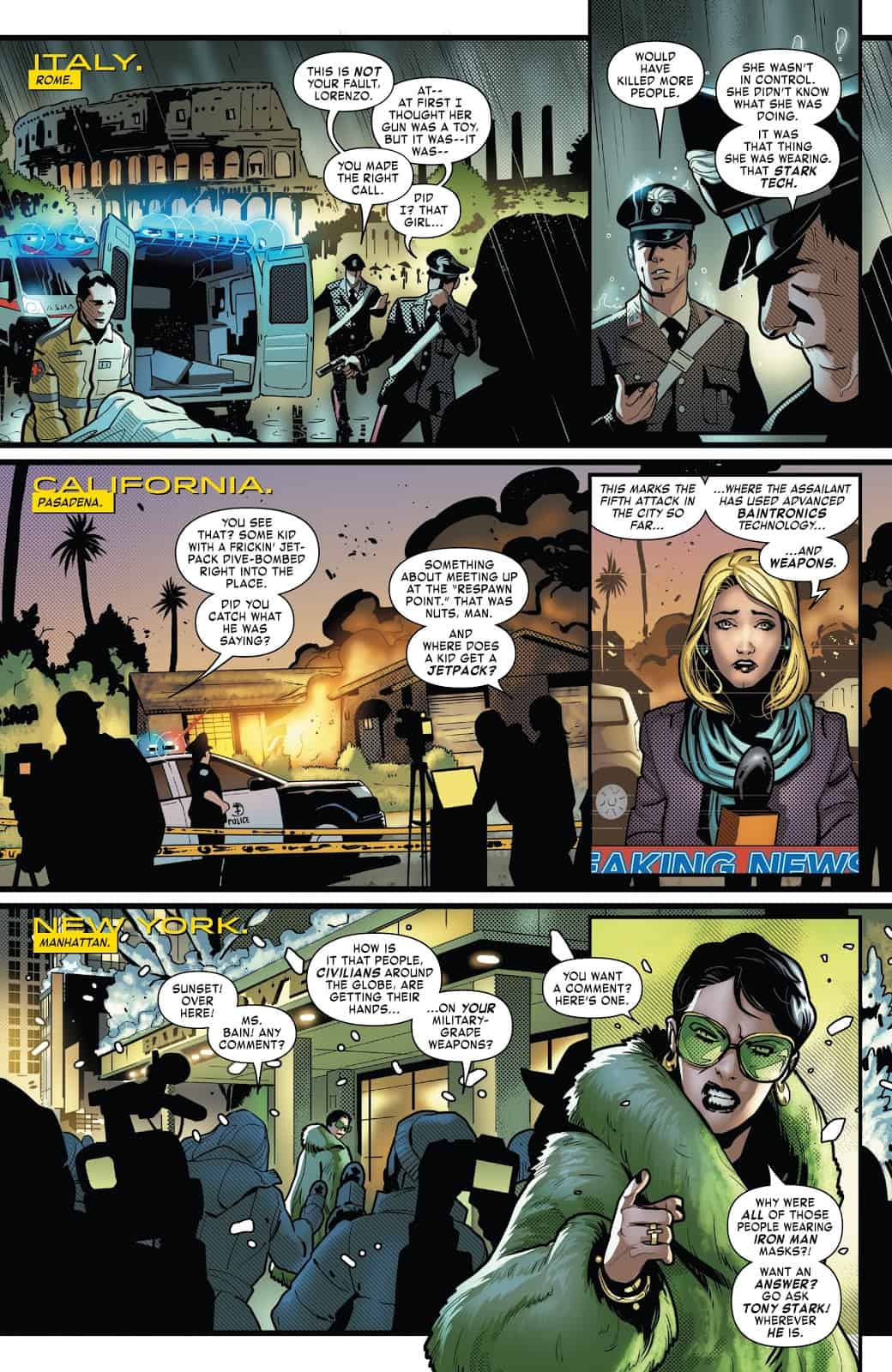 Heroes from other nations scramble to stop the fierce destructive attacks without killing the confused driven gamer. Meanwhile, Iron Man, the Wasp, and Rhodey take on the Controller directly. The Controller has been absorbing energy from all the players he has been manipulating, turning him into a huge monster-like man. Our heroes do their best in battle, but learn there has been a death in the family. Motherboard absorbs Tony’s mind, bringing him into the secret room where Amanda is being held captive.

Meanwhile, Andy realizes that there must be tech inside each of the eScape mask placed by the Controller. Andy thinks he can find a way to block that signal and free all the players. Unknowingly, Andy describes this plan to head of security, Bethany, who is already under the influence of the Controller. She does what anyone in her position would, knocks him out! Elsewhere, the Machine Man has agreed to help Jocasta and found a way back into each of the eScape mask to try and resolve the crisis from within the system.

Whew, there’s a lot going on in this magnificent issue. Dan Slott’s writing techniques keeps multiple plot lines interesting as they often overlap the main storyline. The dialogue is quite humorous at moments that only engage a nice pace to this story. There are many twists and turns that keeps storyline fun and interesting for the reader.

Valerio Schiti’s art is fantastic with the awesome action scenes and dynamic on the details on each character. I really love how Schiti switches from modern to classic settings within eScape. Edgar Delgdo’s colors are spectacular, especially the page when Motherboard took Tony back into eScape.

Tony Stark Iron Man #8 is a game changer. Bottoms Up!