The Constructicons are alone on a far off moon, mining while all the other Transformers are back on Cybertron. Today, they learn they are not alone.

Tyler Bleszinski writes another chapter in the stunning origin of the Constructicons. I’m willing to put money down that nobody put much thought into how and why certain Transformers were made. That is, until now. Why wouldn’t there be robots who constructed buildings, factories and more? It only makes sense, doesn’t it? I just wonder why they’re stuck on a far off planet mining for Energon when they should be back on Cybertron maintaining and constructing new buildings, after all, we know that there have been many wars, and there must be a lot of things that need repair. Lucky for us and unlucky for them, some fan favorite Transformers are also stuck of that remote planet, waiting for the opportunity to get back to Cybertron and cause havoc against the Transformers who have exiled them to that planet. We also get a slice of their origin, and while it mirrors the Constructicons origins in some parts, it’s another logical backstory of how and why these Transformers came to be.

This story boils down to the basic man vs. man story or in this case robot vs. robot. We’re being told the story of 5 parts of a whole vs. 3 individual parts and while you think you’d know who would come out on top, you might be surprised. I haven’t really read a Transformers story this deep before. Bleszinski really delves into the psyche of these ‘bots, and it’s a really interesting look filled with many more dark places than you’d think there would be in a comic based on toys. This backs up my claim that licensed comics have way more going for them than most people give them credit for. 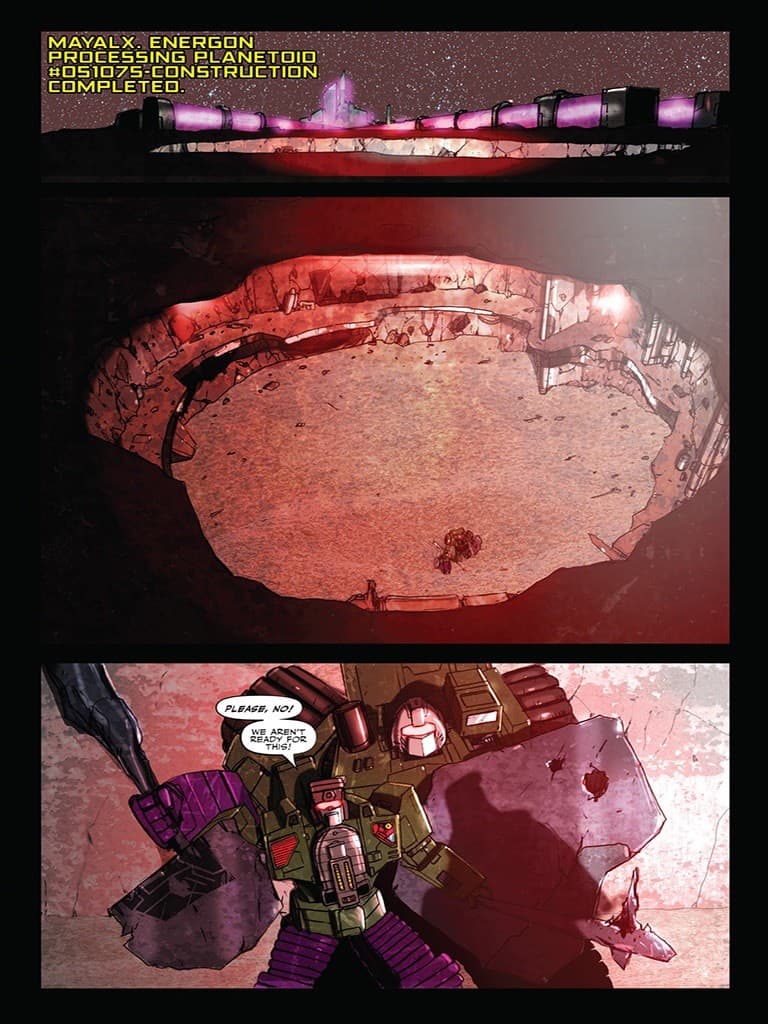 Speaking of credit, artist Livio Ramondelli turns in some of the coolest Transformers art that I’ve seen in a while. As much as I like books about robots that transform, their prone to feature a lot of straight lines and then can get boring after a while. Ramondelli does a fantastic job, and somehow manages to make this book moody!! That’s something I’ve never felt in a TF comic before. It’s almost got a thriller/suspense vibe with a lot going on in the shadows, heavy shading and the use he makes of blank space.

I don’t want to forget to briefly touch on Ramondellis’ work on the coloring of this book. He, as much as Bleszinski, makes this book as good as it is. Again, I have to go back to the mood of the book and that wouldn’t be possible without Ramondelli colors.

You're gonna want to pick this one up. It's rare that a Transformers comic goes this deep, and after reading this I wish more of them would try to. If you didn't pick up the first issue, you should pick that up as well. Don't be the guy or gal that everyone points and laughs at for missing a good comic.