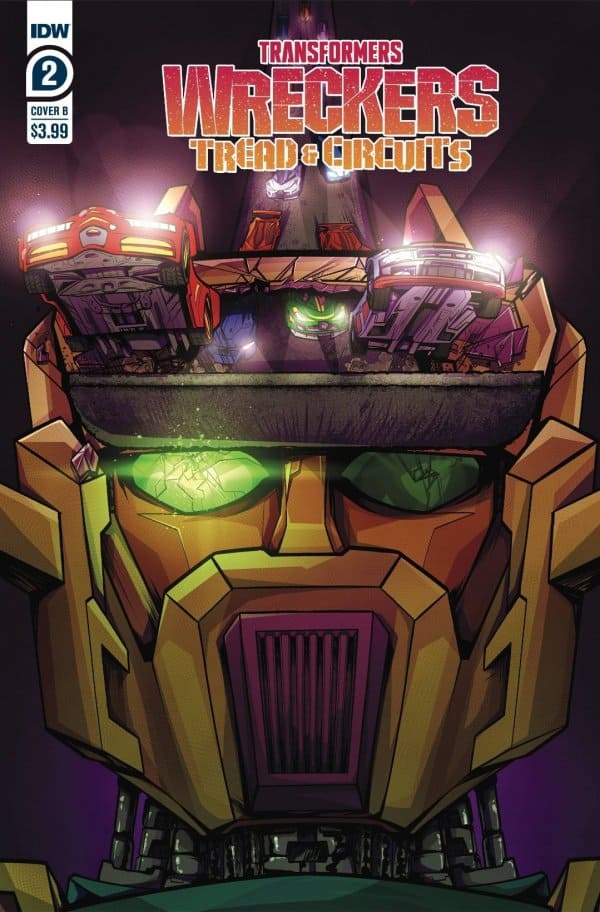 Wreckers divided!
Thunderclash leads the team on an investigation to reveal the true alliances of the other Speedia 500 racers-and discover if any of them are working for the terrorist group, Mayhem!

Meanwhile, Circuit, the Wreckers’ camerabot, finds himself face-to-face with Security Operations! With Mayhem on the move, which Wrecker won’t make it to the starting line?!

Info gathering? Rational discussion? Restraint? In my Wreckers book? Well, it sure is a change.

Transformers: Wreckers – Treads & Circuits issue 2 continues our lead up to the Speedia 500, Velocitron’s yearly form of election. The issue doesn’t exactly pick up where we last left off. Instead of picking up on our cliffhanger ending, we find ourselves following The Wreckers as they make conversation at a local bar, looking for info and sizing up the competitors for the Speedia 500.

A major departure from previous Wreckers incarnations, who shot first and asked questions later. This issue spends most of its time giving us information about Velocitron and some of its citizens. As well as some of Axer and Circuit’s backstory. 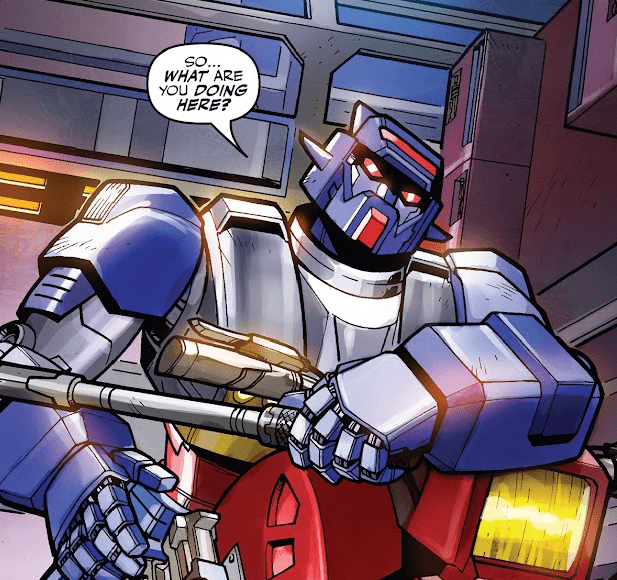 Though, with all this information given, there still is a lot to be desired. There’s a bit of jargon thrown around that has no real context. Moreso pertaining to some of Velocitron’s customs. With Axer’s backstory, there is reference to the Iron Hope, a ship that crashed and caused the mode lock of 100 Transformers. This was referenced near 20 issues back in the main comic. Though Axer’s discussion of it doesn’t provide more context and in fact leaves more questions than answers.

It does need to be mentioned that it’s a departure to see him working for the supposed good guys ‘sec-ops’ and not, well, the usual Decepticons. But I wouldn’t be surprised if he turns out to be working with Mayhem in some way. 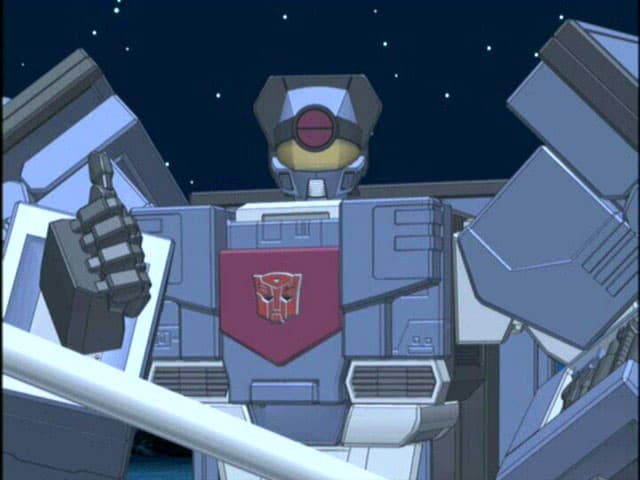 I’m definitely intrigued to get more info on the world, characters and just general Transformers culture. Speaking of characters, much like any other Transformers book, this issue is littered with character designs pulled from various stories, toylines and continuities. This reviewer was especially excited to see Cybertron Cult Fan Favorite, Signal Lancer make a cameo.

Despite some of the issues, David Mariotte still manages to deliver a really fun read with a great team of characters. Jack Lawrence, as expected, provides great layout and expressive characters in each of his panels. It goes without saying he’s one of the best Transformers artists in the game. Brittany Peer takes over on colors for this issue. While her coloring does have major differences from Candice Han’s, her work still feels right at home in this book. Especially with the vibrant colors for lighting. Jake Wood is on letters again, but he sadly doesn’t get much time to shine in this issue. The amount of SFX this issue is very minimal, but his dialogue layout remains consistently good across the board.

All in all, issue 2 of Transformers: Wreckers - Treads & Circuits leaves us off in a bit of a weird place where something major has happened, but there's no real time to take it in...yet. The issue itself is incredibly fun, but feels like it gets dragged down by its place in the story.