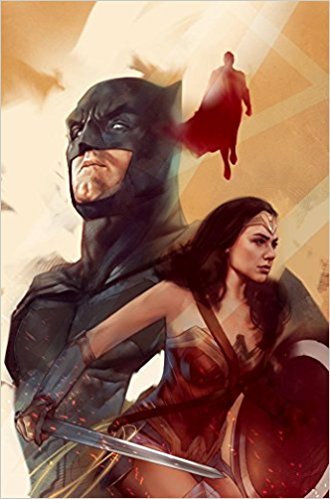 The evil Circe has our hero’s under her control. Will she be able to sacrifice them to the Pandora pits and regain her lost soul? Or will her plans be foiled? Find out in this action packed conclusion of Trinity!

What You Need to Know:
The evil witch, Circe, has attempted to recruit a Trinity of evil in order to capture the Trinity of light and sacrifice them to her newly discovered Pandora pits in order to regain a soul she lost years ago. Although Lex Luthor turned her down and Ra’s Al Ghul tried to betray her, Circe is still obsessed with beating our heroes, and from the looks of it, she has all but won!

What You’ll Find Out:
Circe finally has the Trinity and a few other members of the group fighting against her evil under her control and although she hasn’t caught Batman that won’t stop her from doing everything she can to win. After being fatally wounded, John Constantine has a few last words to say to Circe as she decides maybe she doesn’t need Batman for her plan. While Constantine does what he does best (be a smartass). 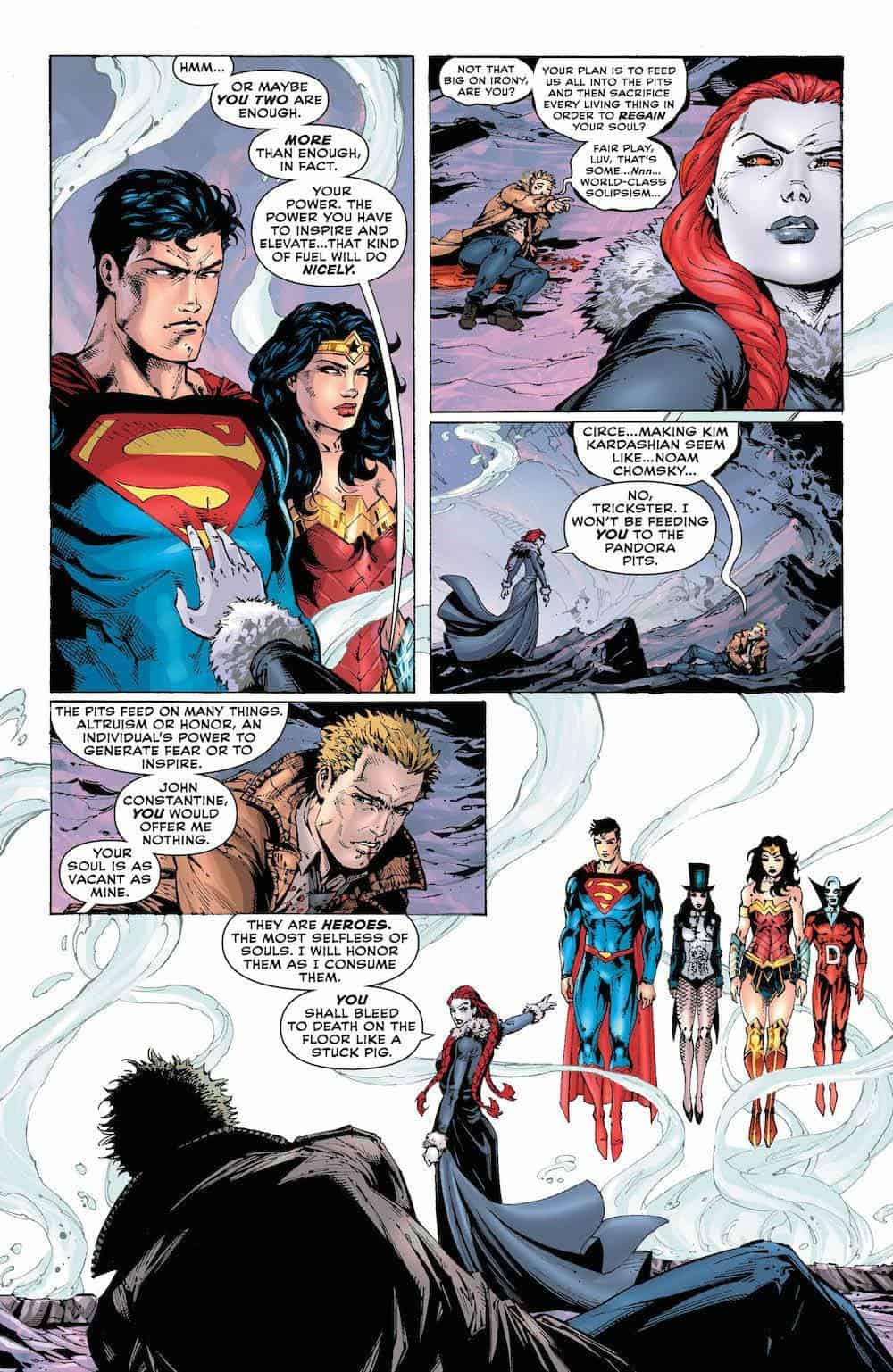 Batman and the Outlaws crash the party and put a stop to Circe’s plans. Shocked, Circe wonders how the Outlaws have rid themselves of their possessions from the Pandora pits. As Batman explains what he has done to free them he does something very similar to the rest of the brainwashed hero’s setting them free! 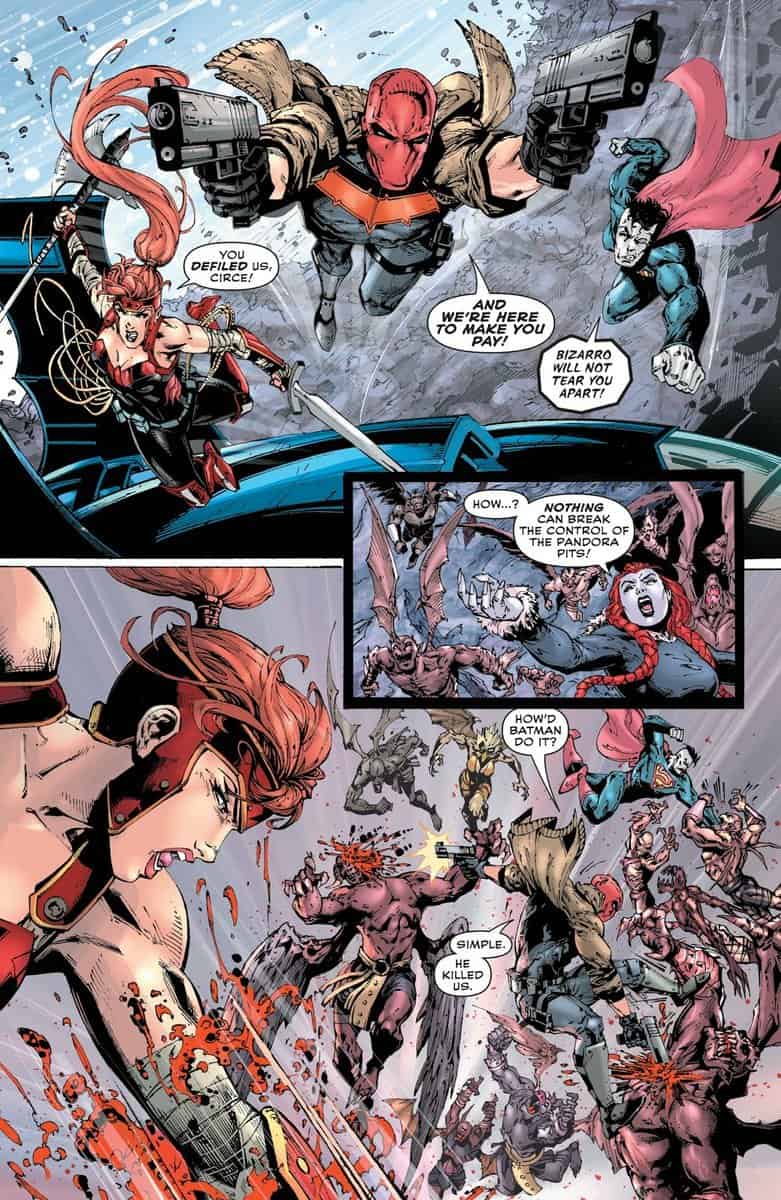 After Superman grabs Circe she decides to go on one last offensive against the league before she admits defeat, and a few of the most stunning panels of this arc are during the fight against Circe and the group, which reminds me of old Justice league Cartoons. It’s not all fun and games in this issue though when Circe reminds the group that they may have forgotten about one poor casualty. When all seems lost for poor John Constantine the mystical Zatanna saves his life with some easy magic.

All seems to be said and done when all of a sudden Ra’s jumps out of the pit angry and seeking revenge on the witch that betrayed him as he stabs Circe and drags her down into the pits. 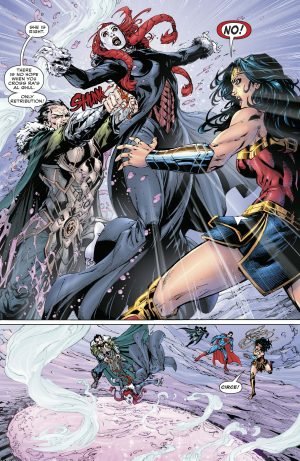 Scared, Circe believes this is it, and with her last few breaths on their way she sees the face of hope as Wonder Woman tied to the lasso of truth held by everyone else, saves their most faulted enemy.

What Just Happened?
Williams finally gets me interested in this last issue of his first arc of Trinity and while I wasn’t fond of what came before it seems this issue really knocked it out of the park. Although the ending felt a little rushed it was very nice to see everyone from this arc come back for one shining moment.

The art was very much better done and consistent in this issue. Jim Lee seemed to be the big influence for the art in this arc and it fit this last issue well when all the heroes came together in a very reminiscent ending to a hero’s journey to defeat the villain no matter what the odds are.

The ending leaves itself open for a filler issue or two. I’m not sure if Williams will be returning for the next arc or not but I’d like to see this plot continued. The lore of the Pandora Pits wasn’t exactly explained well enough and with nothing about them in this issue, I hope to see them touched on more later on. Trinity has done really well connecting its stories from issue one on so I hope they keep up that trend, after this issue. I still hope to see Manapul come back to Trinity and continue his work, but after this issue, I won’t be as upset if Williams continues the title as long as he pushes out more fifteens and not fourteens (issue numbers).

Final Thoughts: The final issue of this Trinity arc is definitely an upgrade from the previous issues. The action-packed ending with a few nail-biting moments gave it that Justice League feel you get from the cartoons and there’s nothing bad to say about that. The art was much better fitting in this issue and it actually left me wanting more from this creative team. All in all, I’d say keep reading Trinity if you already are and if not then next issue might be a good jumping-on point.