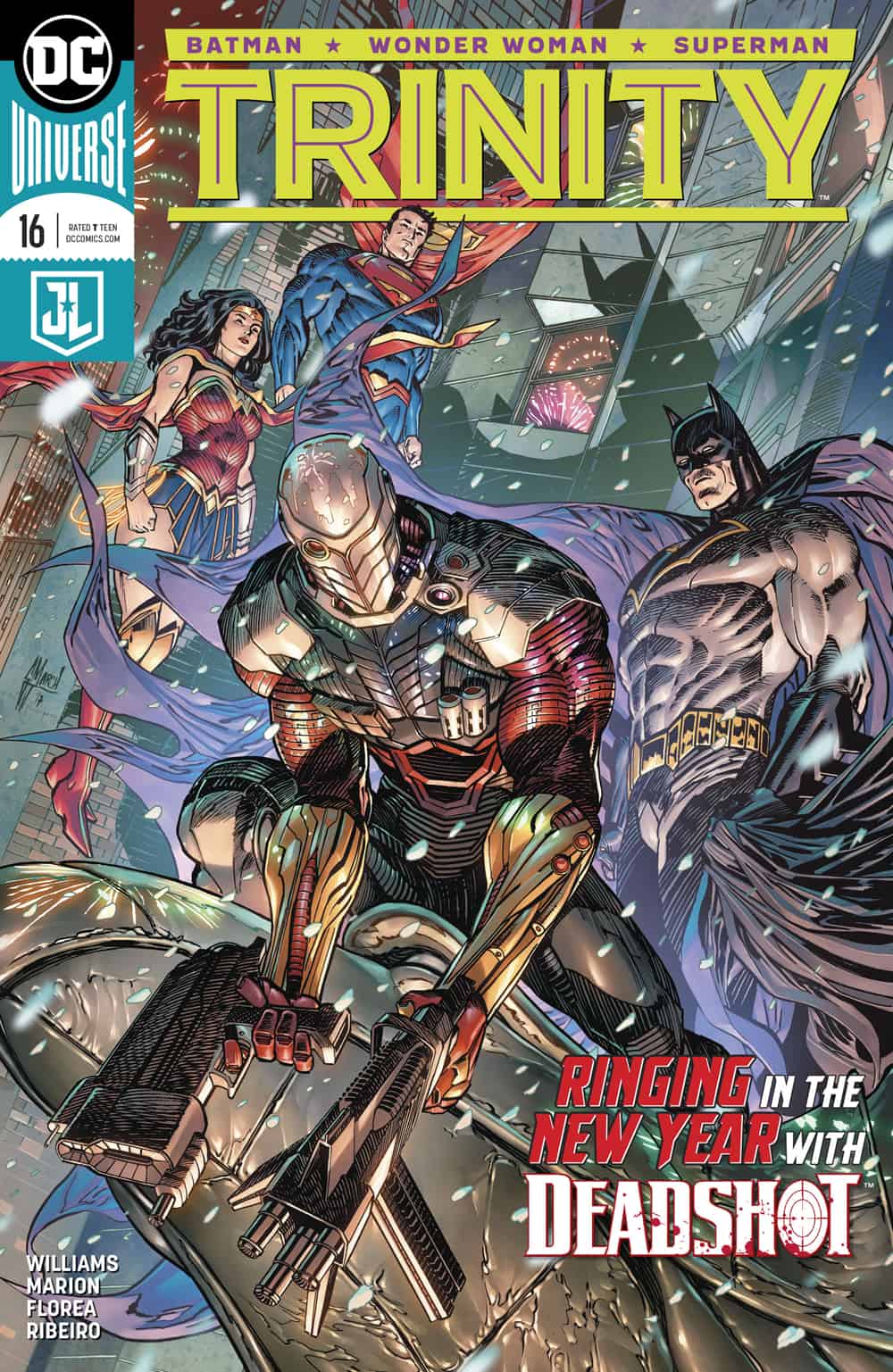 When the Kobra cult starts messing with Floyd Lawton it’ll take more than just Batman to help him this time. Will the Trinity help Deadshot save his daughter? The answer is no, no they won’t.

What You Need to Know:
Calling all the way back to the first issue of Suicide Squad, issue #16 of Trinity takes place on New Year’s Eve while Batman and Deadshot are hunting for Lawton’s missing daughter Zoe, again. Zoe has been kidnapped by a cultist group known as “Kobra” who is seeking revenge on Deadshot after he killed their leader. This story picks up from Floyd Lawton’s personnel file one-shot short story that took place at the end of “suicide squad #1”. In this story, Batman helps Lawton find Zoe, who has been kidnapped by Kobra (familiar I know). 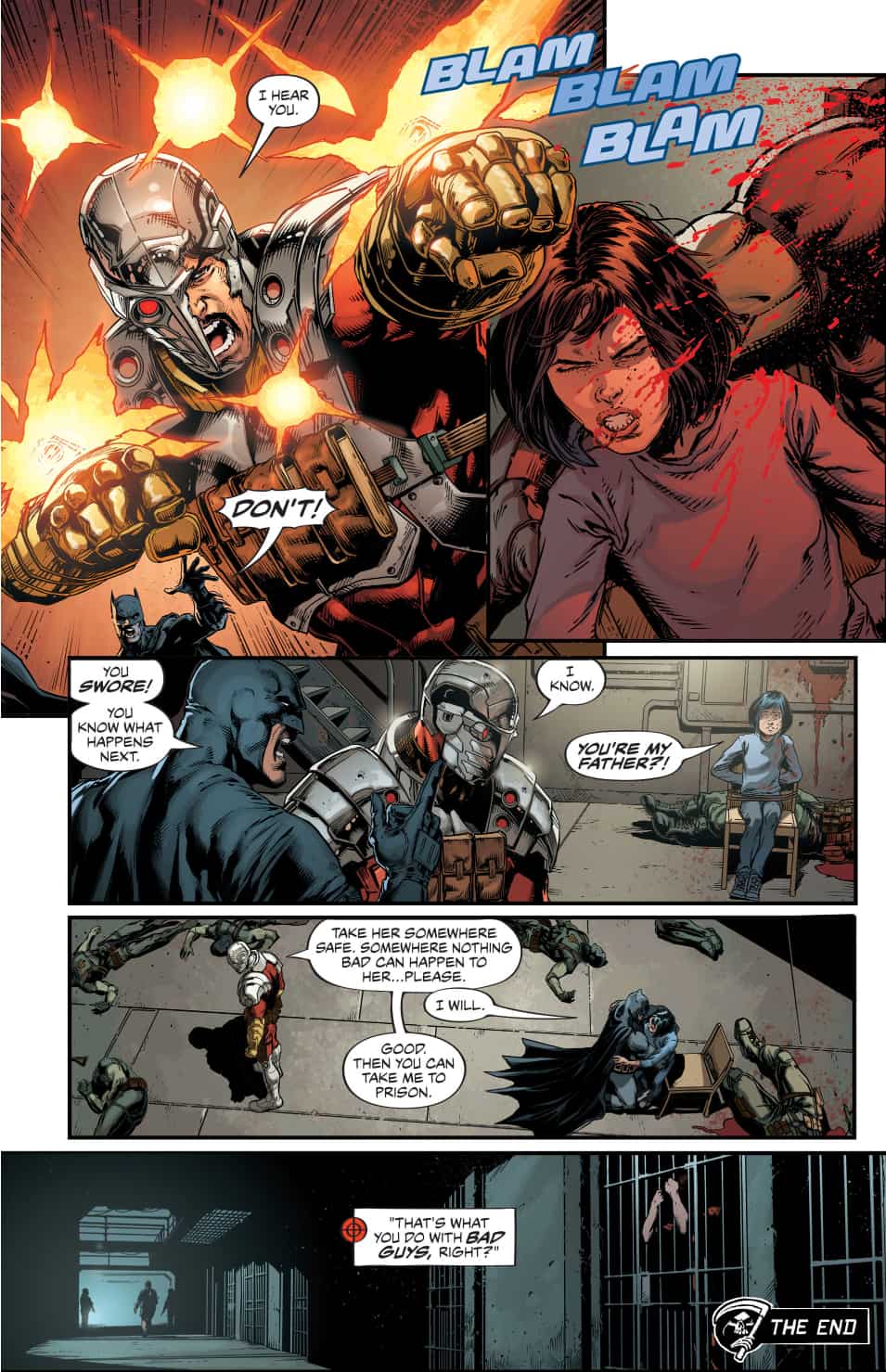 That story at least gets an ending when Deadshot shoots and kills the leader of Kobra and saves Zoe, only for Batman to stick him back in Belle Reve.

What You’ll Find Out:
It’s New Year’s Eve in Gotham, Bruce Wayne has thrown a huge party for all his loved ones, there’s only one problem, no Bruce. Diana and Clark start to wonder about their missing friend when they see an explosion in the distance. 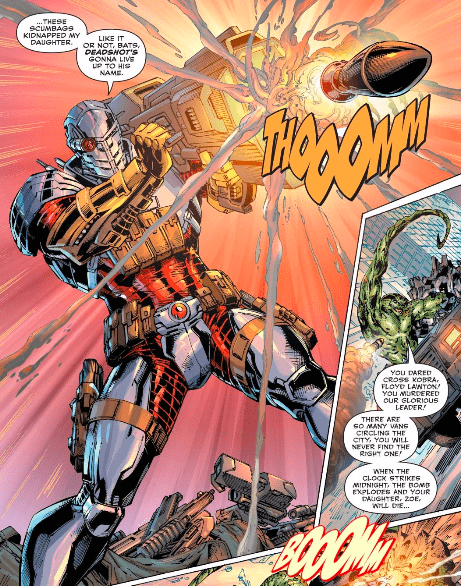 “No one dies today,” says Wonder Woman as her and Superman drop in on the scene where Deadshot had just blown up a Kobra van. Batman goes on to explain that he was there the first time this happened and that if Zoe was kidnapped again he would help Floyd save her. This time they must beat the clock for if it hits midnight Kobra will kill Zoe. The Trinity scatters as the decoy vans keep them busy until Batman and Deadshot start to think more like a villain. After Lawton realizes all the vans are decoys, and Batman figures out that Bruce Wayne was also a target, Batman leaves Lawton high and dry to save his New Year’s party. 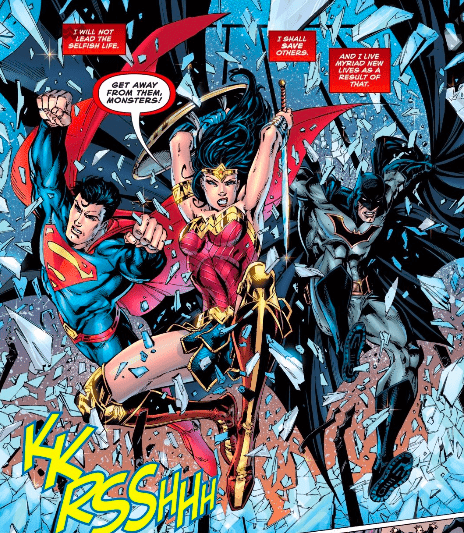 When the Trinity gets caught in a pickle by a kamikaze Kobra soldier its Deadshot who saves the day by putting a bullet in the mutants head just in time for Superman to push him into the sky far enough for the explosion to be clear. In the end, the Trinity thanks Lawton for saving them, even if it meant doing things his way. Before Lawton can leave Wonder Woman wraps the lasso of truth around him where he tells the Trinity to “Go spend time with the ones you love.” as the story wraps up.

What Just Happened?
The title of this section is a perfect example of how I felt after reading this story. Did the trinity really just team up with Deadshot? Is this really an epilogue story to a half an issue story from a year and a half ago? Well, both of these questions can be answered with a yes as much as I hate to say it. I enjoy that Rob Williams is trying to connect his work, but in my opinion, it’s execution is a little skewed. This story would have worked better as a Suicide Squad filler issue than it did as an issue of Trinity. I also feel like this story should have happened about a year ago because honestly, I had to reread Suicide Squad #1 just to fully get a grip on what was going on here.

Some of the characters feel off during this issue. Wonder Woman seems so offended by Floyd killing. I’ve never really seen Wonder Woman care about killing, at least for the greater good. Superman can’t move a simple Kobra soldier because the strongest powerhouse in DC lore can’t pick up a street-level mutant gang member. 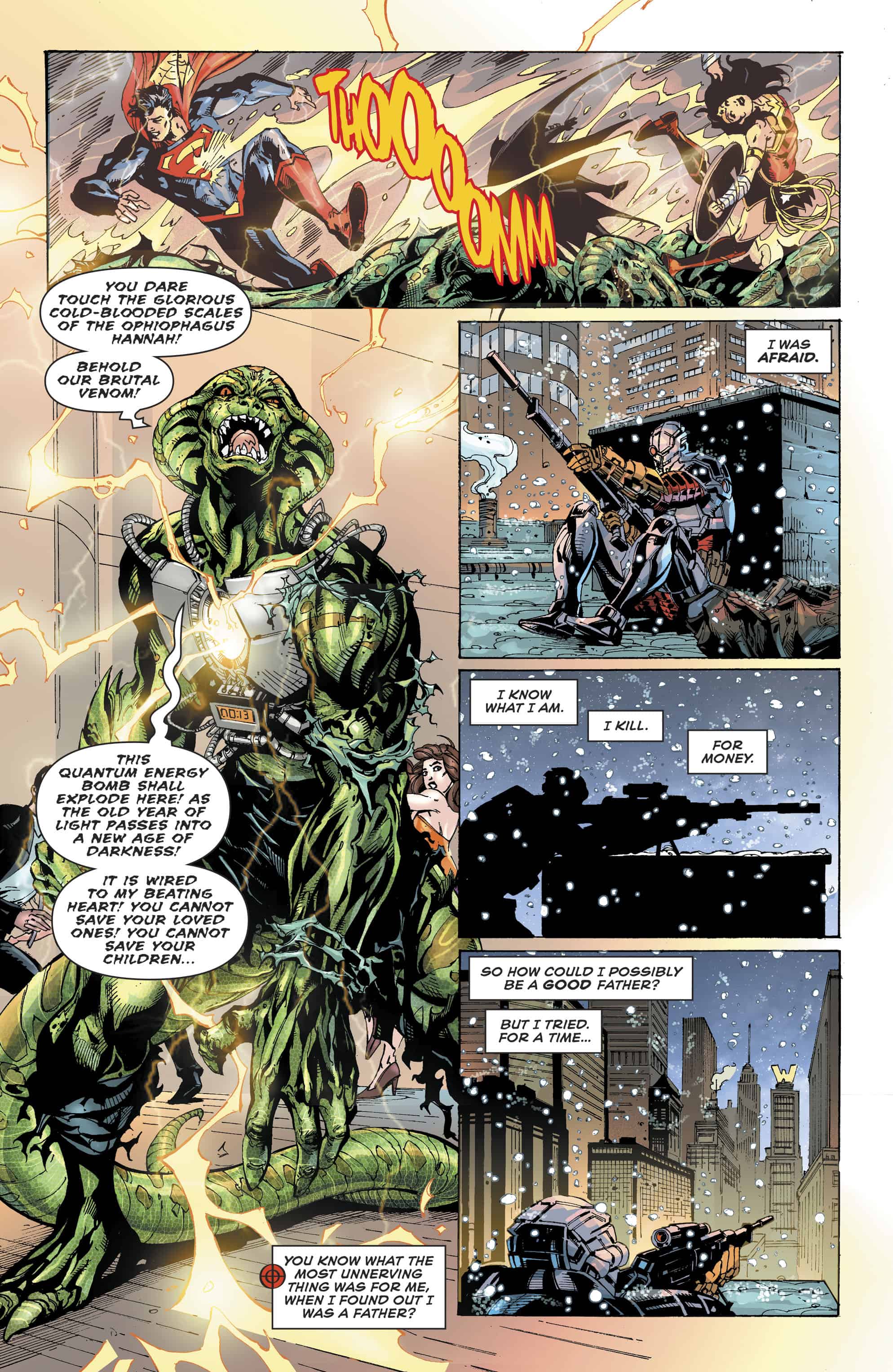 If the electricity did something to Batman or Wonder Woman it would be fine, but I’ve seen Superman swim through the core of the earth… somethings just not right with that.

There were significant loose ends in this issue as well, like when and how did Kobra contact Batman? Do they know his secret identity, or is this just calling back to the hit they put out on him when they originally kidnapped Zoe? The biggest question is definitely about Zoe. Where is she? Does Kobra actually have her or was that just a ploy to keep Batman away from the New Year party? I love comics that raise questions and make me think, but this isn’t what I mean when I say that. All we can really hope for is that Williams picks this story back up. Which brings up yet another question, is this even a one-and-done issue, or will we see this storyline for a third issue? At which we would have a full story arc.

The art is a complete one-eighty from the story. Personally, V Ken Marion’s art has been the high point of this creative teams run on Trinity with consistent line work, and a clean look for the Trinity that somewhat reminds me of Jim Lee. The snow scenes really get me in the holiday season mood which works in this case, I almost can’t believe someone wasn’t drawn with a Santa hat on in the party panels.

Rating: 6.5/10
Final Thoughts: Rob Williams ends his run on Trinity with a one-and-done that feels just a little too big. Connecting to a story from a year and a half ago doesn’t make for good storytelling unless it shows itself in a big way later on like Doomsday Clock. Trinity #16 is a step up from the last arc of Trinity, but in the grand scheme of things falls short where Manapul was so strong. I can honestly say I’m excited to see James Robinson’s work on Trinity, even though his work on Wonder Woman isn’t quite as strong as Greg Rucka’s.