Trover Saves the Universe #1: Pop in Your Power Babies 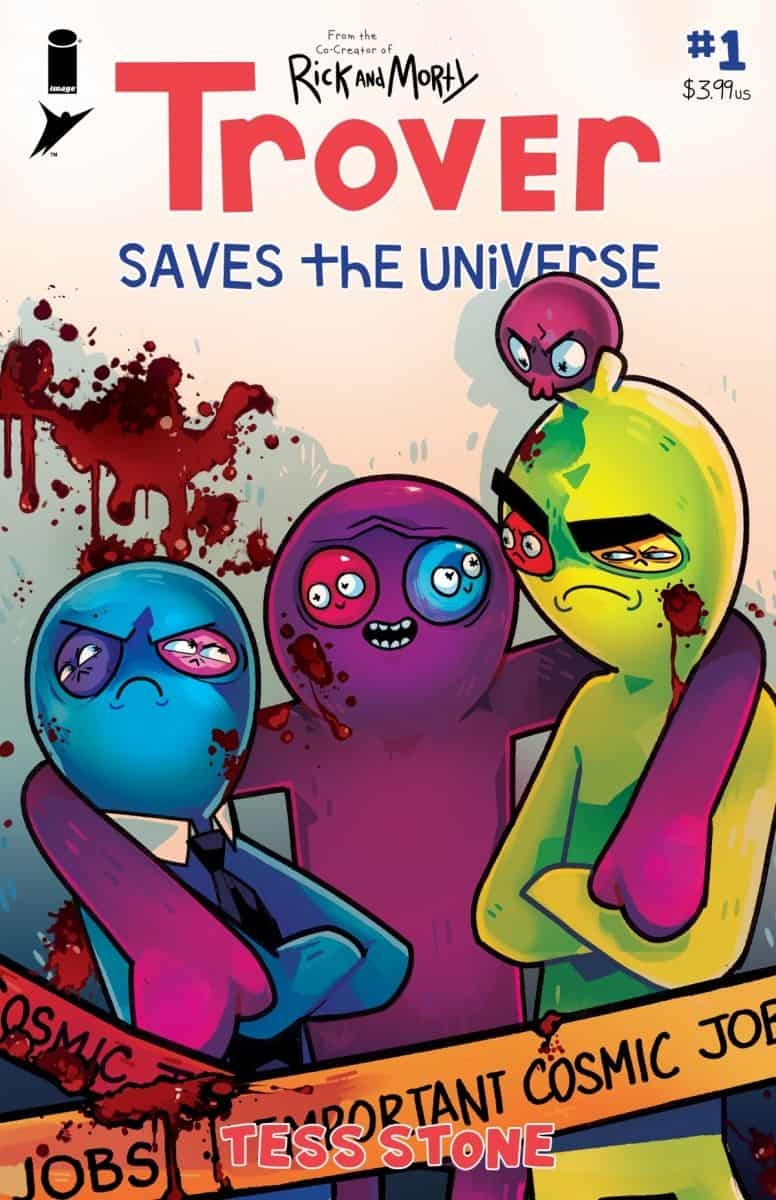 For fans of Rick and Morty and Mega Man!

Welcome to the ICJ - Important Cosmic Jobs - where the boss ranks employees, and at the end of each month, the worst employee literally gets the axe. It's... not a great gig.

But when ICJ's top eyehole monster winds up dead, the company's most inept (and rival) employees, Klover and Bo, are falsely accused of his murder and hunted by the Space Cops!

Now they must clear their names and unravel a conspiracy that reaches the very top...that is, if they don't kill each other first!

Trover Saves the Universe #1 is a rare example of how to make a comic book tie-in for a video game work. At no point did this issue feel like a cash grab, which often feels like the case with these types of books. A huge reason why it works is Tess Stone, who wore all of the hats and wrote, illustrated, and lettered the issue. Stone has created a genuine story that expands on the bonkers world of Trover Saves the Universe. There are obvious nods to the game, mainly the events of the issue are being told by Trover to the chairorpian, who is the character players control in the game. In a way, you are recast as this character, playing the role of a companion to Trover, just as you are in the game. 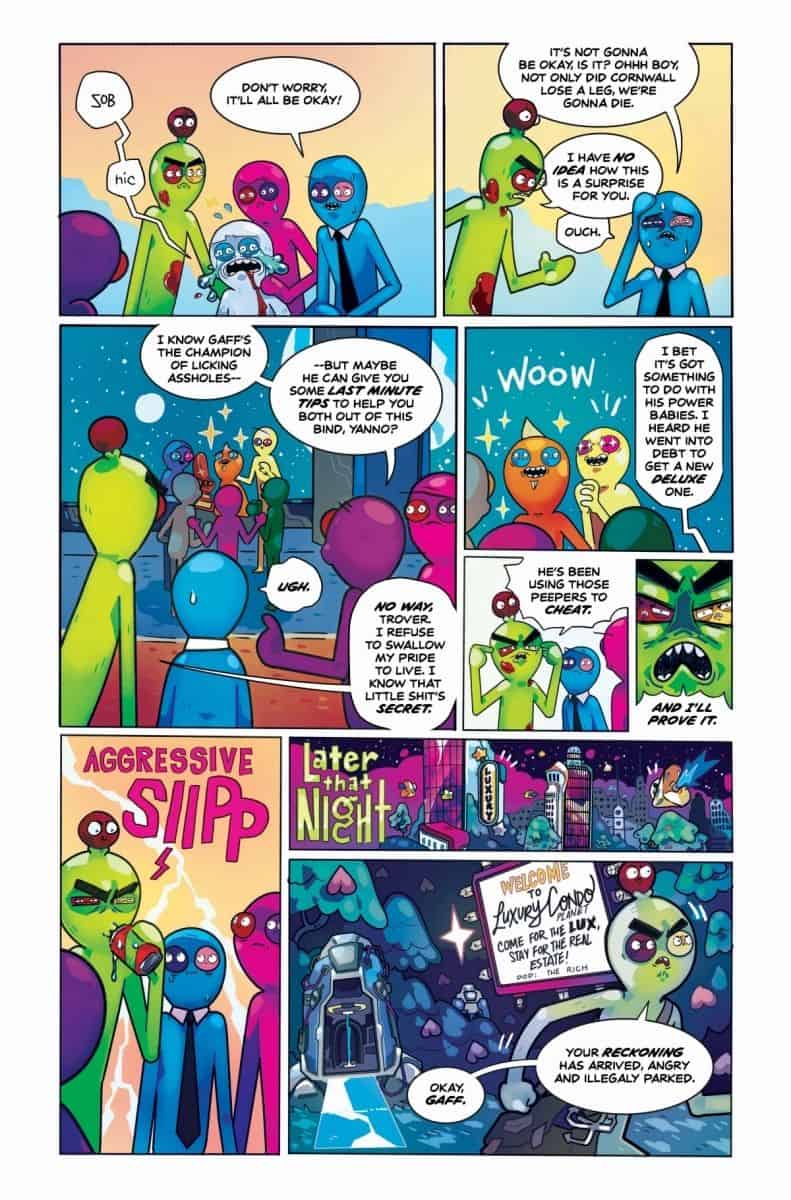 That being said, I was happy to find that this first issue is easily accessible for those new to the property. You don’t need to have played the game, though getting to know the world and characters in the game is a great idea. This is especially true because of the property’s creator Justin Roiland’s voice work. The humor of the comic and especially the game are similar to Roiland’s other creation, Rick and Morty. I found it hard not to hear his voice with every line I read and that is far from a bad thing. When you grab an issue, you will too. A huge reason why it is so easy to do this is because of Tess Stone. He flawlessly captures the spirit of the game, which makes it feel like such a natural addition to the property. The art style of the game translates well with no loss of quality translating something 3D (especially in virtual reality) to a comic. 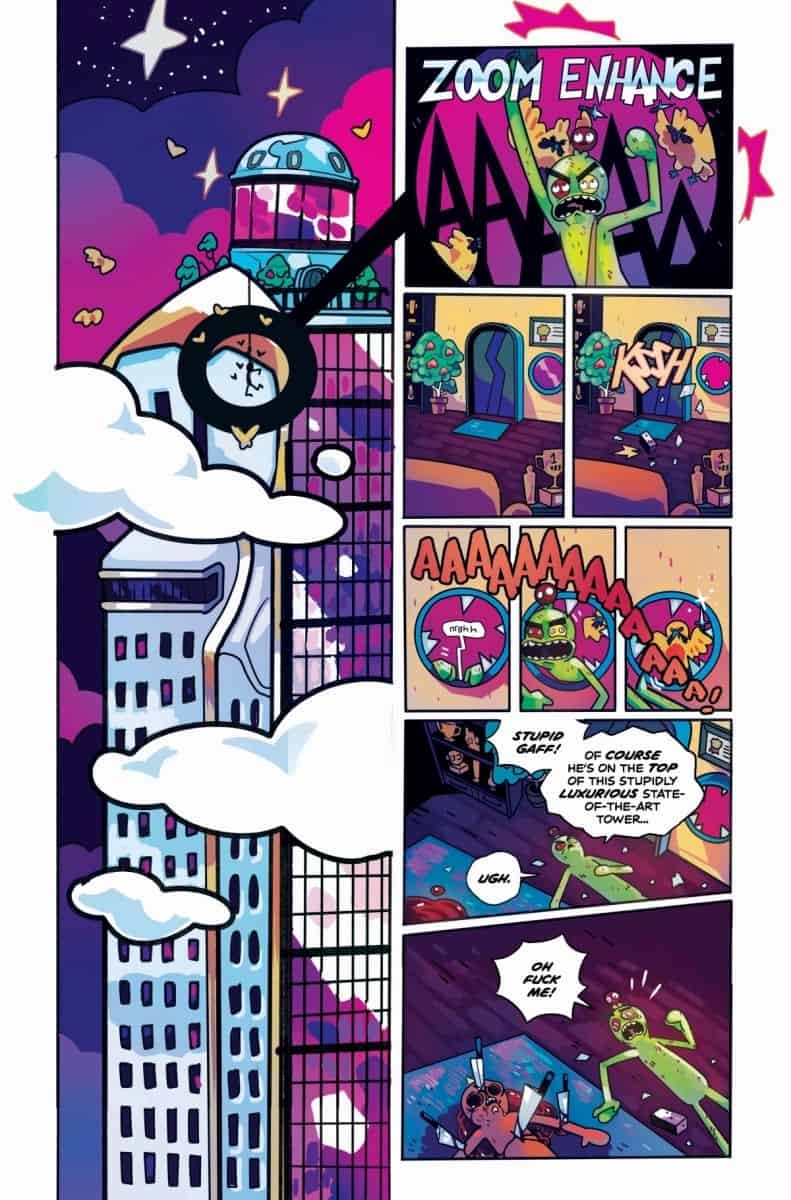 Characters are well designed and unique, which is an accomplishment due to the simple character designs in general. Stone gives Klover and Bo unique enough appearances and mannerisms that it doesn’t take long to be able to tell who’s who and a good grasp of their personalities. Stone’s talent and cleverness are on par with the game in many ways. The game is known for its innovative and clever use of VR, while a comic can’t do these things, Stone is able to take advantage of the comic medium. Trover peels back panels, almost as if he were turning the page himself to start the story. Time and space are a huge part of the game, and while the game allows you to time warp and teleport, the book makes use of characters breaking through panels to advance ahead. The humor and self-awareness of the game, and Roiland’s other works, is alive and well in this issue thanks to Stone without feeling like just another video game comic book.

Trover Saves the Universe #1 has all of the hilarious time and space fun that made the video game great translated brilliantly to the comic book medium.

Pop in your power babies and grab an issue!

Trover Saves the Universe #1: Pop in Your Power Babies