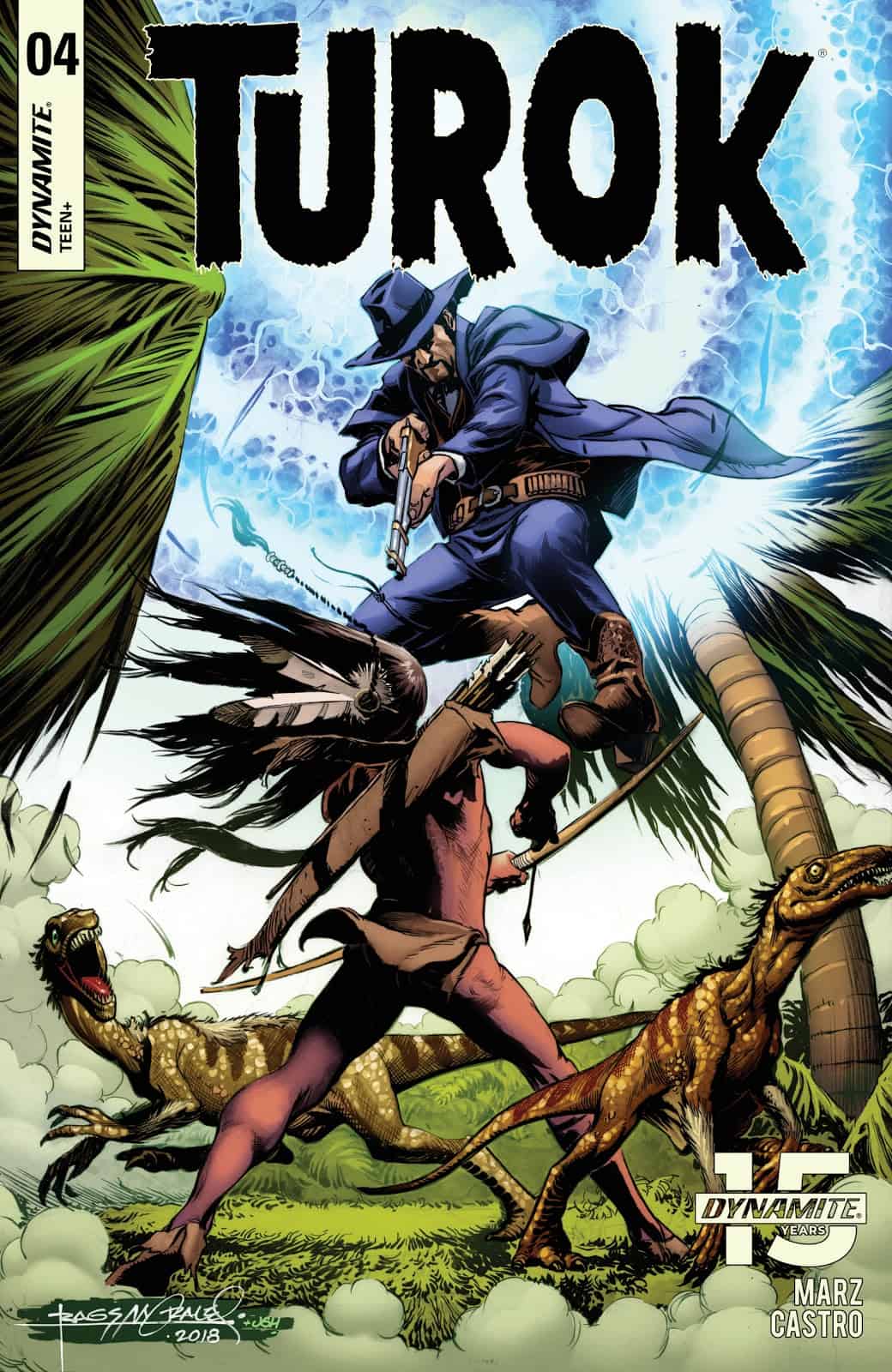 Natural instincts of survival take Turok and his brother on a trail of the Lost Valley. Dinosaurs, Neanderthal men, and United States Army cavalry…oh, my! “Time” is of the essence and a woman from the distant future leads them to find answers, but a greater threat lurks until the fitting time. After fighting some dinosaurs, this mix match of allies find what they have been searching. However, is it really what it appears to be? As Turok and the others stand their ground, the dark dressed, old western style mystery man appears and immediately kills two more of the cavalry men. Wait! There’s something happening… The mystery man is changing and seems to have a separate own agenda! 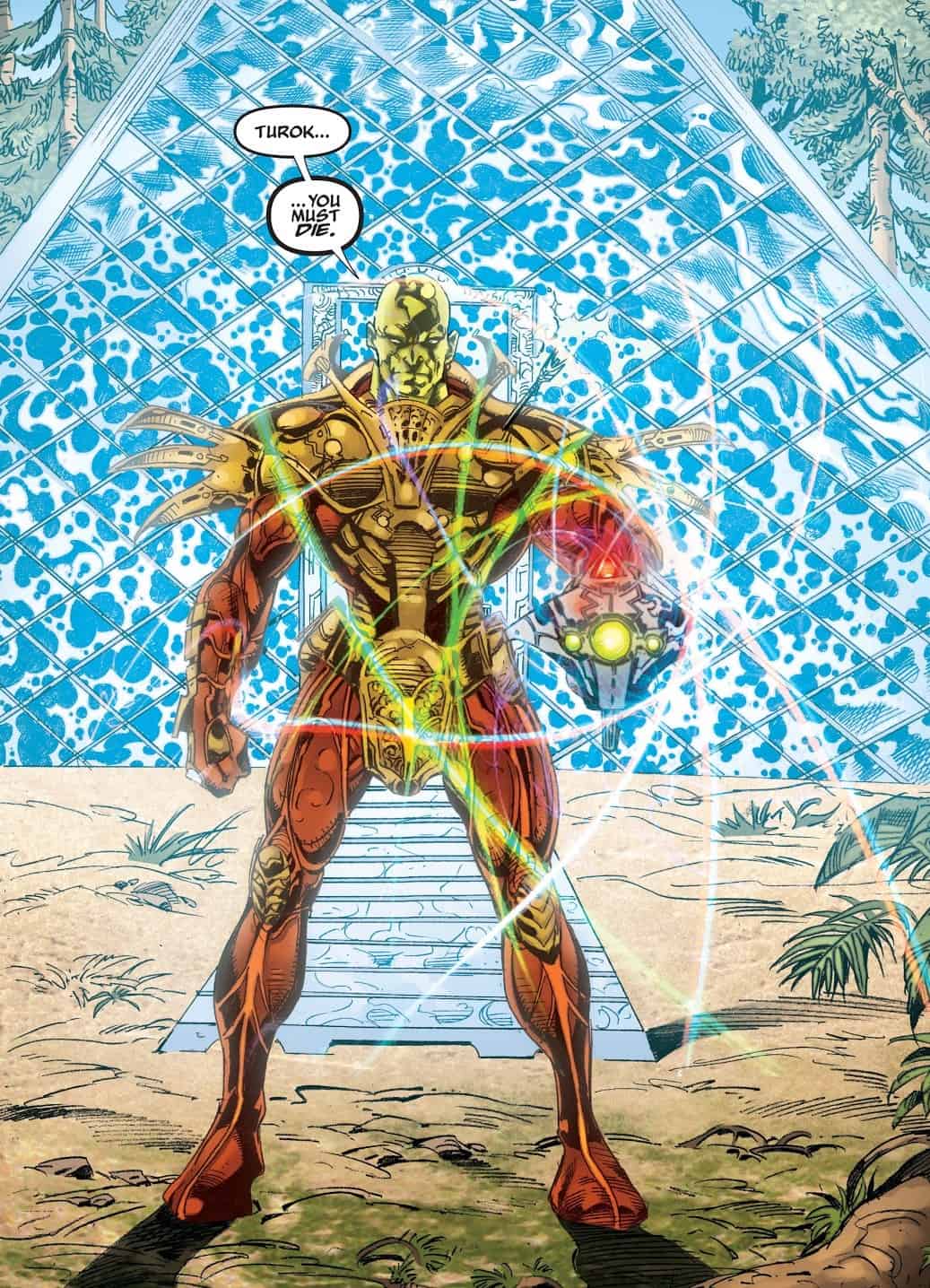 Turok #4 begins with a muscular slightly-aged Native American dressed in semi-modern clothing. He defends himself with skillful archery sportsmanship as enhanced creatures hunt the prey. The action and suspense on survival skills provided excitement from each panel to the next. This would look awesome in IMAX 3D! Honestly, at first, I thought that I picked up a #4 issue from another volume. It was not until page 8 that I knew it was the right one.

A three month gap from the last issue did not help, but the direction becomes clear once more. A mystery man wants Turok dead, but why?! Andar and the other misfit alliances help to defeat this evil man. It is Turok’s marksmanship that provides the final blow. Turok follows the dying stranger into the glowing pyramid to seek out more answers. There is something strangely familiar within this glowing capsule and it calls out to Turok. Then something happens… 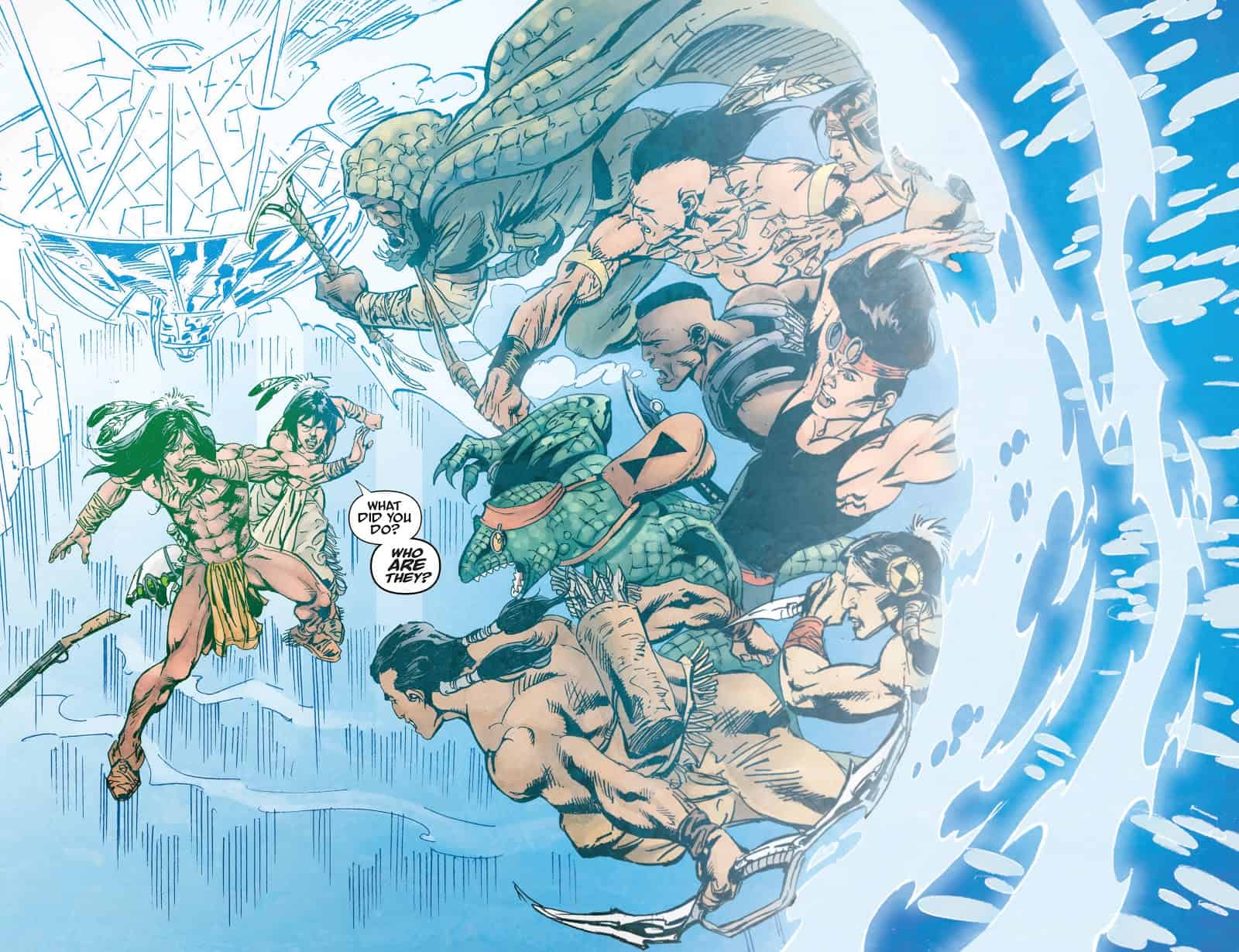 Now, the beginning of Turok #4 becomes clearer. However, Turok and Andar seem to be lost without words.

Ron Marz storytelling is straight forward to the point style. This is not necessarily a bad thing. Marz draws the readers in with a nice bait and hook that keeps the story rolling to the end of the issue. I like how Marz leaves each issue with a nice cliffhanger to keep the readers interested enough for wanting more, but just have to wait. I do wonder… maybe, this issue could have been devoted more into character development for this mystery man? Well, maybe Marz is saving that for the next issue or is “Times Up”? LOL!

The artwork in Turok #4 was much better than in the first three issues. Roberto Castro’s talent really shined as he feed my eyes with such delightful candy. The first eight pages were superb with action, facial and body details along with Salvatore Aiala fantastic color coordination. Castro and Aiala created some unique, almost realistic, dinosaur humanoid creatures with modern day intelligence.

Cover A artists, Rags Morales & Jorge Sutil really relates to the whole picture that represents Marz’s story. However, I must give a shout out to Cover B artists, Butch Guice & Dan Brown – AWESOME COVER!!!

Turok #4 is my favorite issue thus far. Not perfect, but Marz clearly has the skill to give his fans what they want!