Uncanny X-Men #22: Are You Not Entertained? 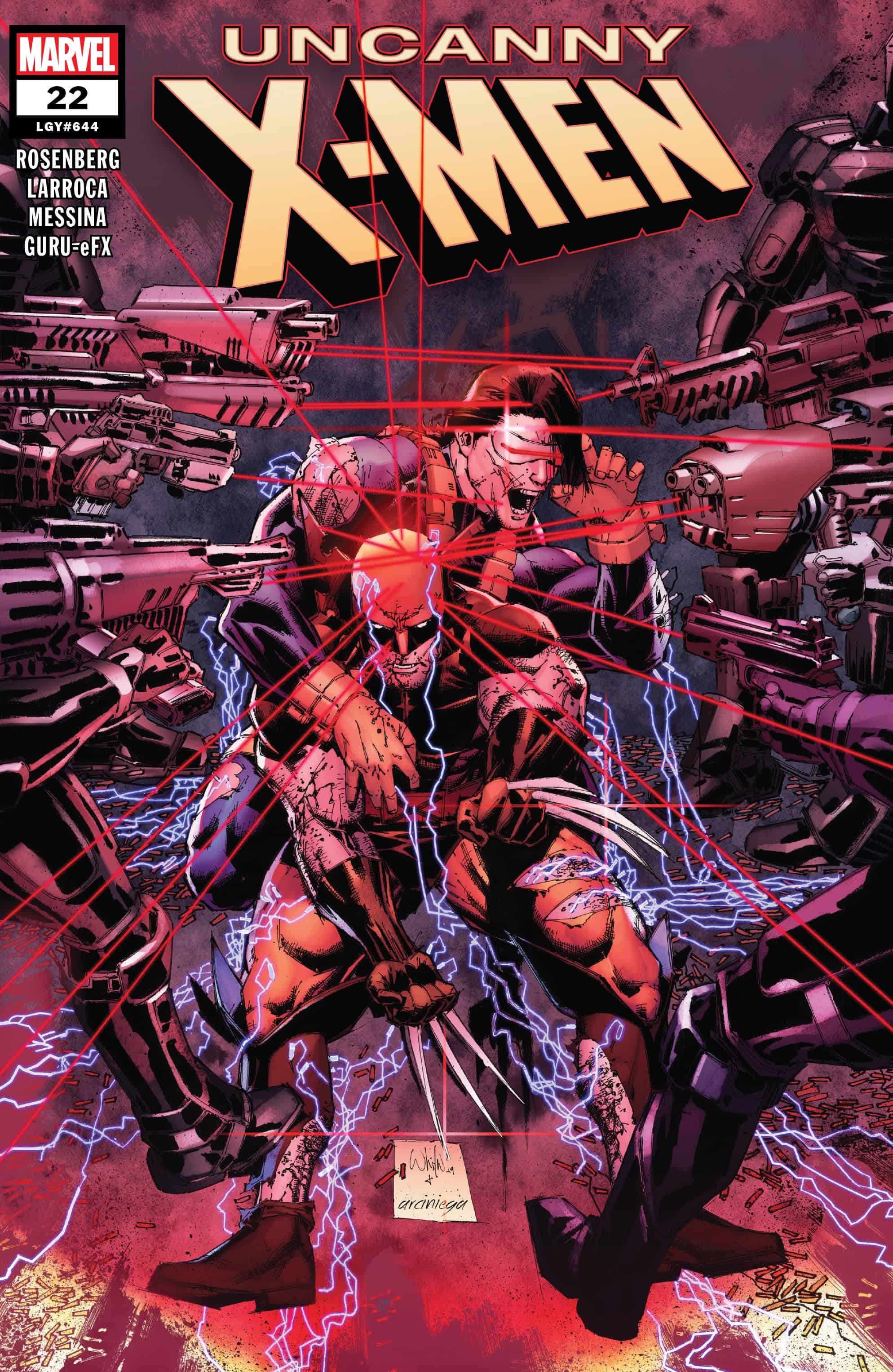 As the end draws near Scott does some soul searching and of course it’s time for one last fight before the final curtain. As the Sentinels arrive and Havok and Warlox both self destruct in an attempt to destroy them all once and for all Callahan makes a move on Emma. After yet more death and the loss of Madrox Wolverine dispatches Callahan, but it doesn’t stop the Sentinels. If only there were more X-Men to save the day… 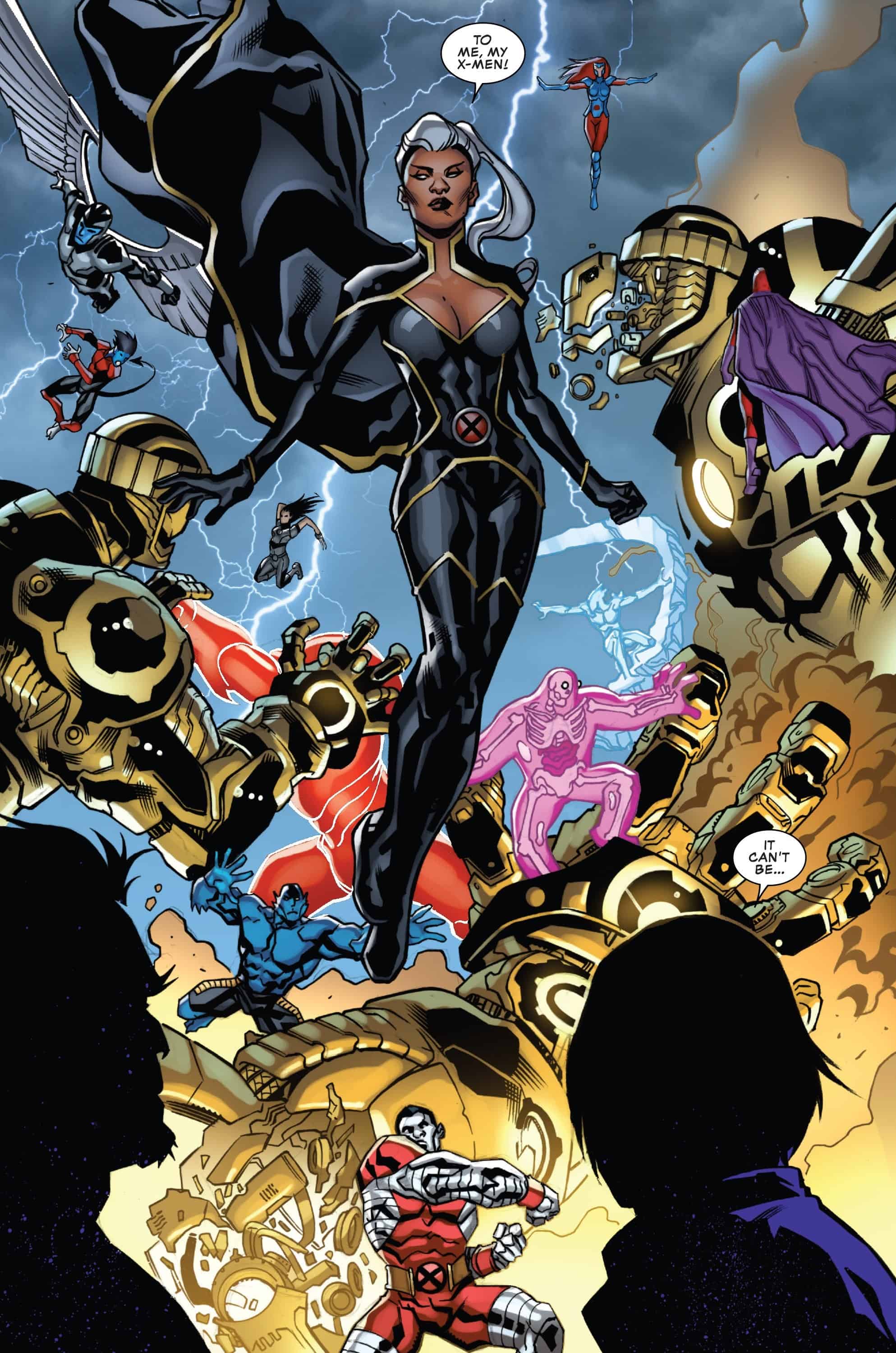 When the dust settles notes are compared about what everyone has been dealing with in their time apart. And once everyone is caught up on the ultimate price that has been paid, Cyclops is given the choice of maintaining the illusion set up by Emma or allowing the world to remember mutants once again. The outcome was never really in any doubt. 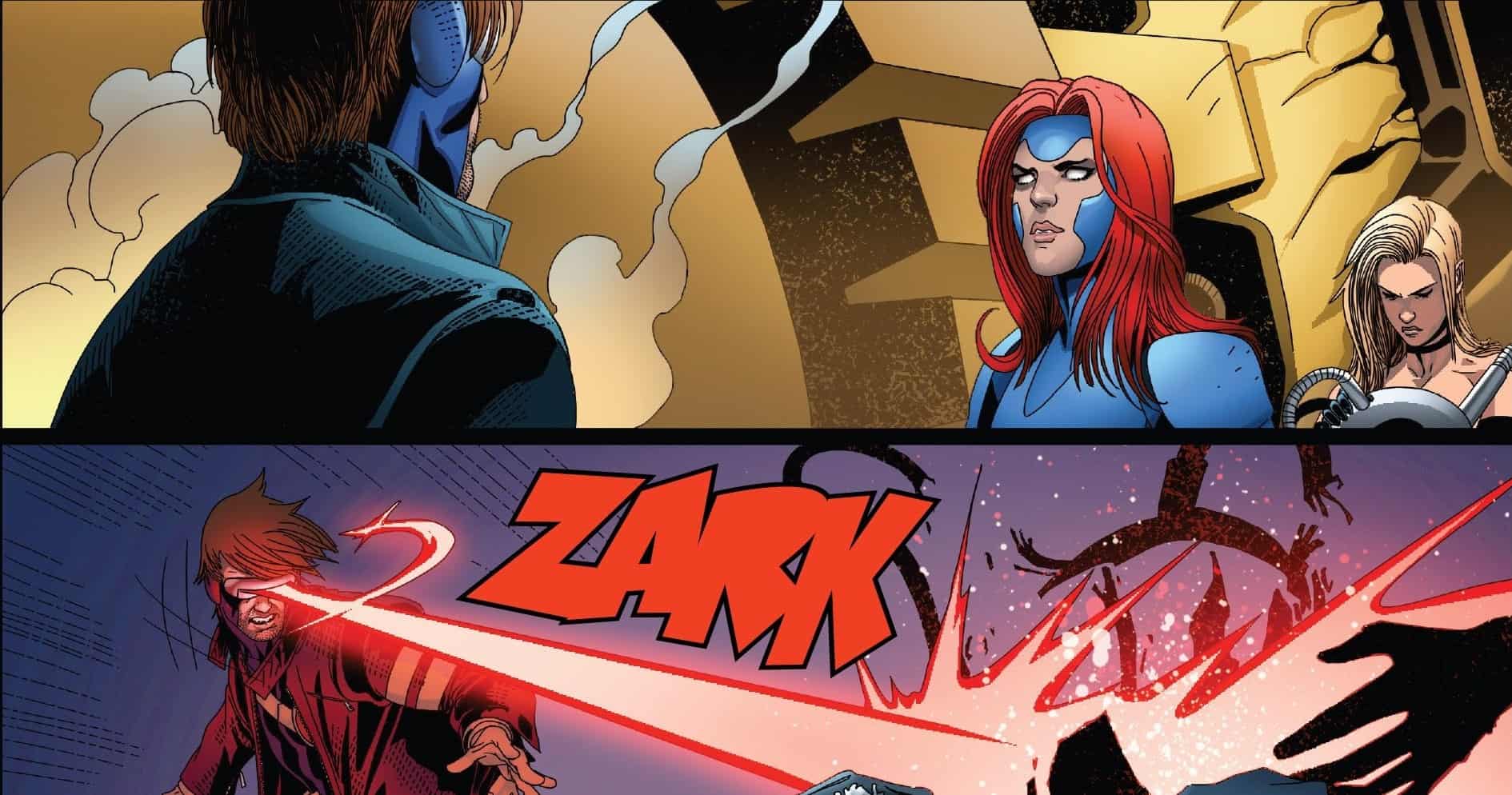 How conflicted was I on this one? Some things worked for me and yet some things just didn’t fly at all. Like everyone else I had seen the many deaths in this series as controversial. Though for different reasons. There was never a doubt in my mind that they would all be temporary. Much to my surprise I didn’t even balk when one of my favourites died this issue, so they didn’t really have any impact on me. Even Dani spelled it out in her explanation at the end. Not just a belief or strong conviction, she almost stated it as plain unassailable fact. And once again I hear Rosenberg’s own voice. 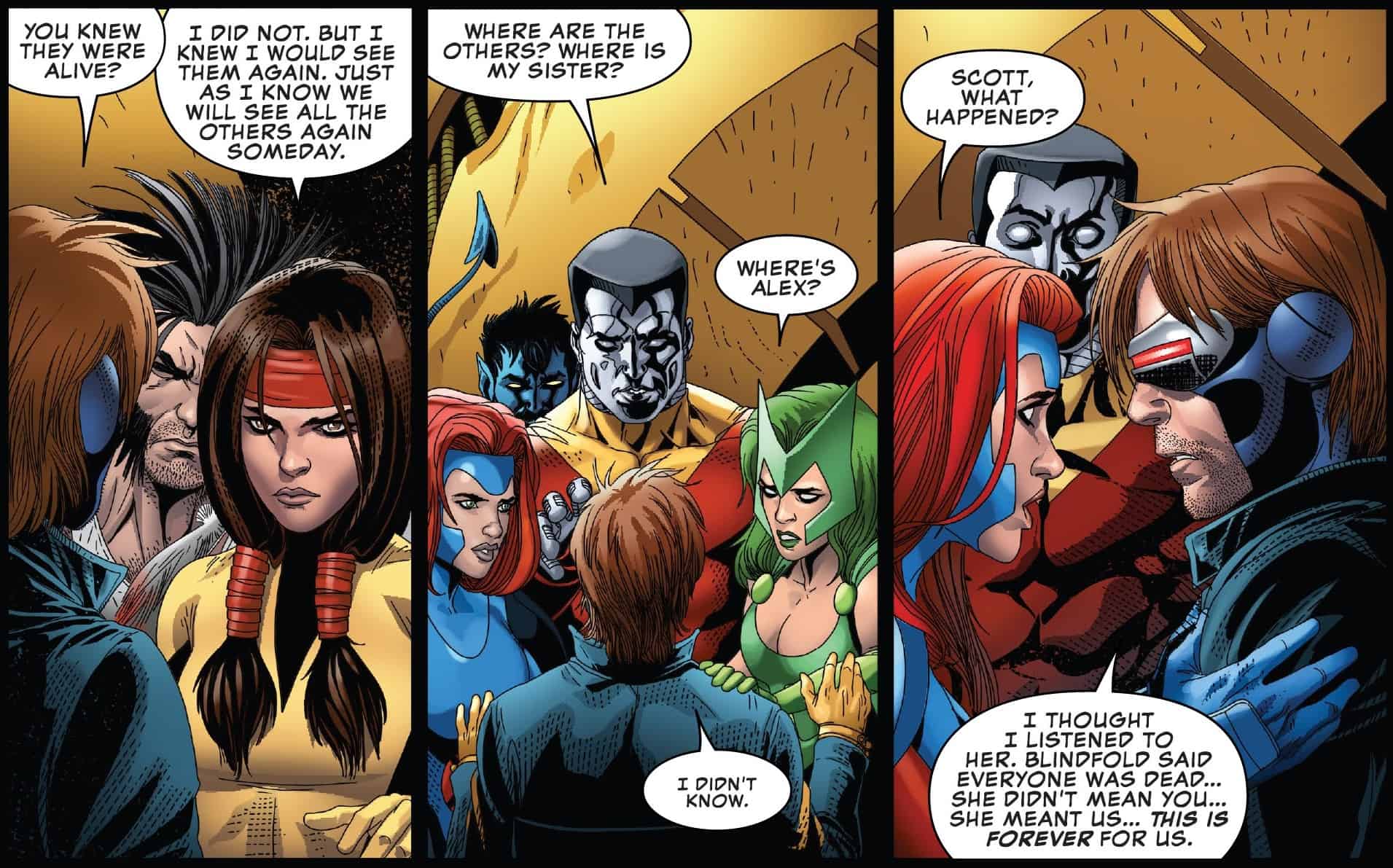 And we all know now that at least three of those dead have shown up in the new House of X previews and pretty much everyone is back come October. So it only remains to discover WHY it all happened in the first place. Rosenberg knew even before going in that whatever he wrote would be temporary anyway, so why not go in a blaze of glory? Put the pedal to the metal and don’t let up. I don’t blame him at all. Personally I liked the concept of what would happen in a world without the X-Men. It wasn’t pretty. And in the final showdown I had even thought he may have just been paving the way and setting up the apparent game changing situation to come. With the world forgetting mutants they could rewrite the rules. But no, the default state was reset.

However….there IS a whole new scenario planned and I think this is how it comes about. The world has had it’s chance to throw down on the mutant population and they can now see that whatever they do it won’t change things. So from that perspective the story worked for me. It was an interesting proposition to see how humanity coped with mutants in another world. It didn’t exactly work Scott’s way but then there were too few people fighting too many fires. But things are different now. Everyone is back and not only that but daddies home!! Mutants are here to stay and it’s time to demand some respect. How we get from this to Dawn of X is another matter. 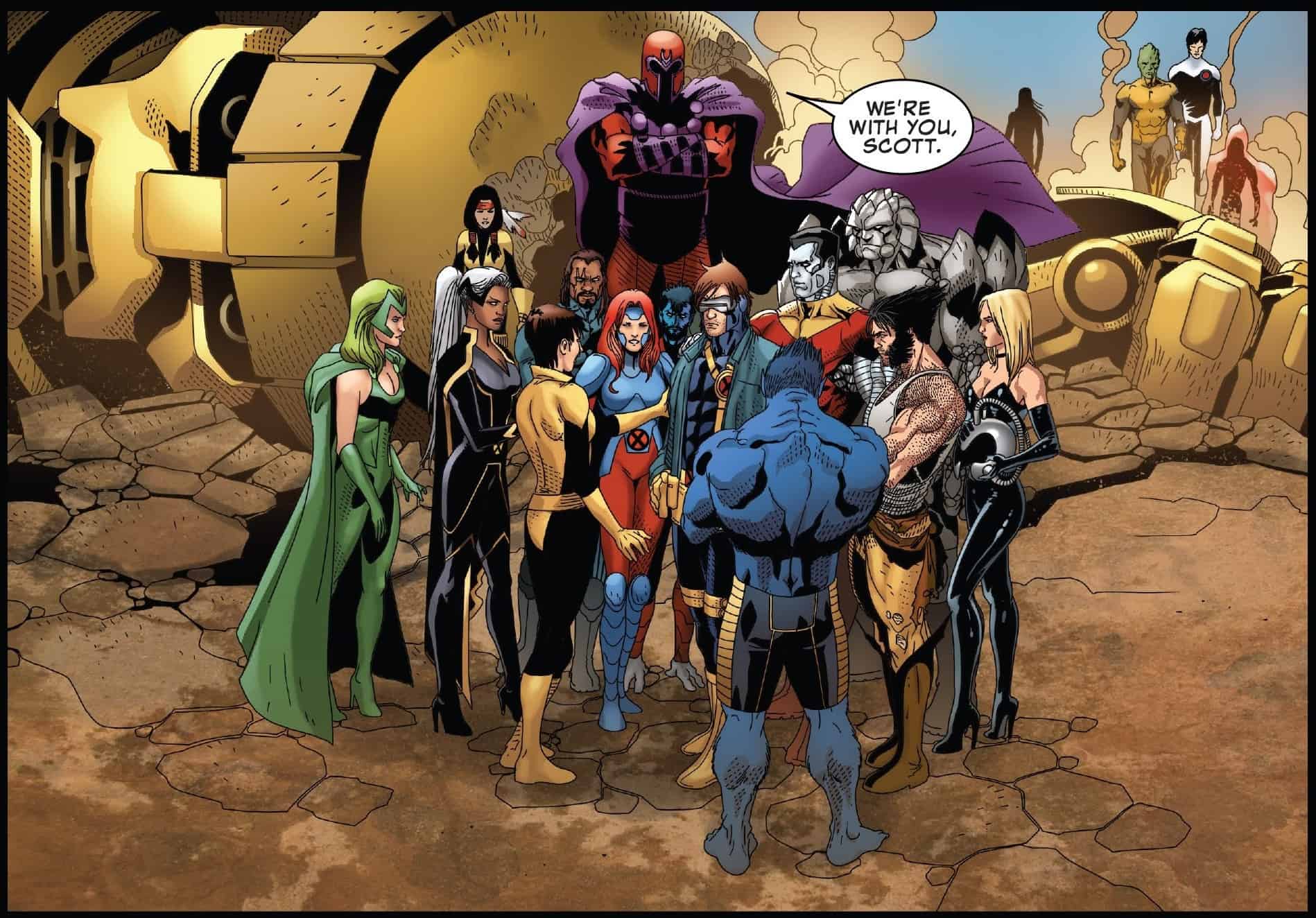 Two things that didn’t work for me this issue were the over the top Scott and Logan buddy-fest scenario and the complete U-turn of having Jean and Scott in that clinch. Grab ass Summers just became as basic as Logan. And she let him. With her leg coquettishly raised in a foot pop, like some prissy starlet in a thirties melodrama. After the ending of Phoenix Resurrection when she defined the new Jean we saw and what followed in X-Men Red? No I’m afraid I didn’t buy that at all. Maybe it was just their mutual relief at the other being alive, but even so I hope for the sake of character development they decide not to just go there so soon. It doesn’t matter if you’re a Jott fan or team Scemma, that ending did no favours to ANY of them. Although the final group shot had the strong and rather telling visual of Emma standing defiantly almost front and center, so it’s proving to us that she is still important and not completely discarded to the background. 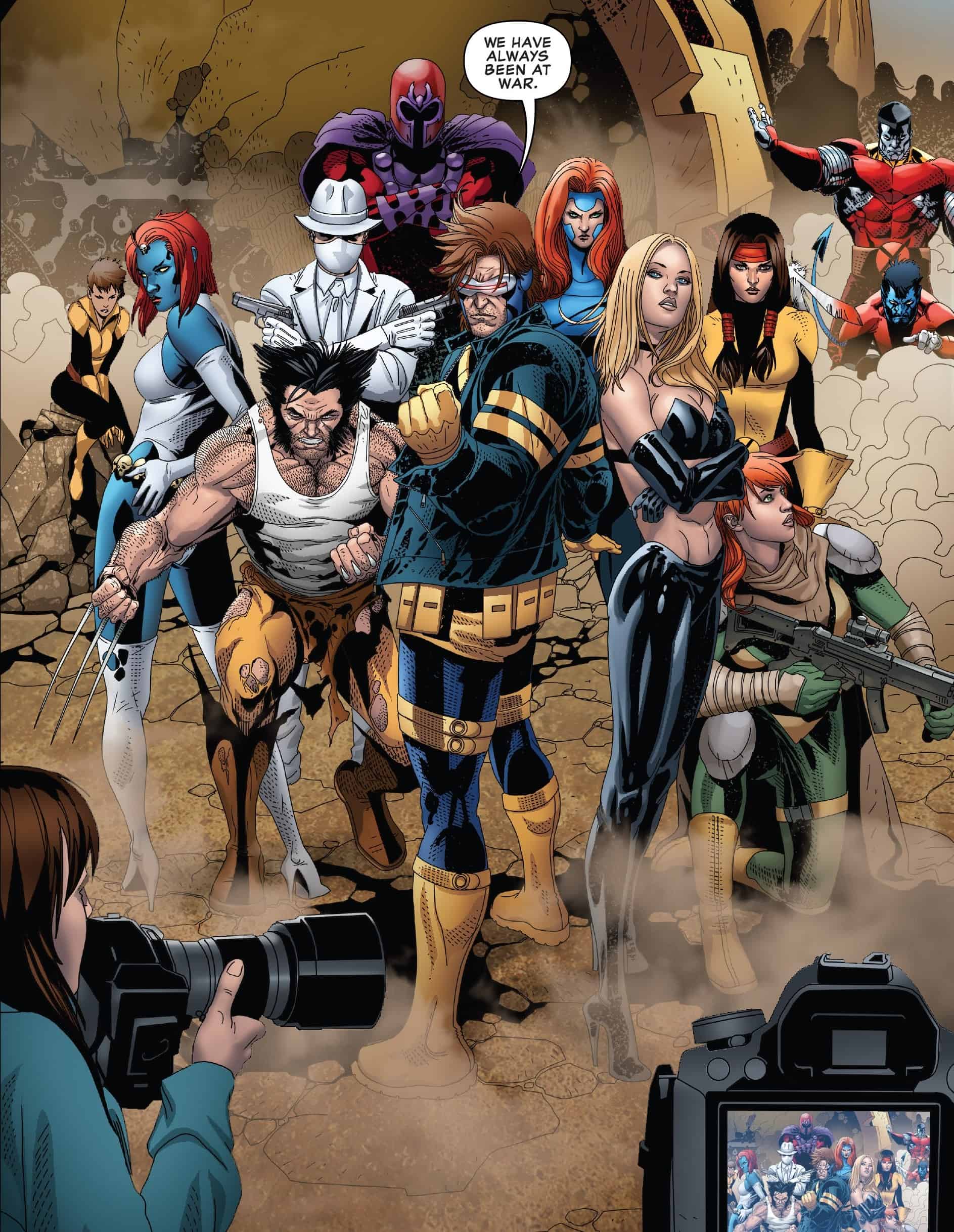 Which brings us to the art. Sadly Whilce Portacio & Erick Arciniega didn’t shine as well as on previous covers, it just wasn’t the memorable final cover I wanted. Similarly with the story art, aside from a few memorable group shots and perfect lines on the determined faces of the characters I didn’t really go for it quite so much as I have before. Which surprised me as I’ve been enjoying the work of Salvador so far. Ever since ‘This Is Forever’ began in fact. Again being as it was for a final issue it could have been a bit more dynamic. The depiction of the kiss alone was problematic for me in more than just the way it was scripted and how it felt crow-barred in. It wasn’t helped visually by the fact the lead up focused on the reactions off Emma and Logan and not those of Scott and Jean themselves. There was no emotional build up, verbal connection, or even any eye contact shown. It just went there. 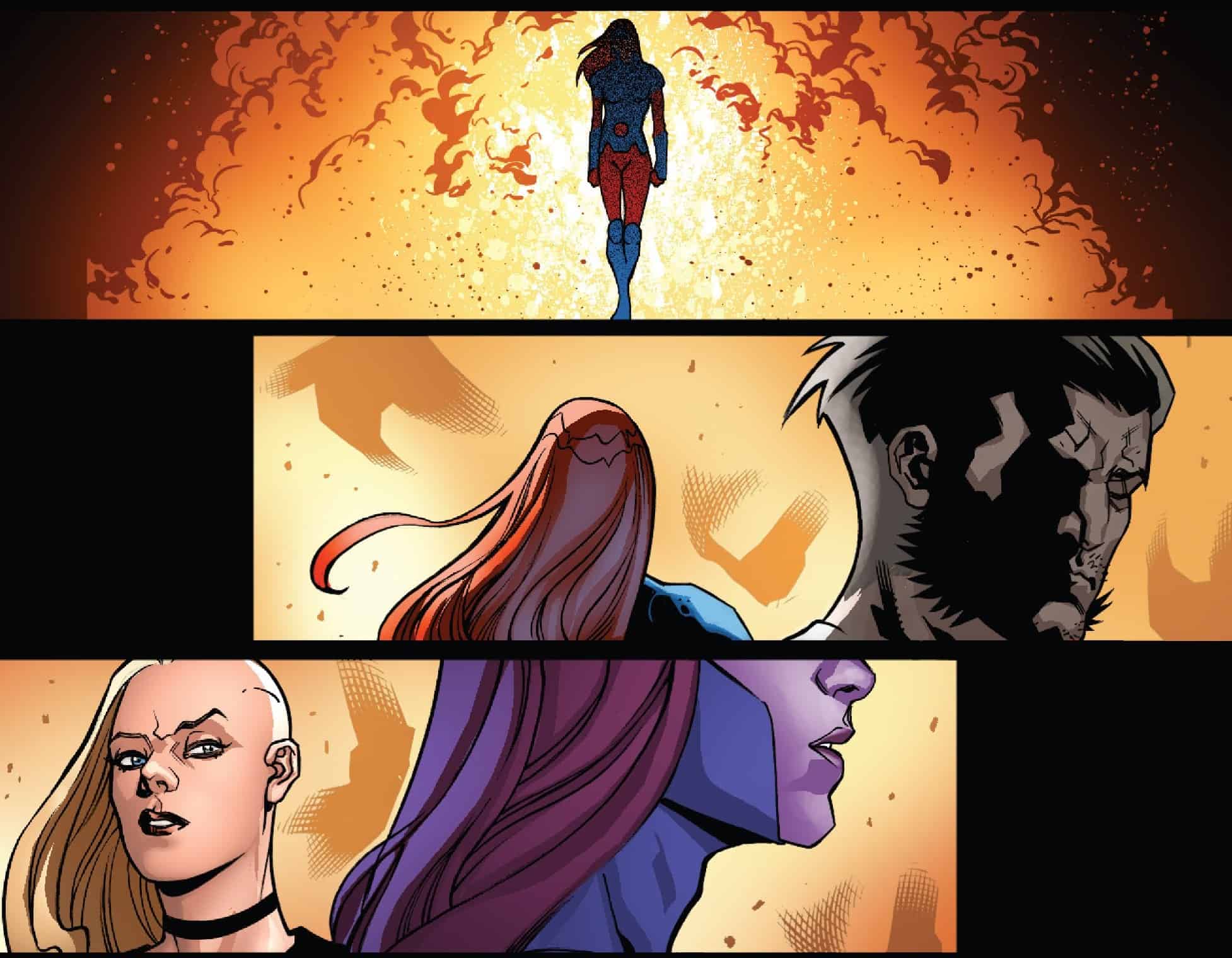 The scene where Dani has a chat with Scott and then runs away also looked a little clumsy and just didn’t flow right to me. Not least because of an overabundance of flying vermin. And during the procrastination of Cyclops when the Sentinel action kicked in and we had the switch to the depiction of the initial fight there was very little feeling or threat, with was no clear delineation of the drama being ramped up. It just… sort of happened. However in the quiet still moments the art otherwise sang out. And there were some shots and images in particular that stood out in my mind and redeemed everything. For instance some stunning close up shots, particularly Alex pre-sacrifice. Most notably his determined expression as he drags his brother out of the doldrums by, well just by being Alex really. 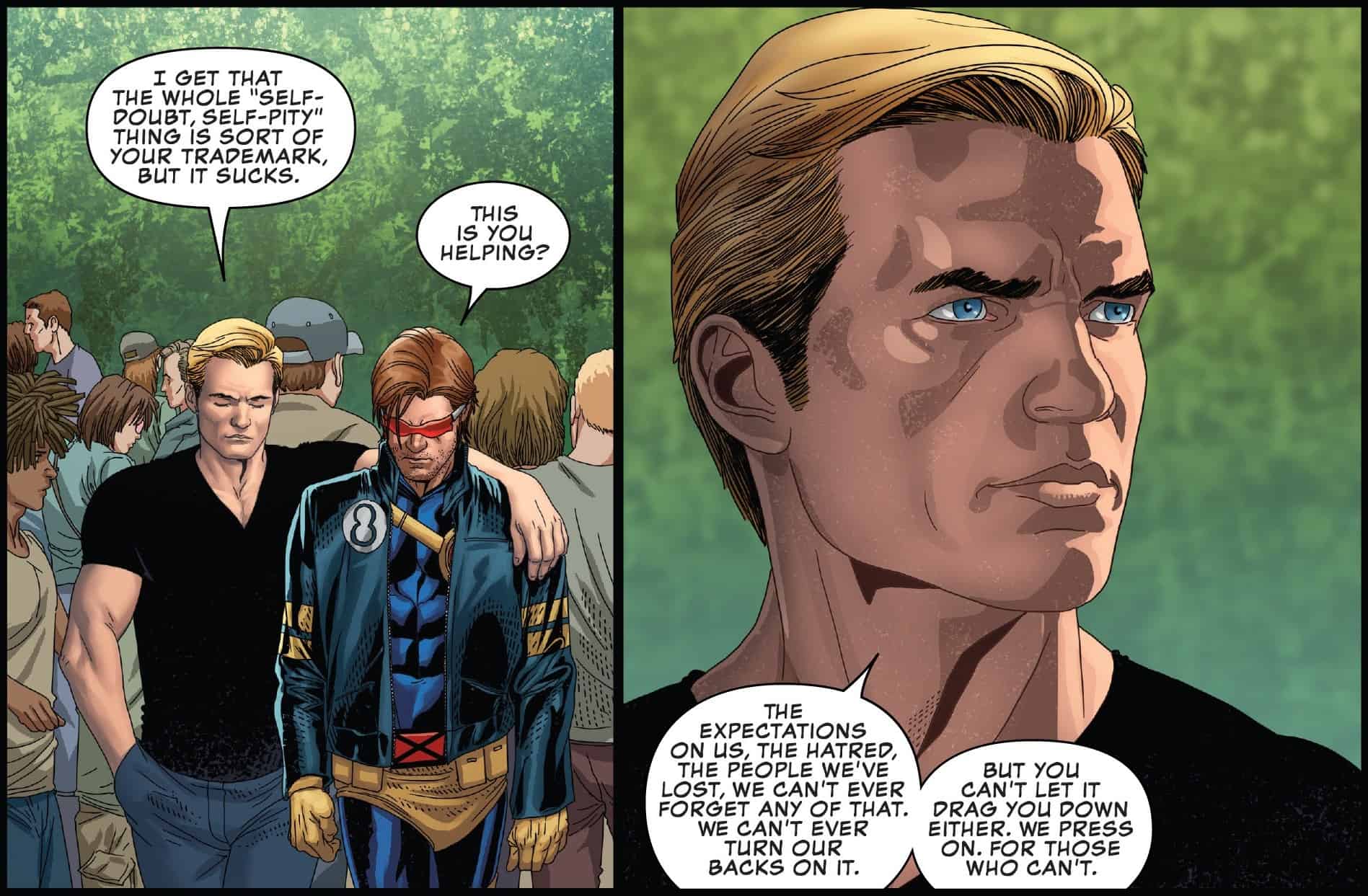 Not to mention then informing his emotional state by letting off a plasma blast to get his point across. And then that final explosion of power, in a scene that at least had more gravitas than we saw in the death of Jono. Facial expression and depiction of the final grouping were similarly flawless and did the job of staging the characters in the scene perfectly well and the line work was pinpoint accurate with every detail standing out. But overall I felt it needed a little more impact, in terms of action at least. The return of the X-Men alone needed to have more grandeur and some sort of “TA-DAAAAH” feel to it. Given we have been waiting for this reveal since issue #10 back when they all disappeared. I really had hoped for a little more, visually speaking. 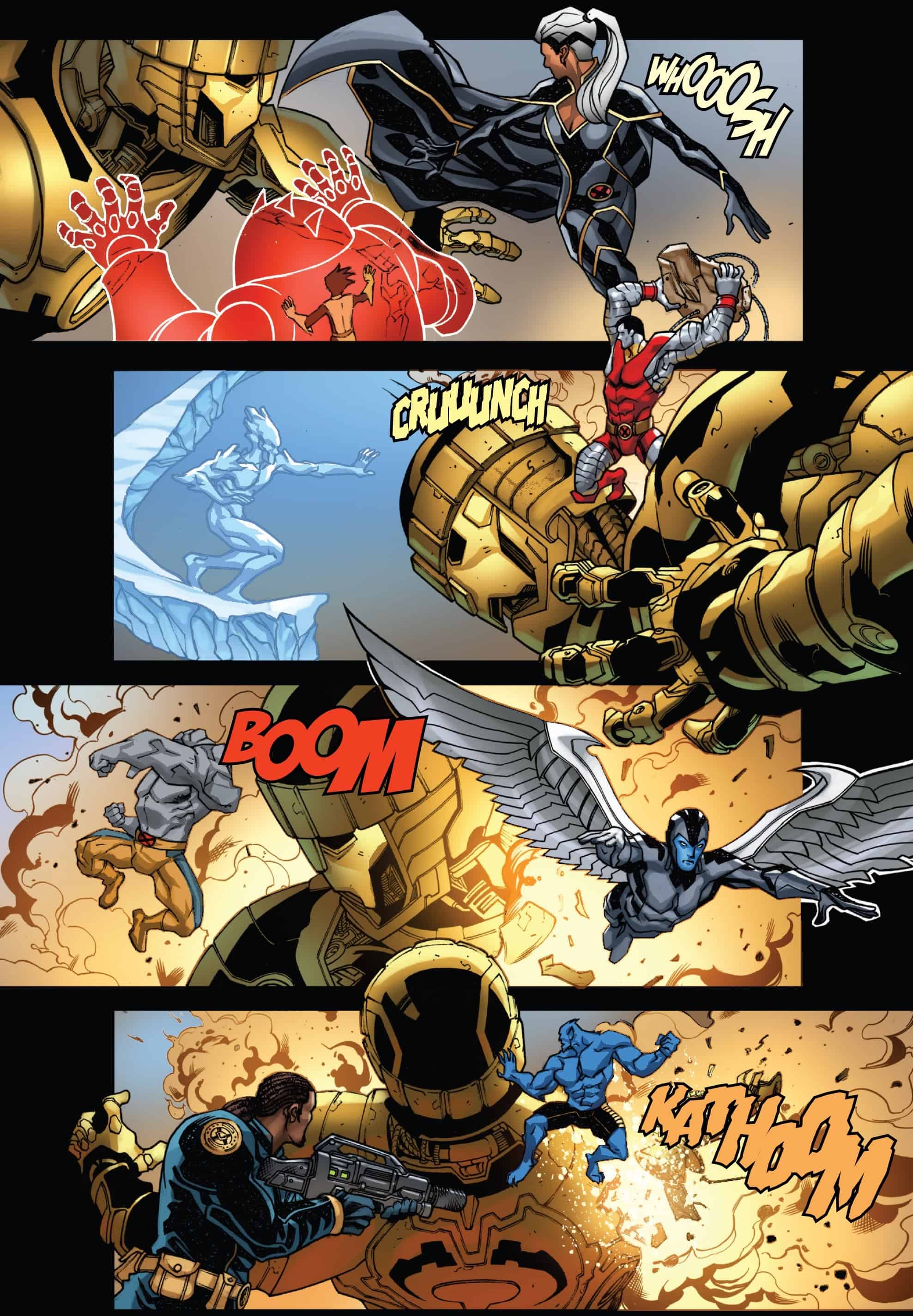 But they ARE back now. It’s been a long hard slog, with some disturbing things happening to the people we all know and love, that haven’t always sat well with some of us. But it has at the very least pushed the boundaries of our perception of what is acceptable in comic lore. As much as we love these characters we don’t OWN them. The writers do and it’s up to them to tell stories that challenge our sensibilities, not pander to us and give us nostalgia, or make the lives of our heroes easy and without tribulation. And I applaud Matthew Rosenberg for not only taking the wheel and putting the pedal to the metal with a grin, but also for not taking us on a tour of the easy side streets and ending it all with “and then he woke up”. He will always be remembered by me for that and for showing us the nightmare of a world without some of our beloved X-Men. But the nightmare is over now. The Dream lives again.

A bit of a mixed bag of a finale. Some disturbing elements with very contradictory consequences. To say it’s been a challenge is putting it mildly. But for those who don’t like it easy it’s been a fun ride.

Uncanny X-Men #22: Are You Not Entertained?