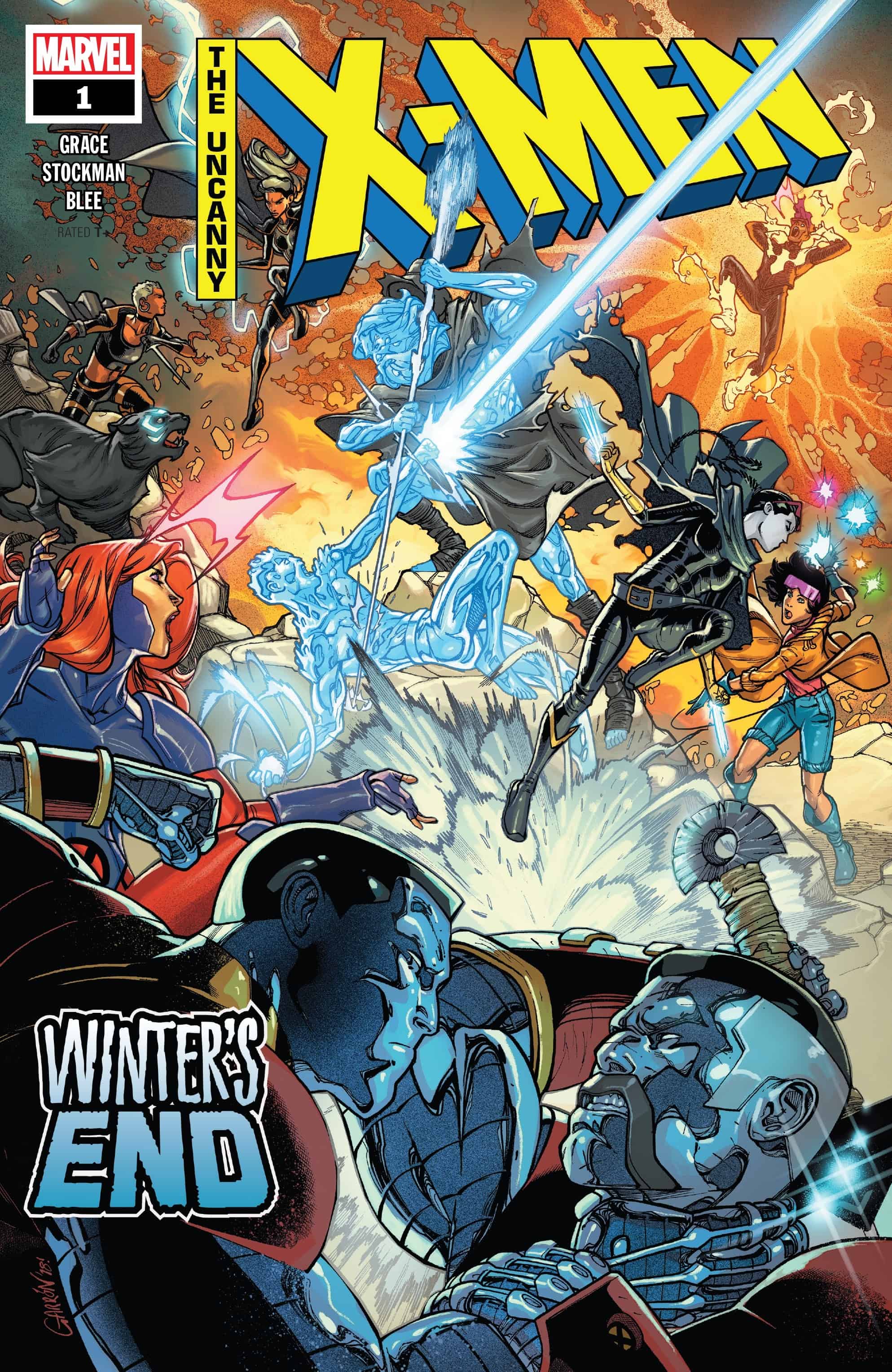 What better place to have an unwanted guest show up than a birthday party, held at the old stomping ground of the original X-Men? A who’s who of the X-Men world is interrupted by the return of Gandalf the Gay, coming back to warn his younger self with his dying breath to avoid interactions with Daken. Instead all he does is cause some old wounds to be opened and confrontation thus ensues. As the dust settles everyone makes up and Bobby accepts a donation from Christian Frost and hands it to the Morlocks to appease any sense of closure we might have already missed. 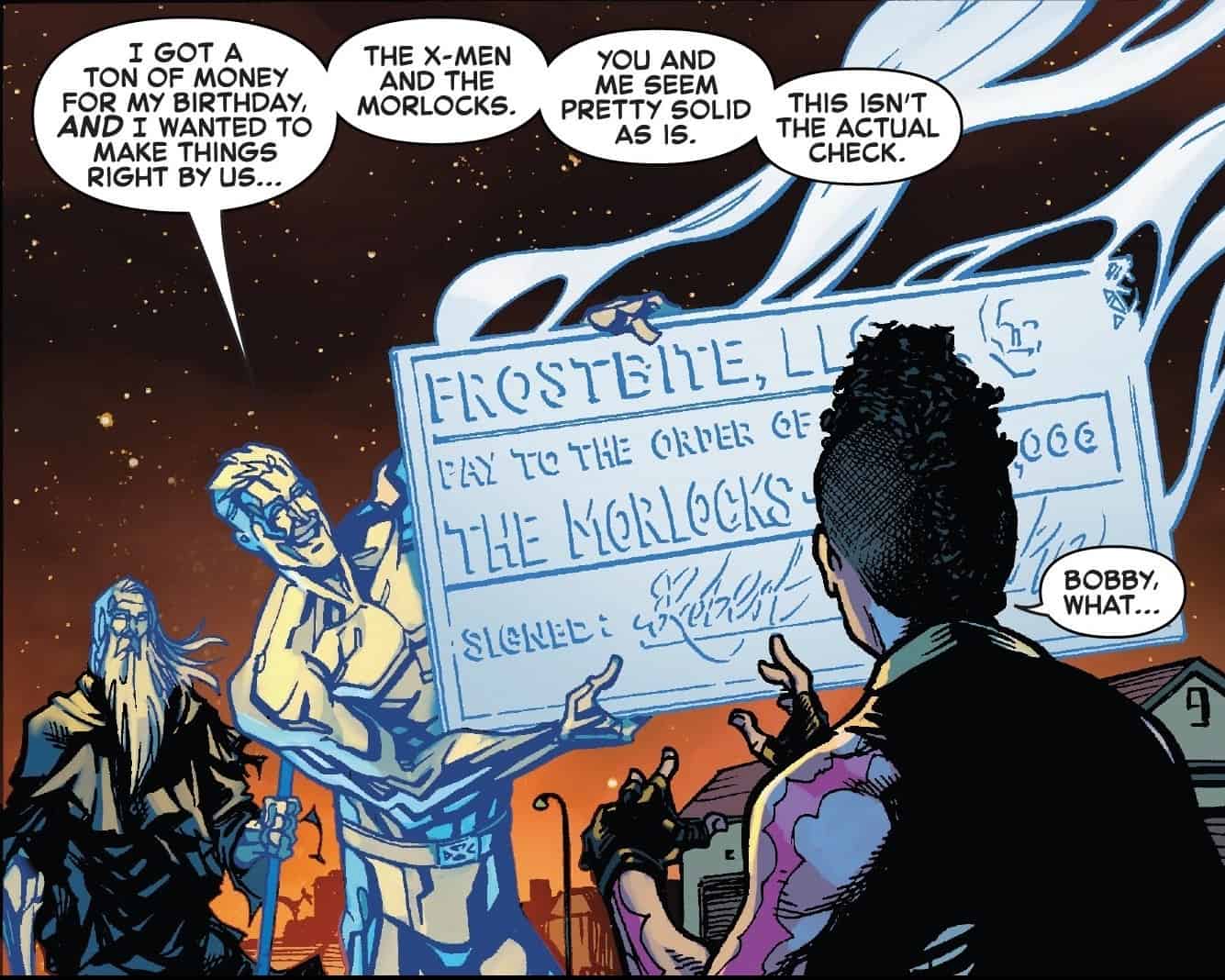 Writing: So basically this is the post script to the Iceman solo series and his birthday party. Not an Uncanny tale. At all. How DARE we assume that something with Uncanny X-Men in the title would be an Uncanny X-Men outing!!! I thought I would hold off doing a review until my sense of betrayal had eased. It still hasn’t. I have since reread the issue in question and still found it wanting. In SO many ways. So it only remains to do the bitter post-mortem. Beginning with WHY we all surmised it would be an Uncanny tale in the first place….well there’s the title of course. Then there is the specifics of the logo itself. It hearkened back to the annuals of 1991-1992. For me this was a solid indication that it was actually a second annual within the same year. Which isn’t far from the realms of possibility given the fact X-Men Gold did it in 2018 *shudders a little at the mere memory*. Still I had high hopes indeed. Especially when you consider the two previous annuals that sported that very logo. 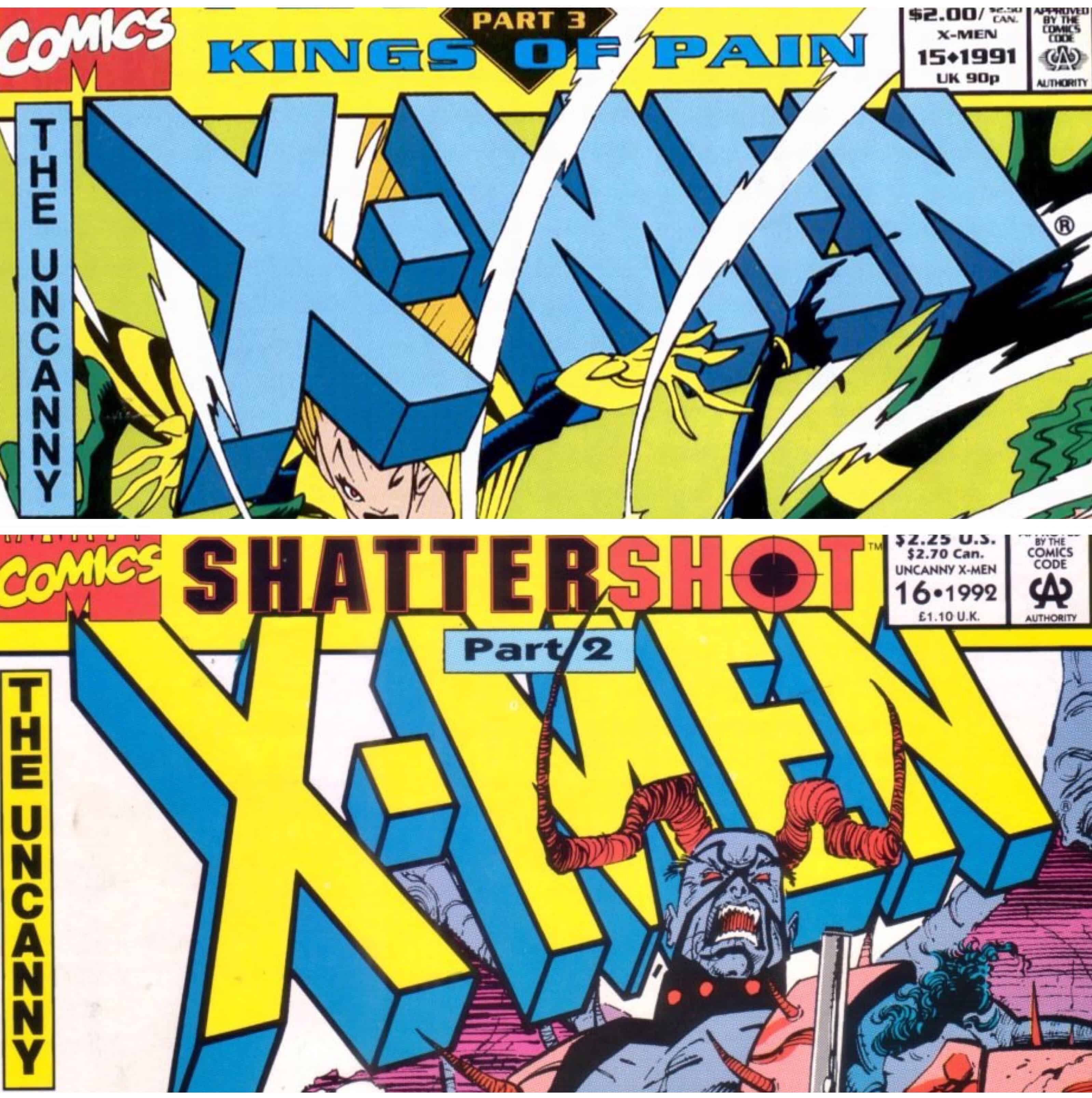 Aside from this there is also the previous issues of Uncanny X-Men that also utilised the text. Not only X-Cutioner’s Song (#294-296) but also Bloodties (#307) both by Scott Lobdell. And of course Alan Davis/Fabian Nicieza’s Magneto War (#366-367). All seminal tomes within x-lore that I hold in high regard. But that wasn’t anything close to what we got. And the fact the story takes place directly before the start of Disassembled does nothing for it either. It barely even comes up to that in terms of quality. As such, for this pretender to even be indirectly hitched to the wagon of Rosenberg’s work, which is currently a phenomenal success, is misguided at best and calculated at worst. It’s true, read the Comicwatch reviews if you don’t believe me. Go on, I’ll wait….The jaded part of me wonders if this was all a deliberate stunt. Of course it was. So lets get to the nitty gritty of the story itself…sigh. Firstly after the obligatory mutant hate from someone Bobby is trying to rescue (totally unrealistic, they would wait til AFTER being rescued to hurl projectiles surely) we have him down tools to head off to the McGuffin of the birthday party, set up to cram as many LGBT faces into the mix as possible. Including Shade/Darkveil, blink-and-you-miss-him Simon, Kyle, Northstar and Christian Frost. Who turns up unrealistically and is made unwelcome in a completely out of character way by Jean and Kitty. Frosty reception much?

In case we missed the introduction, Judah sends a joke present. This serves the dual purpose of confirming it is in fact Bobby’s birthday and also making me glad they are through as a couple. On the subject of gay couples Jean-Paul and Kyle show up, solely to create a timeline and inform us all when this takes place. Oh and Java A Go-Go not Harry’s Hideaway? Rude. And we of course get Bobby’s parents being there for added drama.

Which was again forced. And of no consequence. In fact the whole thing seems contrived to court controversy. Coupled with the meltdown Bobby has on Jean. It was completely illogical. He even says as much to his older self?

And yet he goes on a verbal rampage to deliver some hissy fit gay diatribe and make him seem sassy and catty in a way he normally NEVER is. Although some may say it was warranted and a long time coming I say one thing. Fan-service. Which is kind of how this whole issue plays out. And I’m not even going to touch how out of character Daken is here. So much being done to please so many different factions and shippers. And even some blatant read between the lines comments, which could almost be an attempt to play at subliminal nods and curry favor with people who ship one character or another. Good grief. 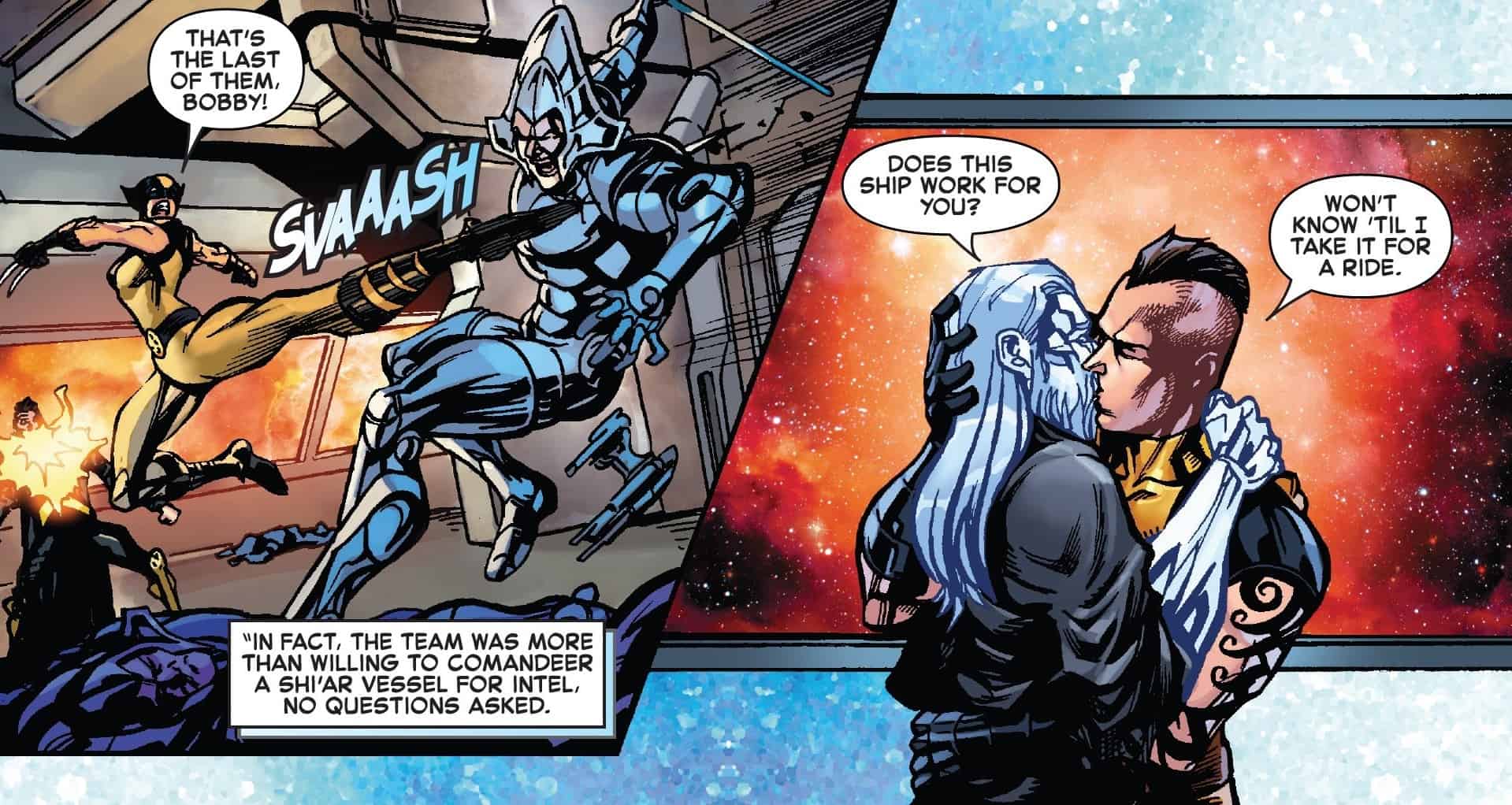 Leaving out the fact that the cover doesn’t reflect the story and neither did the pre release blurb, there is the lack of any real Battle of the Atom characters at all. An interesting look at the future with Daken, Deathbird and co, yes, but inconsequential nonetheless. There were a few sparse touching moments thrown in, such as Torch singing a song to honor their friendship and Evan begging Bobby to bring back his younger self. But again it felt a little crow-barred in, arbitrary and irrelevant. Speaking of irrelevant, Idie and Michaela’s fashion conflab before the party seemed similarly forced. And even Spit Girl’s “TBH/SMH 24/7 you know” ramble was just dumped in there to try and be ‘down with the peeps’. And while having Michaela come to Bobby with her issues seemed on the surface to inform his role as trust worthy teacher, it didn’t really hit home. Like, OMG. 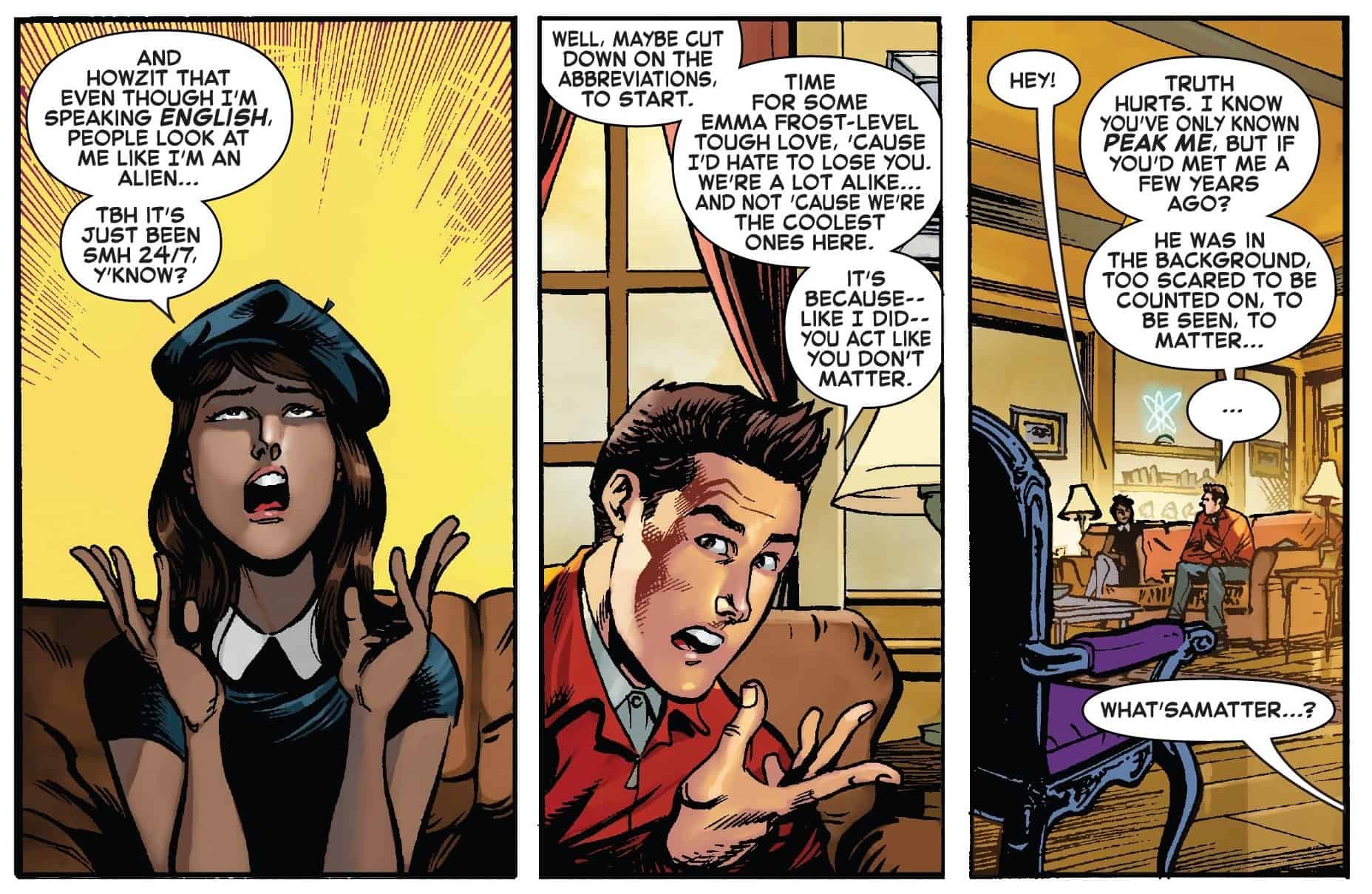 Which finally brings me to Shade…or Darkveil. I am famously opposed to early name changes. Guggenheim changing Kleevus to Kologoth stank of desperation. And the same odour emanates from this one too. Grace seems not to have thought the character through enough to have had faith in the original name. And after realising she caused such a stir, he THEN decided she needed to have a cooler name. Again, it comes off as fan-service. If she was that important to you in the first place Mr Sina you should have either come up with Darkveil sooner or stuck with Shade. Being gay does not give us the right to be so fickle. It does nothing for the world’s perception of our people.

Characters: Everyone was out of character. The end.
Art: The action packed cover that started all the anticipation of the title, coupled with the stunning coloring of Federico Blee could not save this book. Though Stockman’s art in Iceman was passable, it served no purpose to the story here. The out of character personalities were only topped by the disastrous fashion sense of people at the party. Kitty is famously known for her terrible sense of style, we all know this. But Warren in braces? And what WAS Jean wearing? From Simon’s 60’s hair to Rogue, Storm and Gambit all looking like they’d hit the thrift shop before arriving. It was so cringe worthy and frankly made my eyes extremely sore. In case we were wondering, that there is Gambit yaw’ll. We can tell because he’s holding a card *rolls extremely sore eyes*. His sense of self identity is THAT under threat he needs to carry a card round like a security blanket. Really? That’s Gambit, we got Gambit over here people. Ok? 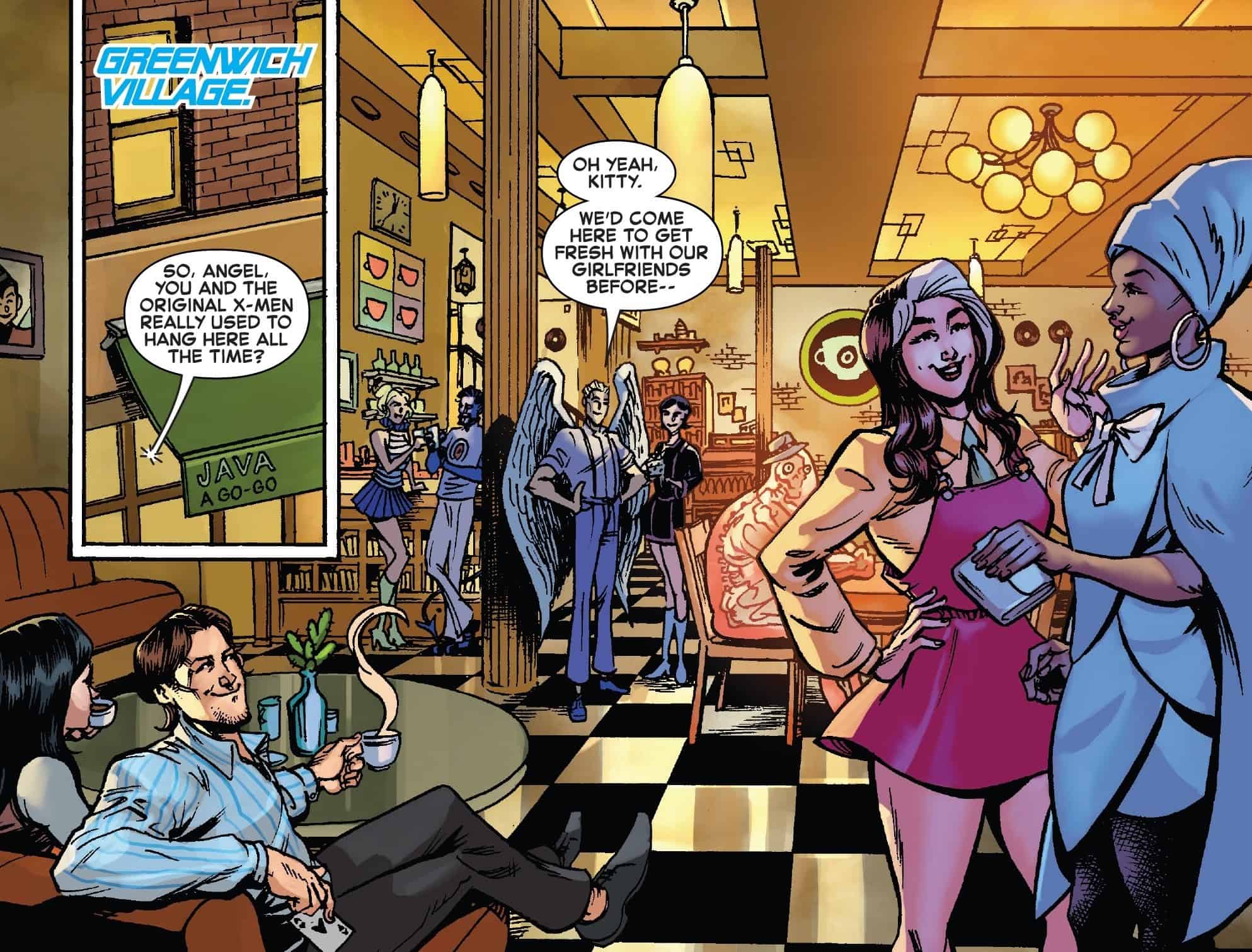 It was all a little too much like trying hard to show them outside the confrontational arena of their adventuring lives without having them play softball. I have to say Thompson and Lopez did it SO much better, showing the X-Men in downtime mode in Mr & Mrs X #6. Relaxed, natural and comfortable. The opposite of this stiff, awkward affair. There was also a lack of promised fan-art? I was so sure that a request was made for people to submit some. And I severely doubt it’s absence was due to there being a lack of submissions. Especially if Twitter was anything to go by. My deeply brutal and possibly overly harsh assumption is that maybe they were too good. 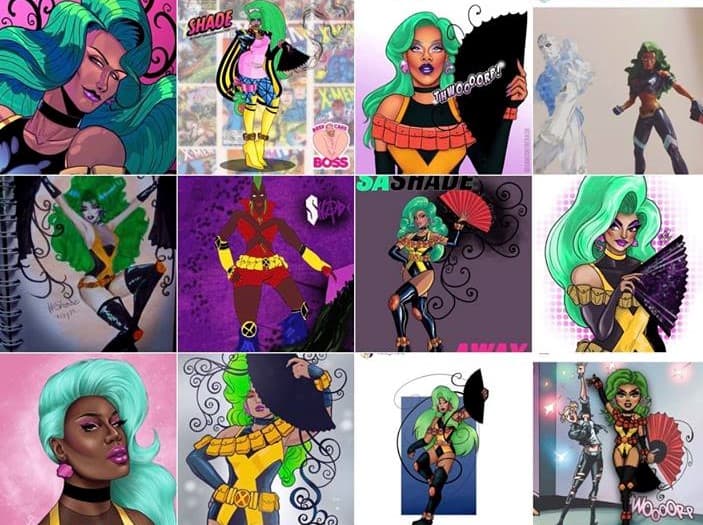 From Uncanny perception to frosty reception. The birthday with so many guest stars. The non event with the BoTA world. All of it empty gesture fan service.