Let’s Be Better Tomorrow Than We Were Yesterday (Uncanny Avengers vol. 3 #28 Review) 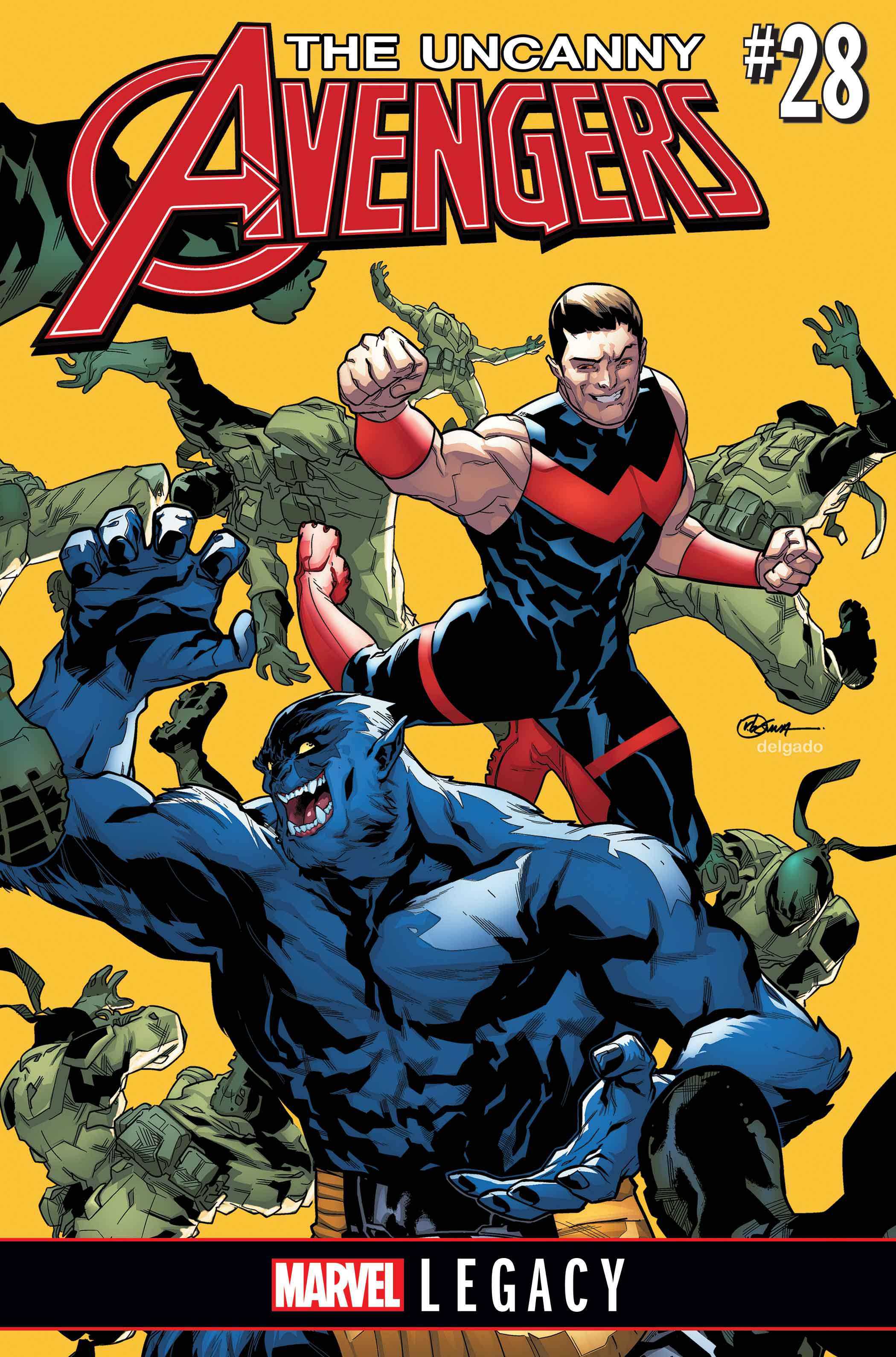 After constant delays, Is the team finally disbanding? Is the Fantastic Four’s legacy in the hands of the Human Torch?
Plus, a reunion between two good old friends, Beast and Wonder Man! Just another ordinary day for the Unity Squad… or is it?

Previously: The team was still recovering from Dark force dimension during the takeover of Hydra-Steve Rogers. Wanda decided to re-join the team before they were able to iron out all their issues. Another supervillain, Graviton, attacked the Unity Squad at the Avengers Mansion. Despite the surprise attack orchestrated by Graviton, the team was able to defeat and subdue him. Just a few moments after Graviton’s defeat, a cab stops in front of the Avengers Mansion and a lawyer came out wanting to speak to the Human Torch regarding the legacy of his former team and family, the Fantastic Four.

The book starts where the previous issue left off. Mr. Hutchley, barrister-at-law, explains to Johnny Storm, the inheritance that Reed Richard’s had left for the closest surviving next of kin. This singles out Johnny, who then decides to discuss things further with Mr. Hutchley after he announced the endowment of a number of Reed’s illustrious patents and its subsequent licensing fees to him. 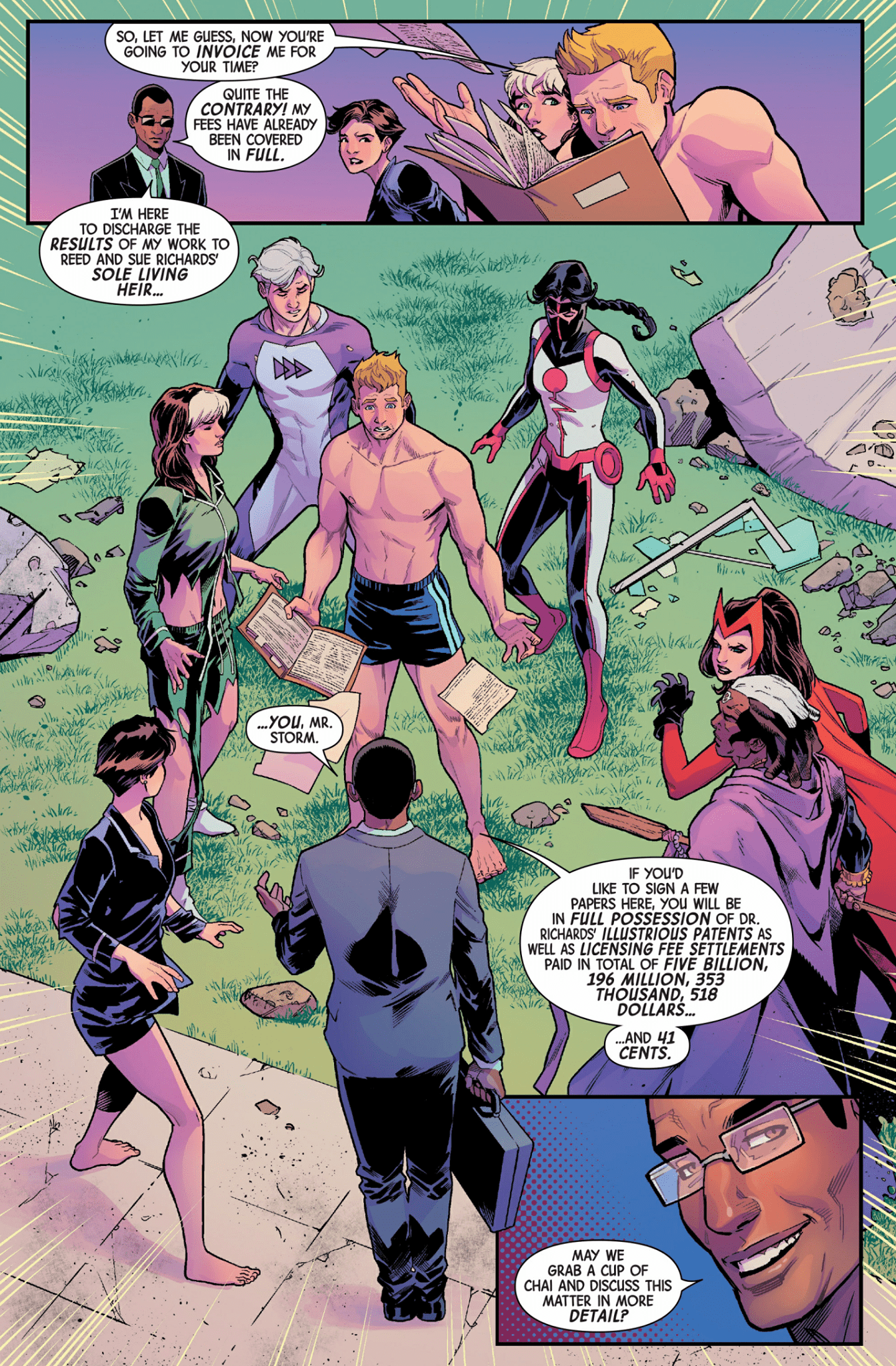 Meanwhile, Beast and Wonder Man meet at a local bar that they used to hang out back in the day. The two reminisce and talk about the screw-ups they had done through the years. Their moment was cut short when they hear sirens and then notice an ongoing robbery nearby. 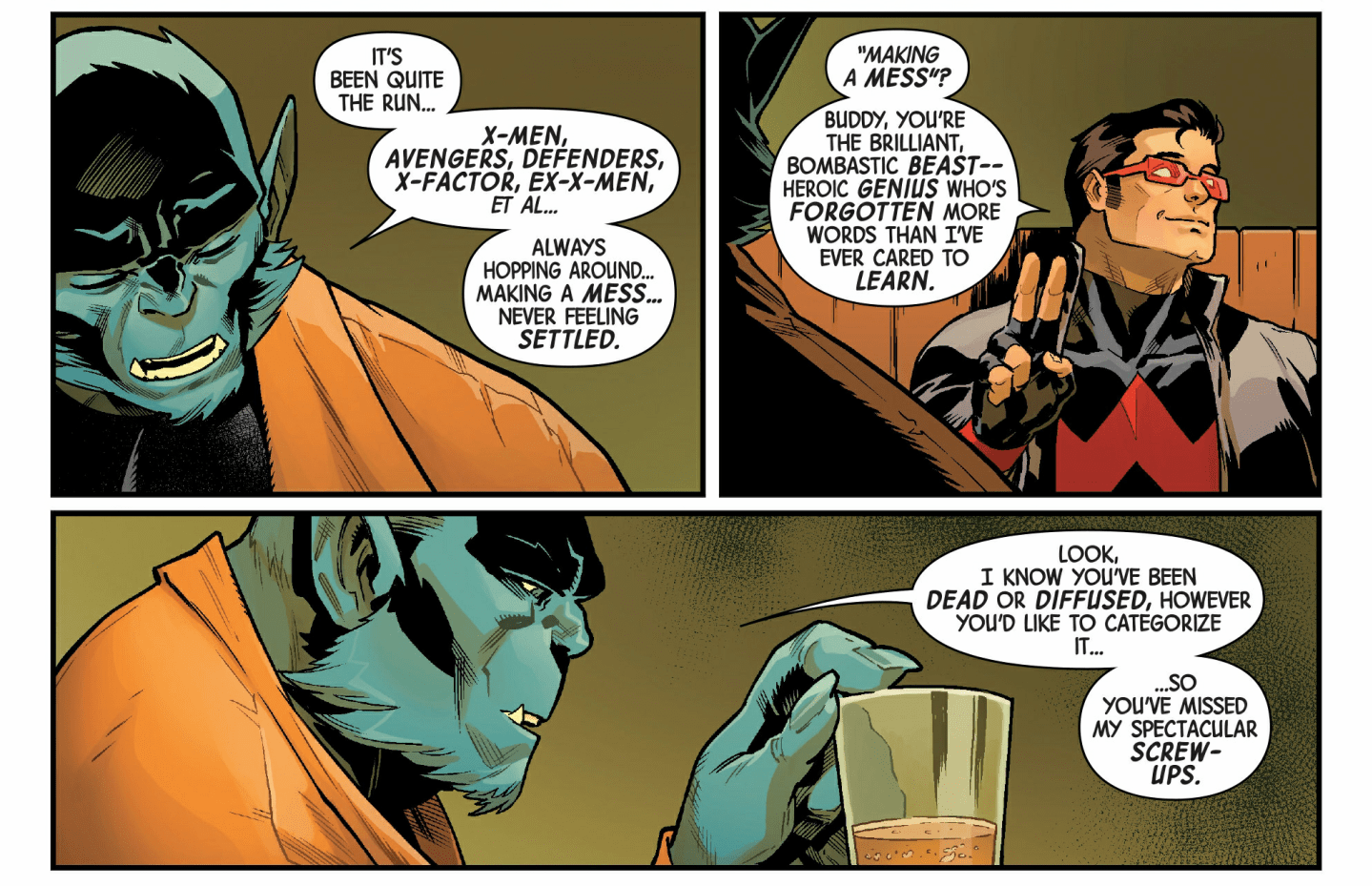 Elsewhere, we see Rogue and Janet having coffee as they wait for Johnny and Mr. Hutchley as they were still discussing taxes connected with the inheritance. The two ladies discuss the future of the team and who should be leading it. Rogue suggests that Janet should lead the team mainly because she was one of the founders of the original group. Janet declines the idea and instead encourages Rogue to be the leader of the team. She argues that Rogue gives the team a purpose and declares her support to the idea.

Back at the robbery, Beast and Wonder Man catches up with the stolen armored car being used as a getaway vehicle. They were able to the defeat the robbers and easily subdue them. After submitting the robbers to the authorities, the heroes then make an agreement to start over fresh and to correct the mistakes they had committed in the past.

Elsewhere, we see Quicksilver and Synapse having a chat about the team as well. Synapse points out that she doesn’t need to read Pietro’s mind in order for her to know that he’s dealing with a whirlwind of thoughts in his mind. Quicksilver then expresses his realizations after all they had gone through. He then tells Synapse that he had missed her and was about to tell her something but was quickly cut off by Synapse receiving an emergency call from Rogue.

Not too long after, Quicksilver and Synapse arrive at the scene of the supposed emergency. Synapse inquires about the reason for calling them out, and Rogue replies that there is no emergency and that her intention is talk about the future of the team. But before any discussion ensues, Dr. Voodoo & Scarlet Witch cast a spell summoning mini Juggernauts (A.K.A. Cyttora) to help them rebuild the destroyed Avenger’s mansion. Quicksilver made no effort to hide his dislike for Magic due to what he and his sister had been through. The book promptly ends with a fully-formed Juggernaut appearing out of nowhere and lunging upon an unsuspecting Unity Squad. 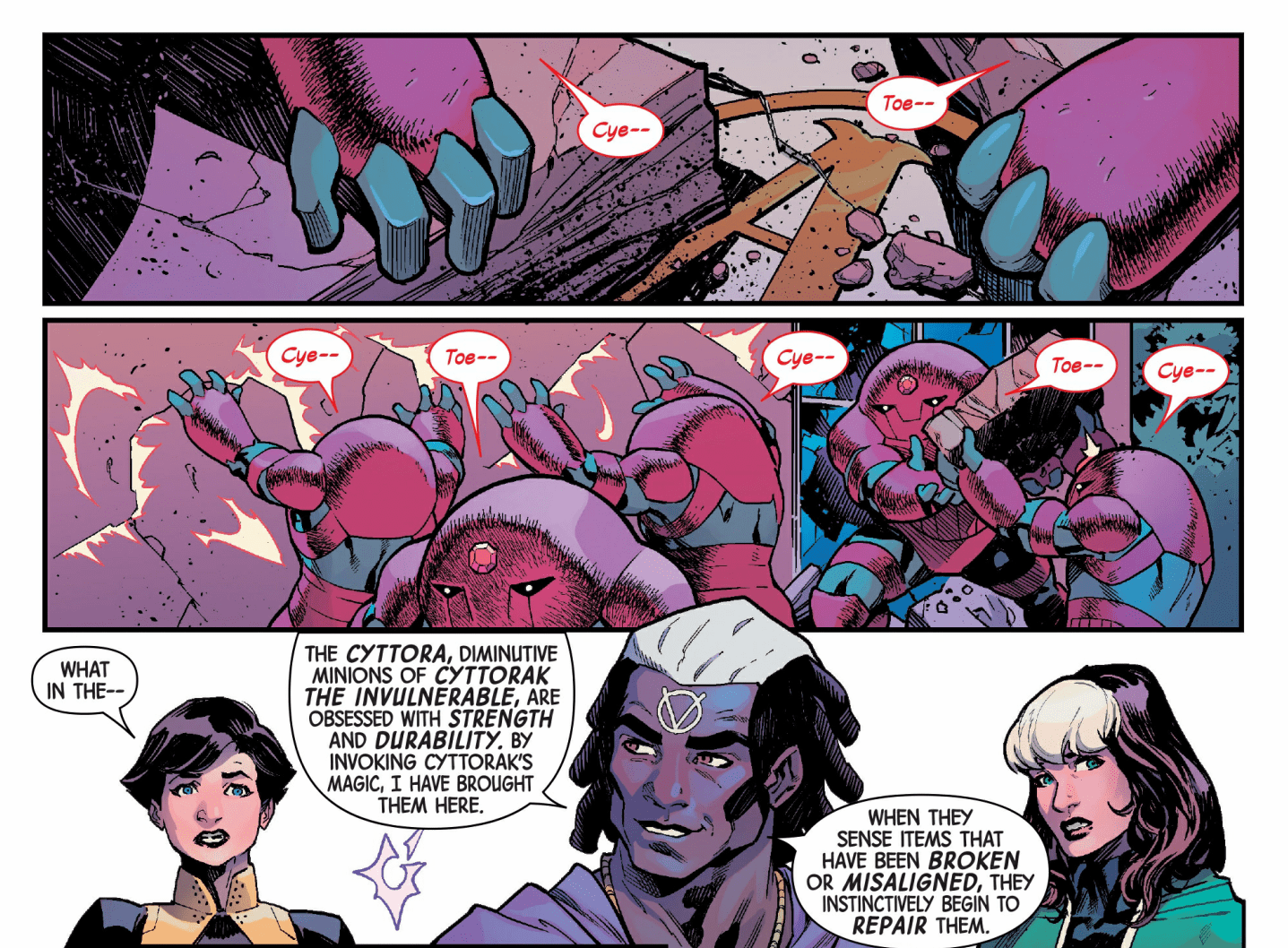 After a couple of issues focused on action and teasing some tension and drama, Zub finally writes an issue to tackle the conflicts and concerns he had built up since he took over writing the book. One main concern he was building up since the Secret Empire tie-in was Rogue’s doubts of becoming the Unity Squads leader. The conversation Rogue had with the Wasp precisely addresses that. Rogue even suggests Janet should lead the team as she was one of the founders of the Avengers. It was also hinted that the Wasp was feeling a bit frustrated at Rogue’s hesitancy on leading the team even though she showed a knack for it during their time inside the Darkforce Dome. It was nice of her to decline Rogue’s suggestion and confessed that she believed Rogue could do a better job leading the team. With Janet’s support and encouragement, Rogue finally made it official and decided to take charge. I kind of agree with this since she has been doing an excellent job leading the team (even though it is was not formal or official) ever since Remender’s time of writing the book. Plus, I think this was the real intention of the whole series, one big Swan Song for Rogue. We all know she’s not retiring yet, but it has been an ongoing tease that the Unity Squad will eventually split up. With the recently announced “Avengers: No Surrender” for Marvel’s Legacy initiative, it looks like that’s how they might end the Unity Squad and Rogue’s time altogether with the Avengers. Another interesting thing to point here is Beast’s admittance to screwing up a lot, with him dragging the younger version of the X-Men and siding with the Inhumans during IvX. Finally! A writer who had written Beast to finally acknowledge how much of a horrible X-Man and Mutant he had been these past few years. Everyone in Marvel was too focused on putting all the blame on Cyclops and Emma Frost back then that they’ve forgotten to address Beast’s screw ups too. The last part I found interesting was the relationship that is building between Quicksilver and Synapse. Now that it was shown on this issue that they seem to be dating, I wonder how this would progress later on especially with Quicksilver’s history and ties with the Inhumans specifically Crystal and their daughter, Luna. Moving on to the art department, I really think Izaakse’s art looks fun and energetic however for some reason, I feel like it doesn’t really match the series as a whole. It could just be me though. The colors by Bonvillain had been consistently good so far, so I have nothing else to say but praise the quality she had provided for the book.

Final Thoughts: Zub finally addresses a lot of questions he left out since he took over writing the book. Throw in a few fun traditional crime-fighting moments by Beast and Wonder Man, the series is able to pick itself back together after losing a little of its identity during Secret Empire tie-ins. All in all, another entertaining story for the Unity Squad.