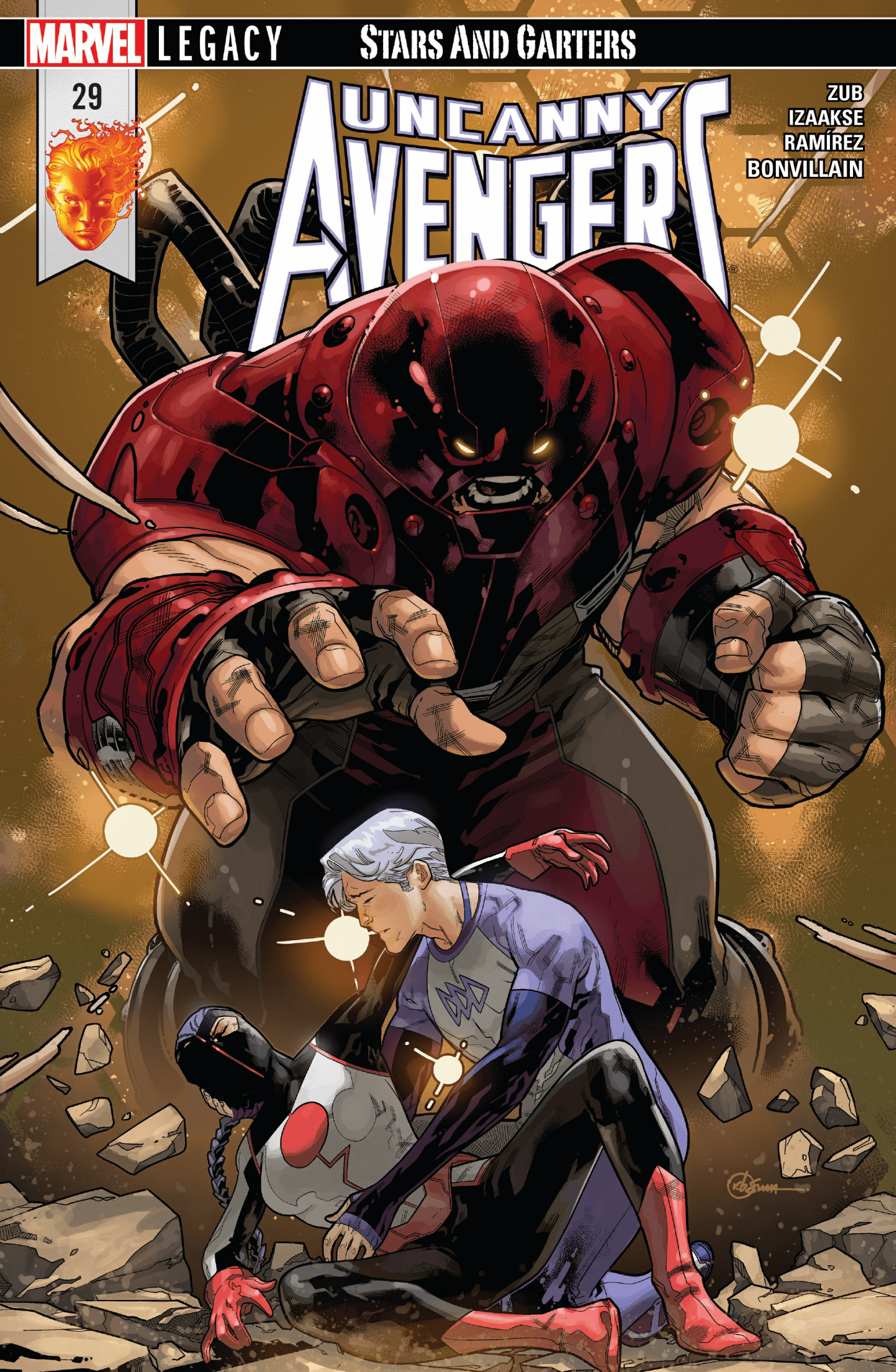 Juggernaut is back at it again! But this time he hits hard!! Is the Unity Squad ready for what is time come?

Previously: Johnny Storm (Human Torch) discussed the legacy of the Fantastic Four. While waiting for Johnny, Rogue and Janet (the Wasp) addressed who should lead the team. The two ladies had also decided to keep the group intact, officially. Meanwhile, Beast is reunited with his close friend Wonder Man and the two have a drink while they lament on the mistakes they have done since they last met. The two buddies then heard a robbery taking place within the area and decided to stop it together. They were able to stop the villains and capture them easily
Elsewhere, Pietro (Quicksilver) and Emily (Synapse) were dating and talked about thing that was on bothering Pietro. The two were then interrupted when they got an emergency call from Rogue. Quickly, the two arrived at with the rest of the team were, at the destroyed Avengers Mansion. Rogue and Wasp announced they had decided to talk about the future of the team. But before anything else they had decided they need to rebuild the Mansion first. Dr. Voodoo and Scarlet Witch then used their magic to summon little Cyttoras which is tasked to fix and rebuild the mansion. While the Unity Squad were watching the little Cyttoras work, oblivious what was coming, the unstoppable Juggernaut suddenly appeared behind them.

What You’ll Find Out:
Juggernaut had been captured is on his way to prison via plane. He was teasing the guards who were assigned to watch over him during the transport. The guards tried to respond back to Juggernaut’s by making fun of how easily Iceman was able to capture the big brute single-handedly. Juggernaut taunts them back by showing them how easily he can escape from detainment. Suddenly he told them he heard something weird and started disappearing before the guards’ eye with him mocking them by saying goodbye. 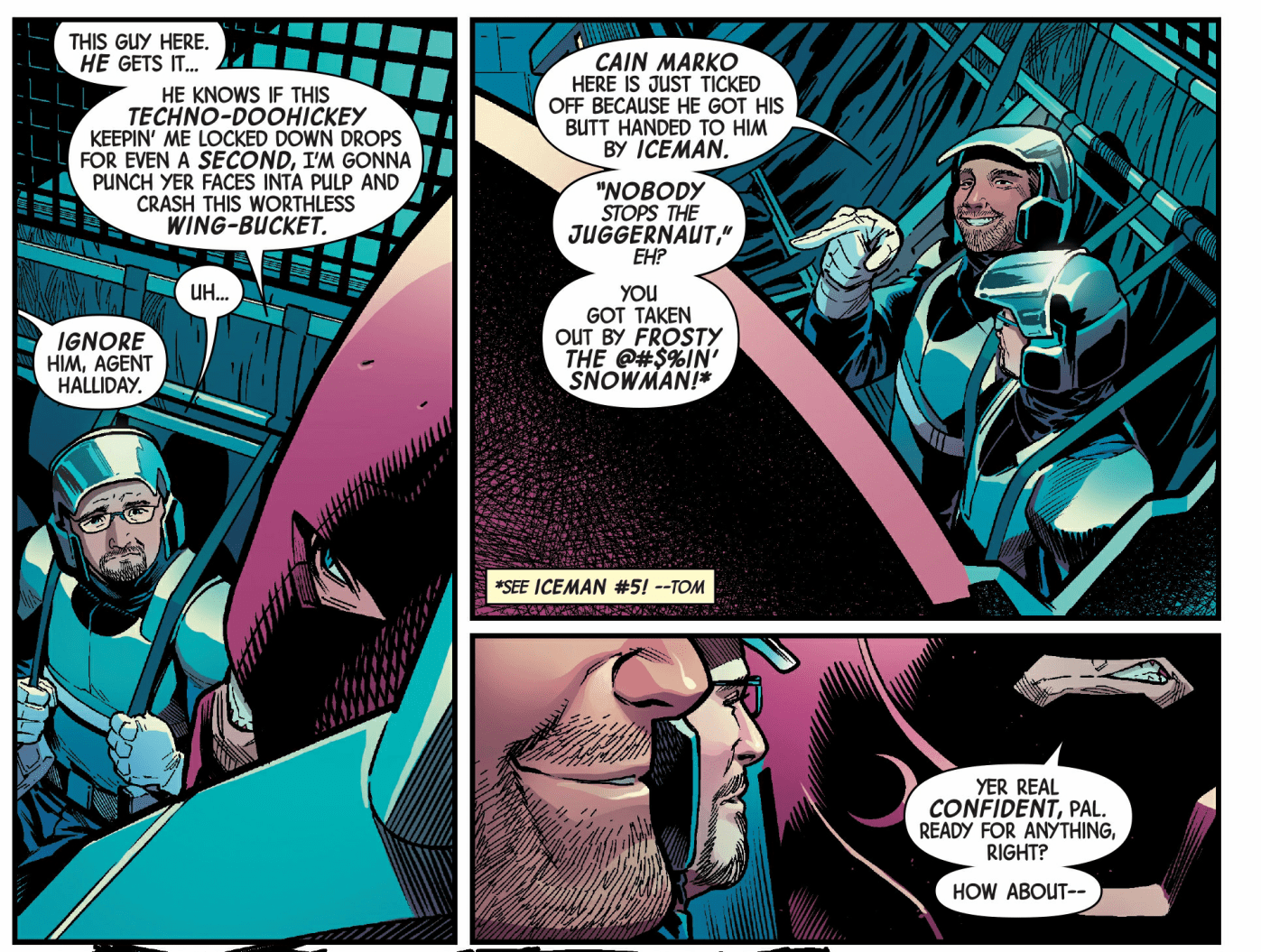 Juggernaut then appeared falling above the Unity Squad, who were unaware and distracted watching the Cyttoras work. Juggernaut took the advantage and attacked them in the process. The team was barely able to avoid the attack and were surprised to see Juggernaut. Juggernaut tried to hit doctor Voodoo and Scarlet Witch but Voodoo was able to block the attack. Scarlet Witch then used her hex powers to fight back. Juggernaut then told her that the power is nothing compared to Cyttorak’s level. He tried to grab her by the head, but Rogue was able to block and threw him away from Wanda. Wasp then asked Rogue what was the plan. Rogue then told them that they needed to lock him down. She instructed Wasp to zip into his helmet and distract him, Scarlet Witch and Voodoo to come up with a strong magic barrier, and Quicksilver with Synapse to keep bystanders to clear and calm.
However, Quicksilver did not follow Rogue’s leadership and carried Synapse towards Juggernaut to defeat him. He told Synapse that all they needed to do was remove Juggernaut’s helmet and have her use her powers to defeat him. Rogue then tried to stop Pietro’s stubbornness and quickly flew after them. Nearby, Scarlet Witch lent a helping hand to Dr. Voodoo who was blaming himself for summoning the Juggernaut alongside the Cyttora. 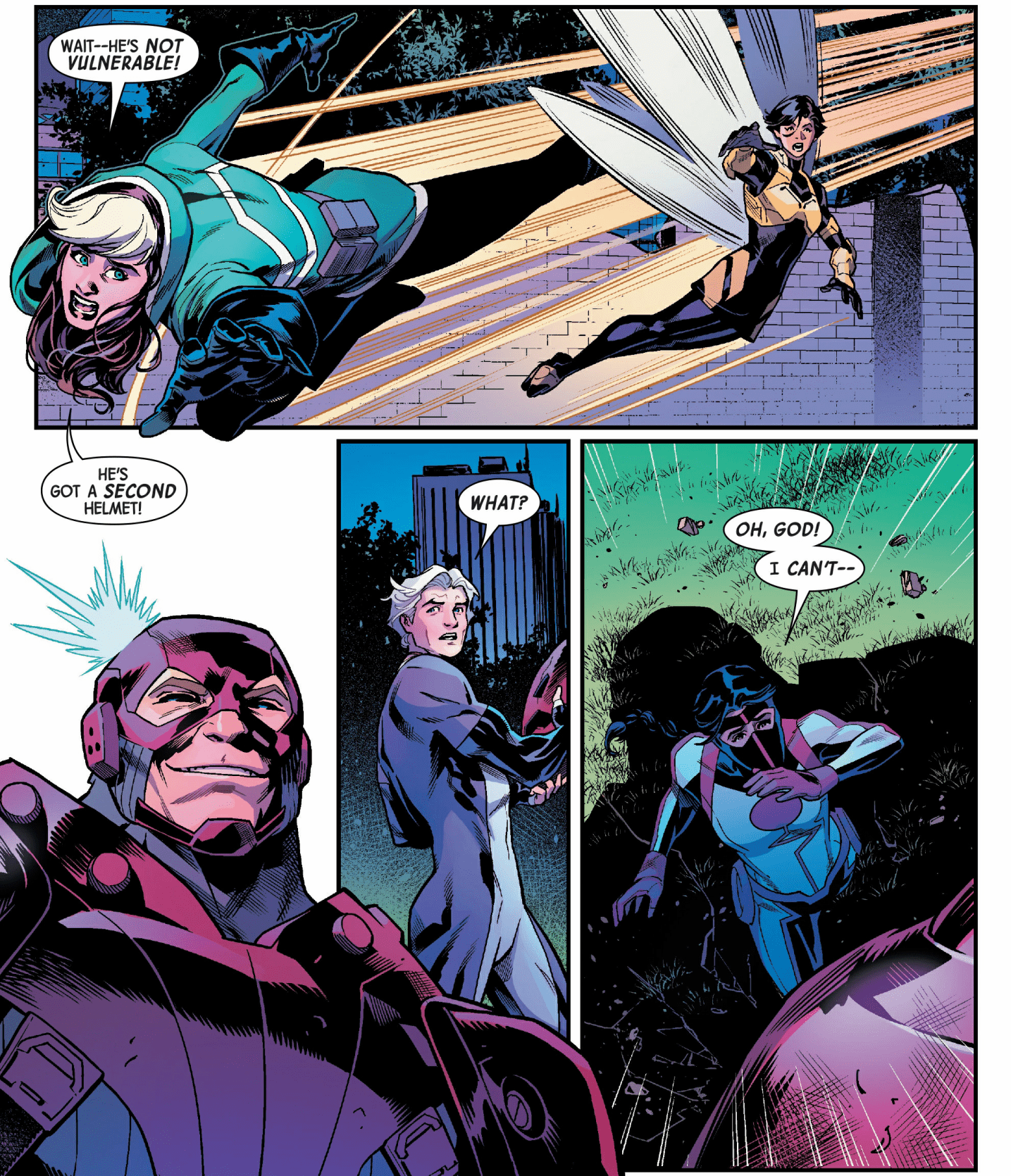 Back at the battlefield, Quicksilver then dropped Synapse near their foe while he ran back and managed to remove his helmet. Synapse then quickly used her power against Juggernaut. Rogue caught up with them and warned them that the Juggernaut now came prepared with another helmet under the primary one. Too late to realize, Juggernaut hit Synapse hard throwing her off away and unconsciously off the battle. Quicksilver furiously went berserk and tackled Juggernaut but bounced back. Rogue and Wasp then tried to distract the Juggernaut. Rogue then used the Juggernaut’s strength by throwing him off the direction he was trying to push her. While the foe was still unable to recover, Dr. Voodoo then used his magic to request the Cyttora to attack Juggernaut. The Cyttora then attacked the Juggernaut and in the processes sealed him inside his own armor. The team then rushed over to Quicksilver who was carrying an unconscious and seriously injured Synapse.
Later at the hospital, the team was the updated by a doctor who informed them that Emily was still alive, the prognosis was stable but her recovery will be a difficult one. They asked the doctor if they could see her but he replied that it is not possible yet and that due to her unique Inhuman anatomy, they would need to transfer her to an Inhuman medical facility. Quicksilver then lashed out at the doctor telling him that he needed to see her. Rogue then tried to stop him but he ended up lashing back at her and questioned her claim of being the team leader. Scarlet Witch then defended the team’s decision of claiming Rogue as the new leader and scolded her brother’s stubbornness and pointed out that it was the very reason that got Emily hurt on the battlefield. She added that Pietro had to accept that fact, atone for his mistake and if ever he is unable to do that then he is not welcome in the team. Pietro hurt, ran away from the group. 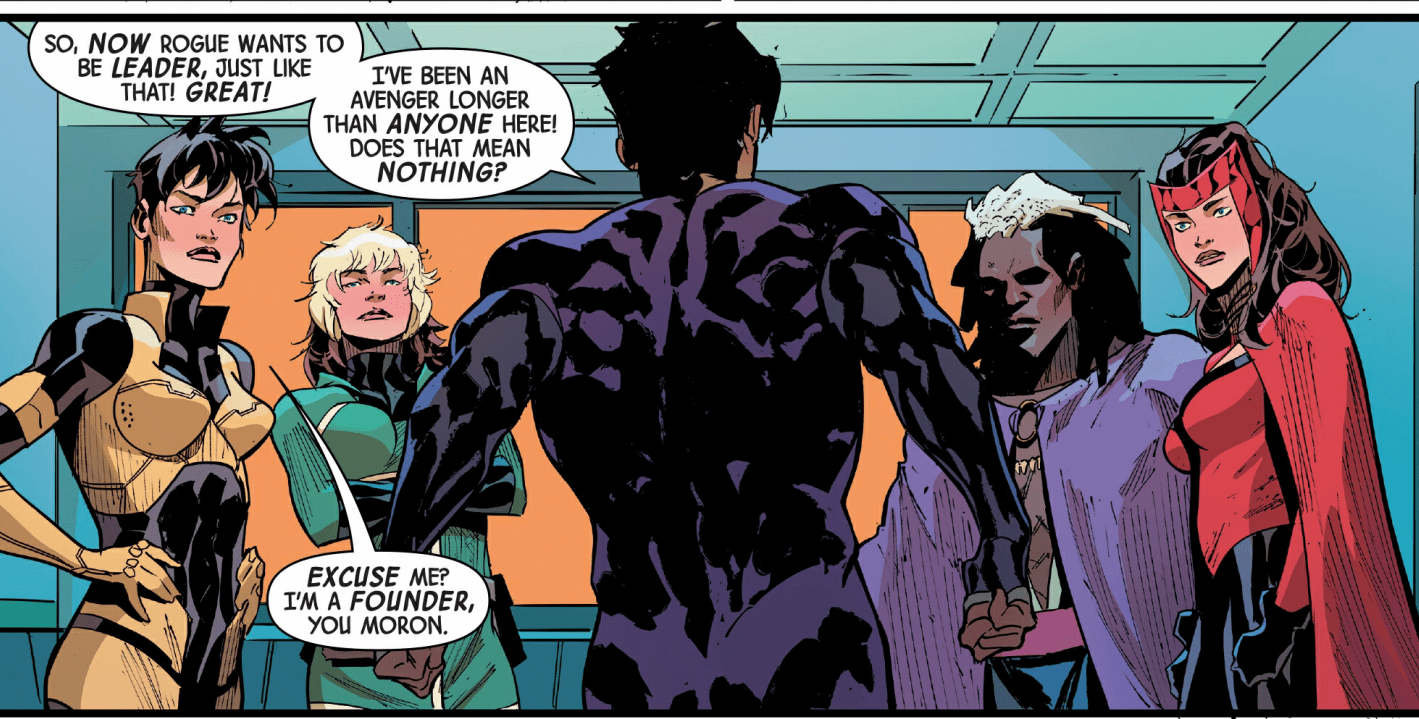 The team then pledged their loyalty to Rogue’s leadership. Rogue expressed her gratitude to her teammates for trusting her to lead. Wasp then asked what was next for them after this unfortunate incident. Rogue then told them that for now, they had to start fixing things.

What Just Happened? I am pretty sure Zub is now incorporating the ideas he really had intended for this book. When he first took over the book after Duggan, it was clear that everything was still mostly controlled by editorial decisions due to the Secret Empire crossover. Now, the book has been consistently fun and is able to regain its own identity. I liked how Zub was still able to connect things within the Marvel universe, by connecting where Juggernaut was previously by adding details that he was beaten by (adult) Iceman back in Iceman vol. 1 issue 5. This makes the Marvel universe more connected and at least consistent, rather than isolating it from other series like they were in a different universe. The next thing I love is that even though it was heavily developed and implied was Rogue taking the leadership role, officially! It started with Remender but unofficially and when Duggan took over, at first it started out like Captain America was taking the lead again but between Inhumans vs X-Men and Civil War II things went badly and Rogers had decided to disband the group. That was when Duggan was developing Rogue taking over as the leader, but unofficially. I liked that Zub has now addressed that very nicely with the Wasp, a founding member of the group gave her blessing for Rogue to take charge of the team. The only thing that did not work for me is the transition from lzaakse’s art to Ramírez’s art. But the good thing though was Bonvillain’s wonderful coloring skills. She had definitely made the book’s colors work consistently well. So well that even with the shift of artists in between this issue, everything still looked and feel consistently in the right place. Unlike other books where when they had 2 artist work on the book, there were usually also 2 colorists which usually made the book look and feel more awkward. It was not the case for this book in terms of the coloring.
Pros:
– Rogue finally and officially taking the lead (and with a founding Avenger’s blessing)
– Bonvillain’s color looked very good on this issue
– Finally, a Juggernaut that is a threat and not written poorly again just being a brute.

Cons:
– The switching of two artists later in this issue did not work well in my opinion (which is minor because both artists still did a good job)
Rating: 8/10

Another entertaining and action-packed issue for the Unity Squad. Once again Zub managed to balance character development and story progression. Uncanny Avengers’ Legacy run has been consistently fun and definitely brought back my faith in the book. Despite the future of the series is unclear, due to the “Avengers No Surrender” announcement, I am still looking forward to seeing where Zub is bringing these characters in the future.