Let’s Find That Future and Make it Brighter Than Ever (Uncanny Avengers vol. 03 #30 Review) 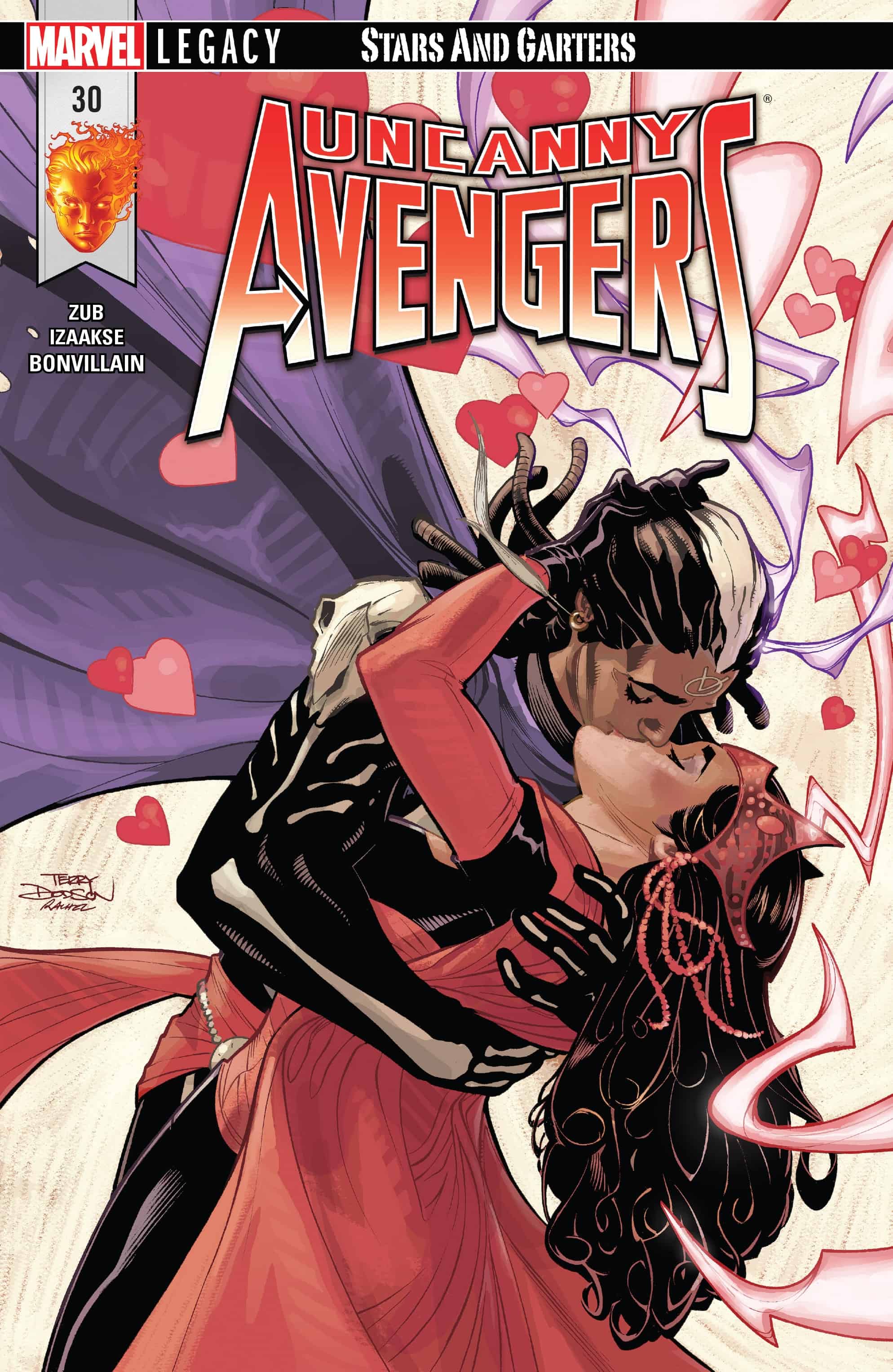 Dr. Voodoo and Scarlet Witch summoned the Cyttoras, little Cyttorak minions who were helping them rebuild the Avengers Mansion. Unfortunately, they had also summoned the supervillain, Juggernaut. Caught off guard, the Unity Squad fought back under the leadership or Rogue. Quicksilver got hard-headed, and did not follow Rogue’s leadership and carried Synapse near Juggernaut in attempt defeat him the old school way by removing the fiend’s helmet and have him telepathically defeated. However, their attempt was unsuccessful because Juggernaut wore the second helmet underneath his main one. He hit back and almost killed Synapse in the process. This angered Quicksilver and fought back in rage. The rest of the team also fought valiantly while Dr. Voodoo was able to cast a spell for the Cyttora to attack Juggernaut. The Cyttora were able to defeat Juggernaut. The team then rushed Synapse to the hospital. Luckily the doctors were able to inform the team that Synapse will survive, but, she will need to be relocated to an Inhuman hospital. Quicksilver then lashed out at the team for what had happened and also pointed out his frustrations of Rogue taking the lead. This angered Scarlet Witch and answered back at him, citing that it was his hardheadedness that almost cost the life of Synapse. Hurt by her words, Quicksilver realized that his sister was right, and left the team. Scarlet Witch, Wasp, and Dr. Voodoo then pledged to follow their new leader. Rogue was touched by her teammates trusting her and told them that they will need to start over and start correcting their mistakes.

Simon (Wonder Man) met up with Wanda (Scarlet Witch) at the park. The two rekindled their relationship and talked about their current status after the events of Apocalypse Twins’ Ragnarok. Wanda shared that during the time Simon psyche was absorbed by Rogue, she went on a soul-searching journey to find herself and her connections with magic. She said that she had realized a lot of things and it changed her perspective, that she found a new path. In the end, Simon knew what Wanda was trying to say. That their rekindled romance was also the end of it. Wanda said that she still loved him, however, Simon said he was not yet ready to talk about it and left Wanda. 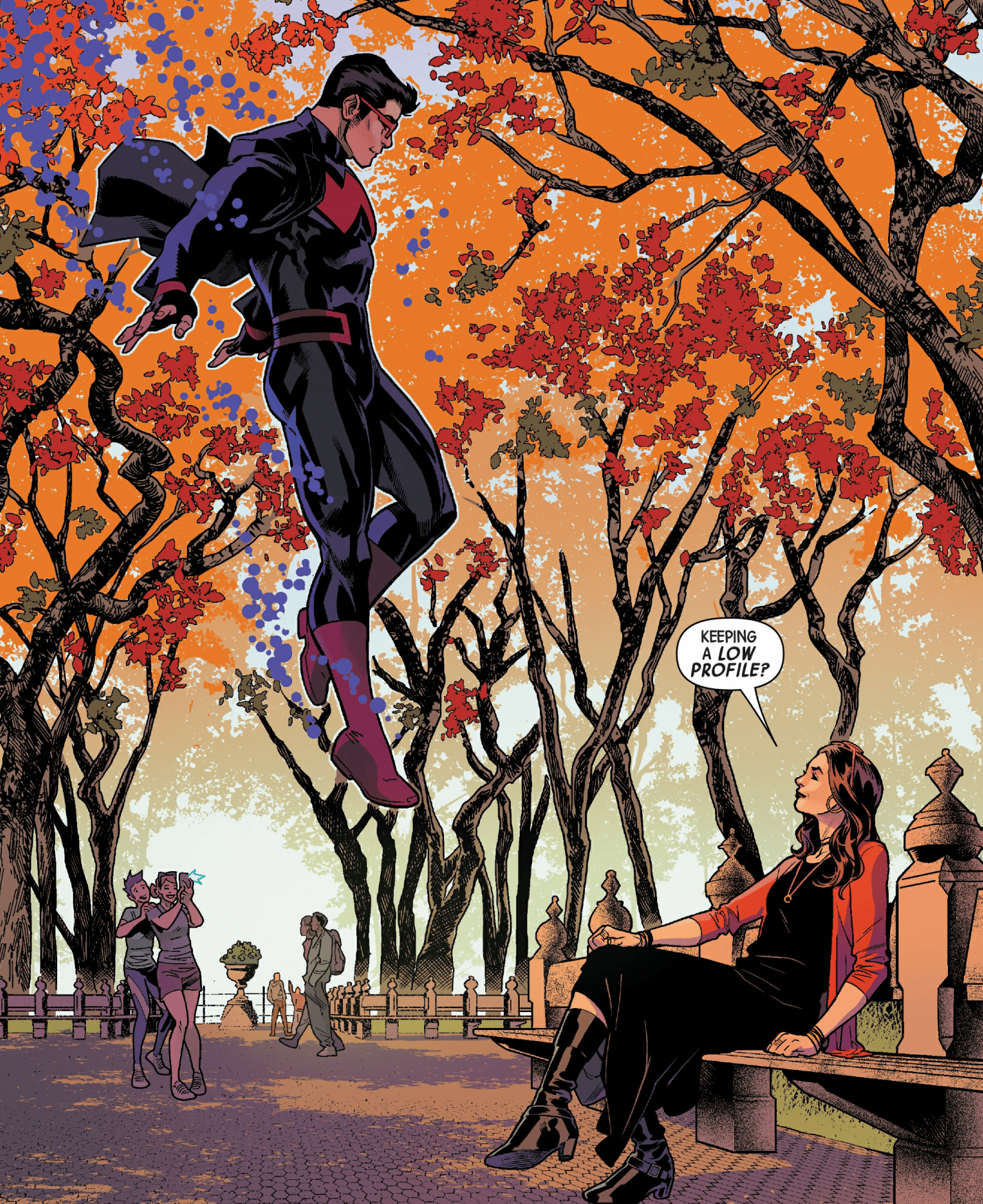 Meanwhile Rogue and Johnny Storm (Human Torch) flew around New York. Rogue expressed how good it felt to fly. They then hang out on top of one of the buildings and Rogue asked how was Johnny was feeling. He replied that despite not feeling low due to the wealth he inherited, he didn’t want to think about Sue or Reed and that he did not want to shoulder the burden of their legacy. However, he also knew he couldn’t escape it. He had to decide what to do with the money he acquired from the will. Rogue opened up that she had no place to decide for Johnny. But Johnny said that he already decided what to do. He brought Rogue someplace familiar and surprised her that he had donated a portion of the money to rebuild the Avengers Mansion. Rogue, who was surprised and ecstatic, hugged Johnny to thank him. 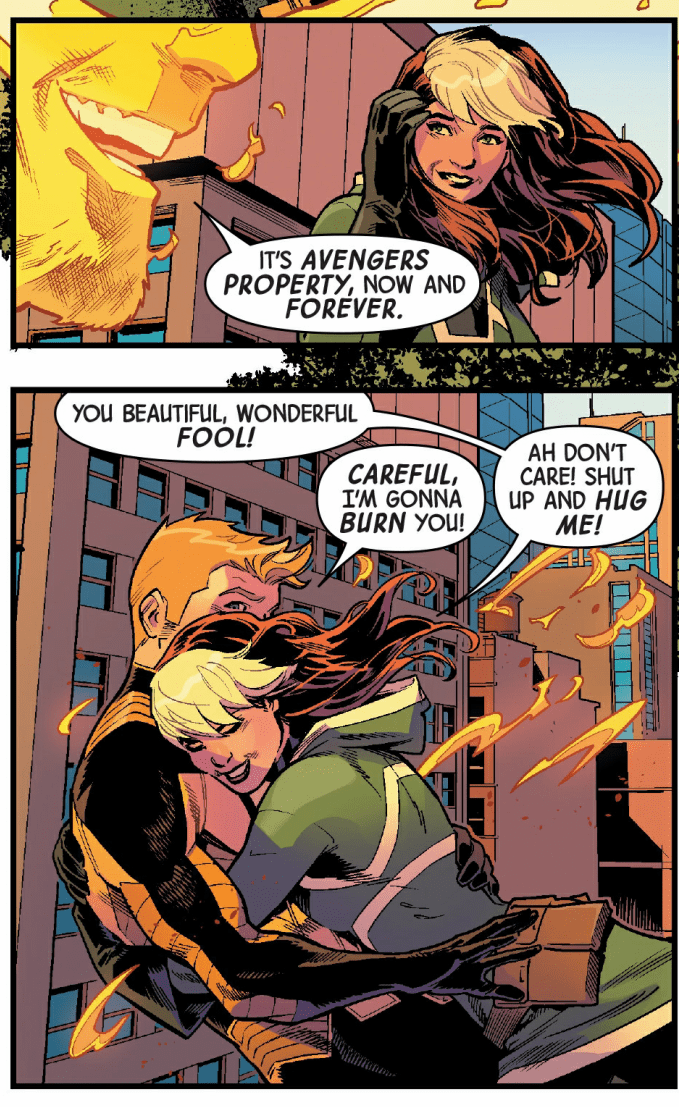 Meanwhile, Synapse woke up from her coma and saw that she was now in an Inhuman hospital. An Inhuman doctor told her that she is recovering very well. She then had a visit from one of the volunteers at the hospital. It was Hellion of the X-Men. He thanked Emily for saving his life from the M-Pox during the Inhumans vs X-Men war. He then handed a letter to her coming from Quicksilver and gave her time to read it alone. In the letter Pietro wrote for her, he poured out a heartfelt apology for the recklessness that almost caused her life during their battle with the Juggernaut. 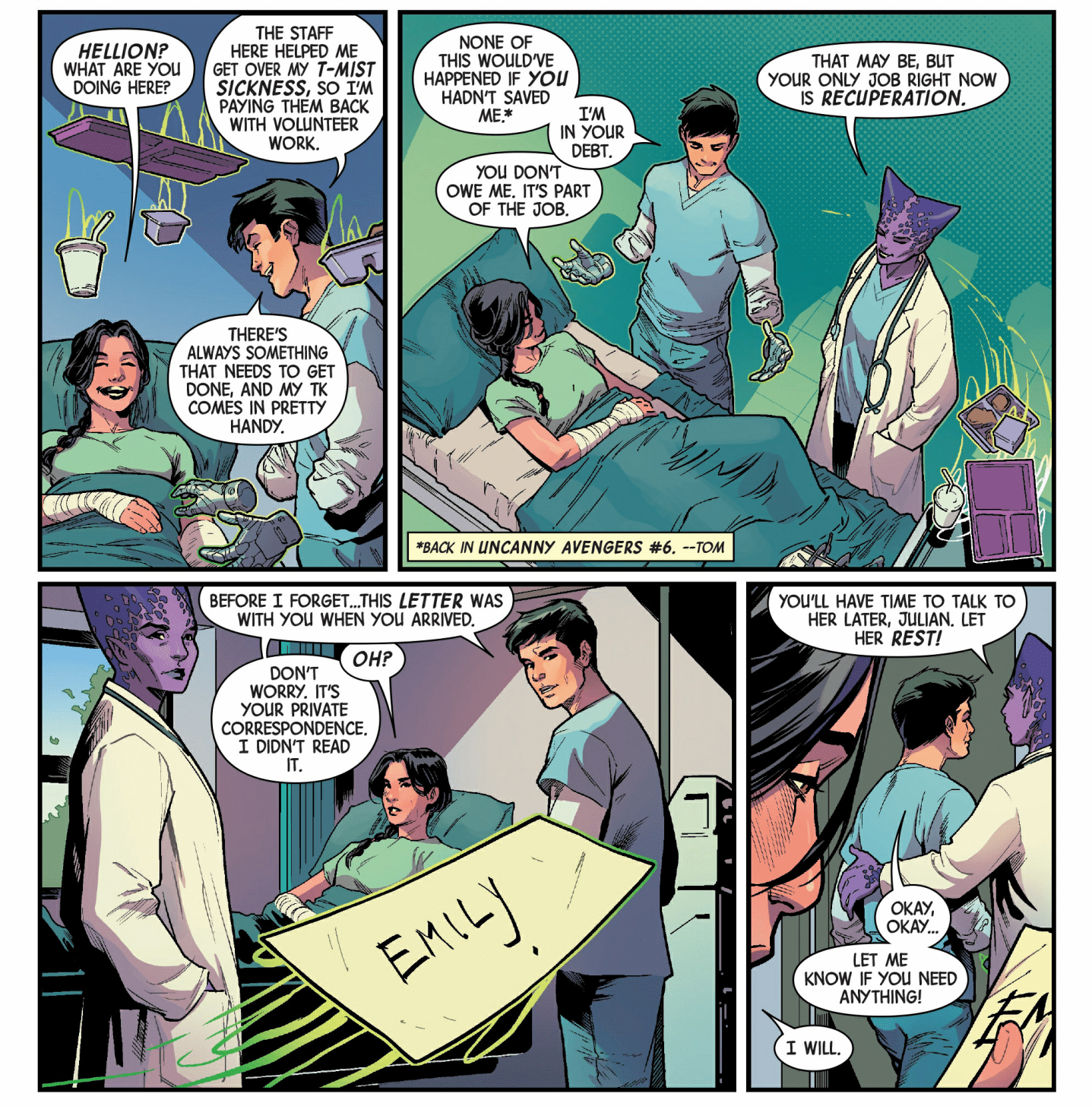 Elsewhere, Dr. Voodoo interrupted Scarlet Witch’s meditation. Jericho asked Wanda how Quicksilver was and she replied that he is better than expected given the circumstance. Jericho then talked about how meditating can help implying it would help Pietro during his soul-searching. Wanda then told him that it was not only Pietro that needed that, she told Jericho about the conversation she recently had with Simon. About her finding a new path based on her new perspective of balancing duty and desires. She suggested that Jericho try it as well. He asked how and without hesitations Wanda kissed Jericho passionately. The two then agreed that they would like to walk their paths together, Wanda citing that it was a first for her to be with someone who is also related to the Mystic Arts. 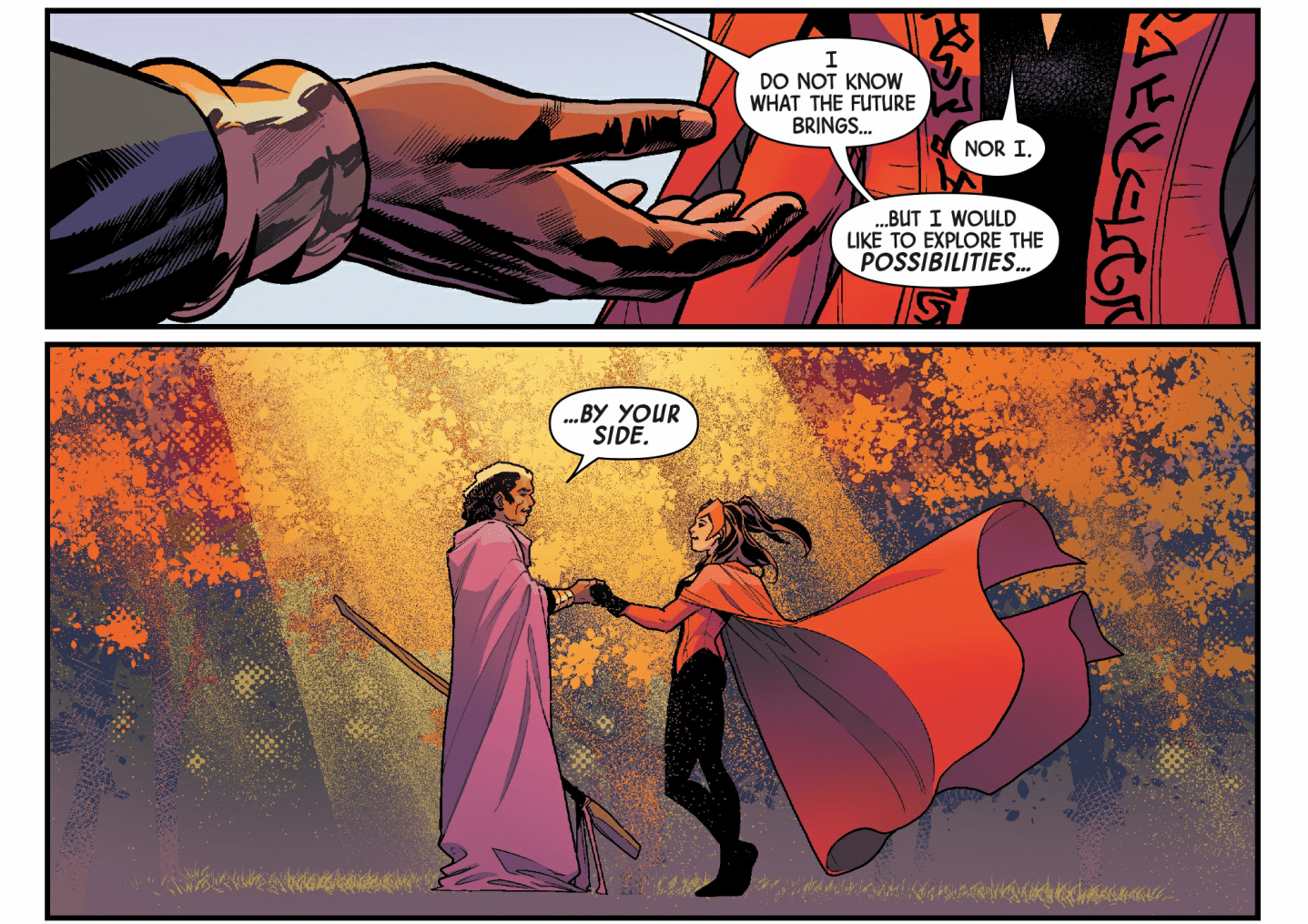 Elsewhere, Rogue attends a court hearing for the Shocker, Herman Schultz as a Character Witness. She told the Judge and everyone else in the courtroom the heroic deeds that the Shocker had done, fighting bravely alongside her against the Monsters during the time New York was under the Darkforce dome. Her statement also surprised Herman in a good way, hinting that Rogue’s statement sparked a heroic side for Schultz. After giving her statement she waved goodbye at him and left.

Rogue then arrived at the Avengers’ Mansion where she was approached by the Wasp, Janet, who told her that someone very important wanted to talk. It was Captain America, Steve Rogers, himself. He apologized for what had happened during the Secret Empire event and asked if Rogue could trust him again, which Rogue accepted his apology. Captain America then asked her to rejoin the Avengers. Rogue refused the invitation and told Captain America that rules and charters don’t make one an Avenger, never had and never will. She added that banding together and fighting for what was right was what being an Avenger really stood for. So she promised that if she ever they are needed, they’ll come and answer the call, but the condition was that they will have to do it their own way. Captain America accepted her conditions and discussed plans to find the future they long for and will make it shine brighter than ever. We then see the whole Unity Squad celebrating each other’s company, behind the original Avengers monument. But for some reason, everything looked and felt off…

This was the last chapter for the Unity Squad before things fall apart on the upcoming Avengers’ major cross-over “No Surrender.” First thing I would really like to applaud would be the gorgeous coloring by Tamra Bonvillain. I cannot stress enough how much vibrancy and life she had poured out for the book. Examples were how she captured the mood and matched it perfectly with the setting (i.e the autumn colors during Scarlet Witch and Wonder Man’s conversation at the park.) Also during the scene at the Inhuman hospital, you can feel the calmness and sad tone of the color blue that Tamra was able to set during the time Synapse woke up until the part she read Quicksilver’s letter.

Next would be the amazing art Izaakse has done for the book. I will admit that I had to adjust to his style back in previous issues. However, his art worked wonderfully, beautifully crafting the different scenes and moments these characters were experiencing. He was able to deliver strong emotions through expressive facial expressions and body language. It helped that Tamra Bonvillain’s colors fit his art style perfectly too.

Now for the story, I really loved how Zub was able to address some of the unanswered questions like Scarlet Witch’s relationship between Wonder Man, and Rogue being Shocker’s character witness during his trial. The way Zub interweaved each and every character’s relationship in the book felt natural. I still feel that the book lost it’s identity or the reason behind the team’s name “Unity Squad” considering that the only mutants left in the team are Rogue and Beast. But I’m glad Zub was able to add in some guest starring X-Men like Hellion when he was providing care and visiting Emily (Synapse) as a volunteer at the Inhuman hospital. Another thing I enjoyed, which I mentioned earlier was when Rogue volunteered to be a character witness for the Shocker. It’s a great character development if ever this was the starting point for the Shocker’s heroic life, I mean really, It’s about time. I am looking forward as to what direction they’re leading the Shocker in the future. I do hope that they do not retcon this development.

At the end of the day, I really think the creative team did a wonderful job to end another chapter for the Unity Squad and also tease us with the upcoming major Marvel Legacy title: Avengers No Surrender Saga. It’s bittersweet that the series had to end but I know It’s definitely not the last time we’ll be seeing the Unity Squad together.

Final Thought:
Jim Zub managed to fill in a lot of the gaps between the characters developments and the plot since he took over. With the amazing job from Izaakse and gorgeous coloring from Tamra Bonvillain. This book is definitely a must read and beautiful way of ending another chapter for our Unity Squad.