Undiscovered Country #1: Come, Get Lost with Me (Spoiler-Free Early Review)

In this special oversized first issue, readers will journey into the near future, and an unknown nation that was once the United States of America—a land that’s become shrouded in mystery after walling itself off from the rest of the world without explanation over thirty years ago. When a team seeking a cure for a global pandemic breaches U.S. borders, they quickly find themselves in a struggle to survive this strange and deadly lost continent!

Every so often, a comics series will come along in which the level of passion and care from the creative team positively wafts from the pages within. Undiscovered Country is such a series. From the opening pages, the issue is captivating on every level, from the dialogue to the color work, from emotive and detailed pencils and inks to the carefully places letters. There is no single facet of this project that feels like a paycheck but rather ever panel has the feel of a labor of love.

The United States of America, 30 years removed from the global scene, plays host to an adventure series that defies genre. The anticipation of the diplomatic team’s entry into US airspace is palpable and what follows is a genuinely intriguing mix of action-adventure, psychological study, and sheer, abject horror. In the post-script, written by Snyder, the author recounts the origins of the story as the result of running with co-author Charles Soule and getting lost in the world, finding inspiration in unexpected places. 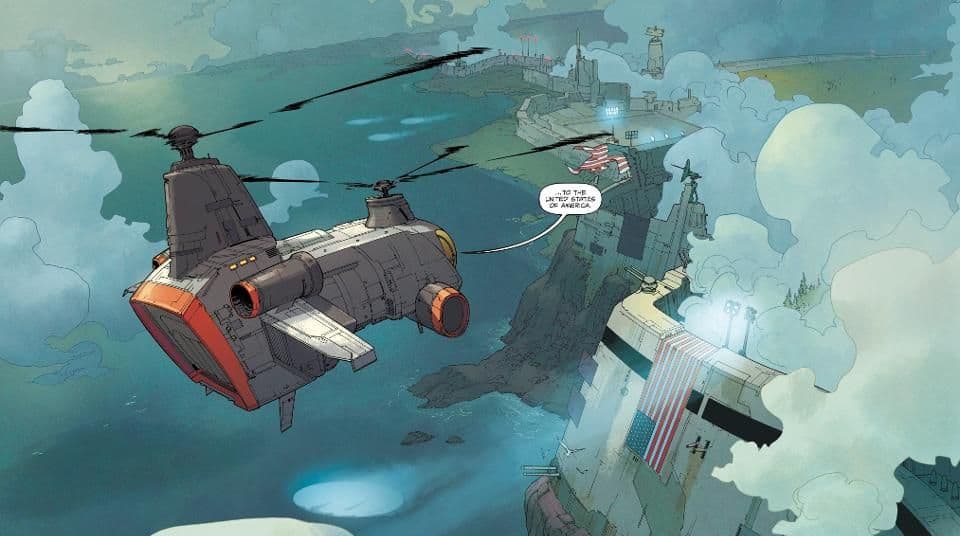 Without entering the realm of spoilers, this series seems to be a study in the dangers of the “echo chamber” writ large. Where the United States stands as a nation in present day creates an imperfect and terrifying “what if…?” scenario that the team plays out to a potential conclusion. There is an underlying political charge to the issue that will undoubtedly play a role moving forward yet manages to dodge the inherent traps of thinly veiled socio-political commentary. Rather than being overtly political the book veers instead into the realm of humanist (and perhaps post-humanism as well) in a delightfully worrisome manner. When you, dear reader, finally are able to join me on this journey, take note of the exposition. The entire story forsakes the typical expository narrative box, instead relying solely on dialogue to construct this world. That simple act grounds this baroque narrative into something honestly relatable against all odds.

Undiscovered Country #1 (Snyder, Soule, Camuncoli, Orlandini, Wilson) is nearly upon us and looks to be an exceptionally complex and gorgeous entry into the world of comics. Check out my Spoiler-Free review of #1 and be on the lookout for it, on sale 11/6!

Undiscovered Country #1: Come, Get Lost with Me (Spoiler-Free Early Review)